Although Rye was generally the most important of the intermediate stations on the route, Appledore was set to gain more traffic when proposals were put forward for a branch line between Dungeness and Appledore via Lydd. Finally, in 1881, the ''Lydd Railway Company'' was formed to undertake building of the branch and in 1882, also received Parliamentary approval for the building of another three-mile line to New Romney, spurring off the Appledore to Dungeness line just south of Lydd. The line to Dungeness opened for goods traffic on 7th December 1881, with passenger services commencing as far as Lydd on the same date. The latter were then scheduled to run all the way to Dungeness on 1st April 1883, whilst opening of the three-mile line from Lydd to New Romney occurred on 19th June 1884. A signal box opened at Appledore concurrent with the junction at this station, this being of SER design, located beyond the southern end of the ‘’down’’ platform. A four-lever ground frame cabin was also on site, this being located on the ‘’up’’ side, on the opposite side of the level crossing to the station. Despite becoming a junction on the opening of the Dungeness line, Appledore never received an additional platform to deal exclusively with the branch line traffic; trains to and from Dungeness and Lydd were served by the ''up'' side. Branch line services either ran straight through to Ashford or terminated at Appledore, the latter of which necessitated a reversing manoeuvre into the goods yard to avoid interference with the main line - it also allowed the locomotive to run-a-round. Stock was subsequently pushed into the ‘’up’’ platform and branch trains left for Lydd by means of crossing over the ‘’down’’ line.

Traffic was always light across the bleak marshes and once British Railways began a rationalisation policy of closing lightly-used routes, the days of the branch line to Dungeness and New Romney were numbered. The first casualties at Appledore were the signal box and ground frame, both going out of use on 27th June 1954, concurrent with the commissioning of a new cabin in-between the ‘’down’’ refuge siding and level crossing. The new signal box took over all functions of the previous cabins and was also able to automatically operate the traditional crossing gates; twenty-seven levers and a gate wheel were incorporated. Before this, the crossing gates had to be worked by hand, but could still be automatically locked by the original signal box. The next closure was that of goods facilities; these were withdrawn on 27th May 1963, but with the shed subsequently going into commercial use, it and the awning were spared demolition. This was followed in 1966 by the removal of the ‘’down’’ siding. Whilst it was good news for the ‘’up’’ side structures, the delightful clapboard waiting shelter on the ‘’down’’ side was not to be so lucky and by 1970, this had been replaced by a dreaded CLASP fabrication. Passenger services to Lydd and New Romney eventually ceased on 6th March 1967, but track remained in place between Appledore and Dungeness, although all stations were closed along the route. The branch to Dungeness, however, gained a new lease of life as a dedicated goods line: aggregate trains ran from a stone terminal at Lydd, and since 1975, nuclear flask trains have operated from the well-known power station out on Europe's largest area of open shingle. On 30th September 1979, the stretch of line between Appledore and Ore was singled, but the former retained two platforms to serve the double-track from Ashford. A couple of years before this, the track foot crossing between platforms was done away with and passengers were instead required to use the level crossing. A footpath had been carved out of the vegetation on the ‘’down’’ side to provide direct access to this platform. Circa 1985, the CLASP structure on the ‘’down’’ side was flattened and replaced by a much more appropriate timber shelter, albeit considerably smaller than the original clapboard building. In 1993, the 1954-opened signal box was closed and subsequently demolished as a result of a new panel coming into use at Ashford – by 2001, this controlled an area stretching all the way to Dartford. 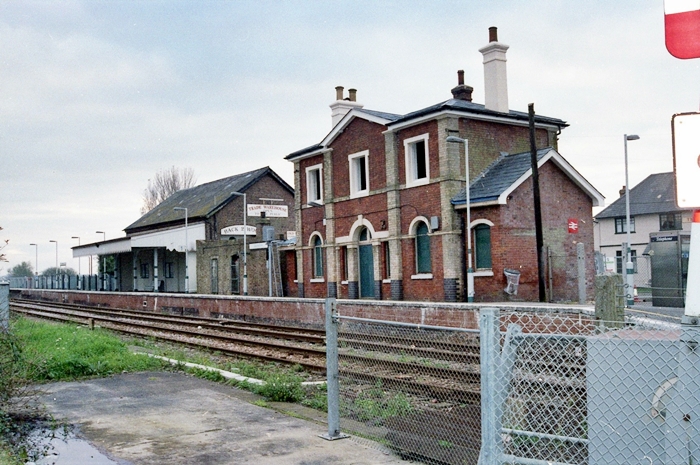 A classic scene at Appledore, with all of platform 1's original SER structures still intact and in sound structural condition. The symmetrically-patterned station building on the right was a typical SER structure, before the company began building stations more cheaply by the use of timber. The goods shed, on the left, is now a furniture warehouse, but even this retains its traditional SER-styled awning, albeit with two sections cut out to allow the signal to be visible. © David Glasspool 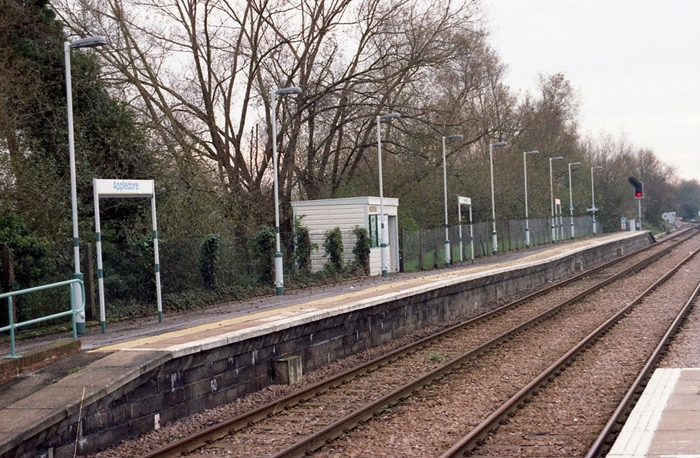 The former branch platform shown here has either been rebuilt or the façade brought forward by a new layer of concrete blocks - it was formerly brick. The quaint waiting shelter is also a later addition. It replaces the much more substantial timber-built structure seen on the first page. The unusual dip in the middle of the platform was a feature shared by the original brick platform. © David Glasspool 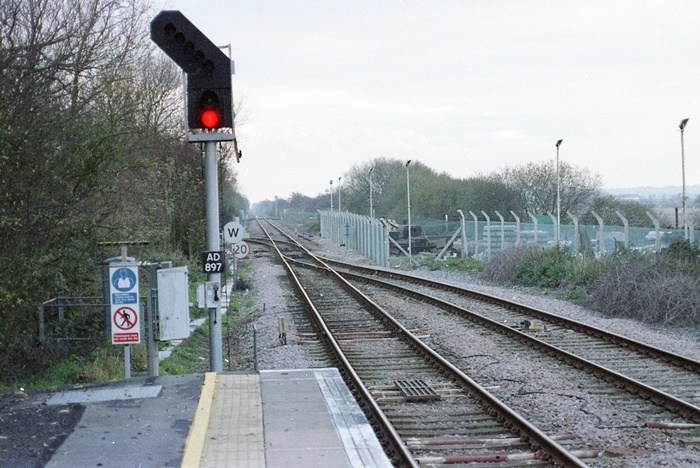 The single track branch to Dungeness can be seen veering off to the left, beyond the 20 MPH sign. The fenced off area to the right of the lines is home to a railway contractor and an area has been made available for the practice of laying and ballasting short sections of track. © David Glasspool 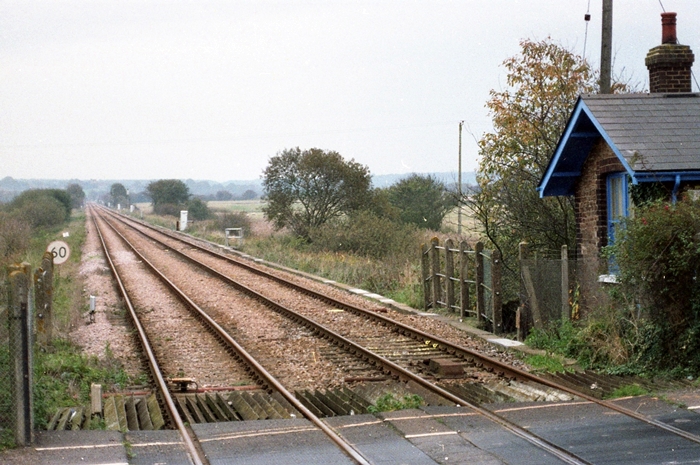 3rd November 2004 once again, this time viewing the now double track formation disappearing across the bleak marshland towards Ashford. A 60 MPH speed limit is indicated and the former level crossing keeper's building can just be seen on the right. © David Glasspool 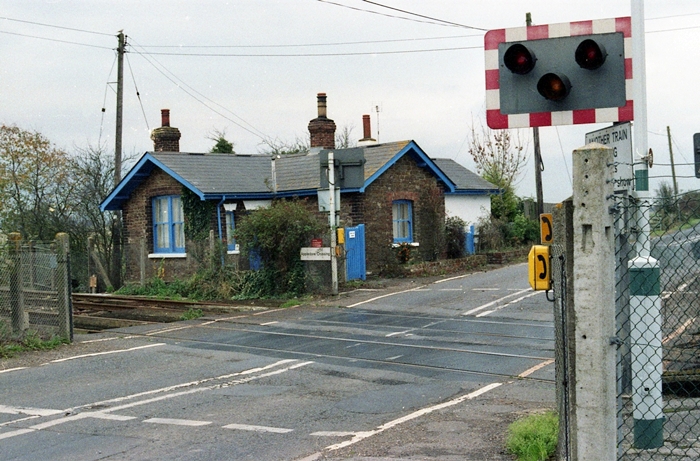 The level crossing is worked by automatic barriers, although these are controlled by a signalling centre at Ashford, rather than the former crossing building seen here, which incidentally is now a house. When Appledore still had an operational signal box, this crossing used traditional gates. © David Glasspool