On 29th July 1844 the ''Brighton, Lewes & Hastings Railway'' was authorised to construct a 32½ mile long railway line linking its namesake locations. During construction of the Brighton to Lewes section in 1845, the independent concern was absorbed into the ''London & Brighton Railway'', the latter of which became a fierce rival of the South Eastern Railway in a battle for lines in East Sussex. Previously, in 1845, when the Brighton to Lewes line was yet to be completed, the independent Brighton, Lewes & Hastings received Parliamentary permission to proceed with a single line extension from Lewes to Ashford (where a connection with the SER would be made), via Hastings. Naturally, this worried the SER, which had plans to construct a line to Hastings, branching off the Redhill to Ashford trunk route east of Tonbridge station and routed via Tunbridge Wells. Thus, the company tried to delay the proposals while it sought an alternative route to build, eventually suggesting a line from Headcorn to Hastings via Tenterden, but Parliament refused this concept on the grounds of strategic positioning. The London, Lewes & Brighton's proposed line followed a coastal route to Hastings and a railway in this vicinity was seen as an absolute must to allow the mass transportation of troops to the area, the coastline being vulnerable to attack and invasion from the continent. An agreement was finally settled on, with Parliament outlining that it would be more desirable for the SER to build and operate the section of line from Ashford to an area just west of Hastings, the London & Brighton constructing and operating the section thereafter to Lewes.

The L&BR completed the double-track stretch from Brighton to Lewes on 8th June 1846, whilst a further single-track section between Lewes and Bulverhythe (just to the west of Hastings) was opened to traffic on 27th June of that year. Meanwhile, the SER's line from Ashford to Hastings took a further four and a half years to complete as slow progress was made over the flat and decidedly bleak Romney Marsh. The SER was faced with steep gradients to overcome at either end of the marshes and opening of the line did not occur until 13th February 1851. Four intermediate stations along the sparsely populated course of the SER's line were provided at Ham Street, Appledore, Rye and Winchelsea, all coming into use concurrent with the opening of the route.

The village of Appledore was over a mile away from the station purported to serve it, in a bleak area of Romney Marsh. Despite this, the station structure, positioned on the ‘’up’’ side, was an impressive one, consisting of a two-storey brick-built building of symmetrical appearance, designed by William Tress, well known for his work on the SER. The station was built in the era which preceded the SER's ''economical'' policy of just providing clapboard structures on all platforms. It is also worthy noting that the structure was of red brick constitution, rather than the more familiar yellow brick of the SER. In true SER fashion, the platforms were staggered, the ‘’down’’ one being host to a single-storey clapboard structure rivalling in size the example still in existence at East Farleigh. This timber building was quite extensive, incorporating a waiting room and toilets, which seems to be a very uncommon trait for secondary waiting facilities. It seems strange that the ‘’down’’ side was not provided with the usual diminutive timber shelter, especially in light of toilet facilities already being available on the ‘’up’’ side. The canopy the clapboard structure demonstrated was also out of the ordinary, this looking oversized and replicating the design of the awning still attached to the goods shed - more of later. A feature which this station lacked from the outset and never acquired was a footbridge, a track foot crossing instead being in use between the ends of the staggered platforms.

It is now worth describing the goods facilities on offer at this station. An imposing, single-track pitched-roof goods shed was positioned behind the ‘’up’’ platform, separated from the station building by the single-storey structure housing the toilets. Although the station building was of red brick construction, the goods shed featured the more common yellow brick of the SER. It was the goods shed which provided the ‘’up’’ platform with its protection from the elements, an awning being attached to its eastern elevation. Once the station had become a junction, four sidings (including the goods shed track) and cattle pens were available for use on the ‘’up’’ side, whilst the ‘’down’’ side was host to a short storage siding, sandwiched in-between the platform and level crossing. 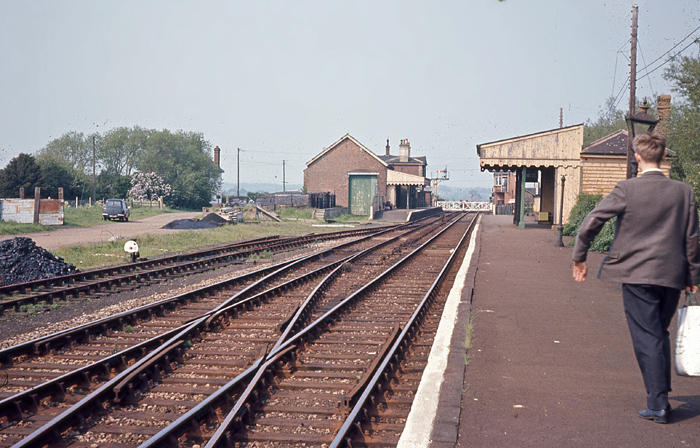 Looking towards Ashford, the level crossing gates can be seen closed against the railway, to the right of which is the signal box of 1954 and, to the left, the "up" starter semaphore. As evidenced here, the siding on the left had been cut back from the goods shed, public freight facilities having been withdrawn in 1963. Ashford and Hastings-bound platforms both sported virtually identical canopies at this time, these being attached to the goods shed and a large timber waiting shelter respectively. © David Glasspool Collection 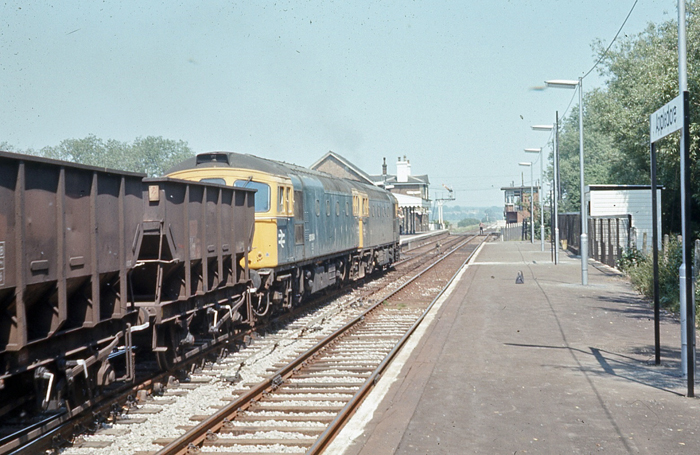 A pair of Class 33 diesels are seen leading a rake of 21-ton hopper wagons towards Ashford, most likely having originated from the stone terminal at Lydd. The starter signal shows "clear", the crossing gates are closed against the road, and the signalman can be seen at track level, awaiting the train's passage. Over the seven years since the previous photograph was taken, it can be seen that the sizable building on the Hastings-bound platform had been replaced by a small timber shelter. © David Glasspool Collection 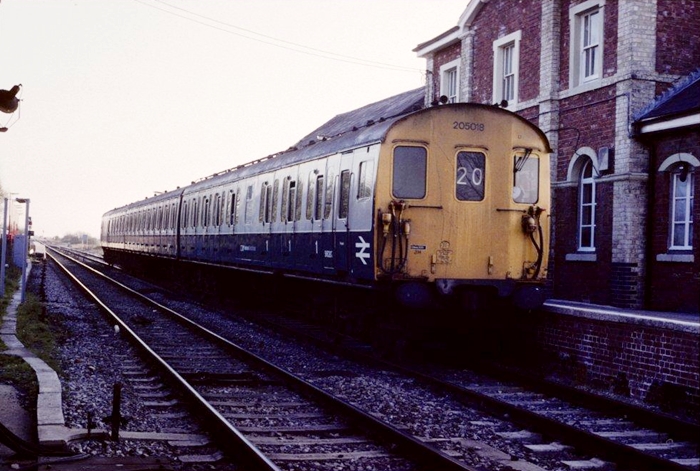 Hampshire/Berkshire DEMU No. 205018 is seen alongside the SER station building with a service from Hastings to Ashford. These are early Network SouthEast days, and this branding can just be seen on the carriage side. © Wayne Walsh 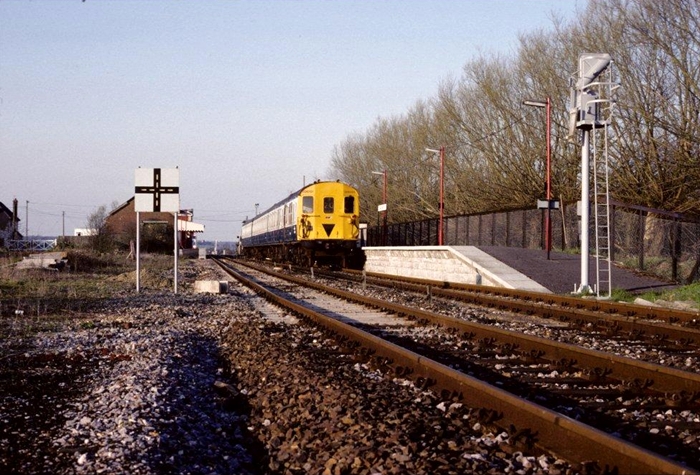 Heading in the opposite direction is Class 205 No. 205101, wearing BR Blue & Grey but with NSE ''flashes''. Here, we see a recently rebuilt ''down'' platform and, on the left, the former goods yard. The square sign with a black cross on the left serves as an advanced warning that a level crossing is ahead. © Wayne Walsh