Ashford has indeed a very interesting and varied history as a railway town, although the station is perhaps now more well-known to the typical passenger as an interchange point between domestic and international services, rather than for its illustrious past as a major railway centre. Ashford's connection with the railway can be traced right back to the late 1830s, at a time when the railway concept was still very much in its infancy. The capital's first station was London Bridge, having been opened on 14th December 1836 by the ''London & Greenwich Railway'', and this marked the beginning of the railway expansion into Kent (and, naturally, all other regions of Britain). By the mid 1830s Parliament were proposing the creation of three new major trunk lines to the south coast of England, namely to the towns of Brighton, Dover and Southampton, the latter two being very important ports on the English Channel. Interestingly, it was decreed that these three new railway main lines would be built in the order of east to west, thus a line between London and Dover commencing first. To undertake the task of building the line, a Bill was passed by Parliament in 1836 to authorise the formation of the ''South Eastern Railway''.

Previously in 1835, another independent concern known as the ''London & Croydon Railway'' had been established for the building of an 8½  mile line between the two named locations, spurring off the existing London & Greenwich route at Corbetts Lane Junction (Bermondsey). The company completed the construction of the line on 5th June 1839, establishing their own terminus station adjacent to the London & Greenwich's London Bridge. In their endeavour the London & Croydon Railway had provided the first railway access to London from a southerly direction and this would latterly become part of the first major trunk line to Dover, via Ashford. Meanwhile, construction on the main route to the Channel port by the SER had commenced in 1837, but what soon became apparent was the fact that the new line would actually have to begin at Redhill, joining the existing line of the London & Croydon Railway. Parliament had decreed that only one railway line entrance from the south was required, thus the South Eastern would be forced to run its trains over foreign metals on the completion of its route.

Work on the Reigate Junction (Redhill) to Dover route was split up into several stages which would be constructed by permanent way teams concurrent with each other. The first rails were laid at Ashford in 1842 and the town finally received its first revenue-paying customers on 1st December of that year, acting as a terminus until the line was opened further east to Folkestone in June 1843. Shortly after arrival at Ashford the SER built a large locomotive works and a four road through shed to the south of the running lines, this only being the beginning of Ashford's importance as a major railway centre in the south east. The complex was built on a 185 acre site acquired by the company and the new works was intended to be a direct replacement of the existing establishment at New Cross, South London, where land was considerably more expensive to purchase. In February 1844 the SER began running trains all the way to Dover, but the railways around Ashford were still very much expanding and as soon as 23rd May 1844 the SER had acquired Parliament's consent for the construction of another line, this time to the Thanet towns of Ramsgate and Margate, beginning at Ashford. The new Thanet line had reached Ramsgate by April 1846 and was subsequently extended to Margate in December of that year, passenger services commencing to the latter on the 1st of that month. Although the SER enjoyed a monopoly of Kent for some time, the fledgling London Chatham & Dover Railway would soon pose a great threat to the company.

By July 1861 the LC&DR had reached Dover and thus provided an alternative route from the capital to the Kent Coast, which in fact was more direct than the circuitous line of the SER. The LC&DR's expansion continued and soon the company found themselves constructing another line into SER territory, this time to Ashford. The line was originally inspired by an independent concern known as the ''Sevenoaks Railway'', which constructed a nine-mile long line from the LC&DR's Dover route at Swanley, to the growing market town of Sevenoaks (the line terminated on Sevenoaks' outskirts at Bat & Ball Station). Shortly afterwards the independent company undertook the construction of another line which spurred off the Bat & Ball route just south of Otford, this of which was bound for Maidstone. Another line extension from Maidstone to Ashford would soon take place, but once again undertaken by another independent company known as the ''Maidstone & Ashford Railway''. Ashford received its second independently-run railway in July 1884 when the Maidstone & Ashford Railway completed its line from Maidstone to Ashford's outskirts, a terminus station being established at the site. Both the Sevenoaks and Maidstone & Ashford Railways were soon absorbed into the LC&DR and the line remained unconnected to the SER establishment at Ashford until a spur between the two lines was completed in November 1891. 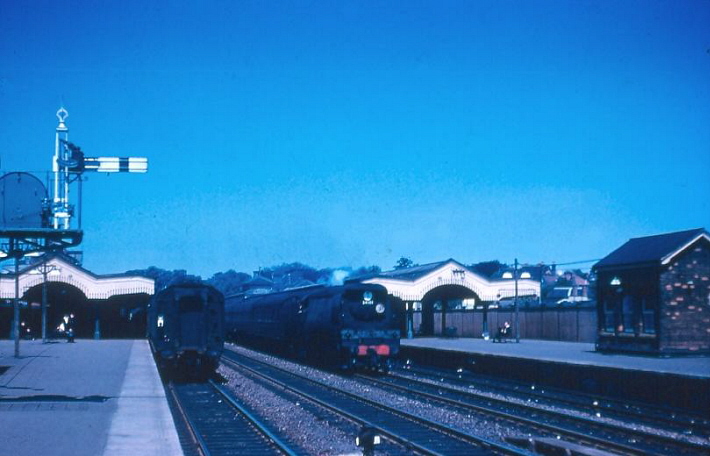 with a non-stop boat service. It was in this year that the locomotive was rebuilt in its de-streamlined form at Eastleigh.

It was redeployed on the South Western Division after the electrification of the Kent Coast lines. At this time, Ashford

station was sporting a joint SER and SE&CR guise. The station buildings were of SER origin, but the delightful canopies

seen here were SE&CR additions - they are contemporaries of the SE&CR canopy still in evidence at Margate. When

the station saw its first major rebuild in 1962, the canopy frameworks actually survived, but were clad with dreary 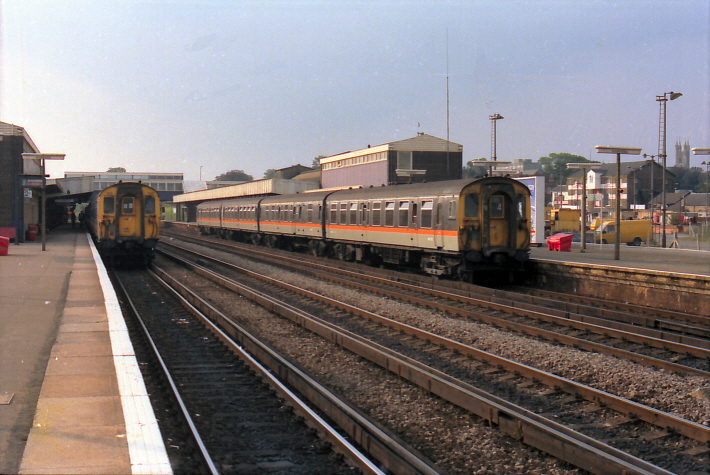 John Horton has kindly submitted this picture of Ashford, showing the form the station took as part of the Kent

Coast Electrification works. Taken from exactly the same viewpoint as the first picture on this page, the station

Charing Cross to Margate service. On the left is 4 Cep No. 1513, awaiting attachment to another unit. Notice

the upward-slanting canopies, which are in fact the original SE&CR examples seen in the first picture, but now

clad with plain asbestos. A new glazed footbridge and booking office came into use across the tracks at the

London end of the layout, parallel with the road bridge, and these can be seen in the background. The conversion

of the outer platform terminating lines into loops necessitated the demolition of the original SER station buildings. 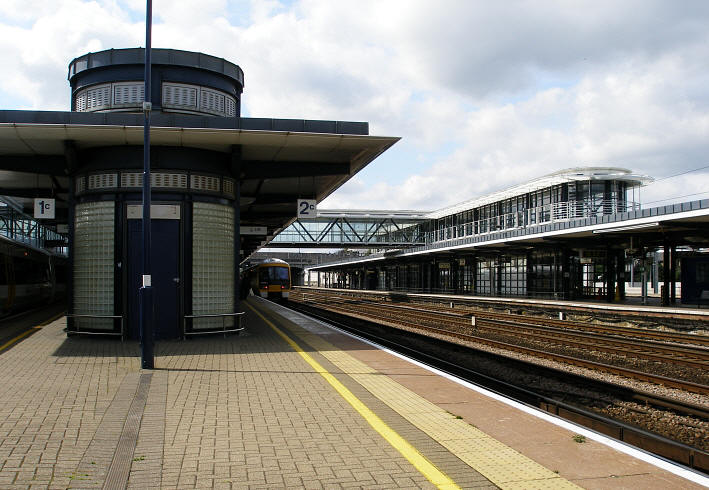 We now fast-forward another twenty years, and see yet a third station design upon the very same site. Private funding

for the station rebuild was agreed in December 1993, and formal completion of the new structures came in 1995,

international services using the platforms in the following year. A noticeable emphasis was put on airport terminal

design, to enhance the ''international'' feel of the station. Indeed, the site does have a ''continental'' feel about it,