The station opened on the Strood extension of the South Eastern Railway's first branch line from Paddock Wood to Maidstone, on 18th June 1856. Like its marginally older counterpart at Wateringbury, Aylesford was somewhat spectacular within the confines of the SER network, both its design and stonework being very untypical. Its gabled splendour is more akin to those stations which were later opened by the LSWR in July 1860, between Salisbury and Exeter, whilst the main building stonework gives a very ''Isle of Purbeck'' ethos about the site, although the railway at Aylesford predates that at Swanage by nearly three decades. Evidently, the station was built in sympathy with the substantial ruins of the local Aylesford Priory, certainly a far cry from the usual clapboard structures which later became customary for most SER establishments. Of course, the building materials did not come from Dorset, but rather nearby Maidstone, where a derivative of sandstone – namely ''Kentish Ragstone'' – was extracted. This material has been used for buildings since the Romans settled in the country, although it had originally formed in the area some 120 million years ago. ''Caen'' stone dressings were incorporated into the elaborate station (''Caen'' named after the city in northern France), but the chimneys were made of a much more familiar SER material: yellow brick. As usual with stations of the period, no footbridge was provided from the outset, a track crossing being in use instead, but a lattice structure did finally appear a year before the SE&CR's formation.

The first signal box here was located to the west of the station building, on the ''up'' side, constructed wholly of timber and was at ground level. This was then superseded in about 1928 by a more robust Southern Railway design at the eastern end of the ''up'' platform, constituted mostly of brick, but still retaining a traditional appearance. The ''down'' platform is particularly interesting for two reasons: firstly, it was extended by the SE&CR at its western end with wooden planks, supporting a concrete surface, exactly like the northern end of the ''down'' platform at Snodland. From platform level, the extension could be distinguished by the wooden fencing separating it from the goods yard - the original platform was backed by a brick wall. Secondly, this platform's waiting shelter was also of a curious design: it was clapboard, but its roof was perfectly horizontal rather than being angled like most other such structures. Freight facilities here were situated to the north of the platforms, on the ''down'' side, and consisted of a large single-track goods shed (replicating the design of those examples at both Snodland and Gravesend Central) and a loop siding, sandwiched between this building and the platform. The goods shed was also a through affair. The ''up'' side was host to a westward-facing loading dock siding, which terminated beside the station building.

The Southern Railway proposed linking the Medway Valley Line with the ex-LC&DR route through Maidstone East, by means of a line between Aylesford and Barming stations respectively. However, the project was abandoned in light of the steep gradients involved in building and operating the line. This company also replaced the aforementioned wooden platform extension with prefabricated concrete. The full electric timetable began on 12th June 1961, and decline of the actual station began seven years later with the removal of the tall chimney stacks - this was very common during the 1960s for many elaborate stations, whatever the region. However, at least the goods shed remained in railway use for a longer period of time than most of its counterparts on the South Eastern Division: it went out of use on 2nd December 1974. Aylesford did experience a period of neglect, but a revival in its fortunes occurred during the Business Sector era of British Rail, when many stations on the railway network were rejuvenated (and conversely, other historical structures still obliterated). 1986 marked the beginning of a two-year restoration programme on the dilapidated station, which included the return of the brick chimney stacks and complete renewal of the roofing. This was in addition to the mixing of new cast stone to replace and repair parts of the ornate walls, and removal and restoration of the severely rusted window frames. The project cost £231,000, most of which was funded by British Rail, although the Railway Heritage Trust contributed a significant £75,000 to this total. The Trust was a British Rail innovation and since its 1985-formation, the nationalised organisation provided much funding for it, each year allocating approximately £1,200,000 to its needs. 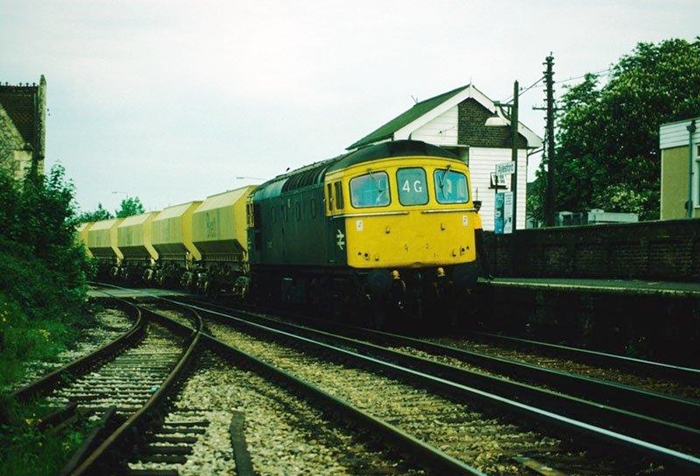 A Class 33 is seen trundling over the level crossing with the Allington to Hither Green empty Brett hoppers. Behind the locomotive can be seen the 1928 signal box, a concrete bracket lamppost and, to the left, the  ornate crossing keeper's house. The latter was built in the same style as the main building. The track branching off in the foreground, to the left, once led to the goods yard. © Wayne Walsh 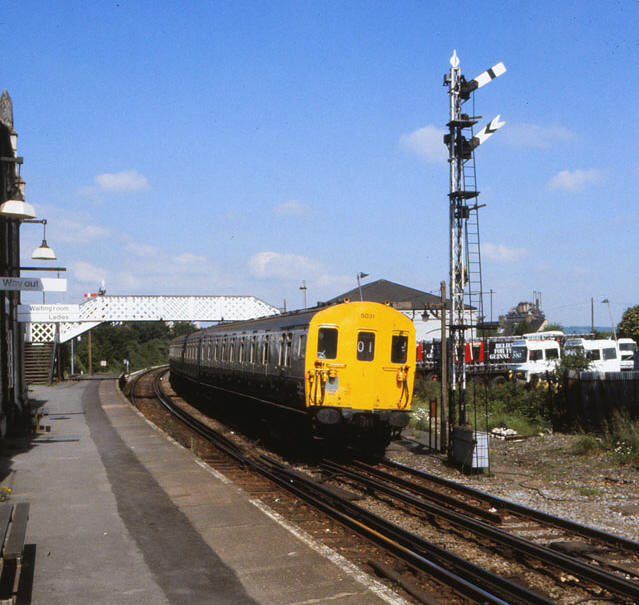 During 1984, 4EPB No. 5031 was witnessed forming the Strood to Maidstone West shuttle service. Of important historic note are: 1) the goods shed, which can be seen behind the EMU. Exactly the same design was once in use at Snodland; 2) The BR (S) lamp shades, affixed to the station building; 3) The semaphore signals, which finally had their swan song in 2005. © Chris 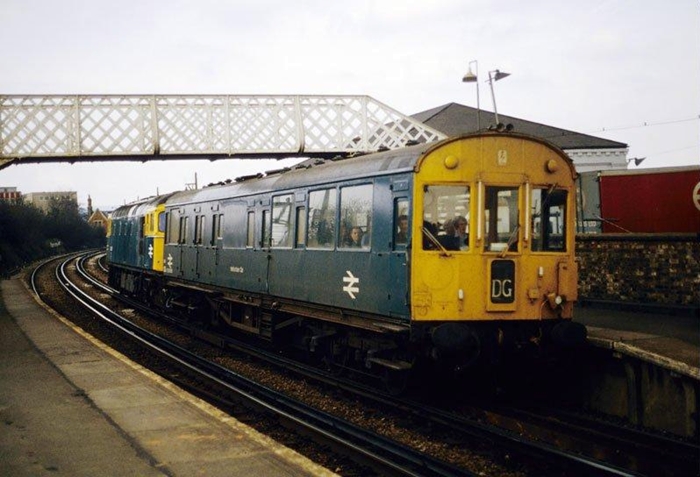 A Class 33 is seen propelling ex-passenger stock in the form of Maunsell coach No. DS70155 past the ''down'' platform. This vehicle, which was built to the restricted Hastings line gauge, had been an inspection saloon since 1962 and on this occasion, was being used to train guards. The ''DG'' headcode stood for ''Division Guards''. © Wayne Walsh 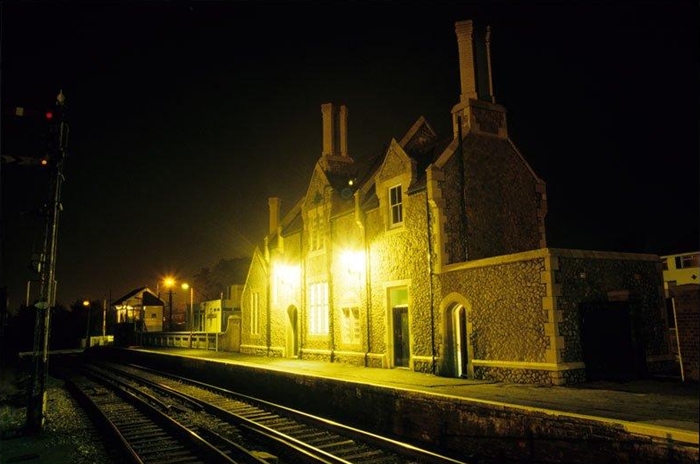 The fine station building is seen shortly after restoration, by which time most of the structure had been let out for private use. The splendid lamps affixed to the wall did not last long: they were soon stolen. © Wayne Walsh