Within the confines of the Otford to Maidstone East line, which opened on 1st June 1874, this is an unusual station. The interest here concentrates on the main building; the basic design principles which were used to create the masterpieces at both Borough Green and West Malling seem to have been applied, but only in part. It is worth noting that both of the aforementioned stations have a single-storey appendix jutting out their sides, which finishes with a pitched-roof affair perpendicular to the main two-storey structure. Appendices such as these appear to be a standard LC&DR feature, for they appear on this company’s intermediate station architecture along the original ‘’Chatham’’ line (both Adisham and Sole Street surviving as good examples). At Barming, it would appear that the main two-storey building was excluded, and quite literally two appendices fused together, creating a quaint structure, perhaps more appropriate for the rural area it served. Whilst the main building, positioned on the ‘’down’’ side, could best be described as an amalgamation of the single-storey appendices from its westerly neighbours, the waiting shelter on the ‘’up’’ side was also non-standard for the original ‘’Sevenoaks, Maidstone & Tunbridge Railway’’. It was instead inspired by those earlier examples which had come into use on the Swanley Junction to Sevenoaks Bat & Ball route some twelve years earlier. In short, this was a hybrid of a station, but Barming did at least retain one conforming feature: the signal box. This was positioned at the eastern end of the ‘’up’’ platform, having been built by Saxby & Farmer. It was two-storeys high, constituted a brick base with the upper ⅔ of the structure being timber-clad, and although not opening with the station in 1874, was in place by the turn of the decade.

Goods provision here was as humble as the station itself. A pair of spaced-out, eastward-facing sidings were in evidence on the ‘’down’’ side, but the yard did not boast the single-track brick-built shed found at both Borough Green and West Malling. Interestingly, however, the siding nearest the running lines did have a short roof over it, this also covering the adjacent stack of coal.

On 2nd July 1939, electric services commenced from Otford Junction to Maidstone East (the original Bat & Ball branch having been electrified some four and a half years earlier). It was also in 1939 that Barming acquired one of the SR’s unenviable prefabricated concrete footbridges, this superseding the existing track foot crossing. The majority of stations along the Swanley to Ashford via Maidstone route received these – indeed, Eynsford lost is pleasant lattice footbridge in favour of one. Also in connection with the electrification, the platforms were lengthened in prefabricated concrete at their western ends. Little else changed at this isolated stop until after nationalisation. The first major act was the closure of the goods yard in December 1960, one of the earliest of such facilities to cease operation on the whole Swanley to Ashford route, second only to Kemsing. A significant feature which the station managed to retain was the ‘’up’’ side timber waiting shelter. During the 1970s, and indeed, even right up to, and including, the 1990s, many of these delightful wooden structures were done away with in favour of featureless – and inferior - bus shelters. The signal box was not to last, however: this was decommissioned in April 1982, when the operational area of Maidstone East panel was extended, concurrent with the abolition of semaphore signals. By this time, the concrete lampposts had given way to metal equivalents and the former goods yard had become a car park. 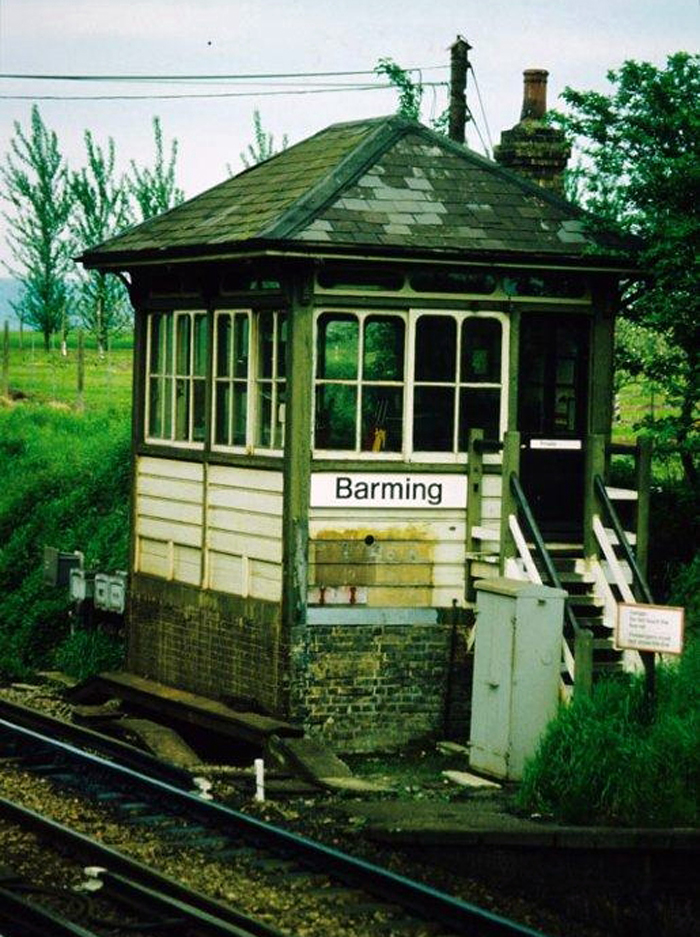 The charming Saxby & Farmer signal box, which once sat at the Maidstone end of the ''up'' platform, is seen nearing the end of its existence. It closed on 24th April 1982, when semaphore signals were abolished and new colour lights came into use, the latter controlled from the Maidstone Panel. © Wayne Walsh

Delightfully rural surroundings and a splendid complement of mechanical signalling: a Class 33 is seen on an "up" working from Dover Town Yard with a train which mostly consists of ferry vans of the VTG ''Cargowaggon'' type. © Wayne Walsh 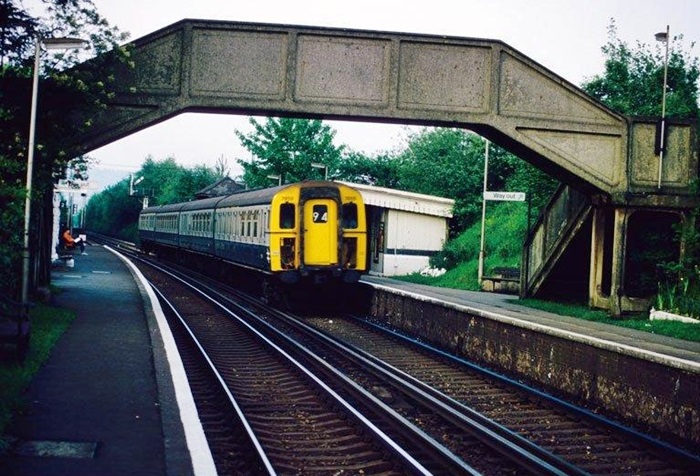 A 4 VEP is seen trundling into the station with a Maidstone East to Victoria service. Behind the unit can be seen the ''up'' home semaphore signal upon a bracket post, and the hipped roof of the signal box. © Wayne Walsh