The double-track line of the Compagnie du Chemin de Fur du Nord (Northern Railway Company) between Paris and Lille via Amiens opened on 20th June 1846, built to George Stephenson's 4-foot 8½-inch (1435 mm) standard gauge. This was 309-KM in length and, on the same day, a 30-KM branch from Douai (30-KM south of Lille) to Valenciennes was commissioned, the latter being the point where the Belgian "Southern Line" was joined. A 102-KM northward extension from Lille to the important port town of Calais was opened to public traffic on 2nd September 1848. From Calais was a 3½-hour Channel crossing on the ferry to Dover; thence, three hours on the fastest express train to London Bridge via Reigate Junction (Redhill).

Another French port town on the English Channel, Boulogne, had been reached slightly earlier, on 17th April 1848, under the auspices of the "Amiens & Boulogne Railway". This was on a branch from the Chemin de Fur du Nord at Amiens and had opened from there to Abbeville on 15th March 1847, to Neufchatel on 21st November, and finally onwards to Boulogne in the following year, at a length of 123-KM (76-miles). The line's construction was subcontracted to British engineering firm "Mackenzie & Brassey" and an important passenger ferry traffic was quickly established between Boulogne and Folkestone, which surpassed that of Dover as a result of quicker overall journey times between London and Paris. The route from London to Paris via Dover and Calais covered a distance of 552-KM (343-miles) at anywhere between 13½ and 16-hours. By comparison, via Folkestone and Boulogne, the route length was reduced to 452-KM (281-miles), completed in a much quicker 12-hours.

As the crow flies, Boulogne and Calais are 30-KM apart (19⅔-miles), but by rail, a very circuitous trip via Amiens and Lille was initially required. This was remedied when, on 1st January 1867, a 42-KM (26-mile) double-track line opened to passenger traffic between the two ports; freight commenced in the following April. In 1868, this line's expenses exceeded receipts by £34,280 - higher earnings in the previous year were attributed to exceptional traffic generated by the French Exhibition. Nevertheless, this quickly became the primary route for boat traffic from Britain via Calais, offering a considerably shorter journey time to Paris via Abbeville over the alternative line via Lille.

The route of 1867 was complemented by another double-track line, this time from Boulogne to St Omer, a distance of 53-KM (33-miles), which opened to passenger traffic on 1st June 1874. Built under the auspices of the "North Eastern Railway Company", it was hoped that this line would boost receipts by forming part of the shortest route across Northern France to Brussels, and provide an outlet for the region's beetroot sugar industry.

We now turn to the main subject of this piece, that of Boulogne-Tintelleries station, which serves the "Old Town", away from the harbour. It is situated upon the route of 1867 to Calais, but was commissioned over a quarter of a century later, on 1st May 1893. Tintelleries was an attractive station, approached from the south by the 511-metre-long Hauteville Tunnel, this of which was bored through Kimmeridge Clay on a 1/125 gradient. Immediately beyond the portal was an 80-metre-long stone-lined cutting, over which passed a road bridge of the same construction; on the other side of the latter commenced the station's two platforms. At the northern extremity of the site was the portal of Tunnel d'Odre, located 425-metres from the entrance to that of Hautville, similarly bored through Kimmeridge Clay and extending to a length of 960-metres.

Tintelleries' main building, situated on the Calais-bound platform 45-metres north of the road bridge, gave the station somewhat of a Mediterranean air. An imposing, but nevertheless attractive structure, it was two-storeys high and predominantly red brick in construction, measuring 19-metres-long by 8-metres-wide. The building's edges and window frames were frescoed with stone and the ensemble was topped off with an overhanging hipped tiled roof. A mildly upward-sloping canopy, 19-metres-long, was attached to the building's platform-facing elevation; that part of the structure which faced the forecourt was equipped with a 10-metre-long canopy of the same design, whilst around the side, on the southern wall, was an 8-metre-long canopy. Both platforms were linked by a subway and a series of barrow crossings; those pedestrians not using the station, but needing to cross the line, were provided with a lattice footbridge, this of which was situated on the Calais side of the station building. The Amiens-bound platform was equipped with a modest brick-built waiting shelter, located on the northern side of the aforementioned footbridge.

Within ten years of opening, the 8-metre-long canopy on the main building's southern wall had been taken down. On the Paris-bound platform, a second brick-built waiting shelter, sitting directly opposite the main building, had also emerged. This arrangement was fairly short-lived, for by around 1915, this shelter had been demolished. Additonally, the main building had received symmetrical single-storey extensions on either side and the 8-metre-long canopy on the southern elevation was reintroduced. This was further changed in the 1920s, when a single-storey hipped-roof brick structure was built on the Calais-bound platform, just south of the main station building. The timber hut which formerly occupied this space was shifted behind, to the edge of the station's forecourt.

On the merger of the country's independent railway companies, the French network came under the "SNCF" (Société Nationale des Chemins de Fer Français) umbrella from 1st January 1938, of which the government took a controlling interest of 51%. However, more significant upheaval was afoot: war was declared on Germany on 3rd September 1939, after the invasion of Poland, and continental boat traffic between British and French Channel ports ceased. As a result, the Calais to Boulogne route was deserted of the key boat traffic for which it had long been associated and worse was to come with the fall of France on 22nd June 1940. The entire SNCF network was now at the disposal of Nazi Germany.

In May 1940, fighting had inflicted damage at Tintelleries station. Between the platforms, part of the Paris-bound track had collapsed into a hole and the main building's roof had lost numerous tiles. However, by the end of the conflict, the station had not sustained serious destructive damage and even retained the lattice footbridge across the tracks. It was not until 1946 that regular cross-Channel ferry services resumed.

Modernisation at Tintelleries was enacted during the 1950s. The gap which separated the main building from the 1920s single-storey structure to the south was infilled with red brick. A shallow canopy, albeit in sympathy with the earlier station design, was fitted along the full length of this extension. Additionally, modern lampposts were installed along the platforms, but the retention of the main building and footbridge still gave this station a 19th Century air.

Steam haulage on SNCF formally ended on 31st March 1974, but it had disappeared earlier on the "Nord" lines, the last such trains having run in May 1971. Previously, in 1946, SNCF piloted a modernisation scheme which aimed to electrify a series of key routes, beginning with converting the Paris to Lyon line to 1,500 volts D.C. Electrification did not hit the Boulogne to Calais route until nearly half a century later and by that time, the heavy boat traffic which had for long plied the line was much reduced. The most famous of the boat trains, the "Flèche d'Or" ("Golden Arrow"), which ran from London Victoria to Paris Gare du Nord and return, via Calais, Boulogne, and Amiens (or, depending on season, the Channel ferry met the French portion of the train at Boulogne Maritime), last operated on 30th September 1972. The renowned "Night Ferry" which, prior to the opening of the Chunnel, was the only train whose carriages were transported with passengers across the water, ran via Dunkerque and Lille, rather than Calais and Boulogne. This service last ran on 31st October 1980.

In 1991, works commenced on refurbishing Tintelleries station, which was just shy of its 100th birthday. This included re-tiling the main building's roof and, more noticeably, the destruction of the extension to the south. The platform canopy was also renewed with a simple plain metal design, affixed to the original brackets - the footbridge had, by this time, gone.

As part of the Channel Tunnel project, which was ratified by British and French governments in February 1986, the shortest existing SNCF route from Calais to Paris via Boulogne and Amiens was to be eclipsed by a new high speed line. Named "LGV Nord" (LGV = Ligne de Grande Vitesse = High Speed Line), this was to leave the original SNCF lines just north of Paris, pass through Lille, and extend to the Chunnel portal environs at Calais. Construction of this line formally commenced on 1st November 1987 and regular TGV passenger services started running throughout its entire length on 24th September 1993. The route was equipped with overhead wires rated at 25,000 volts A.C. and, as part of this scheme, lines from Calais to Boulogne and Hazebrouck were electrified. 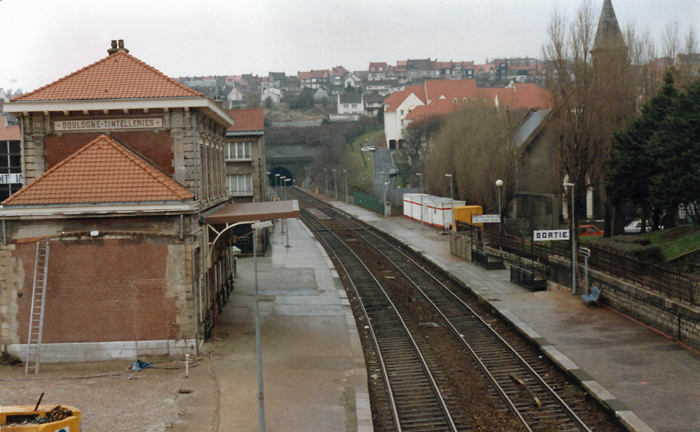 A Calais-bound view from the road bridge, immediately before electrification, shows the 960-metre-long Tunnel d'Odre in the background. The Amiens-bound platform, on the right, was devoid of any weather protection from the elements - even the subway steps, marked by "SORTIE" (exit), were exposed. Behind the camera, the line disappears into Hauteville Tunnel, beyond which the line reaches the 1962-opened Boulogne-Ville station. At the time of this photograph there was a third station which took the town's name, that of Boulogne Maritime. This station served the docks, but closure was enacted in January 1995 in response to the Channel Tunnel's opening. Boulogne had previously seen the withdrawal of Sealink's ferry service to Dover in 1986, compounded in January 1992 by the closure of the route to Folkestone. However, a "Seacat" service operated by "Hoverspeed" commenced between Folkestone and Boulogne in the following April. © Mike Glasspool 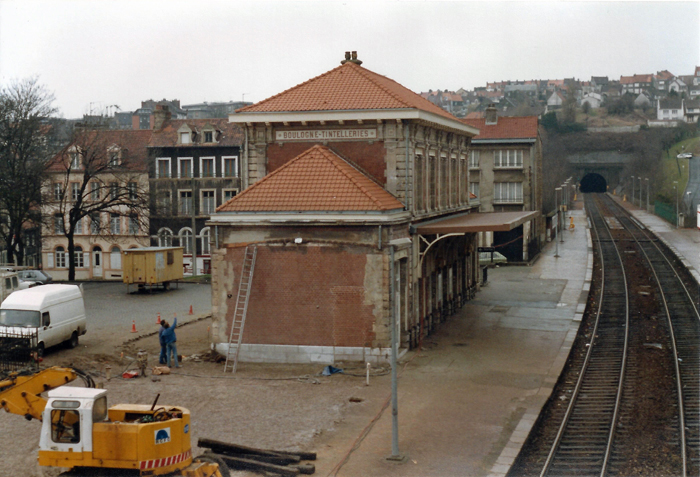 There was evidence of recent demolition work at the station. The space in the left foreground was formerly where the 1920s/1950s extensions of the original main building were situated - on close inspection, it can be seen that a doorway had only just been infilled with red brick. The main building was wearing a renewed canopy upon original design brackets, and a brand new tiled roof was accompanied by a vintage "Boulogne-Tintelleries" name sign, below the overhang. At their northern ends, the platforms pass over a road. © Mike Glasspool