The development of Brighton into a popular coastal resort can be traced back to 1750 when one Doctor Richard Russell published an informed book concerning the generally unknown qualities of sea water. The sea at Brighton, at the time known as ''Brighthelmstone'', was specifically recommended within the literature for both bathing use as drinking water. Naturally, this attracted much publicity and as a result of the alleged goodness of the area, Brighthelmstone began a period of rapid growth. A few years of considerable enlargement of the village - now more akin to a town - attracted Royalty and in 1787, the Prince Regent George authorised the construction of a large and impressive Pavilion at a cost of £500,000, further increasing Brighton's importance. Thereafter, Royal visits were frequent and a horse-drawn carriage service was initiated in the early 1800s between London and Brighton. This took some five hours in total to complete a one-way journey of just over fifty miles. Come the very early 1820s the railway, still in its infancy, was very much on the agenda and in as soon as 1823 plans were being put in place for the building of a line between Brighton and the capital, traffic between the two envisaged as potentially high. Six differing schemes from six rival individuals were then put forward to Parliament in 1835 for consideration. All these suggestions were, however, rejected by Parliament and despite further proposals re-surfacing in 1837, it was not until the formation of the ''London & Brighton Railway'' on 15th July 1837, by an Act of Parliament, that anything was set in stone.

The beginnings of the main line between London and Brighton actually lay with another independent concern known as the ''London & Croydon Railway'', established by an Act of Parliament on 12th June 1835. The company proposed to build a nine mile line between Corbetts Lane Junction (on the existing London & Greenwich Railway line) and Croydon, upon the route of an unsuccessful canal, the business of which was bought out by the railway company. On 1st June 1839 the nine mile line, costing £615,160, was opened by the London & Croydon, forming the initial section of what would later become the main line of the Central Division. Meanwhile, construction of the Brighton route to Norwood, the latter of which was on the London & Croydon's line, was underway, having begun on 12th July 1838. The forty-mile line was one which required a considerable amount of complex engineering as it traversed both the North and South Downs, necessitating long tunnels, a number of viaducts and large quantities of earth removal. The line took some 3½ years to fully complete and opening of the section of line between Norwood and Haywards Heath to passengers occurred 12th July 1841, the remaining distance to Brighton being bridged by a horse-drawn coach. Through tickets from London Bridge to Brighton were still available, despite the change in transport method. With much ceremony, the final stretch of line to Brighton was opened to passenger traffic on 21st September of the same year.

The beginnings of the impressive terminus station at Brighton, however, also lay with yet another line built by the same London & Brighton Railway company responsible for the construction of the main trunk route to London. A six mile double-track line from Brighton to the port of Shoreham was opened to passengers on the 12th May 1840. As a result, the London & Brighton carried some of the port's imported coal along their rails, despite the fact that such goods workings were heavily concentrated by the company at Deptford Wharf in South London. Construction of the station was concurrent with that of the aforementioned Shoreham line and the London & Brighton enlisted the services of architect David Mocatta to design the main building. This transpired to be a fine two-storey structure, Italian-inspired and priced at £12,000 in total; it eventually formed the main street façade to seven terminating platforms. These platforms were built with an appropriately-sized overall roof, but the impressive twin-span trainshed associated with today's Brighton is a later addition - more of later. The first carnation of Brighton station was completed by the opening of the main line to London on 21st September 1841.

A third route from Brighton had also been on the agenda since the formation of the London & Brighton Railway in 1837, that of an eastward route to Lewes. Parliament had approved this line's construction at a similar time to giving building consent for the London trunk route, but the London & Brighton became preoccupied with the latter and the undertaking did not materialise. Not all was lost, however, and another separate concern known as the ''Brighton, Lewes & Hastings Railway'' was established on 29th July 1844 to not only build a line between Brighton and Lewes, but to extend the original proposals to Bulverhythe, 2¼ miles to the west of Hastings. As construction began on the double-track section between Brighton and Lewes, the London & Brighton unsurprisingly absorbed the smaller concern, whilst shortly afterwards on 1st January 1846, the company also absorbed the London & Croydon Railway, thus renaming itself the ''London Brighton & South Coast Railway'' (LB&SCR). Now overseeing the construction of the line, Lewes was reached and opened to passenger traffic on 8th June 1846, terminating at a temporary station until the opening of the line further east. The Lewes to Bulverhythe section was subsequently opened to traffic on 27th June 1846, although unlike the stretch from Brighton, it was single-track rather than double-track. The South Eastern Railway had been granted permission by Parliament to construct the remaining 2¼ miles of the route to Hastings as part of its line from Ashford via Appledore and Rye. Both companies worked their respective stretches of the route, changeover between trains occurring at Bulverhythe.

The track plan in situ when visited in December 2004. I do not know of the line formation within the apex - it was being re-laid (or

so it seemed) at the time. Click to enlarge. As usual, scale is approximate. David Glasspool 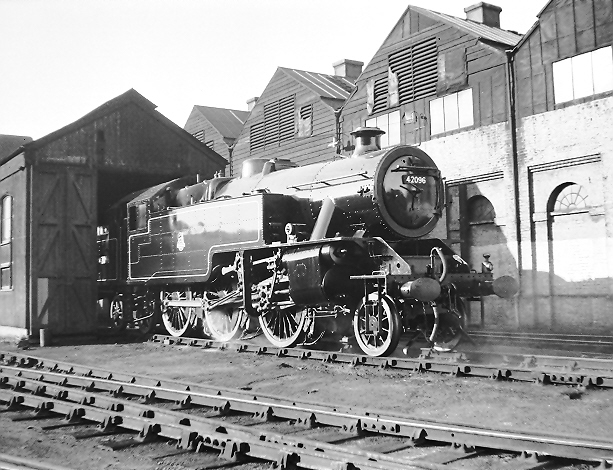 A sparkling clean Fairburn Tank, No. 42096, is seen emerging from the ''Weigh House'' at Brighton

shed in the early 1950s. The wall and pitched roofs behind the engine belong to the carriage cleaning

shed. The shed officially closed in 1964, although this particular locomotive had since been transferred 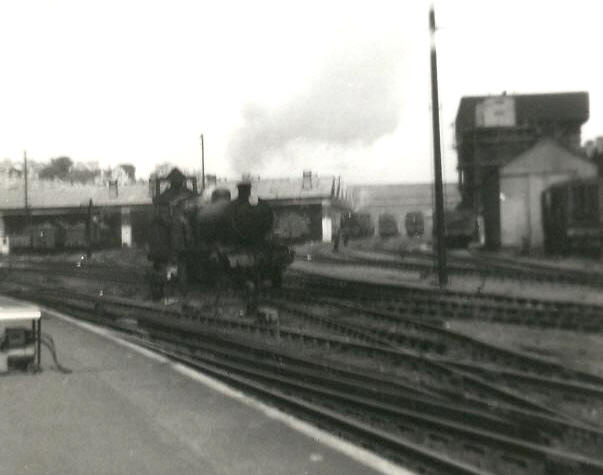 its way towards the platforms. The Weigh House of the previous picture can be seen on the right,

although the doors are now closed and a D3XXX series (Class 08) shunter now occupies the line.

Also worthy of note is the huge water tower on the right. Mike Glasspool 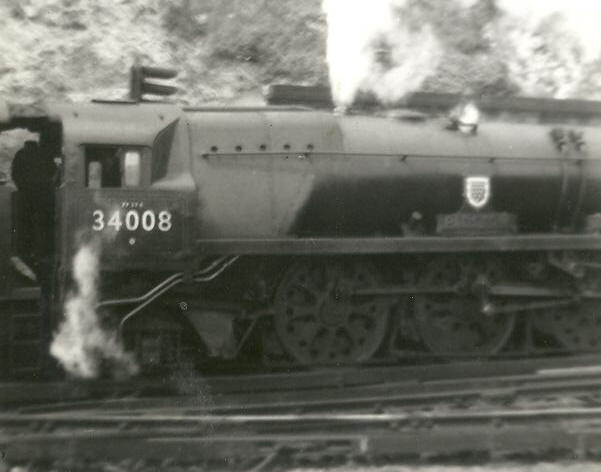 West Country Class No. 34008 ''Padstow'' was steaming up at the terminus in preparation for

fronting the 11am Brighton to Cardiff cross-country service. This locomotive would haul the

train as far as Salisbury, at which point a Western Region locomotive would take over and

continue along the remaining distance to Cardiff via Westbury and Bristol. Mike Glasspool