King Henry VIII set the foundations of the venerable Royal Navy during his reign of England between 1509 and 1547. Recognising the increasing threat from overseas, and indeed from just across the border in Scotland, the King procured the construction of a number of unprecedented and impressive warships to level the playing field. In the final year of the King's reign, the ''Navy Royal'' (as it was then called) began using facilities along the Medway at Chatham, and by 1570 a new purpose-built shipping yard had been completed. With the first ship being launched from the yard in 1586 and the moving of the dockyard to a new, larger site further downstream in 1613, Chatham would become a hive of activity and of great strategic importance for both Royal and Merchant Navies.

Of course, a railway branch appeared in the later years of the dockyard's history. A single-track standard gauge line spurred off the London Chatham & Dover Railway's Victoria to Dover trunk line at New Brompton (now ''Gillingham''), commencing operation on 16th February 1877. The branch was connected to the ''down'' line, but could only be accessed by trains travelling in the ''up'' direction. At the dockyard, the branch was met by a network of 18 inch narrow gauge lines of earlier origin, these of which remained horse drawn until the advent of the first narrow-gauge steam locomotives on site in 1871. This layout began being superseded by the more common standard gauge lines at the turn of the century and by the end of World War I, the narrow-gauge lines had become obsolete. The replacement standard gauge network was still akin to its smaller predecessor in nature: it was a large, complicated system, featuring tight turns negotiable only by the smaller tank engine locomotives with an 0-4-0 or 0-6-0 wheel arrangement. Tracks served the Royal Navy's shipbuilding yards and Numbers 1 and 2 Basins, whilst also linking with the Merchant Navy at Number 3 Basin.

The Royal Navy dockyard closed on 31st of March 1984, leaving Portsmouth, Plymouth and Portland Harbour as the last large military docking areas in the south, although Portland itself was finally decommissioned from military service on 31st December 1997. Despite the closure, the dockyard retained a large proportion of its standard gauge domestic railway network, particularly around and inside the former shipbuilding sheds, lines also extending alongside the Georgian-era structures. The docks in general, naval and merchant combined, covered an area of some 350 acres, naturally all of which was Ministry of Defence-owned. On closure of the Royal Navy establishment, the land was divided and scheduled for redevelopment, but fortunately not one which would result in the whole area being razed to the ground. The land south of Basins 1 and 2, which virtually accounted for the whole of the Georgian-era dockyard and later shipbuilding sheds, was earmarked for preservation and gained the status of a heritage site. This guaranteed the retaining of a good proportion of the dockyard railway network, enough to allow the practical operation of trains in the future. To further complement this, a number of resident railway locomotives had survived right up until the closure, including three saddle-tank steam engines and a variety of diesel shunters, in addition to a large collection of mobile railway cranes. Many of these items had been in store within the huge repair / building sheds, where much track was still in evidence.

The eastern dock area, which accounted for Basin 3 and the surrounding land, was to be retained for commercial shipping - an exit from this basin was located to the east, which avoided the scenario of ships having to pass through all basins when arriving and leaving the docks. Finally, the portion of the military dockyard located on St Mary's Island (considered to be less historic) was to be redeveloped into a housing estate. Despite these changes, a connection with British Rail would be maintained, although the line would now terminate alongside Basin 3. The branch was particularly useful during the redevelopment work, when trains were used to remove 600,000 tons of contaminated soil and asbestos between 1991 and 1993 inclusive. 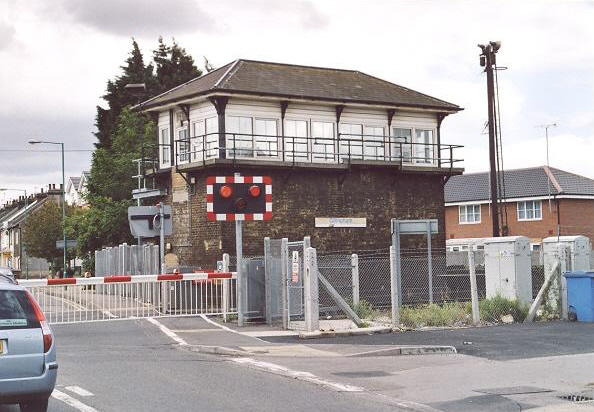 The Saxby & Farmer signal box at Gillingham looked solid when viewed on 31st May 2006.

Manual crossing gates were replaced with full automatic barriers and warning lights in 1974,

and thirty years later, the cabin's flight of stairs was relocated from the side, to the rear. 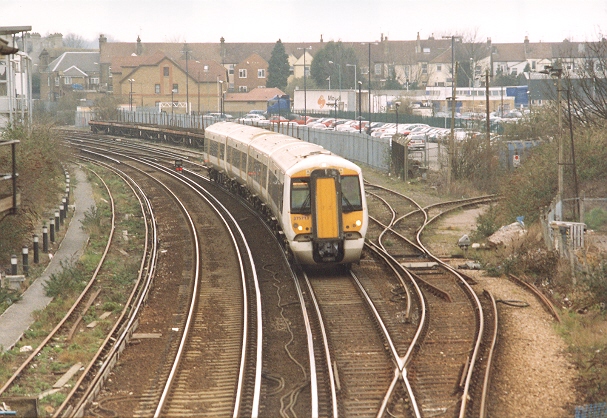 track line to the dockyard branching off to the right. Class 375 No. 375713 is seen passing the

branch connection and a trio of sidings, as it heads to Faversham. David Glasspool 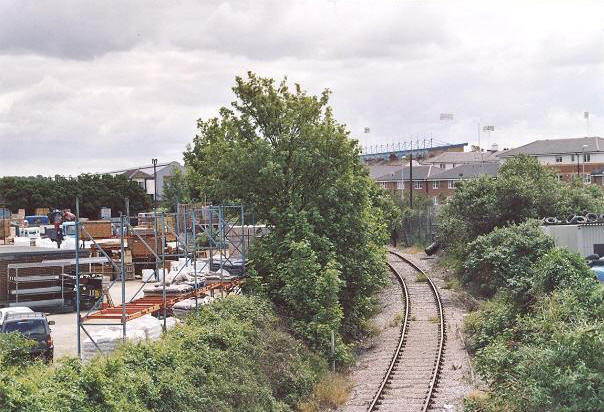 We are now observing the single-track branch from an over bridge. Gillingham's signal box can

be seen emerging on the left, as can the pitched roof of the depot, in this south easterly view