In the mid-1950s, British Railways' Southern Region was considering the development of an experimental locomotive which was capable of gaining power from two sources: third rail and a diesel engine. The majority of the Southern suburban network had been electrified by means of third rail installation, but several sidings and yards remained untreated. The proposal was justified by illustrating the remarkable flexibility of the locomotive: it would be able to haul both freight and passenger trains over the third rail system by means of a powerful electric generator and then, unlike EMUs, could continue over non-electrified stretches of line by switching its power source to an onboard, but much less powerful, diesel engine. Designing of the locomotive began in the late 1950s, the Southern Region's Civil Mechanical and Electrical Engineering (CM&EE) division undertaking the task. By 1959 the design was ready and the Southern Region put in an order for six of the experimental electro-diesel locomotives to be constructed, the assembly work being split between Ashford and Eastleigh, whilst English Electric were awarded the contract to manufacture the diesel engine and traction motors. Throughout 1960 and 1961, Ashford constructed the under-frames for all six locomotives, whilst Eastleigh was responsible for the manufacture of the body shell and the fitting of diesel and electric equipment once the under-frames had been delivered from Kent. The design employed had a 600 HP English Electric 4SRKT diesel engine (already being used in the Hampshire / Berkshire DMUs at the time) distinctly placed at one end of the frames, whilst allowing the remaining side to accommodate the electrical equipment, an arrangement which would reduce stresses on the frames. Completion of the first example came in 1962, the locomotive entering service on 1st February of that year. The remaining five builds emerged from Eastleigh in the subsequent months and by the end of 1962 it had been proved that a dual power locomotive was possible and practical. The Southern Region's CM&EE applied a unique set of design codes to all diesel and electric locomotives native to the Southern Region, the electro-diesels being classified as ''JA''.

The JA Class was less powerful than contemporary diesel and electric counterparts, its 600 HP diesel engine output comparing with the 1550 HP of the native Class 33 ''KA'', and its 1600 HP electric generator comparing with the 2500 HP of the Class 71 ''HA'' E5000 electric locomotives. Despite this, the JA Class was far more versatile and their success was emphasised on the ordering of another batch of locomotives to virtually the same design (only slight changes in traction motors being made), a total of forty-three being requested in early 1965. The second, larger batch was constructed in its entirety at the Vulcan Foundry, Newton-le-Willows by English Electric over a two year period, the first example being completed in October 1965 and released into service on 13th of that month. The change in traction motors permitted the English Electric-constructed locomotives to attain top speeds of 90 MPH, the original batch of six from Eastleigh demonstrating a lower top speed of 80 MPH. The modified batch received the usual classification unique to the SR, becoming ''JB'' class. The installation of a diesel engine with the same power output as the electric generator had been considered during the project's original inception, but it was latterly concluded that the locomotives would be far more expensive to construct in comparison to the arrangement eventually chosen, and much unnecessary weight and technical complication would be added.

In the early 1970s the Total Operations Processing System (TOPS) numbering was being implemented on motive power in a swift manner, the JA and JB Classes subsequently being re-classified as 73/0 and 73/1 respectively. However, after the sectorisation of 1982 there was yet another sub class to come. The fast Gatwick Express service from London Victoria became part of the Intercity Business Sector's operations and this marked the replacement of existing 4 VEG units (specially converted 4 VEPs) with rolling stock considered more suitable for the express service task, providing a greater level of comfort. Thus, a number of air-conditioned BR Mk 2 carriages were transferred from the Midland Region, having been displaced by HSTs, and were sent to Derby for conversion for use on a then new Gatwick Express push-and-pull service. In addition to this, nine motor coaches formerly of 2 Hap suburban EMUs were converted into Guard Luggage Vans to form one driving end of the train. For propulsion and to provide the second driving cab, twelve 73/1 locomotives were acquired to become a dedicated pool for the Gatwick Express. After modification for working in push-and-pull mode with the air-conditioned BR Mk 2s and GLV, the twelve locomotives were re-designated 73/2 and went into revenue-earning service on 14th May 1984. The dedicated Gatwick fleet were allocated to Stewarts Lane Depot, which had been the home to all Class 73s since their initial inception. The diesel engines of the Class 73/2s were no longer maintained after a short period, the route they traversed being fully electrified.

By 1980 the standard BR electro-diesel fleet had been restricted to a 60 MPH operating speed (re-gearing having taken place) - only those locomotives selected for the Gatwick Express operation in 1984 were later returned to 90 MPH running. The original Eastleigh batch of six Class 73/0s were due for withdrawal at the turn of the 1990s, but they were to gain a new lease of life. In 1992 they were transferred north to the country's only other third rail network in Merseyside, Liverpool (which, interestingly, was administered by Network SouthEast's office in Croydon!), where they were to undertake sandite duties. After privatisation, four were purchased outright by the Mersey Rail franchise, remaining in service until 2002 - two examples had been painted in the all-over yellow livery of the privatised division. After the September 2000 introduction of Class 460 EMUs to work the Gatwick Express service, Class 73/2s also began a steady decline on the former Southern Region network, a total of three out of the original twelve remaining in the dedicated Gatwick Express pool as of October 2004. Although all the Class 460 EMUs were in service by this time, at least one formation of the old Gatwick Express stock was in use every day, whether there was 100 % availability of the new units or not. Apparently, the set was always running whilst modifications and various exams are undertaken, in addition to covering for failed units. Official cessation of using the ''old stock'' came on 28th July 2005, but despite this, one set was reported still running in November of the same year. 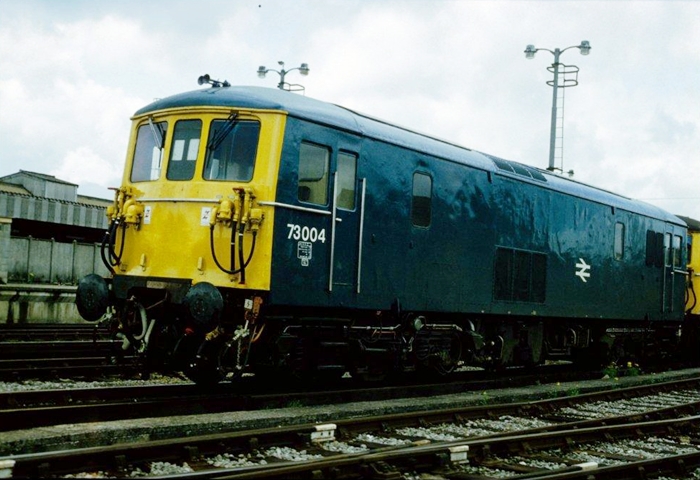 In splendid cosmetic condition, No. 73004 is seen in the sidings at Ashford. The locomotive was repainted into a light blue and yellow scheme in 1987 and named ''The Bluebell Railway''. It was one of the earlier withdrawals in September 1991, after a brief spell on the Merseyrail electric network. It was sold as a source of spare parts to keep sister No. 73003 going, and was eventually scrapped in February 2004. © Wayne Walsh 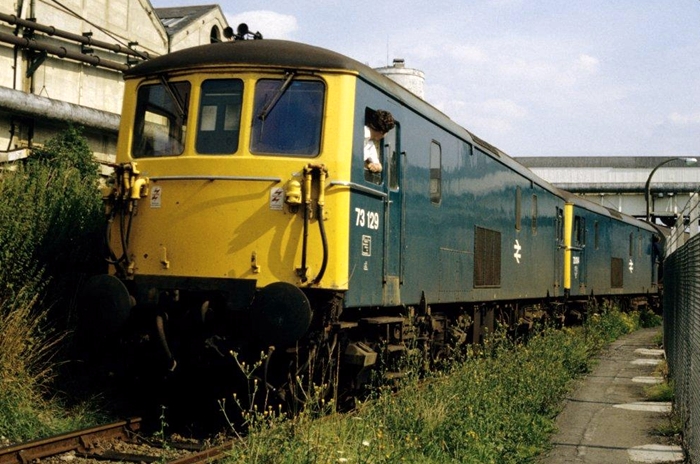 No. 73129 and a classmate are seen backing up at Reed Paper Mill, New Hythe, with a rake of tankers. Named ''City of Winchester'' in 1982, this locomotive had a spell with the InterCity Business Sector on Gatwick Express trains from Victoria. Later transferred to Network SouthEast, No. 73129 ended its days with EWS - still wearing ''Toothpaste'' livery - and can today be found preserved on the Gloucestershire & Warwickshire Railway.© Wayne Walsh 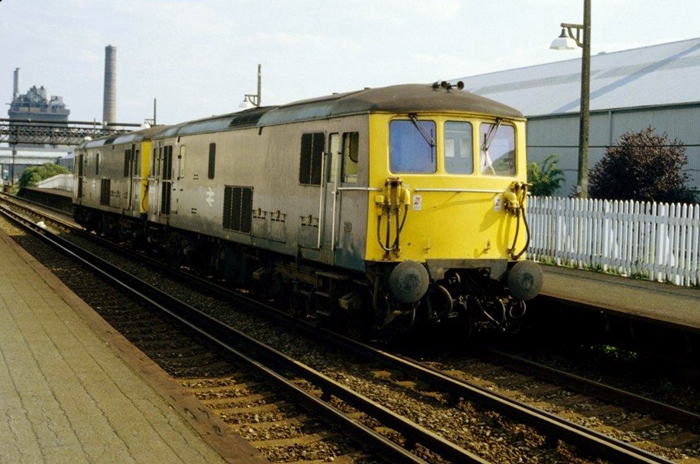