During the development of what eventually became the Class 373 ''Trans Manche Super Train'', British Rail (BR) had registered interest in pursuing a locomotive-hauled concept for daytime passenger services through the Channel Tunnel. However, with heavy French influence in the form of SNCF, a formation based on the highly successful TGV (Train à Grande Vitesse) was selected and indeed, this decision has proven its worth. However, all was not lost for BR's original idea and a specification was laid out for a brand new, highly advanced - but very expensive - electric locomotive for use on Channel Tunnel freight and overnight sleeper workings.

Eventually, the British Rail Board formally placed an order with "Brush Traction Ltd" at Loughborough on 22nd July 1990, for an initial batch of twenty electric locomotives for Chunnel operation. This same company had previously been awarded a contract worth £120 million in 1988 for the construction of one-hundred Class 60 diesels, followed in 1989 by an £89 million Eurotunnel order to build thirty-eight 7,724 HP electric locomotives for use on shuttle services between Cheriton and Calais Fréthun. Construction of the new locomotive was done in partnership with "ABB Transportation Systems" and, under BR's TOPS numbering scheme, became "Class 92".

Included within the specification for the Class 92 was the capability of being able to haul freight trains of up to 2,200 tonnes in weight, although it was envisaged that the heaviest typical load for Chunnel freights would be 1,600 tonnes. Additionally, power had to be sufficient to pull these loads whilst tackling the 1 in 90 gradient on the British exit from the Chunnel and when traversing the steeper climbs on the northern part of the West Coast Main Line (WCML). A Co-Co wheel arrangement (two bogies, each with three powered axles) was selected and the Class 92 was to utilise the fundamental body shell shape of the Class 60, in addition to featuring similar bogies. Thereafter, however, the similarities between the two types stopped. Firstly, the order would not have been overly popular with the Treasury, at £3 million per locomotive! Secondly, the body shell - manufactured and delivered complete by Procor, Wakefield (the same company having built that of the Class 60) - was packed with high-tech electronics. Some of these electronics had already been tried and tested on the Class 60, but others were wholly new breeds.

The complexity of the electrical systems was necessitated by Chunnel safety requirements, combined with alternate power supply and signalling infrastructure in Britain and France. On the continent, through the Chunnel, and on the WCML, the Class 92 fleet would be fed by 25 kV A.C. overhead wires, for which two panotgraphs - located at either end of the locomotive - were fitted. The provision of two pantographs was a Eurotunnel requirement, as was the duplication of most electrical systems on-board, to ensure that any electronics failures did not leave a train stranded within the tunnel. Between the Chunnel portal and WCML, the locomotives would be traversing the 750 Volts D.C. third rail network of BR's Southern Region, for which twelve collecting shoes were fitted. The fleet was equipped with Electric Train Supply (ETS) to provide power to the carriages of the proposed continental sleeper service, which had been christened "Nightstar".

Three different signalling systems presented themselves: BR's Automatic Warning System (AWS); Eurotunnel's Transmission Voie-Machine 430 (TVM 430); and SNCF's "Crocodile" train protection system, the latter used on the so-called "classic" French lines. The Class 92 was equipped with the former two: since it had been decided that the fleet would travel no further than Calais on the French side of the operation, SNCF agreed to install BR's AWS at Fréthun and through to Calais Ville station. The latter was where "Nightstar" sleeper trains would reverse and traction exchange take place between Class 92s and the domestic SNCF fleet. Provision was made for any future installation of Automatic Train Protection (ATP).

After repeat orders, there were forty-six electrics scheduled for completion, totalling a whopping £138 million. Ownership of Class 92s would also be split between three operating bodies:

"Railfreight Distribution" (RfD) was a British Rail business sector which had been formed in October 1988 on the merger of "Speedlink" and "Freightliner" operations. "Speedlink" covered traditional freight workings, where individual wagons from dispersed locations were formed into complete trains at a single hub for onward working; "Freightliner" dealt with containerised traffic. Splitting freight into dedicated business sectors was seen as making the prospect of goods traffic by rail more attractive to potential customers, and RfD was to handle those flows which traversed the Chunnel. European Passenger Services (EPS) was set-up in November 1990 to develop passenger services - daytime and night - through the Chunnel, and was a wholly-owned subsidiary of the British Rail Board. SNCF initially considered developing its own separate fleet of locomotives for Chunnel working, but it was later decided that it would be more cost effective to use a common pool of motive power. 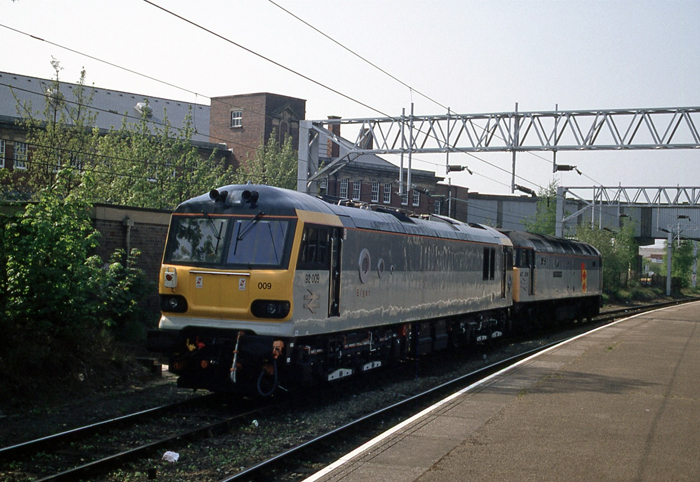 Crewe-bound, brand new No. 92009 "Elgar" is seen being dragged through Stafford by Class 47 No. 47206 "The Morris Dancer". It was not until 1998 that the type was permitted to run under its own power on the West Coast Main Line. © David Glasspool Collection 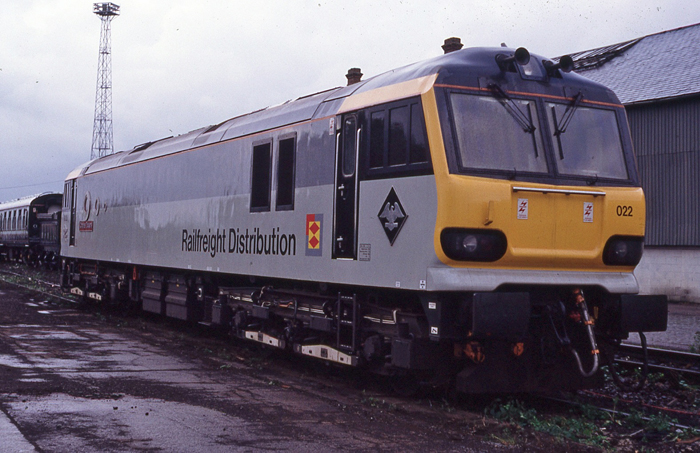 Your author can think of only two Class 92 locomotives which received the "Railfreight Distribution" legend on the body sides and cast nameplates: No. 92022 "Charles Dickens" and No. 92030 "Ashford". No. 92022 is pictured above during an open weekend at Crewe Basford Hall. © David Glasspool Collection 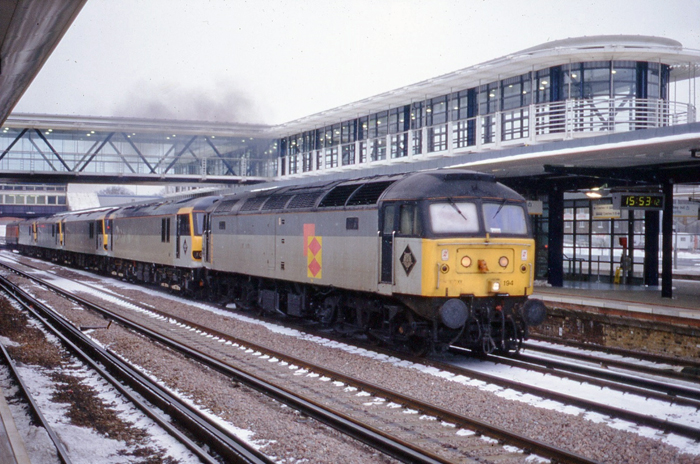 A standard working of the era. Class 47 No. 47194 is seen hauling four brand new Class 92 electrics through the newly-christened "Ashford International" station. The Class 92 fleet was not yet authorised for third rail operation, so between Wembley and Dollands Moor, locomotives had to be diesel-hauled. At the end of the formation is a BR Mk 2 coach in the red and blue colours of the Railway Technical Centre, Derby. © David Glasspool Collection 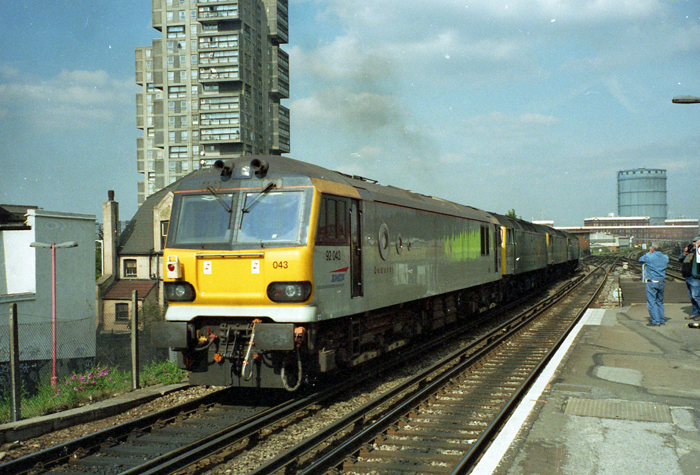 All locomotives were finished in two-tone grey, which had become a familiar scheme on the fleets of the former British Rail freight business sectors. Here, SNCF-owned No. 92043 "Debussy" is seen being dragged through Wandsworth Road by three RfD Class 47 diesels, heading to Wembley. The owner's logo can be seen on the cab side, below the number. The name, as per most of the class, took the form of a transfer. © David Glasspool Collection