1992 proved to be a big year for the ‘’Kent Link Networker’’ programme. On 31st March, a further 47 Class 465 units were authorised, and on 10th of the following month, it was announced that construction had been awarded to the now privatised BREL. On 1st April, Class 465 No. 465202 arrived at Slade Green Depot, becoming the first unit to be allocated there. On 11th August, unit Nos. 465001 and 465004 paired up to form the first passenger working of the type from London Cannon Street. This was not a normal scheduled service, but rather a run for the railway press, which travelled to Sevenoaks. The first units to enter ‘’normal’’ service were Nos. 465214 and 465215, without ceremony on 13th October 1992. The new ‘’Kent Link Networker’’ services were not officially launched until 1st December of the same year, when the Secretary of State for Transport attended a ceremony at London Cannon Street.

What happened to the ‘’main line’’ variant of the South Eastern Division ‘’Networker’’? Detailed plans of this had emerged in 1991, which outlined the development of four- and six-vehicle units under the designation of ‘’Class 471’’. As mentioned earlier, this class was to replace the 4-VEP fleet on Kent Coast workings, and had a seating arrangement to reflect this. Delays in the existing Class 465/466 production had pushed the ‘’main line’’ project back, and a 1994/1995 delivery looked unlikely. To ensure a constant flow of new stock, the decision was taken to scrap the Class 471 scheme, and instead push ahead with a somewhat watered-down version involving an additional batch of modified Class 465 units. ABB (formerly BREL) took No. 465037 and modified two vehicles internally to demonstrate ‘’main line’’ style seating, suitable for Kent Coast services. The unit was briefly renumbered 465301 and put on display at Waterloo between 13th and 15th July 1993 inclusive. In November of the following year, the unit was diesel-hauled to the former Eastern Region, for gauging trials. It was proposed that these units would be used on services from Kings Cross to Cambridge. Eventually, the modified Class 465 units were found to be the solution, and the Class 471 project for the Kent Coast lines morphed into the Class 365 ‘’Networker Express’’.

31st March 1994 marked the last ‘’proper’’ day of NSE operation. From 1st April, the entire Business Sector was operated as several ‘’shadow’’ franchises in the run-up to privatisation. The infrastructure became the property of ‘’Railtrack’’ on the same day, which was Government-owned until being floated on the London Stock Exchange on 20th May 1996. The rolling stock was sold to leasing companies: the BREL Class 465 units eventually came under the ownership of HSBC Rail, and those of GEC-Alsthom (including the Class 466 fleet) became the property of ‘’Angel Trains’’ (so-called because the company was based in Angel Islington).

The ‘’South Eastern’’ shadow franchise was privatised on 13th October 1996, and the train services became the responsibility of the ‘’Connex Group’’, which re-branded the entire operation ‘’Connex South Eastern’’. In 1997, the company started to apply its own ‘’Connex South Eastern’’ branding to all sixteen of the Class 365 units allocated to Kent Coast services, and to Class 465 Nos. 465001 to 465003 and Nos. 465006 to 465020. This simply involved eradicating the red NSE stripe along the body sides and sticking a continuous yellow vinyl stripe below the windows. The yellow vinyl stripes were apparently ordered to launch the new Class 365s in Connex colours, with surplus layers being applied to the Class 465 units mentioned. From 1999, new ‘’main line’’ units in the form of Class 375 ‘’Electrostars’’ were introduced on Kent Coast routes, and a new standard ‘’Connex’’ livery was adopted. In general, this featured an all-white body shell, with black window surrounds and yellow doors. From 2002, this livery began being applied to the ‘’Networker’’ fleet, starting with unit No. 465021. At this stage, all internal fixtures and fittings remained in NSE colours.

The ‘’Connex South Eastern’’ franchise ended prematurely on 8th November 2003, and until it was re-let to another company, an interim Government-run operation was set up. This became ‘’South Eastern Trains’’, and ‘’Connex’’ markings were removed from all units. Train repaints thereafter continued to follow the existing black, white, and yellow livery pioneered by the previous franchise holder. 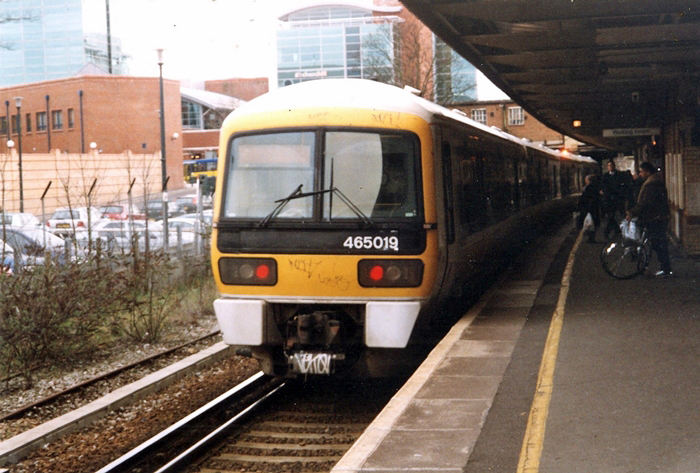 No. 465019, wearing ''Connex'' blue and livery (minus logo) is seen departing Bromley South with a Blackfriars service. © David Glasspool 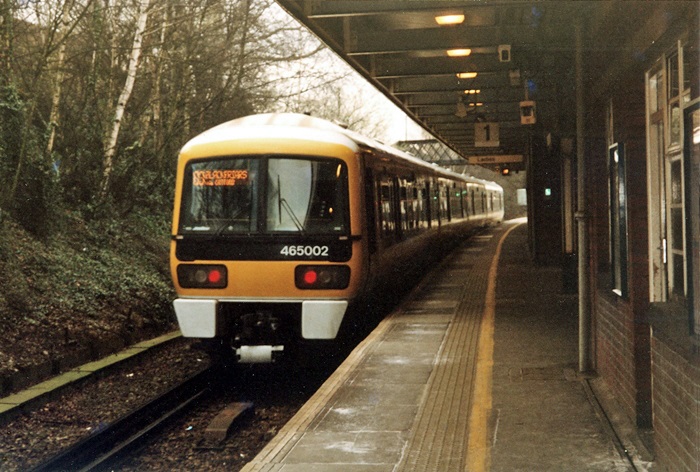 A splendidly clean No. 465002, also displaying ''Connex'' blue and yellow colours, is seen departing Swanley with a Sevenoaks to Blackfriars service, via the Catford Loop. © David Glasspool 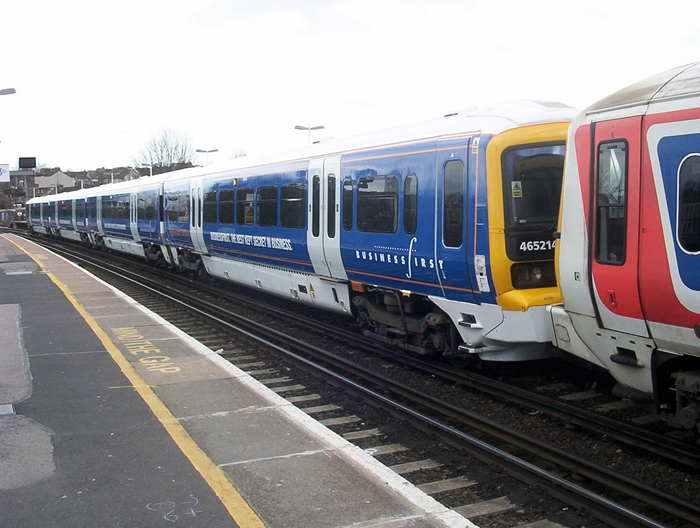 No. 465214 was unique at the time of this photograph, for it was the only unit of the class to wear full advertising livery. In this instance, the vinyl covering promoted ''Continental Airlines'', and identical schemes were applied to Gatwick Express and Heathrow Express units. The unit was seen at Dartford, after trundling in on the rear of a Gravesend to Charing Cross. © David Glasspool