This is an interesting site, for not only is it the point at which "High Speed 1" (HS1 or, to use earlier parlance, the Channel Tunnel Rail Link) dives underground to begin its final leg to St Pancras, the area is also awash with sidings associated with the Ford Motor Company. With the addition of the London, Tilbury & Southend (LT&S) line, which runs parallel with HS1 at this stage, Dagenham continues to offer much railway interest.

In July 1924 the Ford Motor Company announced plans to build a factory at Dagenham, which would replace an earlier facility in Manchester. 244 acres of what mostly comprised marshland was purchased by the company, this of which was expanded to 500 acres during 1929/1930. Of this total, it was proposed that 270 acres would be leased out to other industrial undertakings. The first car rolled off the production line here on 1st October 1931 and the potential output of the works was stated by Ford at the time to be between 1000 and 1500 vehicles per day. The company’s factories flanked either side of the LT&S line, these of which were linked together by a colossal network of sidings. Although now much reduced, today there still remains a maze of tracks around Ford's Dagenham complex.

So as not to digress too much, we now turn our attention to a much more recent construction project in the area, that of HS1. That part of the line which runs through Dagenham forms a piece of what was known as "Section 2" of the CTRL, which encompassed 24-miles of route running from St Pancras to Southfleet, Kent. This part of the route includes a series of engineering feats: St Pancras, Stratford and Ebbsfleet International stations, the Thames Tunnels, Thurrock Viaduct, and finally, the London Tunnels, the latter of which take the route underneath the dense East End suburbs to reach the Euston Road.

The London Tunnels aspect of the line was split into four separate construction phases:

This covered "London Tunnels West", which encompassed twin single bores, each of 4.66-mile (7.5-KM) length and 23.45-feet (7.15-metre) width, running from the St Pancras approaches to an open concrete box at Stratford.

This specified the 0.7-mile-long (1.1-KM) concrete box at Stratford which, between Dagenham and St Pancras, was the only place where the running lines would be exposed. Within this box was to be constructed Stratford International station, in addition to a single-track link upon a viaduct to a new maintenance depot at Temple Mills.

The works here came under the "London Tunnels East" umbrella, which included twin single bores between Stratford Box and Barrington Road, Newham. This tunnel section was 2.92-miles-long (4.7-KM) and the bore diameters as per Contract 220.

These works went hand-in-hand with those of Contract 240, involving the construction of the remaining length of the twin bore East Tunnels running from Barrington Road, Newham, to Ripple Lane, Dagenham. The distance to be covered was 3.6-miles (5.8-km), of which 656-yards (600-metres) would be within twin bores, the remainder under cut-and-cover sections.

Contract 250, of which this article concerns, was worth £115,000,000 and a consortium of Edmund Nuttall Ltd, Kier Construction, and Wayss & Freytag Ingenieurbau AG, was announced as the preferred bidder in January 1998. The adjacent work, Contract 240, was awarded to a consortium of Bachy Soletanche Group Limited, Costain, and Skanska AB, to the tune of £5,500,000. Skanska Construction UK Limited was solely responsible for delivering the concrete box at Stratford, whilst this same firm partnered with Japan-based Nishimatsu Construction Co. Limited on Contract 220.

Work on the above-mentioned contracts commenced in September 2002. In February of the following year, Contract 240 hit a slight snag when tunnelling activity caused two holes to open up in the ground in Stratford within a week of each other. One of these consumed two gardens, whilst part of a road fell into the other. The cause was thought to stem from uncharted wells being disturbed by the tunnel boring machine, and the fix devised was to plough concrete into the gaps. Tunnel boring on Contract 240 was completed in December 2003, and that for Contract Nos. 250 and 220 finished in February and March of the following year respectively. In June 2004, Dutch firm "Cobeton" laid the concrete track bed and walkways through the tunnel bores of Contract Nos. 240 and 250, with work on No. 220 taking place the following July. Track laying along Section 2 of the CTRL commenced later that year.

Track laying and catenary installation for the entire CTRL was covered by a separate contract, No. 570, awarded to ''AMEC Spie Rail Systems Ltd'' for about £120,000,000. At Dagenham, part of this involved linking the new high speed route with the existing sidings of the Ford Motor Company. Shortly after HS1 emerges from Dagenham Tunnel, the "down" line sprouts a single-track trailing connection. This runs along the northern side of the tunnel portal approach and not only provides access for a series of lengthy sidings, but also affords a connection between the LT&S line and HS1. The ''up'' track of HS1 also links to Ford’s sidings and the LT&S route, a spur leaving the high speed line about 1480-yards (1353-metres) east of Dagenham Tunnel. Like the freight loops at Singlewell and Charing Heath, the connection between HS1 and sidings at Dagenham reaffirmed that the new high speed route was as much for freight trains as it was passenger services. That being said, at time of typing, Chunnel freight traffic is still confined to the domestic lines. 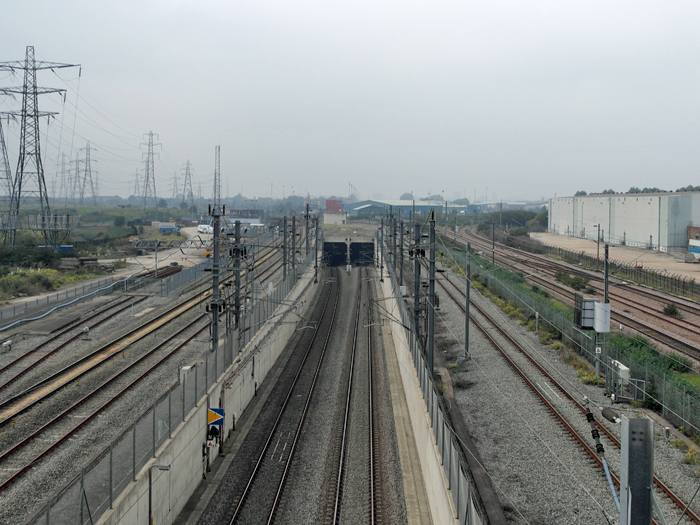 A London-bound view shows the double-track of HS1 descending in the centre, towards the portals of the initial cut-and-cover section from Dagenham. The single track to the right of the concrete cutting is the connection between the LT&S line/sidings and HS1's "down" track, whilst further still is the LT&S route. The tracks on the left emanate from Ford's maze of sidings and also includes the connection from the "up" track of HS1. All tracks in view, bar those of the LT&S line, were laid during CTRL construction works. © David Glasspool 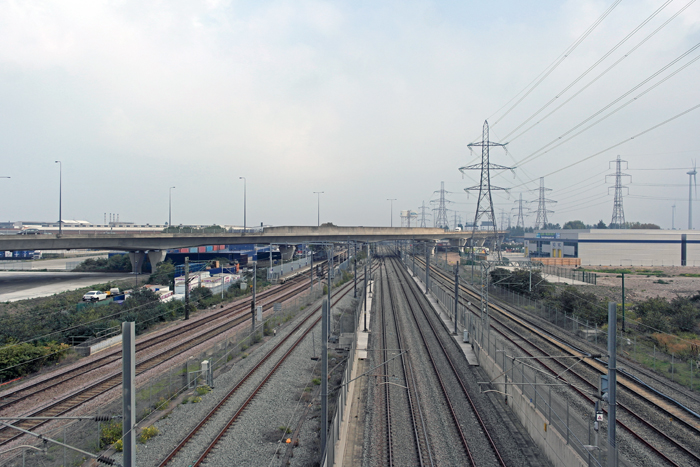 An eastward view shows the ends of Dagenham Dock station's platforms on the left and the "down" connection with HS1 joining immediately after the tunnel approaches. Of the double-track on the right, the nearest is the spur from HS1's "up" line, whilst the second is that from Ford's sidings. The two merge about 470-yards (430-metres) behind the camera. The bridge in view carries the A13 London to Southend trunk road. In 1987, Ford's sidings at Dagenham Dock were electrified to allow continuous electric operation on motor car trains between there and the company's plant at Halewood, Merseyside. © David Glasspool