As planned, the North Kent Line came into use throughout from the Grand Surrey Canal to Strood on the Monday, and termini stations of London Bridge and Bricklayers’ Arms were both served. At Dartford, earthworks were extensive, and involved excavating deep cuttings either side of the town centre to penetrate the sides of the natural valley. To the west, after exiting the cutting, the first ¼-mile of the approaches to the station were perched upon an embankment. The remaining 90-yards of line thereafter ran upon a timber viaduct. The station, too, was elevated, a characteristic which in later years posed difficulties in extending what became a cramped layout. The ‘’up’’ side was host to the main station structures, which included an attractive Italianate two-storey-high main building. This was of yellow-brick construction, and was lined at the edges with stone in a pattern similar to the main building that still survives at Greenwich. Architect of the SER’s London Bridge and the North Kent Line stations was Samuel Beazley, and an Italianate style was used predominantly throughout his work. The main building was accompanied to its immediate west by a trademark of the SER: single-storey clapboard offices. Extending from the main building was a 65-foot-long flat-roof platform canopy, demonstrating an attractive spike-patterned timber valance. The ‘’up’’ platform extended for about 330-feet and at its rear butted up to an embankment formed for the railway. The ‘’down’’ platform was a little longer, extending for about 305-feet, and at its eastern end was linked to the parallel-running Mill Pond Road by means of a staircase. The platforms were partially staggered. In these very early years of the line, it is likely that the entire ‘’down’’ side of the station layout was suspended upon a wooden framework, as a continuation of the viaduct to the west. Waiting accommodation on the ‘’down’’ side appears to have comprised a small timber waiting shelter, and there was no footbridge between platforms.

To the east of the station, the double-track line crossed the River Darent, passed along an 80-yard-long embankment and over a road and, finally, dived into a deep cutting through the valley side. Indeed, it was on this side of the station that goods and locomotive facilities, and berthing sidings, emerged. A goods yard, comprising four eastward-facing sidings, was in evidence on the ‘’up’’ side, immediately south of the main station building. One of these siding passed through a 100-foot-long pitched-roof brick-built goods shed. Situated within the fork of the diverging goods yard and platform lines was a locomotive turntable and wagon turntable, the latter of which served three short stub sidings. Finally, in the cutting east of the station existed a pair of rolling stock sidings, situated on ‘’up’’ and ‘’down’’ sides of the running lines. The ‘’down’’ siding was about 320-yards-long and made a trailing connection with the adjacent line. That on the ‘’up’’ side was shorter at about 265-yards in length and, like its ‘’down’’ side counterpart, made a trailing connection with the adjacent running line.

On 7th March 1863, Princess Alexandra of Denmark made a state visit to Britain, and landed at the Port of Gravesend. Stations at Gravesend, Northfleet, Greenhithe, Dartford, Erith, Belvedere, Abbey Wood, Plumstead, Woolwich Arsenal, Woolwich Dockyard, Charlton, Blackheath, Lewisham, New Cross, and the terminus at Bricklayers’ Arms, were all decorated with flags, bunting, and flowers. The Princess was due to travel by train on the North Kent Line from Gravesend to London. A public meeting had been called at the Black Boy Hotel, Dartford, to discuss how the town’s station could be decorated for the event. A ‘’Triumphal Arch’’ was erected between the two platforms, across the running lines, this of which was decorated with a multitude of flowers and evergreens. The arch was also covered in various flags and upon it was written ‘’THE EXPECTANCY AND ROSE OF THIS FAIR STATE’’. The ‘’down’’ platform was host to flags and bunting hanging from the Barley Twist lampposts, the latter of which were further decorated with flowers, evergreens, and rosettes. The waiting shelter was similarly decorated. The temporary transformation of the station was undertaken by the then Station Master, Mr Harvey, who was assisted by Mr Dives of Lowfield Street.

On 30th June 1862, an Act was passed which allowed the SER to make new routes to Tunbridge and Dartford, these of which latterly became Tonbridge Cut-Off and Dartford Loop Lines respectively. The Dartford Loop Line took a course through Eltham (Mottingham), Bexley and Crayford, and was essentially the second route originally sanctioned as part of the 1847 Act, albeit delivered very late. At the London end of the line, a connection was to be made with the Tunbridge route at Hither Green. At the Kent end of the route, the line would converge with the existing North Kent Line via Woolwich little under ½-mile west of Dartford station. The second route came into regular passenger use on 1st September 1866, coinciding with the opening of the terminus at Cannon Street.

A third, and indeed, final route to Dartford has yet to be mentioned, and the advent of this line ties in with significant enlargement works at the station. This is the line from Blackheath to Dartford via Bexleyheath, originally sanctioned by Parliament on 20th August 1883 as a concern wholly independent of the SER. The latter viewed this line as a potential white elephant, unable to foresee any worthwhile traffic using the route, other than diverted services. After years of talks, the SER was eventually swayed to partly finance the line. After heavy earthworks were overcome, the double-track route opened to regular passenger traffic on 1st May 1895. Three lines now converged on Dartford:

Numbers 1 and 2 met at Dartford Junction, whilst the last joined the North Kent Line at Crayford Creek Junction, Slades Green. In conjunction with the Bexleyheath works, improvements were made to the station at Dartford to increase capacity. A third running line between Dartford Junction and the eastern ends of the platforms was brought into use, which required the widening of the cutting and embankment west of the station. The viaduct was also widened to take a third track, and at the same time rebuilt in brick. The ‘’down’’ platform was rebuilt into a decidedly slim island, 185-yards long, and equipped with a 160-foot-long flat-roofed canopy. This demonstrated a spiked timber valance, identical to that which already existed on the ‘’up’’ side. Strangely, the ‘’up’’ side canopy was removed from the brick-built main building and shifted westwards, so it was now attached to the single-storey clapboard structures upon the platform. This appears to have been done to put the canopy in a more central position; at the time, the ‘’up’’ platform was lengthened at its western end considerably, so it now ended immediately before the rails passed over the below road, Hythe Street.

Track plan of Dartford station for 1910, including eastern and western approaches. © David Glasspool 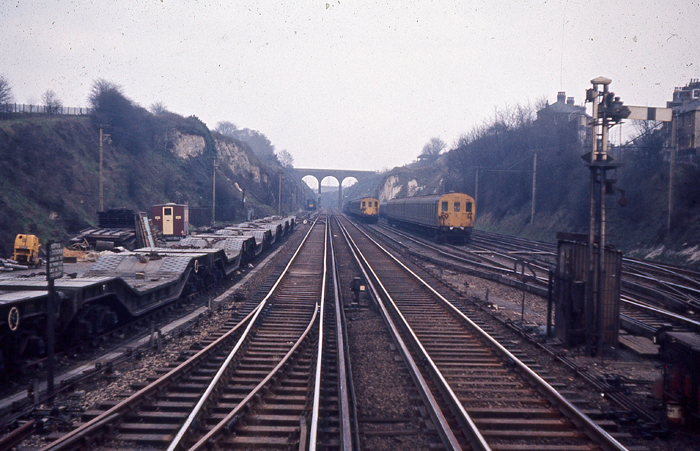 Looking east, with the station's platforms behind the camera, this view shows the electrified rolling stock sidings which flank the running lines, Bulleid-designed EPB units being in evidence. On the left are what appear to be army war flat wagons, which are parked in a siding which was used by the engineering department. The semaphore signal had just over a year left in service. © David Glasspool Collection 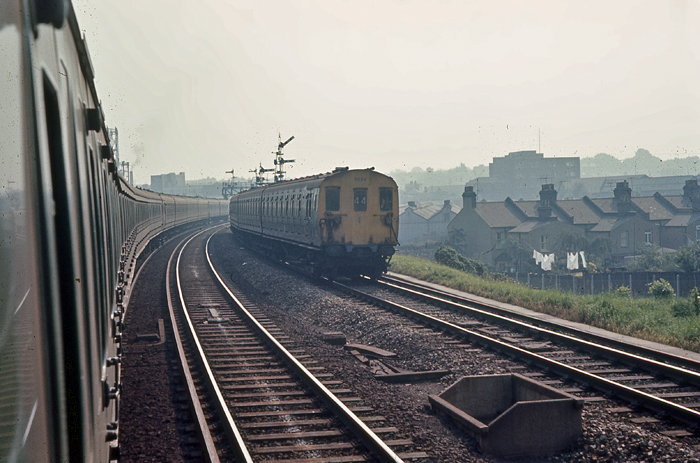 Bulleid-designed 4 EPB No. 5024 is seen shortly after departure from Dartford station, forming a Gravesend to Charing Cross via Sidcup service. The location is between the station and Dartford Junction, the semaphore signals of the latter being visible above the roof of the 4 EPB. In the background can be seen a semaphore signal gantry which controlled access to the platforms for trains coming from the London direction. This gantry sat about 250-yards west of the platforms, westward departure from the latter being controlled by the signal gantry seen on the previous page. In the right background are the substantial buildings of J & E Hall, one of the town's largest employers at the time, specialising in the manufacturer of refrigeration and air conditioning equipment. © David Glasspool Collection 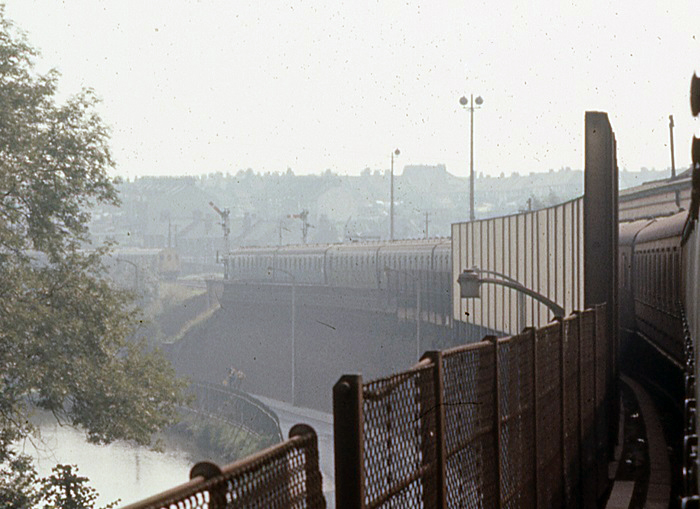 This view, taken from a train departing platform 4 in the Gravesend direction, shows two "down" starting semaphore signals at the eastern end of the station. The screen to the immediate left of the train was for long a feature of the old station; a lower mesh framework remains in place today. © David Glasspool Collection 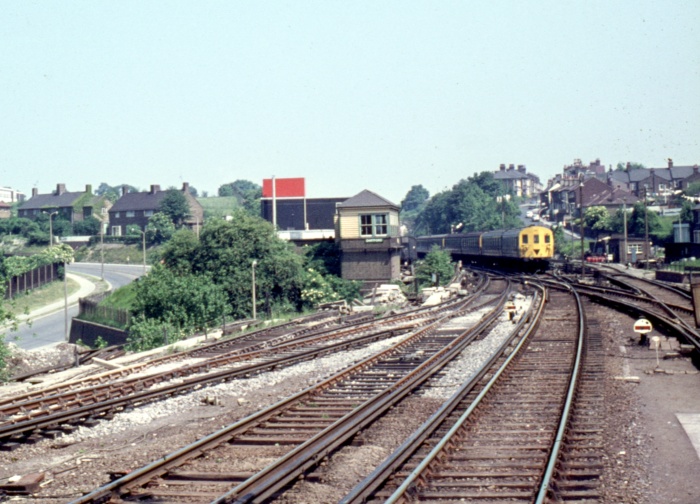 An eastward view shows the then outgoing SER-designed signal box, until 1954 designated “No. 2”, and its rectangular-shaped “Dartford Panel” successor behind. A then soon-to-be-retired semaphore can just be seen above the approaching electric multiple unit formation, led by a 2-HAP, and ascending in the distance is Fulwich Road, from which the 1959 picture was taken. © David Glasspool Collection 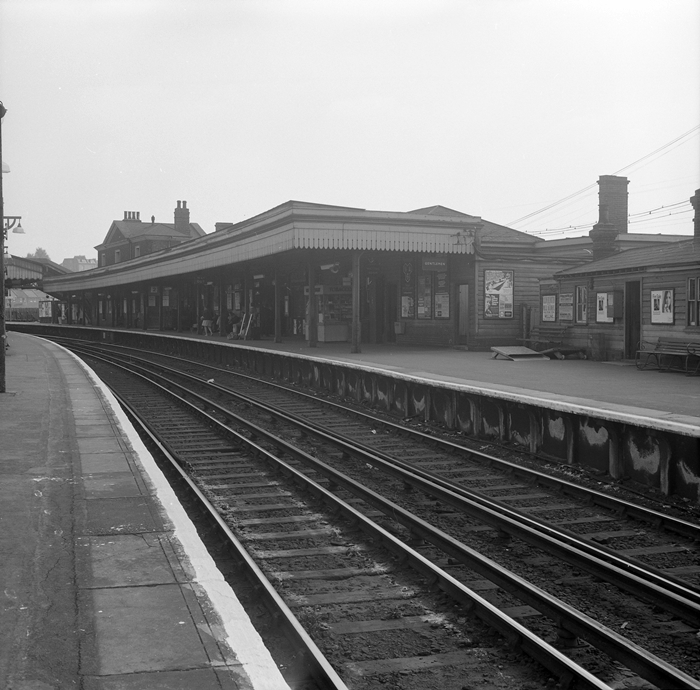 The end is nigh. A poster for the film version of Alistair MacLean's book ''Puppet on a Chain'' dates this eastward view to 1971, the year before demolition. In the background can just be seen the roofed SE&CR footbridge and, on the extreme left, the island platform canopy. At this time, the platforms were numbered 1 to 4. Platform 1 was the eastward-facing ''up'' side bay, which can seen in the distance, on the left, filled with wagons. Platform 2 was home to the main buildings, whilst platform Nos. 3 and 4 formed the island. © David Glasspool Collection 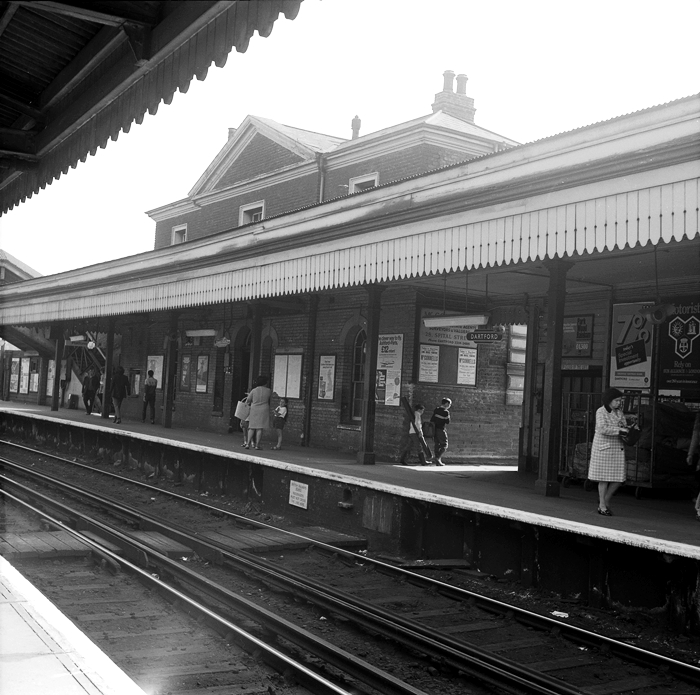 At the time of writing (December 2011), a rebuild of Dartford station was underway. Therefore, it seems fitting to include a close-up of the original ''up'' side structures, the equivalent of today's platform Nos. 1 and 2. This view depicts the original SER Station Master's house, fabricated from yellow brick and lined with stone. Note the footbridge on the far left, the splendid canopy with ''spiked'' valance and, to the right of the structure and entrance/exit, the platform lift. A track foot crossing, for staff use only, is in evidence across the lines. To the top left can be seen the edge of the island platform's canopy, the only part of the original station still in existence today. All other structures were razed to the ground in 1972. © David Glasspool Collection 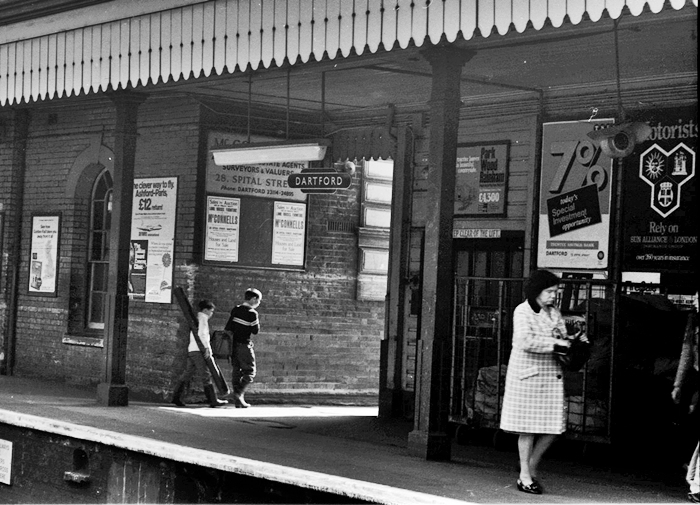 This is a zoomed-in view of the then platform 1, showing the entrance/exit in-between the Station Master's house and the platform lift. The young lads seen leaving the station appear to be on a fishing trip - to the River Darent or Dartford Lakes, perhaps? The indentation on the platform face, bottom left, housed a step down to the staff track foot crossing. There are adverts for Sun Alliance and local estate agent McConnell's (which still exists today), in addition to one promoting a £12 return flight from Ashford to Paris. © David Glasspool Collection