This remains an important interchange point between three intensively used suburban routes from London. However, had alternative proposals prevailed, the town of Dartford would today have a station on a main line to Thanet. In 1836, three railway schemes were brought in front of Parliament to link the Kent Coast with the capital, namely:

The ‘’Central Kent Railway’’ (CKR) was to become a natural extension of the London & Greenwich Railway (L&GR), and make an end-on connection with the latter at Deptford. This was at a time when the L&GR went no further east than Deptford; indeed, Greenwich was not finally reached by scheduled services until 24th December 1838. The line was to be 83-miles 75-chains in length, have a ruling gradient of 19.62-feet, and earthworks would be heavy. The proposed route from Deptford took a course through Lewisham, Lee, Eltham, Bexley, Foots Cray, North Cray, Wrotham, Maidstone, Lenham, Ashford, Canterbury, Sandwich, and, finally, ended at Deal. Between Canterbury and Sandwich, the line would pass through the villages Stodmarsh, Preston, and Ash. In addition, the line would terminate on Deal’s northern outskirts at Sandown Castle. The CKR is looked at in greater depth within the Tonbridge section.

The ‘’North Kent Railway’’ was planned to run from London to Canterbury via Deptford, Greenwich, Woolwich, Dartford, Gravesend, Stroud (Strood), Rochester, Chatham, Brompton (Gillingham), Milton, Sittingbourne, Faversham, Canterbury, and Margate. A branch for Maidstone was also to be sprouted at Rochester, and presumably an end-on connection with the L&GR would be made at Deptford. The main line was to be 83¼-miles in length, have a ruling gradient of 16-feet, and require 1½-miles of tunnelling. In terms of potential traffic, the North Kent proposals were preferable to those of both the Central Kent and South Eastern Railways, given the population centres the line would pass through or near. The SER scheme is well known: a line from Reigate to Dover via Tonbridge, Ashford, and Folkestone, traversing the natural level of the Weald of Kent for much of its 77-mile extent. Indeed, it was the SER that received Royal Assent for the main line to Dover, on 21st June 1836; the CKR and NKR were killed stone dead.

In its formative years, the SER had considered a main line to Dover which passed through Kent’s northern territories, as per the aforementioned unsuccessful projects of the CKR and NKR. However, opposition, rather than support, was received from local populations. This, coupled with Parliament’s desire to have just one rail outlet south of London, led to the adoption of the Weald of Kent route. Expansion of the SER was swift after Dover was reached by scheduled services on 7th February 1844, and the company again turned its attention to the county’s northern portions. The SER put forward its own North Kent Line to Parliament in 1847, which was essentially a revived NKR of 1836, but with modifications. This was also at a time when the company sought a West End terminus for both the Weald of Kent and proposed North Kent Lines. Of the latter, this was to be 53-miles, 1 furlong and 213-yards long, and run from the L&GR at the Grand Surrey Canal, to Chilham, where a connection with the SER’s Canterbury line would be made. This line was to take a course through a part of Deptford-New-Town, Lewisham, Eltham, Bexley, Crayford, Dartford, and onto Gravesend. Beyond, the already extant route of the Gravesend & Rochester Railway (a locally owned line opened throughout between Denton and Strood on 10th February 1845) would be upgraded and used by the SER. From Strood, the line was to cross the Medway on a single bridge designed to carry both road and rail traffic, and thereafter would proceed onto Rochester, Chatham, Gillingham, Milton, Sittingbourne, Faversham, and finally, Chilham. At Lower Halstow, near Sittingbourne, the line would sprout a 5-mile 7-furlong and 138-yard-long branch to Sheerness. In addition, a 1-mile 1-furlong and 39-yard-long branch to Faversham Creek was to be made from the main line.

The term ‘’North Kent Line’’ in fact incorporated two routes. The second was to leave the L&GR at Deptford Creek, pass underneath Greenwich Park, and then onto Charlton, Woolwich, Plumstead, Erith, and Dartford, where it would converge with line via Bexley and form a single route eastwards thereafter. From Deptford Creek to Chilham, the distance was 52-miles 3-furlongs and 105-yards. Tunnelling under Greenwich Park was attached with issues relating to the Royal Observatory, which was concerned that the vibration from trains running below would disrupt their instruments. As a contingency plan, should the Royal Observatory’s objections not be overcome, the SER proposed a Greenwich avoiding line. Termed the ‘’Blackheath Loop’’ from the outset, this linked the Bexley and Woolwich lines between Blackheath and Charlton. It was not intended to bring both the Greenwich Park and Blackheath Loop lines into service, but should the latter be required, the original Greenwich route would simply become a dead-end appendix of the SER system.

Finally, mention should be made of the proposed West End terminus. A new line was to meet the North Kent Line at the Grand Surrey Canal, and head westwards to a terminus on the South Bank of the Thames, at Waterloo and York Roads. This extension was to be 3-miles 7-furlongs and 174-yards long, and reuse 1¾-miles of the existing Bricklayers’ Arms branch. At the terminus end of the line, a connection was to be made with the South Western main line. Expansion proposed by the Great Western and London & Birmingham Railways would in turn connect the SER, via the South Western, to the railways north of the Thames. The SER agreed to lay down the electric telegraph system on all of its lines as part of the North Kent Bill, which successfully passed through Parliament in July 1847.

After the Bill had received Royal Assent, the SER’s North Kent aspirations appeared to shrink considerably. Initially, only the Greenwich to Gravesend portion, a distance of 25-miles and 4-chains, and the existing Gravesend & Rochester Railway were to form the new line. Indeed, the company was eventually unable to overcome the Royal Observatory’s opposition and was forced to pursue the Blackheath Loop. Thus, the original pair of North Kent Lines were amalgamated into one: the western end of the first route, via Lewisham, was coupled with the eastern end of that via Woolwich and Plumstead. For the time being, Eltham, Bexley, and Crayford were deprived of a railway, and the Greenwich line was a seemingly useless dead-end branch. Authorised capital for the line was £1,000,000 (£67,300,000 at 2008 prices), with the option of taking out an additional £333,000 (£22,400,000 at 2008 prices) in loans.

On 29th June 1849, J. L. A. Simmons, a Captain of the Royal Engineers, inspected the construction progress of the North Kent Line on behalf of the Board of Trade. It was reported that the rails between Gravesend and Erith had been laid and were nearly ready for traffic, but those beyond the latter, to Woolwich, were not yet in place. A tunnel at Charlton was also noted for being incomplete, and an embankment for the junction linking North Kent and Bricklayers’ Arms lines was still to be finished. It was thought that re-inspection a month later would see these works completed, after which a recommendation for opening could be made. A second inspection indeed took place on 13th July of the same year, this time by R. M. Laffan, again a Captain of the Royal Engineers. It was reported that the works between Erith and Gravesend were fully complete and this section of line was ready for traffic. A third Board of Trade Inspection, made by Captain George Wynne, Royal Engineers, on 20th July 1849, revealed that much of the ‘’up’’ line between Woolwich and Erith had yet to be laid. In addition, the portion of the line through Woolwich was covered in rubbish and building materials, making it impassable. As a result, this section of line was not recommended for opening. A final inspection was made by Captain Laffan on 26th July 1849. It was reported that all major works were essentially finished, but heavy rain had caused embankments to settle and cuttings to flood, proper drainage not yet being fully complete. Nevertheless, the line was recommenced to open on Monday 30th July 1849, but it was suggested that trains should be restricted to a moderate speed until the time that the embankments were completely consolidated.

Click the above for a larger version. Drawn by David Glasspool 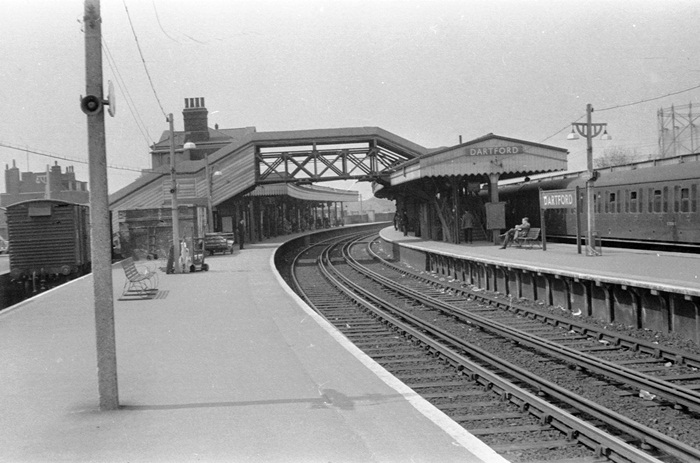 A classic westward view from the ''up'' platform in 1960 shows the final station layout prior to rebuilding in 1972. On the right is the ''down'' island platform, complete with SE&CR canopy, SR concrete bracket lampposts, and an eastern end rebuilt in prefabricated concrete. Stabled at platform 4, on the far right, is a BR-designed EPB unit. Behind the footbridge, which is partially clad with timber, is the SER main building, an Italianate design produced by Samuel Beazley. The ''up'' side canopy predates that on the ''down'' side island, and at the time comprised an attractive spiked timber valance. The ventilated van on the left stands in a bay line which served a dock and cattle pens. A water tower is out of view, beyond the left-hand side of the photograph. © David Glasspool Collection 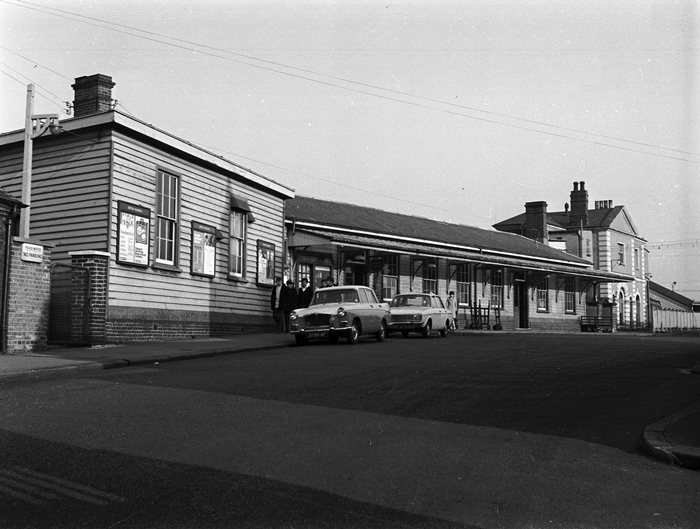 This splendid view of the original SER Dartford station includes the large clapboard ticket office. To the right is the Station Master's house, which by this time was handling parcels traffic. Whilst this structure comprised exposed yellow brickwork on the platform side, its walls were rendered on the road-side and frescoed with stone lining. Behind the group of lads walking down the pathway is a WH Smith & Son bookshop. Parked up can be seen a Hillman Hunter and, in front of this, an MG Magnette (with thanks to Jim Greaves for identifying the latter). © David Glasspool Collection 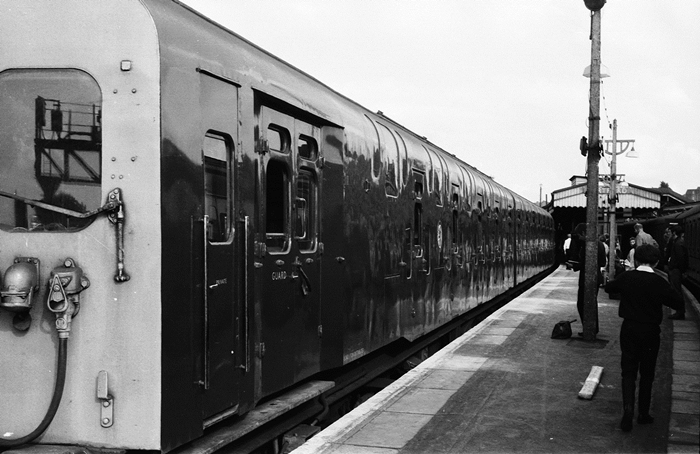 An eastward view from the London end of the ''down'' island shows a Bulleid 4DD ''Double-Decker'' unit stabled at platform 3. The type had just two years left until withdrawal from the Dartford routes, having so far managed a service career of two decades. A simplified version of the canopy seen in the above photograph is still in evidence today, but everything else bar the platform brickwork has gone. © David Glasspool Collection 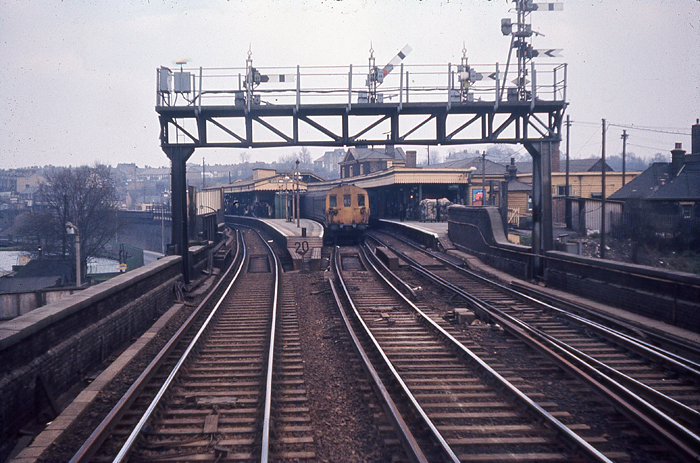 This photograph was taken from the cab of a train approaching a packed platform 3 from the London direction. Departing platform 2 is a Bulleid-designed 4-EPB with a Dartford to Charing Cross service via Greenwich. The scene is full of bygone detail which would mostly be swept away in a few short years. The semaphore signal gantry remained active until November 1970, being replaced by colour aspect lights on 1st of that month. On platform 1 (right) are two BRUTE (British Rail Universal Trolley Equipment) cages full to the brim with parcels sacks. Protruding through the roof of the canopy on platform Nos. 2 and 3 is the lift shaft, whilst behind can be seen the covered passenger footbridge. Samuel Beazley's two-storey station building is prominent above the huge canopy on platform 1, whilst on the far right, above the clapboard structures, can just be seen the pitched roof of the goods shed. A short section of the latter survived right up until 2013 as a crew room. © David Glasspool Collection