By March 1989, British Rail and British conglomerate ''Trafalgar House'' had devised a Channel Tunnel Rail Link (CTRL) which could be delivered to the Government for £1000 million, by means of a public-private partnership scheme. ''Union Railways'' was a BR subsidiary which had been established specifically to undertake the planning and building of the link line. Compared with the scheme which eventually transpired, this CTRL proposal was cheap, but it was also one which lacked sensible planning. Between the Medway and the tunnel portal, the line unveiled roughly followed the course of the route finally settled upon, but it was the CTRL's northern section in particular which was open to severe criticism. A terminal area at Kings Cross was selected as the capital's main international hub, and this was to be reached by means of a high-speed route cutting through the South East London suburbs. As a result of these plans, numerous unfortunate residents were to lose their existing homes: from the Borough of Dartford and onwards, into the London suburbia, a programme of mass demolition was to be implemented, and streets were to disappear. Under a compulsory purchase scheme, British Rail began buying residential properties, the only compensating fact for the owners being that good prices were paid by the nationalised organisation. Local resistance groups such as ''Sink the Link'' began to emerge, but as far as British Rail was concerned, the project was going ahead.


In 1990, the stage was set, and amidst protests from more than 50 resistance groups, the Government confirmed British Rail's CTRL, which entered London from the south, as the chosen route. Allegedly, this line had been traced out on a kitchen table by planners, using a map dating from the 1950s – thus, more recent housing estates did not present themselves as obstacles. Before whole neighbourhoods were razed to the ground, the Government received some timely outside advice from ''Ove Arup & Partners'', a structural engineering firm which operated on a worldwide scale. The company submitted its own ideas for consideration, which outlined an extensively revised route entering the capital from the east. An easterly approach to London allowed much undeveloped land in Essex and the East London suburbs to be utilised, and this route would also prove to be the least destructive. Aesthetics were also on this line's side, for 25% of the revised CTRL would be within a tunnel. Thus, new plans were published in October 1991 in favour of this alternative, which won considerable support in light of the regeneration it could bring to East London. By this time, British Rail had already bought numerous properties under the original 1989 scheme – these were subsequently sold on.

The Arup & Partners route was initially estimated at £3000 million, and the Government proposed that this would be funded by the private sector. Although the CTRL route had now been confirmed, the locations of the stations had not, and the possibility of platforms at Ebbsfleet did not come to light until 22nd March 1993, during a House of Commons debate. The location had, however, been outlined, and it now seems appropriate to describe the surroundings. ‘’Ebbsfleet’’ derives from the name of the River Fleet, which passes through the site: it appears to begin at Springhead Nursery, immediately north of the A2, passes under the western end of Northfleet station, and flows into the Thames at the same longitudinal point as the platforms. Indeed, this is where the names Northfleet and Southfleet derive; Ebbsfleet would seem to originate from where the river ‘’ebbs’’ – i.e. ceases to be tidal. The reserved land was bordered to its west by Southfleet Road, to the north by the North Kent Line, to the east by a flooded chalk pit and the A2260, and finally, to the south by the A2 trunk road. The land itself was quite a mixture, too: that bordering immediately with the site of Northfleet station and its freight sidings was Blue Circle Cement’s sports ground. To the west of the sports ground was an old landfill site, whilst to the south was Northfleet Landfill site, under restoration (i.e. soil was being restored to allow future use). Below Northfleet Landfill was Southfleet Quarry, then recently exhausted, whilst to the east and south of this remained agricultural land. 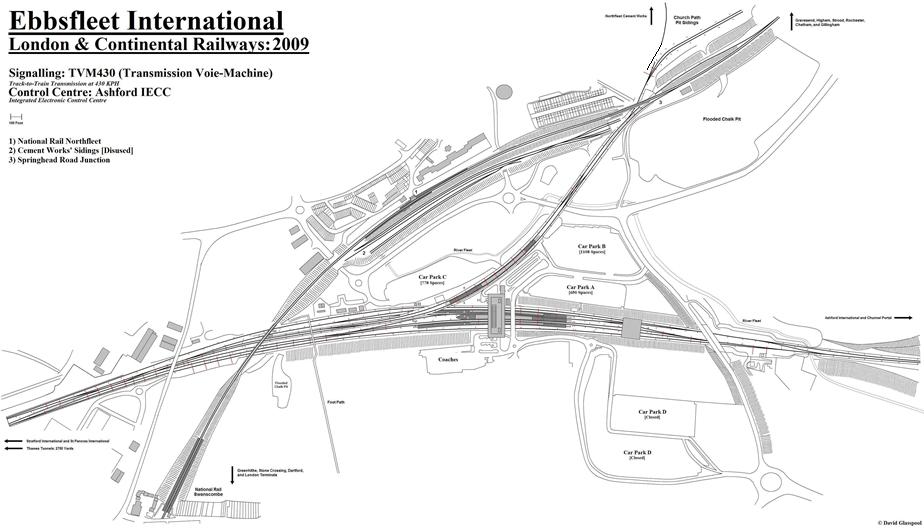 Ebbsfleet International track plan for the year 2009, including part of the North Kent Line. The disused sidings of Northfleet Cement Works also feature, despite the fact that some of the tracks nearest Springhead Road Junction were lifted during the CTRL building works. Drawn by David Glasspool