The London suburb of Eltham has had no less than four separate railway stations to its name, three of which were all within the space of half a mile of each other along the same stretch of line. The first of these to open was ''Eltham'' on the Dartford Loop Line, on 1st September 1866, the station residing ¾-mile to the south of the locality it purported to serve. The site became known as ‘’Eltham & Mottingham’’ from 1st January 1892, and it was only from 1st October 1927 that the station became just plain ''Mottingham''. The second station of note was Well Hall, which came into use with the Bexleyheath line on 1st May 1895. The station had been built in accordance to the SER’s typical ‘’economical’’ policy, and a single-storey clapboard building was the main feature, this residing on the ‘’up’’ platform. The emergence of a third station for the locality was a mere thirteen years away. During the first decade of its existence, the SE&CR made numerous improvements to the erstwhile separate SER and LC&DR networks, the most prominent arguably being the St Johns to Orpington quadrupling and the Chislehurst Junction works. As far as stations along the North Kent routes were concerned, the company seemed to perpetuate a characteristic favoured by the LC&DR, that being the provision of ‘’high-level’’ station buildings. Indeed, both Woolwich Arsenal and Charlton received such features in 1906, and a then newly proposed station at Eltham would receive similar treatment. At a somewhat paltry half a mile to the east of Well Hall, the SE&CR commenced construction of a two platform affair, named since the project’s inception as ‘’Shooters Hill & Eltham Park’’. This was despite the fact that the road named as the prefix was in fact a mile to the north of the site! The emergence of the second station would appear to stem from convenience for passengers: the then new site was positioned directly beside the main high street. It had been suggested that the station would be a replacement for Well Hall, not a complement of it; the latter’s closure would naturally have cost reduction advantages. However, opposition against this compelled the SE&CR to keep both stations running concurrent with each other.

Major Pringle of the Board of Trade inspected the station on 2nd July 1908. Two platform surfaces had been erected either side of the double-track running lines, each measuring some 450 foot in length and 16 foot in width. The three-foot high platforms were also on a considerable gradient, London-bound trains enduring a climb of 1 in 81. Graceful and copious canopies were evident on both platforms; these could quite accurately be described as pitched-roof versions of those structures still in evidence at Paddock Wood, for a triangular cross-section was employed as opposed to a semi-circular arrangement. Lining the rear edges of both canopies for a third of their length was the waiting accommodation. Single-storey and with their own pitched roofs, these structures were fabricated out of the same crème brick (with orange brick lining) which was utilised within the construction of Elmstead Woods and Orpington stations, to name but two (indeed, this brickwork was heavily used by the LC&DR in its later years, Chatham and Faversham surviving as fine examples). General waiting rooms were provided, but also, on both platforms, a separate ladies waiting room was in evidence. The road bridge was positioned some 175 feet to the west of the platforms, and to accommodate the 85-foot long ‘’high-level’’ entrance, it was widened on its eastern side. Speaking of the main building, this was a somewhat interesting affair, the structure demonstrating a complex roof design as a consequence of receiving numerous pitched sections. The legend ‘’SE&CR 1908’’ graced the building’s façade, which had been frescoed with intricate stonework above the main entrance. The enclosed footbridge here was affixed to the rear elevation of the booking hall (in harmony with Woolwich Arsenal and Charlton stations), but the platforms were positioned a further 150 feet to the east. Thus, to bridge the gap, a pair of 250-foot long covered ramp walkways were installed - a stroll between platforms would certainly have been circuitous! In light of this, male and female toilet facilities were established on both platforms.

The aforementioned visit by the Board of Trade on 2nd July 1908 revealed that only the ‘’high-level’’ entrance of the station was not fully complete. Major Pringle had personally recommended the station for opening in writing on the day of his visit (on the condition that the booking hall was completed beforehand), and such was made official on the 4th of the same month, when his report was received by the Board's Railway Department.

As far as the track work was concerned, the layout here was very simple, just the two running lines being in evidence. No goods yard was ever commissioned, such a facility already being available at Well Hall station. Initially, no additional signals were brought into use; only one minor alteration was made at Well Hall station in connection with the works. This merely involved the shifting of the ‘’down’’ advance starting signal from its position south of the running lines, to the north. Later, however, a ‘’distant’’ semaphore appeared at the London end of Shooters Hill & Eltham Park’s ‘’up’’ platform. Modifications at the station were swift under Southern Railway ownership. In 1924, during the SR’s second year of existence, the ‘’high-level’’ booking hall was taken out of use and converted into shops. The legend ‘’SE&CR 1908’’ was replaced with ‘’Station Parade’’, and tickets were subsequently sold from the ‘’up’’ side platform offices. On the plus side, passengers wishing to traverse between platforms no longer had to endure a long route; a covered lattice footbridge was erected over the platforms and running lines, it being carried above the canopies. Nevertheless, the long covered walkways remained in use, linking the high street with the platforms. Soon after these modifications, the layout was to see itself overshadowed by a most imposing structure. This was the SR’s typical red brick three-storey high substation, built just beyond the eastern end of the ''down'' platform, in connection with the electrification of the North Kent routes in 1926. The SR’s final implemented change was that of the station’s name, it simply becoming ‘’Eltham Park’’ from 1st October 1927 onwards.

Under British Railways ownership, Eltham Park had a fairly quiet existence, this being somewhat accentuated by the fact that there was no goods yard to rationalise, nor a signal box to close. Indeed, minor modifications had occurred in June 1954: the ‘’up’’ and ‘’down’’ platforms were extended at their eastern and western ends respectively, to accommodate ten vehicle formations. Concrete bracket lampposts had already been appearing on the platforms half a decade earlier. Thankfully, Eltham Park avoided the dreadful station modernisations of the late 1960s and 1970s, and passed through these decades retaining its intricate SE&CR canopies, crème brick platform offices, and the former ‘’high-level’’ entrance. However, come the sectorisation era, both Well Hall and Eltham Park stations were doomed. During the 1980s, numerous stations on the North Kent routes were rebuilt and modernised, much of the work being done to reduce long-term maintenance and repair costs, and to create a ''modern'' looking commuter railway (especially with the procurement of new rolling stock in sight). Under the auspices of the ‘’London & South East’’ Business Sector (latterly ‘’Network SouthEast’’), a scheme evolved whereby the two existing Eltham stations would close and be replaced by a new two platform affair situated in-between the sites. The provision of a new station, complete with bus interchange, was undertaken in conjunction with widening and realignment of the parallel A2 trunk road. Closure of the Eltham stations had been earmarked for 2nd March 1985, but prolonged building work at the modern station site gave a brief reprieve from decommissioning, this instead occurring on 16th of the same month. The then new ''Eltham'' station came into use the following day. 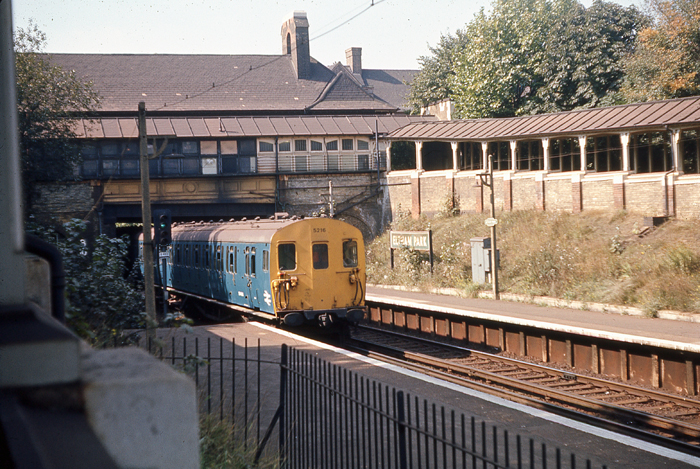 4 EPB No. 5216, wearing all-over BR Blue, is seen departing Eltham Park in the direction of the London terminals. The station still possessed green platform name boards, concrete bracket lampposts with hexagonal lampshades, and the well-known BR "sausage" totems. By this time, the "high-level" station building had been closed for 47 years. © David Glasspool Collection 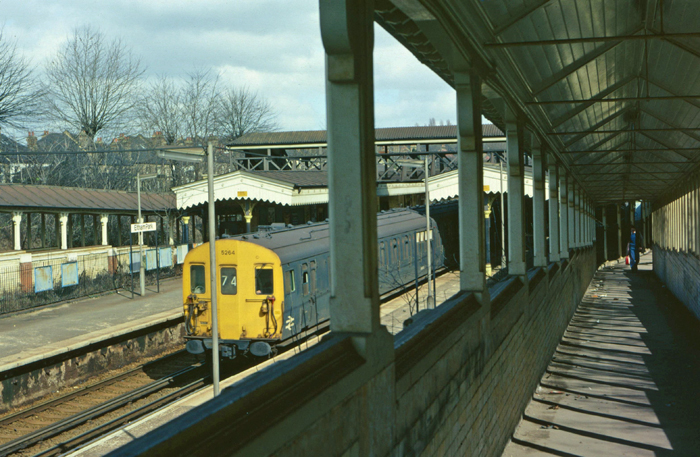 Bulleid-designed 4 EPB No. 5264 is seen forming a Charing Cross service in this view from the "up" side covered walkway. This station was equipped with very generous protection from the elements, which included a pair of 260-foot-long canopies, complete with attractive clover-patterned valances, and a 250-foot-long covered walkway on either side. The latter were commissioned when the Southern Railway closed the main station building in 1924, and the roofed lattice footbridge seen in the above photograph was brought into use at this time. © Tom Burnham 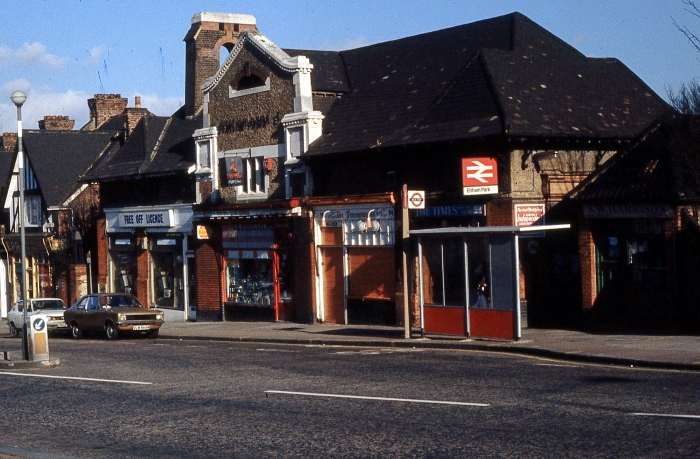 At this time, the original "high-level" main building was shared by an off licence, chemist, and newsagent, but the British Rail "Arrows of Indecision" sign indicated that there was still a set of operational platforms behind. Note the substantial double chimney stack, which is no longer part of the building which survives today. © David Glasspool Collection 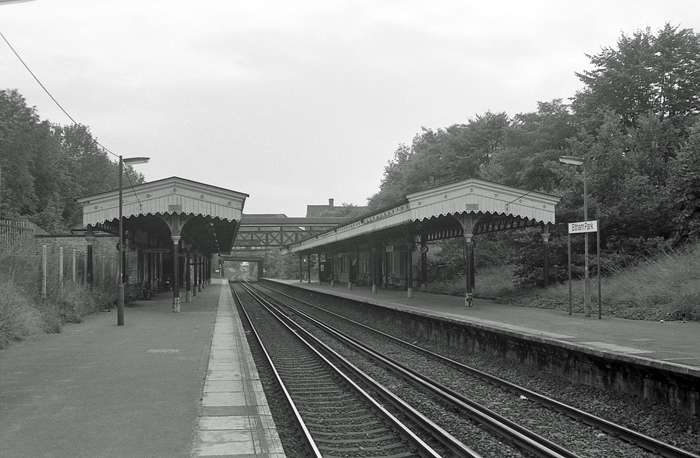 A London-bound view, less than a year before closure, shows the roofed footbridge commissioned by the Southern Railway, when the "high-level" main building was closed and the ticket office moved to the "up" platform. Note the splendid platform canopies which, interestingly, did not have a symmetrical cross-section - that portion sloping back down towards the buildings was of greater width. Through the station, the line descends at a gradient of 1 in 81 towards London - note the angle of the "down" buildings in relation to the surface of the platform. © David Glasspool Collection 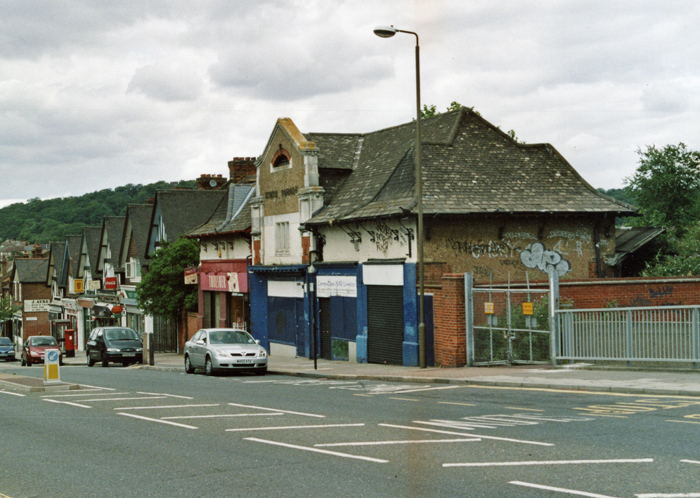 The original ''high-level'' building of 1908 remains in existence and when viewed on this day, still displayed the text ''Station Parade''. The complex hipped roof is prominent in this view, as are signs of neglect. The pitched roof of the original footbridge, which has since been demolished, can be seen at the rear. © David Glasspool 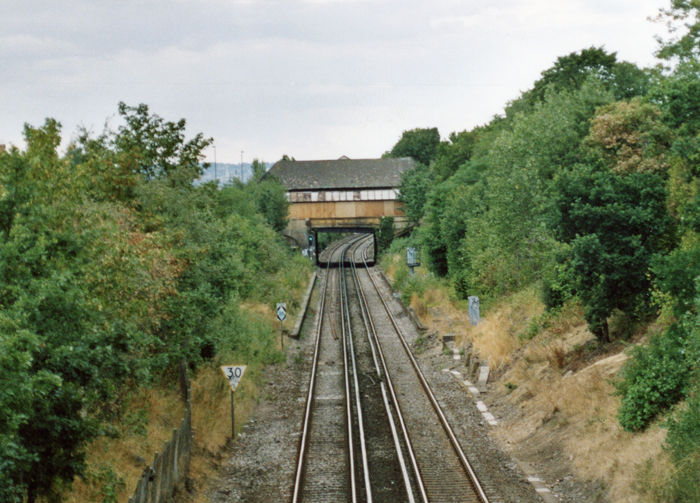 Now behind the station building, this westward view reveals the full length of the 1908 footbridge, by then boarded up, and the edges of the platform surfaces. The SR substation formerly resided on the right, but had succumbed before the station's closure. © David Glasspool