The rural Swanley to Sevenoaks Bat & Ball line is very untypical in character of the LC&DR, its charm instead stemming from the original building company, the ‘’Sevenoaks Railway’’. No station along the route is quite the same, the architecture employed here being, in most cases, more elaborate and imposing than that which the LC&DR usually produced at intermediate stops. The line opened to passenger traffic on 2nd June 1862, worked by the LC&DR from the outset, and was initially single-track. A station at Eynsford came into use the following month, on 1st July, and despite the single-track, it is highly likely that two platforms were in use from the outset, as a result of a passing loop being present. This at least helps to date the main building and the goods facilities. Double-track working came into use shortly afterwards, on 1st August 1863, followed eleven years later by an eastward extension from Otford to Maidstone. Compared to the usual architectural work of the LC&DR, the station building here was something to behold, especially in light of it serving the small and picturesque hamlet of Eynsford, located approximately half a mile to the north east of the line. The main building was positioned on the ‘’down’’ side, was two-storeys high, boasted chimney stacks worthy of a Tudor premises, finished off with arched window frames – the latter was indeed a favourite feature of the LC&DR. On the ‘’up’’ side was a much more modest timber waiting shelter, but even this featured an elaborate valance, in addition to wrap-a-round sides for improved protection from the elements. A track foot crossing was in use until a lattice footbridge (identical in pattern to that still in use at Adisham) arrived in about 1910. The station’s signal cabin was positioned at the southern end of the ‘’up’’ platform and probably opened around the time of the Maidstone line's doubling, in 1882.

Every station on the original Sevenoaks Bat & Ball route acquired a goods yard, complete with a single-track pitched-roof shed of the same basic design (although Bat & Ball’s goods building demonstrated a bout of elaborate brickwork). Eynsford’s yard was positioned on the ‘’down’’ side, to the south of the main building, and comprised a pair of sidings, one of which passed through the goods shed. The latter track also featured the once common wagon turntable, positioned in-front of the goods shed’s entrance. Later revisions of the yard saw the abolition of the turntable and the relaying of the second siding further to the east to allow the incorporation of coal stacks in-between the two tracks.

In 1932 the platforms were lengthened at their southern ends, requiring the abolition of the existing signal box on the ‘’up’’ side, which was fouling the extension. This was the second time the platforms had been extended, the first occasion having occurred in about 1894, when brick was still used. Like at Martin Mill, the Southern Railway utilised an economy measure by installing a new lever frame within the station building itself. For this, a porch was erected on the ground floor of the structure’s platform façade, to afford the signalman a view of the line; it would have been decidedly restricted in comparison to a standard signal box. Concurrent with the platform extensions, an additional siding was laid on the ‘’down’’ side, terminating immediately at the end of the lengthened platform section. This was then followed on 6th January 1935 by the commencement of electric services from Bickley to Sevenoaks Tubs Hill via Bat & Ball. Maidstone East was reached by third rail concurrent with its ex-SER ‘’West’’ counterpart and Gillingham, on 2nd July 1939. In conjunction with the 1935 electrification, Eynsford lost its lattice footbridge to a prefabricated concrete replacement manufactured at the SR’s Exmouth Junction works. The replacement of lattice footbridges in this manner seems to be inconsistent, many stations still retaining this classic design despite the advent of third rail.

Over the years there have been the inevitable station changes. Goods traffic ceased in May 1962, and by the end of the decade the goods shed had been razed to the ground. Nearby Shoreham managed to retain its good shed, ultimately because it was let out for commercial use after decommissioning. By this time, Eynsford's station building was filthy, but a cosmetic restoration during the 1980s rectified this. During the 1970s, the Southern Railway’s concrete lampposts were replaced with the then customary metal round lamppost types, and the waiting shelter lost the side lengths of its canopy valance. Despite further modernisations at the site, such as the installation of drivers’ platform television screens in 1992 and electronic departure indicator boards in 1999, the station still emits a seemingly bygone ethos, augmented by its tranquil setting. From the roadside, this quality was somewhat marred by the installation of unpainted palisade fencing at the foot of the embankment (''up'' side) in 2005. 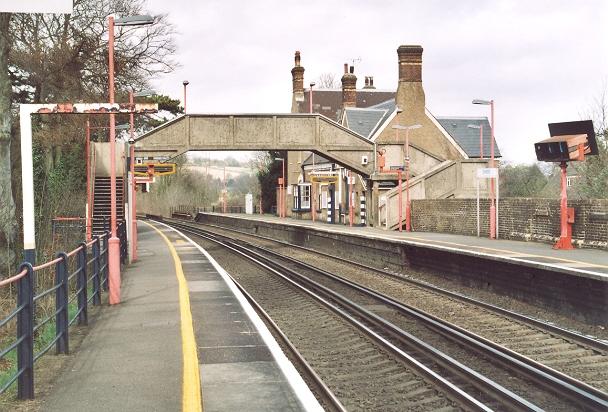 screens and, of course, the station building complete with its tall chimney stacks. The brick wall

on the right is all that remains of the goods shed. The signal cabin porch can also be deciphered

in this view. David Glasspool 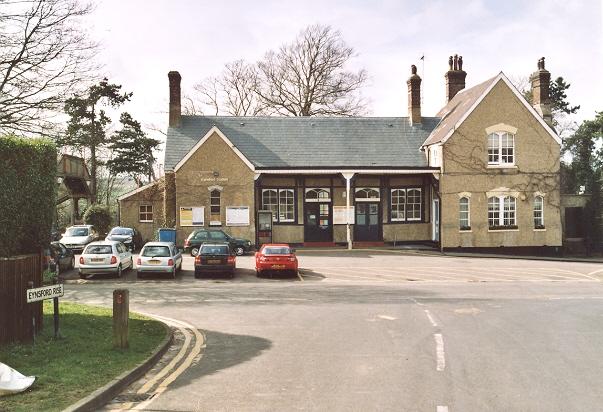 The façade is viewed on 31st March 2006, looking spruce and complete in the most recent company

colours. It is worth noting that unlike its counterparts along the line, this building appears to have

a pebbledash surface, which dates from its earliest days. David Glasspool