This impressive nine-arched red-brick viaduct is a prominent feature on the line to the delightfully-named "Bat & Ball" station. The structure was built by the independent "Sevenoaks Railway", incorporated in 1859 to link the "Chatham" main line with the market town of Sevenoaks. The branch was initially single-track, seeing its first services on 2nd June 1862, but the viaduct was built to accommodate two tracks from the outset, because the line was doubled in the following year. A Maidstone extension from Otford opened on 1st June 1874, this again single-track, but following in the footsteps of the original Bat & Ball line, this was soon doubled, two-track working commencing on 11th August 1875. The viaduct has nine arches of 30-foot span, and rises to a height of 75-feet above the valley. 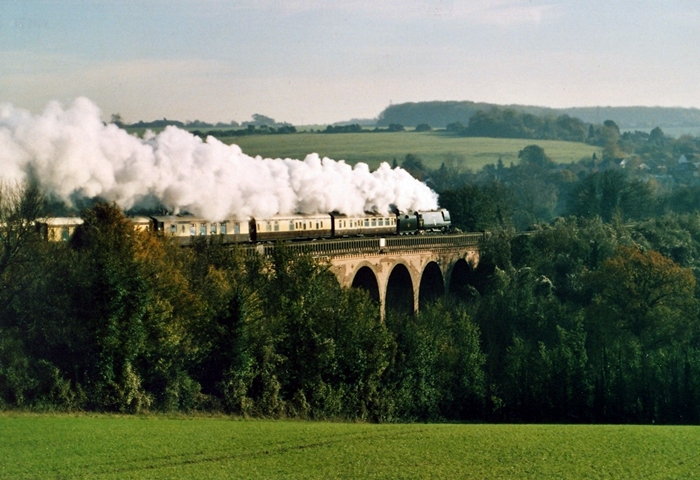 The sight and sound of the 11:45 Orient Express from London Victoria to Folkestone West on 19th November 2005 was certainly impressive. Un-rebuilt Battle of Britain Class No. 34067 "Tangmere" was hauling the train on this day, with a scheduled arrival at Folkestone West of 15:15. Originally, the service was routed via Chatham for the destination Whitstable. Last minute engineering works changed this. © David Glasspool 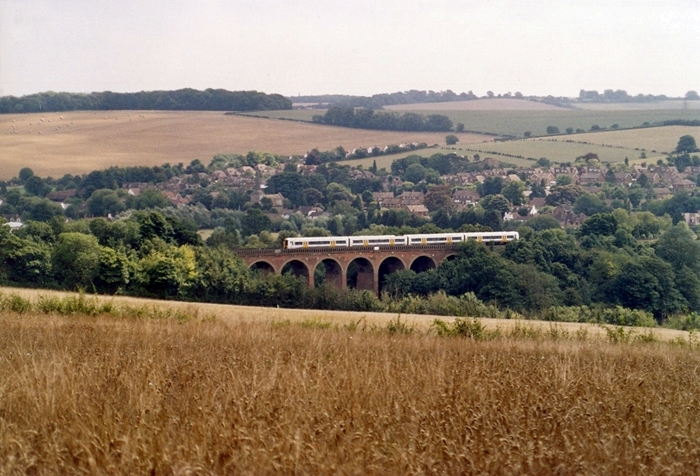 A tranquil scene includes a Class 375 heading over Eynsford Viaduct, heading in the Otford direction. The village, a parish of Sevenoaks, is seen in the background, amongst a delightful array of trees. © David Glasspool