Shortly before the formation of the SE&CR Joint Managing Committee, significant changes were made to Gravesend station. Structural alterations included the dismantling of the two trainshed roofs and the conversion of the two central sidings into through running lines. Single-storey yellow-brick extensions were made on both eastern and western elevations of the main ‘’up’’ side station building, and standard ornate canopies came into use on both platform surfaces, these being 230-feet and 145-feet long on the ‘’up’’ and ‘’down’’ sides respectively. These came complete with triple-vaulted glazed sections over the building entrances (as per Herne Bay, on the ex-LC&DR Thanet route). A small porch canopy was also added to the southern façade of the ‘’up’’ building. A 105-foot-long roofed lattice footbridge came into use between the platforms, being held aloft over the tracks upon two pairs of iron struts. An engine stabling line was created behind the ‘’up’’ platform, to the west of the main building, which fed a turntable. This was complemented by a 40-foot-long pitched-roof water tower erected upon the platform surface here, comprising a yellow-brick base detailed with arched windows. Two short sidings were retained to the east of the ‘’up’’ side building, but the small wagon turntable and the wagon shed were both abolished. An array of clapboard huts also began to emerge on this site. An additional eastward-facing rolling stock stabling siding was laid to the west of the layout, beyond the road bridge and beside the incoming ‘’down’’ line. To control the revised layout, a second, much larger signal box was commissioned. This was positioned within an excavation cut into the chalk beside the aforementioned stabling siding. The signal cabin comprised a solid brick base, but demonstrated an upper timber half, complete with SER sash-style windows. This cabin became No. 1 Box, and the existing SER cabin to the east was subsequently designated No. 2 Box. On 1st July 1899 Gravesend (SER) became Gravesend Central, and the ex-LC&DR terminus became Gravesend West Street.


Southern Railway ownership from 1923 onwards saw a further wave of alterations. These began with the closure of No. 2 Box at the eastern end of the layout on 24th June 1928, the larger No. 1 cabin assuming its functions. The SR quickly began electrifying ex-SE&CR suburban lines, and by 1926, third rail had reached Dartford, limited electric services commencing on 10th May of that year. Subsequent extension of the electrified network to Gravesend occurred in July 1930, scheduled electric services commencing on 6th of that month. As part of this scheme, platforms at Gravesend were extended at their western ends using Exmouth Junction-manufactured prefabricated concrete, and the London end of the ‘’up’’ surface was rebuilt into this material from brick. Concrete bracket lampposts appeared on the extensions, although the original brick sections of platforms had earlier acquired the SR’s distinctive swan neck variant. Naturally, ‘’Target’’ name signs had also appeared at the site. The 1930 electrification also resulted in the abolition of the ‘’up’’ side locomotive turntable, but the feeding track was retained, and the aforementioned platform extensions saw a bay for out-of-service Port Victoria trains, created. The turntable had become surplus to requirements since the Hoo Peninsula branch services were operated in push-pull fashion, which avoided the need for locomotives to run round stock, or be rotated. Existing at this time as the end of the electrified section of route, the berthing siding beside No. 1 Box also received third rail, allowing the stabling of an electric unit at the site, without blocking one of the platform lines.

Despite the 1930 electrification, steam-hauled services of course remained eastwards from Gravesend, down the Medway Valley Line. From 14th May 1932, steam shuttles also commenced to the SR’s then newly opened terminus at Allhallows-on-Sea, out on the bleak marshes of the Hoo Peninsula. In conjunction with the Gillingham electrification on the ‘’Chatham’’ Main Line, third rail was subsequently extended beyond Gravesend, down to Maidstone West, and also laid upon the connecting spur between North Kent and ‘’Chatham’’ Lines at Strood. The extended scheduled suburban electric timetable over these routes commenced on 2nd July 1939. Gravesend Central continued to retain a healthy contingent of steam activity in the form of goods yard locomotives and those engines which powered the aforementioned Allhallows and Port Victoria shuttles. It was at the time of the 1939 scheme that the brick road bridge at the western end of the layout was rebuilt in concrete.

Changes to Gravesend’s railways were substantial on the advent of British Railways in 1948. Passenger services along the Gravesend West branch ceased completely on 3rd August 1953, but nevertheless, the ex-SER station retained its ‘’Central’’ suffix until 14th June 1965. In the meantime, most shuttle services to the Isle of Grain had been diverted to Allhallows-on-Sea, although a daily train did exist between Gravesend and the 1951-opened terminus at Grain Oil Refinery. Platforms were again lengthened with concrete cast components in June 1954, to accommodate ten vehicle EPB formations which were then being introduced to alleviate overcrowding on peak time trains. It was circa 1955 that the ornate clover-patterned canopy valances were replaced with plain timber variants.

The closure of the Allhallows spur on 3rd December 1961 saw the total withdrawal of all passenger shuttles from Gravesend, over the Hoo Peninsula, and steam traction at the site was also eradicated with the closure of the station’s cramped goods yard on the same date. Cessation of steam saw the removal of the pitched-roof water tank, but the supporting brick base was retained on site, this subsequently receiving a flat tarmac-covered roof. The bay line was also removed, and the track bed in-filled to bring the surface up to platform height. The signal box was the next casualty, as the North Kent Line was converted from semaphore signal to colour light operation. Closure of No. 1 Box occurred on 14th March 1971; the adjacent berthing siding was also decommissioned. It was around this time that the redundant goods shed was demolished, and the former goods yard site turned over for car parking. A CLASP office also appeared behind the eastern end of the ‘’down’’ platform. An extensive station refurbishment began in 1983 produced spruced up brickwork and restored platform canopies, the latter of which continued to retain their fine glazed vaulted sections. Within its 2007 Business Plan, Network Rail outlined proposals to redevelop Gravesend station to provide ‘’improved facilities’’. These included the addition of platform lifts within a new footbridge, in addition to a revised platform layout (more of later). 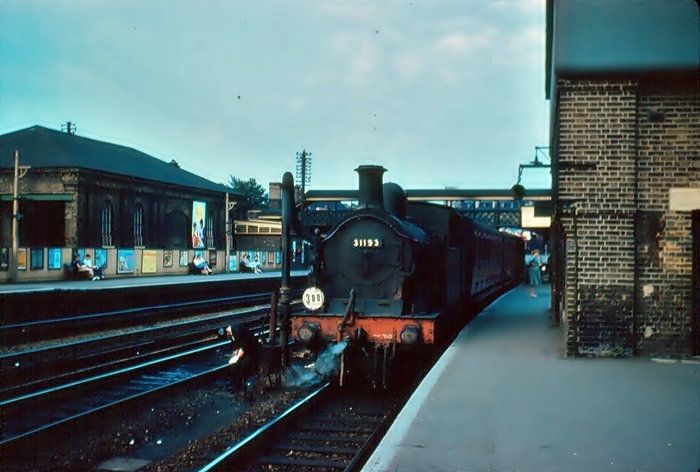 This splendid eastward view from the London-bound platform shows SE&CR ''H'' Class 0-4-4T No. 31193, after arrival from Allhallows-on-Sea with a push-pull coach set. As the locomotive undergoes a refill, one can observe that the conductor rails of the ''up'' through and ''up'' platform lines are laid on the opposite side of the tracks to the water column, for the safety of locomotive crews. On the right is the water tower, the base of which existed until summer 2013, whilst on the left, across the running lines, is the huge goods shed, the site of which now forms part of a car park. Worthy of note are the concrete bracket lampposts, ''Target'' name signs, and the plentiful advertisements on the timber fencing lining the rear of the ''down'' platform. © David Glasspool Collection 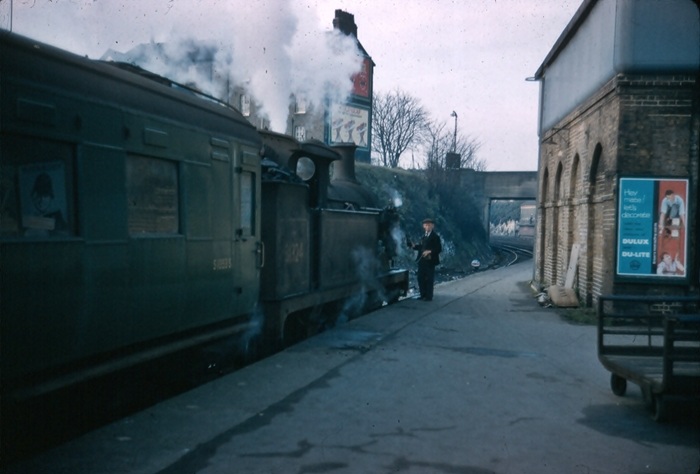 A London-bound view shows the driver, complete with oil can, alongside his locomotive: ''H'' Class No. 31324. The engine, complete with Maunsell push-pull set, is seen stabled in the bay platform which was used by the Allhallows-on-Sea shuttle service between turns. This cleared the through platform lines for electric services. On the right can, again, be seen the prominent water tower, whilst in the background, beyond the road bridge, can be seen the SER-designed signal box. © David Glasspool Collection 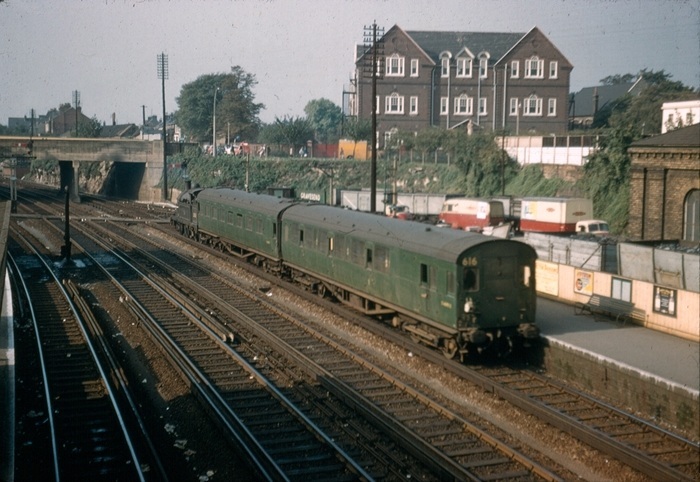 A London-bound view from the lattice footbridge reveals a crowded goods yard, coal wagons and British Railways road vehicles being aplenty - this was just 1½ years before the withdrawal of goods facilities. Stabled at the London end of the ''down'' platform is an ''H'' Class 0-4-4T with Maunsell push-pull set No. 616. Of interest in the background is the lengthy track foot crossing, cutting diagonally over all four lines, in addition to the semaphore signals. The conductor rails can be seen swapping sides around the water column, on the left. © David Glasspool Collection