Gravesend has an interesting history and is a town rich in heritage, retaining many historically important structures. The town was officially established as the ''Gateway to London'' by boat in 1562, and since 1909 has been controlled by the Port of London Authority.

It was the London & Greenwich Railway of 1833 which first proposed a railway through Gravesend, as part of its endeavour to reach Dover via the Thames Estuary and Medway towns. Indeed, as it later transpired, the company was limited to operating services between London Bridge and Greenwich, the latter having been reached on 24th December 1838 on an extension from Deptford. It was therefore left to another independent concern to establish the first rails in the Thames riverside town, namely the ‘’Gravesend & Rochester Railway’’ (G&RR). This company laid a single-track line in-between Denton, on Gravesend’s eastern outskirts, to Strood, partially utilising the route of the already extant ‘’Thames & Medway Canal’’ through Higham and Strood Tunnels, each 1531 and 2329 yards in length respectively. In brief, the single line through the tunnels rested partially on the canal towpath, and partially on timber struts, the latter of which were sunk into the canal bed. The terminus at Denton comprised two platform faces serving a double-track, and an eighteen trains per day service began on 10th February 1845, an intermediate stop at Higham opening on the same date. The G&RR ran this line for barely a year when, at the end of 1845, it was absorbed by the growing South Eastern Railway. The SER had already taken over the London & Greenwich operation on 1st January of that year, a 999 year lease at £45,000 per annum (£3¼ million by today’s prices) being agreed. Subsequently, in 1846, the company received Royal Assent for the construction of the North Kent Line, a suburban route spurring off the original London & Greenwich metals at what would become ‘’North Kent Junction’’. It was to pass through Lewisham, Blackheath and Woolwich, thence onto the Thames Estuary towns of Dartford and Gravesend, before finally reaching Higham and Strood. The scheme involved buying out the G&RR and Thames & Medway Canal Companies at a cost of £310,000 (£21,505,000 at 2007 prices), and draining Higham and Strood Tunnels to permit the laying of a double-track.

The North Kent Line opened in its entirety on 30th July 1849, and with it the SER commissioned a completely new Gravesend station, within the town centre. Closures came to the termini at Denton and Strood, but a through affair was retained at Higham. Although the route later became a heavily-used commuter line, the layout at Gravesend was built to seemingly main line standards, upon a gentle curve. Initially, two platform faces were available, these being separated by a track bed capable of accommodating four lines. It was a common SER practice to provide a pair of through tracks at those stations which were likely to become bottlenecks as traffic increased, and indeed, the company implemented such an approach at Tonbridge, Paddock Wood, and Ashford stations on its main Dover trunk line, in addition to carrying out similar work at its Canterbury site. Interestingly, however, the two centre tracks at Gravesend were initially terminating sidings, rather than continuous loops, the ‘’up’’ and ‘’down’’ centre sidings being westward and eastward facing respectively (all descriptions are later illustrated in diagrammatic form). The main station building was a graceful two-storey-high affair, situated behind the ‘’up’’ platform. It was constructed from the SER’s favoured yellow brickwork, frescoed with stone lining, and was a product of architect Samuel Beazley, who had been commissioned to design all stations in-between Dartford and Gravesend inclusive. The structure measured approximately 92-feet across, and comprised a pair of two-storey-high towers flanking a single-storey booking office. The former comprised accommodation for the Station Master. Beazley had produced a scaled-down, but equally attractive, version of this building at Erith. The ‘’down’’ side structure at Gravesend was much more modest in comparison, doubtless because it just served as a second booking office and lacked the Station Master’s accommodation of the ‘’up’’ side. Nevertheless, it was built from the same yellow brick, lined with stone.

Both SER and LC&DR companies experimented with overall roofs at intermediate stations during their earliest years. The former commissioned such structures at Ashford and Canterbury, whilst the latter also implemented trainsheds at its own Canterbury site, and at Dover Priory. Gravesend was similarly treated: the two outer platform lines were each host to their own pitched-roof trainshed, which protected both platform and track from the elements. The roofs were partly supported from the platform buildings, but also rested upon a series of iron struts which were installed within the gap between the platform lines and the central sidings. These roofs were not generally elegant structures; rather, they were basic fabrications comprising a metal frame clad with timber. As per the covered London termini, smoke from locomotives would become trapped within them, and this effect was emphasised as a result of their comparatively small size.

A large goods shed was positioned on the ''down'' side, to the west of the platform building, and although it had the physical width to house at least three tracks, it was fed by only one. Including the goods shed line, there was a maximum of three westward-facing tracks on this site – the station may have been spacious in terms of platforms and running lines, but its freight handling capacity was fairly limited, especially when compared with the LC&DR’s terminus which later opened in the town. A further single-track wagon shed was also in evidence at the eastern end of the site, beside the incoming ‘’up’’ line. It was a westward-facing structure, and a diminutive wagon turntable fed it and two other short sidings. The layout was controlled by a small SER-designed signal box, positioned at the eastern end of the site, beside the ‘’down’’ line. It was virtually identical in appearance to the example which still exists today at Snodland, on the Medway Valley Line.

As previously mentioned, the LC&DR opened its own Gravesend station, this existing as a terminus at the end of a five-mile branch line from Fawkham Junction. Services commenced along this line on 10th May 1886, and as a consequence, the existing North Kent Line station acquired the suffix ‘’SER’’, to distinguish it from the later LC&DR site. The latter was appropriately named ‘’Gravesend C&D’’. 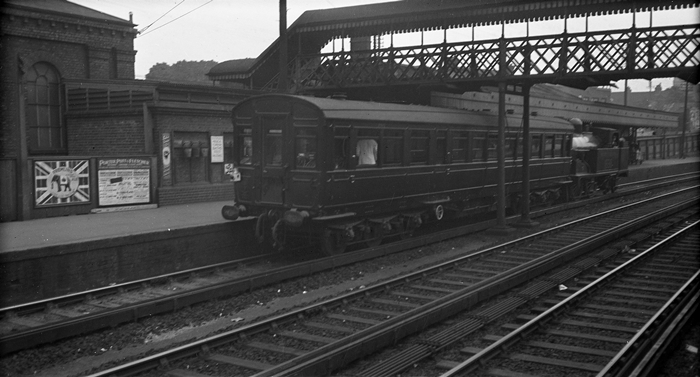 This view from about 1935 shows the ''down'' platform occupied by the ex-LB&SCR's Directors' Saloon, possibly in use on that day for an inspection of the Allhallows-on-Sea branch by SR management (thanks to Brian Kidman for identifying). The carriage, which in the above view is being hauled by an ex-LC&DR ''R'' Class Tank, can now be found on the Bluebell Railway. Third rail is in place, the familiar lattice footbridge is prominent over the tracks, the original SER-styled canopy valance is in evidence and finally, the end of the now demolished goods shed can just be seen on the left. Notice here that the platform is still constituted wholly of the original SER brickwork. © David Glasspool Collection 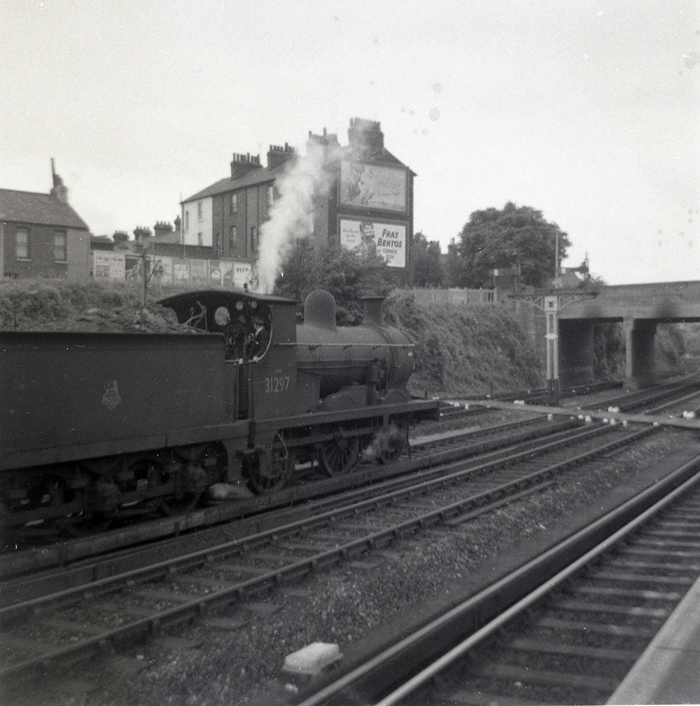 Gillingham-allocated ''C'' Class 0-6-0 No. 31297 is seen parked on the ''up'' through line, at the western end of the station. The through lines here were quite often occupied by empty carriage stock waiting to form the next trip to Allhallows-on-Sea. In evidence is a lengthy track foot crossing for staff, intercepting the main running lines diagonally, and ''home'' signals for the ''up'' loop and ''up'' through lines. © David Glasspool Collection 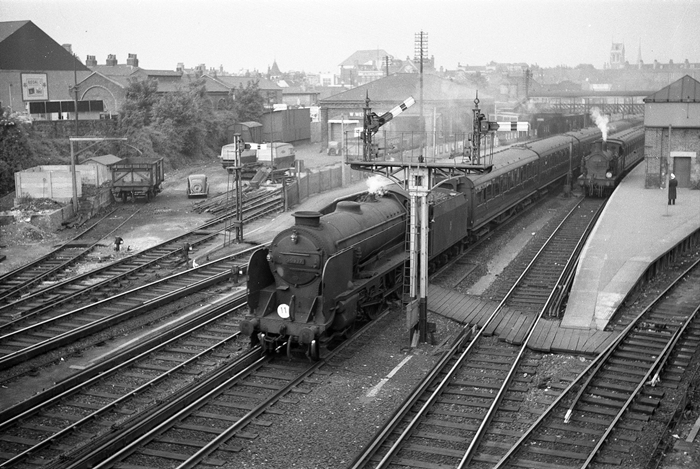 Kent Coast Electrification works on the ''Chatham'' main line during 1959 saw some interesting diversions via the North Kent route. Here, we see one such service, which depicts ''Schools'' No. 30937 ''Epsom'' sailing through Gravesend non-stop, at the head of a mixed rake of Maunsell and Bulleid carriages. To the right can be seen ''H'' Class No. 31512, which was working the push-pull service to Allhallows-on-Sea. There is plenty of detail in this shot: the goods shed and yard, complete with loading gauge and vintage BR road vans. On the right, in the foreground, we can see the start of the bay line, where Allhallows-on-Sea shuttles were often stabled. The water tower is seen with tank and pitched roof, whilst behind is the SER lattice footbridge. Semaphore signals remained in use here until 1971. © David Glasspool Collection