Halling was a later addition to the 1856-opened northern extension of the Medway Valley Line, coming into use on 1st March 1890. Two platform faces were provided from the outset (which were not staggered, unlike many of the earlier stations along the line) and the main station building was positioned on the ''up'' side. This building was somewhat of a peculiarity: it was single-storey, but rather unusually constructed in brick. Most stations opening in around this period - especially intermediate stops - would invariably have received the SER's economical clapboard structures, but Halling seems to have escaped this. When Yalding's clapboard structure was burned to the ground during a station fire in 1893, it also received a virtually identical brick station building to the example here - evidently the SER was not keen to risk another wooden fabrication at the site! Conformity did prevail in some instances at Halling, the station building having been graced with the quintessential SER arched canopy (still in evidence at Yalding). This was flanked by a signal box, located at the northern end of the ''up'' platform, wholly clapboard and to the SER's in-house design with sash-style windows. A timber waiting shelter with an angled roof was used as platform accommodation on the ''down'' side, and despite the station being a later addition, the arrangement here still did not have a footbridge from the outset, a lattice one being provided some four years afterwards. The waiting shelter shared a particular feature with other such structures on the SER network: it opened with its roof lacking a valance. Such did not appear until after the formation of the SE&CR, but when it did, the design still reflected the style of the pre-1899 SER.

As a later station, it never boasted the large goods sheds at one time seen at Snodland and Aylesford, but instead was host to just a pair of sidings, which trailed southwards off the ''up'' line, to the north of the platforms. The station did, however, have a single-track link with Halling Manor Cement Works, the connection of which trailed off the ''down'' line, immediately south of the platforms, but it could never claim such a large goods facility as its own! Despite only having the two aforementioned sidings, these still had a decent innings and in some cases, lasted in service longer than those stations with a goods shed, not finally closing until September 1961.

Over the years there have been a number of notable changes at the station, a couple of which have already been touched upon. Electric working began on the northern part of the Medway Valley Line on 2nd July 1939 to as far as Maidstone West, but steam services continued to run along the route in its entirety. This then ceased with the implementation of the Kent Coast Electrification, full electric operation along the whole line beginning on 12th June 1961 - the station lost its semaphore signals, just like at Maidstone West, in conjunction with this. The signal box here saw decommissioning in February 1972, during a period when many quaint cabins saw closure as a result of new signalling centres coming online and neighbouring signal boxes taking over their responsibilities, as part of rationalisation. Although the main building survives to this day, unfortunately the station could not totally avoid the dreaded ''CLASP'' policy and in 1973, the ''down'' waiting shelter succumbed to a featureless replacement, reminiscent of those awful structures still on the platforms at Dartford. This instalment was coupled with the removal of the delightful SER-designed canopy of the main building, leaving passengers without any form of protection from the elements. The situation did not improve, Network SouthEast merely providing bus shelters on either platform in 1991. 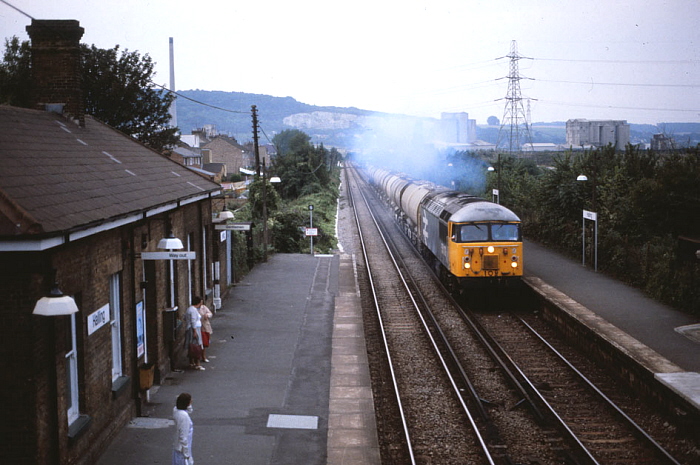 Class 56 No. 56109 is seen hauling cement tankers from Halling Rugby Cement Works in 1984. This was an unusual

Tinsley 56 turn for a while, with the 56 running light down through Strood in the early evening, then reversing into the

works and then taking the cement out towards Maidstone. At this time, the station retained concrete bracket lampposts, 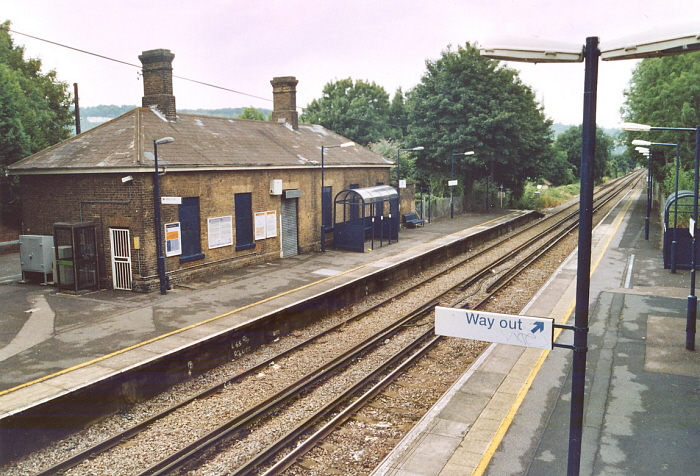 have gone, and the windows are now boarded up. Bus shelters now provide the only protection from the 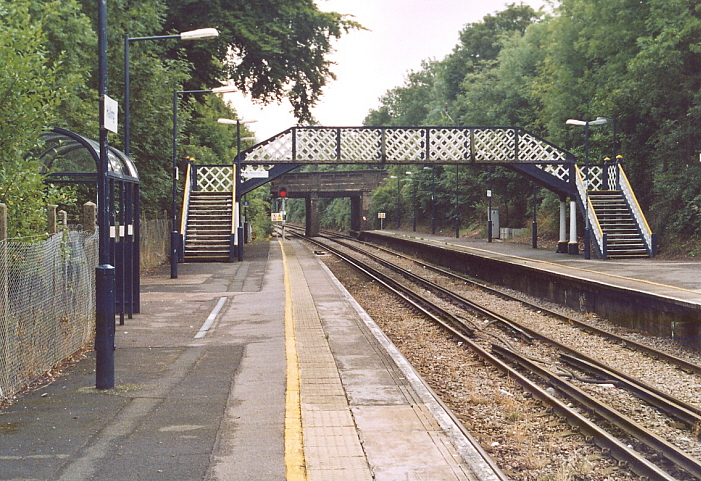 A southward view from the same day reveals that at least the lattice footbridge provides some hint of former glory,

the paint scheme indeed doing it justice. The bus shelter on the left is the same one which is on the far right of the