Harrietsham came into use with the 18¾-mile-long Maidstone to Ashford route on 1st July 1884, and comparatively speaking, has stood the test of time well. The station is typical of the route, and as mentioned elsewhere on the website, the site is a virtual carbon copy of that which was established at nearby Hollingbourne, save for a couple of detail differences. Standard buildings were provided here: the ‘’up’’ platform was host to a crème brick structure of 103-feet in length; the ‘’down’’ side demonstrated an attractive 30-foot-long brick-built waiting shelter. With reference to the former, this was two storeys high at its tallest section, and in common with several LC&DR stations, the building included orange-lined arched window frames. Such features were also incorporated into the ‘’high-level’’ building at the rebuilt Maidstone East in 1884, in addition to being readily identifiable on the other crème brick builds at Bearsted and Hollingbourne. Platform canopies along the route were based on a standardised flat-roof design demonstrating an intricate icicle-patterned valance: a 30-foot-long example extended from the northern elevation of Harrietsham’s main building, this of which was supported by four cast-iron struts. This canopy was matched in design and length by that of the ‘’down’’ side waiting shelter; however, the latter was of reduced depth, and was supported by two cats-iron struts and the side walls. In common with all intermediate affairs on the 1884 route, no footbridge was provided at Harrietsham; a track foot crossing, at the eastern ends of the platforms, was instead provided. Luxuries such as footbridges were omitted from several stations on both SER and LC&DR networks from the outset. However, with the Board of Trade tightening standards around 1890, a number of these structures were later installed by the rival companies, but many stations on secondary routes still continued without them.

Like at Hollingbourne, the goods yard at Harrietsham was in evidence on the ‘’up’’ side, to the east of the platforms. A complicated track layout here, with numerous points and Y-formations, eventually produced a pair of westward-facing sidings and one eastward-facing dock line. The latter was a common feature; all those stations opened between Borough Green and Hothfield inclusive, were built with dock platforms, and such provision made it possible for the loading of cattle at these sites. The dock line and the southern-most of the sidings at Harrietsham were joined by a single connecting line, and straddled over the latter was the goods shed. This was built to a standardised design, which had appeared at both Hollingbourne and Bearsted: the structure was just under 65-foot in length, by about 30-foot wide, and accommodated a single track. Attached to the goods shed’s western elevation was a small, 15-foot-long, 10-foot-wide appendix. The entire layout was signalled by outside contractor Saxby & Farmer, and one of this company’s attractive signal boxes was in evidence at the eastern end of the ‘’down’’ platform. Again, the cabin was to a design standardised along the 1884 route, with a brick base, a timber upper-half, and a slated pitched-roof.

During the SE&CR’s tenure, the front portions of the intricate canopy valances on both ‘’up’’ and ‘’down’’ sides, were removed. Such also occurred at nearby Hollingbourne, and in both cases, it is not clear why, since counterparts at Bearsted, Charing, and Lenham escaped such modification. Under Southern Railway ownership, this station changed little. The ‘’down’’ platform was rebuilt by the company in the then prevailing Exmouth Junction-manufactured prefabricated concrete; even so, Harrietsham appears to have retained the traditional Victorian diamond-shaped gas lamps beyond this time. It was left to British Railways to implement the most severe changes and, naturally, many of these were undertaken in conjunction with the Kent Coast Electrification. The goods yard was subject to closure on 1st May 1961, just over five months before the commencement of the first scheduled electric services along the route. In preparation for the latter, a prefabricated concrete footbridge was installed to the immediate east of the station structures, in common with several stations along the route, to supersede the existing track foot crossing. Scheduled electric services began on 9th October 1961, to existing steam timings, and the full accelerated timetable came into use on 18th June of the following year. The electrification also resulted in the abolition of the 19th Century gas lamps.

The signal box here was one of the route’s earlier casualties, closure coming on 5th November 1972. Approximately twelve years later, the station was subject to a restoration exercise, in conjunction with many other sites along the route. This included the cleaning of the crème brickwork of both platform structures, and the simplification of the canopies. The latter involved the complete truncation of the ornate sections of the valances. Finally, circa 2003, the ‘’up’’ and ‘’down’’ platform surfaces were lengthened at their eastern ends in preparation for the complete conversion from slam-door to sliding-door stock operation. 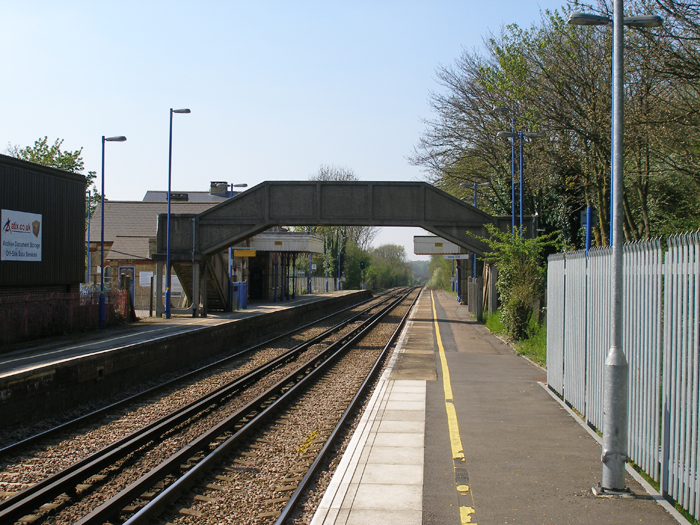 A westward view reveals the two 1984-simplified canopies framed by the 1961 prefabricated concrete footbridge. The dock line formerly terminated on the far left, but the site of this line has now been built on, as evidenced here. However, of historical note is the vintage railings on the far left, still painted in Network SouthEast red. © David Glasspool 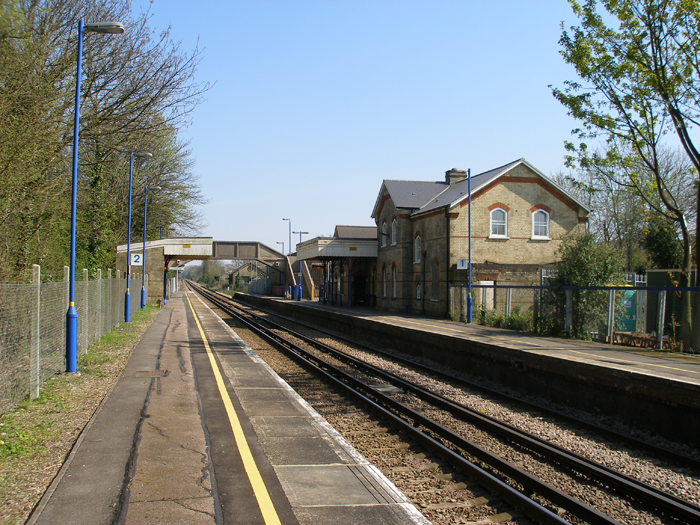 An eastward view better reveals all station structures, including the goods shed in the background. As per all waiting shelters on this section of line, the example at Hollingbourne has had its windows bricked up. The station building sports a recently slated roof, and unlike its counterpart down the line at Hollingbourne, has suffered less from boarded up windows. © David Glasspool 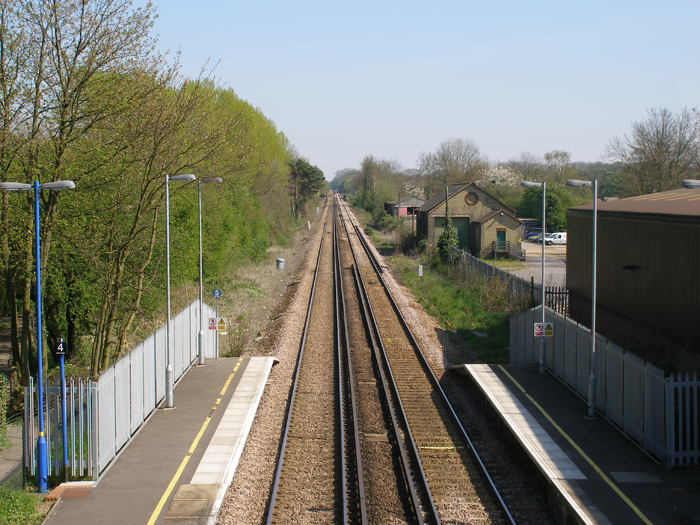 A second eastward view, this time from the footbridge, shows the former goods yard area, complete with surviving crème brick shed, and the recent platform extensions. The goods shed is of a standard design, and a similar example still exists at Bearsted. © David Glasspool 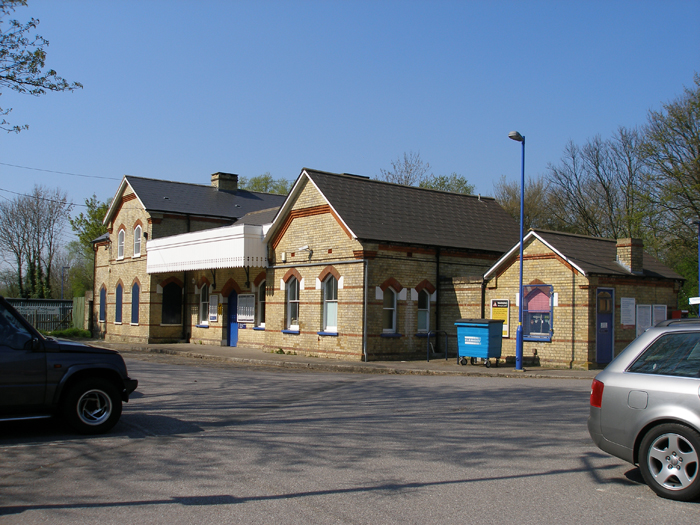 Harrietsham's façade presented a clean and tidy appearance when viewed. Only those windows on the bottom floor of the two-storey section were boarded up. Notice that the canopy on this side of the building retains an ornate valance: this is identical to those valances which formerly graced the platforms. © David Glasspool