In 1801 a concern known as the ''Thames & Medway Canal Company'' completed a canal between the towns of Gravesend and Higham which was designed as a passage for military vessels between the dockyards at Woolwich and Chatham, boats having the benefit of avoiding the long and exposed journey around the Hoo Peninsula. The canal was later extended eastwards to Strood after a great engineering feat which saw a 2¼ mile long tunnel bored through the landscape between this town and Higham, making it the longest tunnel in Britain at the time. Fully opened in October 1824, traffic levels along the canal were far less than envisaged and in 1844, a single-track line was laid through the tunnel, beside the existing canal by the newly formed ''Gravesend & Rochester Railway''. Gravesend and Strood now had their first railway service. The line was, interestingly, half-rested on the tunnel's towpath and half-supported by numerous wooden struts sunk into the canal's bed. Higham was provided with a station immediately before the western entrance of the tunnel, opening with the line on 10th February 1845, although it was a good mile or so from the village it purported to serve. The Gravesend terminus was also located one mile east of its town's centre, terminating at Denton.

In 1846 the ''South Eastern Railway'' received Parliamentary approval to construct a new suburban line which would leave the original route of the London & Greenwich Railway just east of London Bridge Station (the point of divergence latterly named ''North Kent Junction'') and take a route via Lewisham, Blackheath and Woolwich, thence onto the Thames Estuary towns of Dartford and Gravesend, before reaching Higham and Strood. To gain railway access beyond Gravesend, the SER absorbed the Gravesend & Rochester Railway and Thames & Medway Canal Company at a cost of £310,000, acquiring the 2¼ mile long tunnel in the process. The tunnel had been split by a fifty yard gap ("The Bombhole") in 1830 to allow barges to pass each other. What were now two separate halves became Higham and Strood Tunnels, being 1531 and 2329 yards in length respectively. It is worth noting that the section of canal between Gravesend and Higham remained in use until formal abandoning in 1934. Returning to 1847, the SER had begun upgrading the single-track line between Denton and Strood almost immediately after acquiring it and by August had completed the task of draining the tunnel of water, infilling the former canal bed and laying double-track throughout: Higham station gained a second platform during the work. To lay to rest any fears over tunnel weakness during conversion for railway usage, a loaded cannon was apparently fired inside it many times, but no chalk falls were recorded. Services from London to Strood commenced with the opening of the whole North Kent Line on 30th July 1849. The SER abandoned the concept of extending their North Kent Line across the Medway to serve Rochester, Chatham and Gillingham, and instead followed a course parallel with the river to Maidstone (West), services commencing throughout on 18th June 1856, Strood subsequently becoming a through affair.

Goods facilities were provided at Higham in the earliest days of SER operation, two such sidings and a shed being sandwiched in-between the ''up'' side platform and the tunnel portal. An additional siding was also provided on the ''down'' side. The SE&CR provided a new station building on a site immediately next to the existing structure, the latter of which was demolished. By this time a lattice footbridge had been provided - it seems common for early stations on both SER and LC&DR lines to have begun life with just a track-level crossing between platforms, more often than not used as an economy measure.

Regular electric services from the capital through to Maidstone West and Gillingham (via the connecting spur) commenced on 2nd July 1939, during the Southern Railway's on-going scheme of electrifying busy suburban lines on the South Eastern Division. Steam still appeared at Higham, however, in both the capacity of goods operations and summer passenger excursions to the Kent Coast. Such traction disappeared on through excursions, however, with the electrification of the ''Chatham'' line in June 1959, but it is possible that goods facilities at Higham avoided dieselisation - they ceased to function on 4th September 1961, but ex-SE&CR ''H'' Class tank engines were still extant along the line at Gravesend until at least 4th December 1961, when the branch to Allhallows-on-Sea closed. Further rationalisation of the site came on 17th October 1971 when the signal box closed and the then new Dartford Panel took over its functions; the former was subsequently demolished.

The ''North Downs Steam Railway'' arrived on the scene in 1981 and used the site of the former goods yard until more suitable accommodation could be found. As a result, the station saw its first steam locomotive in over twenty years when the aforementioned preservation society purchased 1955-built Robert Stephenson & Hawthorne 0-6-0 Tank Engine No. 13 from the ''Railway Vehicle Preservation Society'' at Chapple & Wakes Colne, Essex in 1983.

On 18th January 2004, Higham and Strood Tunnels were closed for the period of one year whilst major re-lining work was undertaken. There had been a number of chalk falls in recent years and a landslide at the site in 1999 resulted in four carriages of a passing train being derailed. Since then, a 20 MPH speed limit had been imposed on all trains, a severe reduction from the original 70 MPH line speed. The year long work involved lining the tunnels with steel and concrete. Links have been made between recent chalk falls and the year 2000-built Wainscott Bypass, which is routed over the top of the tunnel, its traffic vibration possibly affecting the tunnel's walls; drainage was also thought to have been affected. Journeys which would otherwise have used the tunnel were increased in time by thirty minutes, until reopening commenced exactly one year to the day after initial closure.

The name signs at Higham are unusual, for the text is not centred. David Glasspool 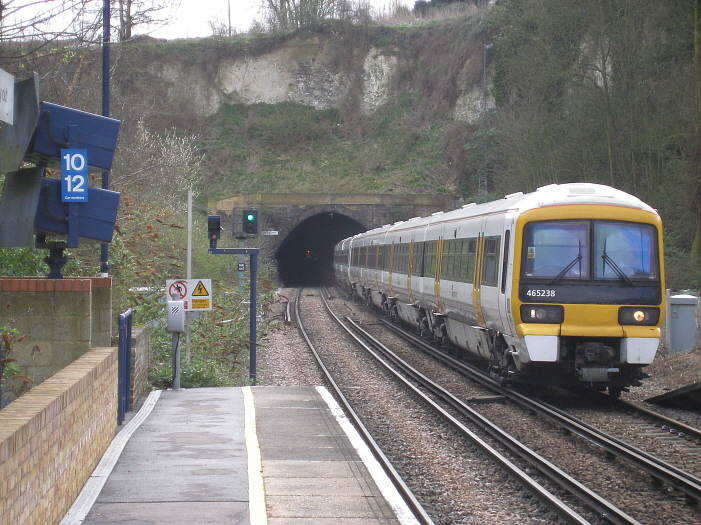 to Charing Cross semi-fast service. In the very background of the tunnel can just be seen the light of ''The

Bombhole'', a fifty yard gap in-between Higham and Strood Tunnels. Access to this in-between area is over

a farmer's field, and the land's owner originally received a one-off payment from British Rail for unrestricted 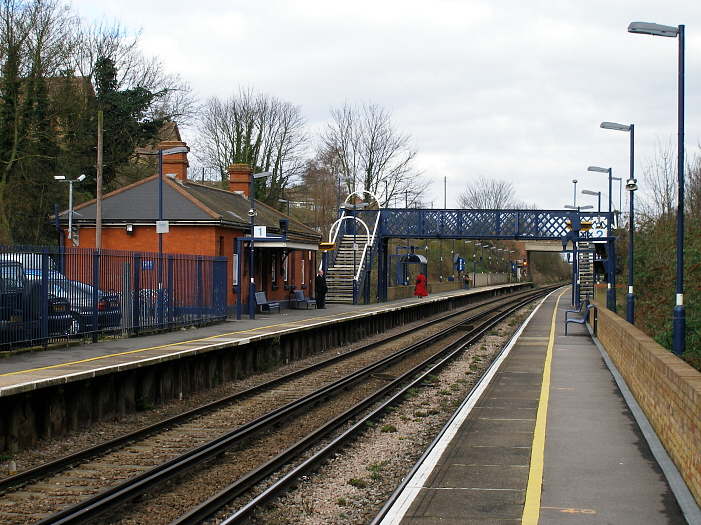 A London-bound view from the ''down'' platform shows the station building of SE&CR origin, the SER footbridge,

finally, the shelter of 1991 origin. Behind the low wall on the right was formerly a single refuge siding. 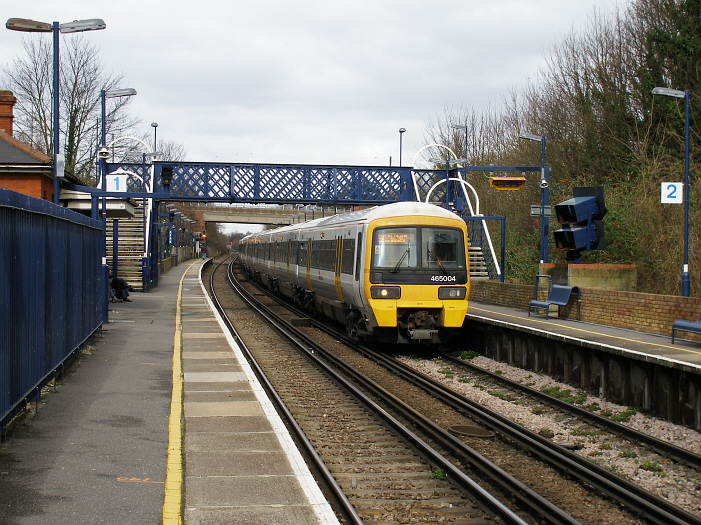 the ''down'' platform exists the remnants of the disused Thames & Medway Canal which, at this point, is just