Hollingbourne is one of a number of attractive country stations which opened along the Maidstone & Ashford Railway’s 18¾-mile eastward extension between the independent concern’s namesakes. The station came into use with the route on 1st July 1884, and was graced with attractive crème brick buildings. Crème brickwork had become a LC&DR trademark on the company’s Dover trunk line, and indeed, it continued to be used for station rebuilds at Bromley, Bickley, and Faversham, during the 1890s. As mentioned elsewhere on the website, stations on the Ashford extension were constructed to designs reminiscent of the structure earlier erected at Sevenoaks Bat & Ball. Of these sites, Hollingbourne and Harrietsham were virtually carbon copies of each other – there were only very slight variations concerning the number of sidings. The main buildings at these stations were positioned on the ‘’up’’ side: these measured about 103-feet in length (which included a small single-storey triangular appendix on the main structures’ eastern elevations), were two storeys high at their tallest section, and came complete with orange-lined arched window frames. Extending from the northern elevation of the main structures was a 30 foot-long, rectangular-shaped canopy, demonstrating an intricate icicle-patterned valance. The ‘’down’’ platform was equipped with a delightful brick-built waiting shelter, this of which also featured a canopy that matched the length and design of that on the ‘’up’’ side. No footbridge was provided; instead, a track foot crossing at the eastern ends of the platforms was used. Bearsted was of a similar breed to Hollingbourne and Harrietsham; it featured the main crème brick station building on the ‘’up’’ side, but this was instead arranged in a mirror-image fashion.

Goods facilities here were quite extensive in light of this being a rural station, deep in the Kent countryside. All sidings were positioned on the ‘’up’’ side, to the east of the platforms. One of these was an eastward-facing dock line – a common feature along the route – which terminated a short distance behind the ‘’up’’ platform, alongside cattle pens. To the east of this track were four westward-facing sidings, approximately 500 feet in length, all of which had a trailing connection with the ‘’up’’ running line. Sandwiched in-between the dock line and sidings was a goods shed: this was a through affair, built of crème brick, and was of a standardised design with a slated pitched roof. The shed resided over the single-track which connected the dock line with two of the four sidings; it was only possible to gain direct access to the building by running along the ''up'' line in the wrong direction, to make use of a trailing connection with the yard. The entire layout was signalled by Saxby & Farmer (as, indeed, was the whole line), and one of this contractor’s attractive signal boxes was positioned at the eastern end of the ‘’down’’ platform. Again, the cabin was built to a design which was standardised between Maidstone and Ashford: a yellow-brick base supported a pitched-roof timber upper half.

The station changed little under the Southern Railway, save for the addition of swan-neck gas lamps. The advent of the Kent Coast Electrification appeared to bring the greatest of change to most sites along the route. The first scheduled electric services commenced along the line on 9th October 1961, to existing steam timings. This had been preceded on 15th May of the same year by the closure of the goods yard at Hollingbourne, and the installation of a prefabricated concrete footbridge immediately west of the platform structures. Maidstone East’s layout was re-signalled with three-aspect colour lights during 1962, and on 8th April of that year, a new power box came into use at the site. This was followed by the commencement of the accelerated electric timetable on 18th June. Nevertheless, the rest of the line retained semaphore signals, and an Absolute Block System existed between Maidstone and Hollingbourne. This used Sykes Lock and Block instruments and allowed Bearsted signal box to be switched out of use. This remained the situation until 1984: on 14th April of that year, the Maidstone East Panel took control of the route between Kemsing and Hothfield inclusive, which resulted in the closure of the Saxby & Farmer signal cabins along the route (except for that at Hothfield, which remained until 16th February 1985 to control a siding). Semaphore signals were replaced at this time with three-aspect colour lights.

In about 1984, the station was subject to a general refurbishment, which included the cleaning of the crème brickwork and restoration of the platform canopies. With reference to the latter, these witnessed their ornate icicle-patterned valances truncated – the same occurred at neighbouring Harrietsham. Finally, circa 2003, the ‘’up’’ and ‘’down’’ platforms were lengthened at their western and eastern ends respectively in preparation for the complete conversion from slam-door to sliding-door stock on the route. 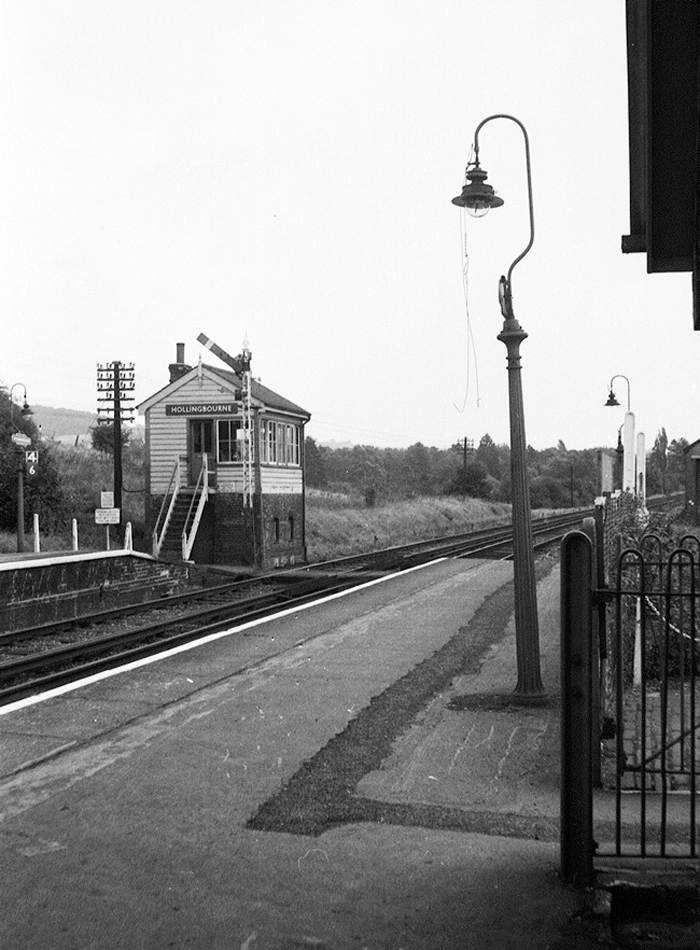 SR Swan Neck gas lamps are in evidence in this eastward view of the Saxby & Farmer signal box, which remained in use until 14th April 1984. BR "Totems" are on the lampposts, and a barrow crossing remained at the ends of the platforms at this time. The goods shed can just be picked out on the extreme right. © David Glasspool Collection 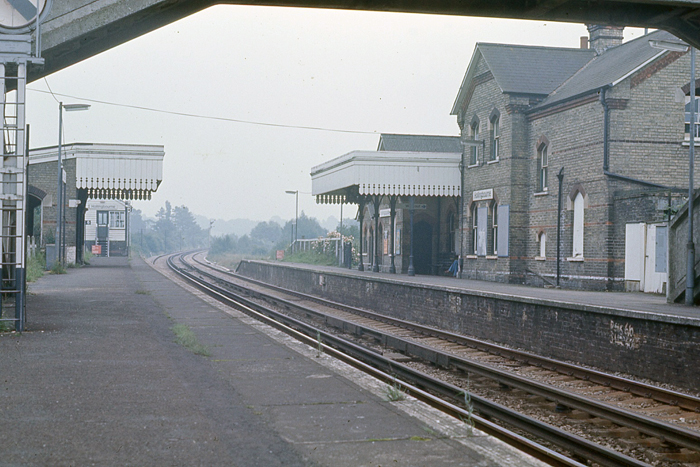 Looking towards Ashford in about 1980, the station presented a tidy appearance, although the brickwork was showing years of fumes and dirt. On the left, behind the "down" waiting shelter, is the signal box, whilst in the foreground on the same side is a banner repeater signal. The latter showed the position of the following signal arm, which may be obscured from the driver's view. The canopies had partially lost their ornate valances. © David Glasspool Collection 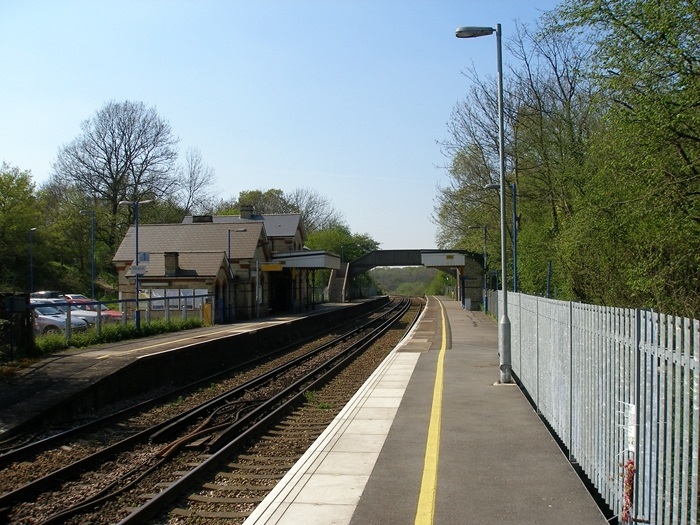 A westward view reveals that the station structures had been nicely cleaned since the picture from 1980. In the background is the 1961-installed prefabricated concrete footbridge, whilst in the foreground, to the right, is palisade fencing which marks the beginning of the platform extension. The dock line formerly terminated behind the section of the "up" platform seen on the left, the near side of the station building. This area has now become an extension of the car park. © David Glasspool