This is one of the Dartford Loop Line’s original stations, having come into use with the route on 1st September 1866. Although much of its historical interest has disappeared in comparatively recent years, with the removal of the clapboard, Bexley at least remains in part to illustrate how Lee once appeared to passengers. At both stations, the SER went to the trouble and expense of tunnelling a subway underneath the tracks, even though the platforms at Crayford and Mottingham (and the latterly opened sites, excepting Albany Park) had to make do with a track foot crossing. As suggested numerous times on this website, clapboard was very much the theme for the SER’s main structures from about 1860 onwards (naturally, there are earlier examples), and indeed, it was in abundance at Lee. The larger, and arguably main structure at this station was positioned on the ‘’down’’ platform, and was based on the same outline as that at Bexley, although was half the latter’s length. A flat roofed canopy, this extending from and running for the entire length of the station building, protected the platform. The valance was of the ‘’economical’’ looking design synonymous with the route, lacking the elaboration found on the stations of the original North Kent Line via Woolwich and Blackheath, but was infinitely better than the corrugated metal we see at many sites today. The composition of the ‘’up’’ side was a little more intriguing: here, the station building actually sat perpendicular to the platform. The structure itself was rather quaint, having a base which was roughly square, and demonstrated two small roof pitches. The immediate forecourt was treated to a canopy extending from the structure’s westward elevation, and like the ‘’up’’ side, clapboard construction was used throughout. The SER did actually reuse the perpendicular station building concept in its last years at Barnehurst, on the Bexleyheath line. The ‘’up’’ side was also host to its own canopy, it being similar in size to that on the ‘’down’’ platform. In the early 1870s, the SER implemented some modifications at Lee: these included extending the ‘’up’’ platform canopy westwards to span nearly twice its length, and also involved giving the structure an arched roof (as per Paddock Wood). Interestingly, the original canopy valance design was retained, this subsequently being perpetuated onto the then new extension. Although the canopy was lengthened, the station building was not, thus the former required a supporting wall at its rear. Naturally, this was fabricated from clapboard and stretched for 75% of the canopy’s length, but it did also serve to physically partition the platform from the entrance road.

Goods facilities here were at first meagre, but the yard was gradually enlarged over the years as freight traffic increased in importance. On opening, there was just a single siding provided; this was positioned on the ‘’down’’ side, just east of the station building, and terminated behind the platform. It was improved upon with the station alterations of the early 1870s, by the installation of a second siding immediately north of the existing track, again eastward facing. The latter was, from the outset, dedicated to coal, and a coal shed was erected across the track. The SE&CR made later improvements by expanding the site and inserting a further pair of sidings alongside the existing tracks. The layout was controlled by a SER-designed signal cabin, positioned some 150 yards east of the ‘’up’’ side station structure.

The Southern Railway electrified all three North Kent routes in 1926, which saw the procurement of a new platform gas lamp design to adhere to electrification’s ‘’modern image’’. Excepting this, no major alterations occurred at Lee during this company’s reign, and it would be left to the nationalised organisation to modify the layout. The first significant course of action under BR auspices was the lengthening of the platforms at their eastern ends during Spring 1955. This was undertaken using prefabricated concrete, and was in preparation for ten-vehicle EPB formations about to be introduced - the scheme also procured electric lighting. Peculiarly, this station would appear to have been re-signalled with the Tonbridge cut-off line in 1962, rather than being subject to the later signalling modernisation of 1970. Hither Green ‘’power box’’ took control of the immediate area from 4th February 1962, which saw a premature cull of Lee’s signal cabin and semaphores. To aid vision of the then new four-aspect colour light at the end of the western end of the ‘’up’’ platform, chunks of the canopy valance at each end, were removed. Finally, on 7th October 1968, the goods yard was subject to closure, concurrent with the facilities at Mottingham.

Thereafter, the station had a rather peaceful existence for many years. This was until the advent of the Network SouthEast (NSE) Business Sector in 1986. NSE set out to modernise numerous wooden stations still extant on the South Eastern Division (of which there were many), which saw the loss of much historical interest. However, in general, passengers witnessed improvements. During 1988, both Sidcup and Lee stations saw their ‘’up’’ side clapboard structures demolished and replaced with single-storey brick and glazed buildings. The latter were at least a decided step up from the CLASP abominations of the 1960s and 1970s. During the works, the ‘’up’’ side canopy lost the arched roof it had acquired during the SER’s 1870s alterations, but it also saw the restoration of the valance of 1866. The clapboard building on the ‘’down’’ side existed for a further three years, until this itself was demolished and replaced by a single bus shelter. The canopy of the structure was, however, retained, and an upward sloping roof was incorporated. Finally, in 1992, the platforms were lengthened yet again at their eastern ends, using the now familiar prefabricated concrete, in preparation for twelve-vehicle Networker formations (which, subsequently, were never given clearance to run). 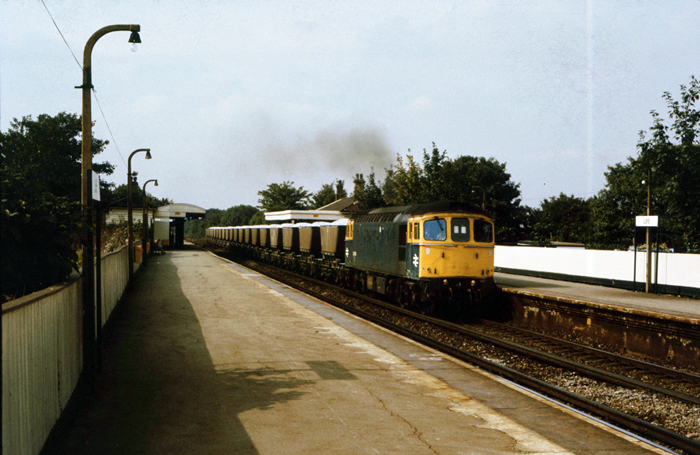 Having crawled around the Lee Spur, Class 33 No. 33209 is working hard to accelerate the 1130 (6H34) Mountfield Sidings to Northfleet BCI service conveying 19 PGA type wagons loaded with rock gypsum. Following the completion of gauge clearance works between Tonbridge and Battle, associated with the Hastings Line electrification, this was the final scheduled working of this service by a Class 33/2; from the following week, the service was booked to be worked by a Class 56. The twelve Class 33/2 locos were not only built to the narrow Hastings Line loading gauge, but were also fitted with slow speed control equipment specifically for operating these services around the MGR gypsum discharge line at the Blue Circle Industries, Northfleet New Works. Note the neat wooden fencing along the rear of each platform and the curved Up Platform canopy dating back to the SER’s station alterations in the 1870s, which can be seen in the distance. © David Morgan 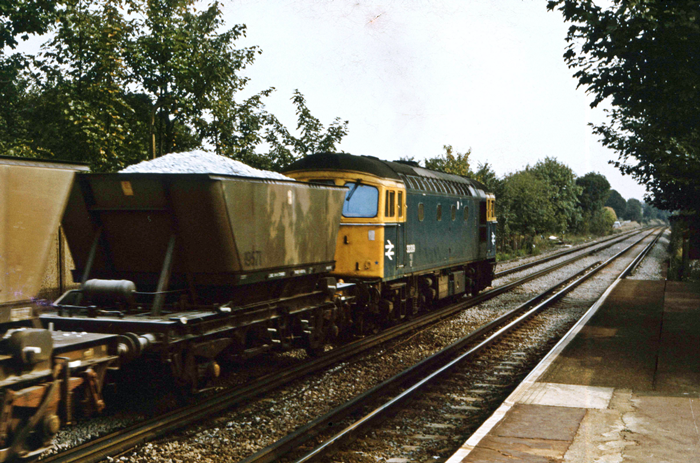 Class 33 No. 33209 heads east from Lee with the 1130 (6H34) Mountfield Sidings to Northfleet BCI service, conveying 19 PGA type wagons loaded with rock gypsum. These PGA wagons, owned by Blue Circle Industries, were a scaled down version of the numerous MGR coal wagon types and were fitted with similar automatic door opening gear for use on the discharge circuit at Northfleet Cement Works. © David Morgan