For such a rural location, on the eastern fringes of the New Forest, this is a station which once had a surprising number of sidings controlled by no less than three signal boxes. Today, however, the site is much rationalised, reduced to no more than the main running lines. The platform canopies have long since gone, passengers having nothing more than diminutive glazed shelters to protect them from the elements. Even the original covered footbridge, somewhat of a luxury for such an isolated site, has been dispensed with, but at least the Station Master's house still survives as testament to the site's earliest years.

Lyndhurst Road opened on 1st June 1847 with the "Southampton & Dorchester Railway". This was a 60½-mile-long extension of the LSWR's Nine Elms to Southampton line, which took a circuitous route via Wimborne in north Dorset. The line had originally been promoted by a wealthy Wimborne solicitor, Charles Castleman, and as a result became known as the "Castleman's Corkscrew". Through trains between Nine Elms and Dorchester did not commence until 29th July 1847 due to subsidence in the tunnel to the east of Blechynden station (100 yards east of what eventually became the main Southampton Central). Even after this, trains still had to endure a reversing manoeuvre at Southampton Terminus to switch between the routes from Nine Elms and Dorchester. This was remedied in 1858 by the opening of a curve linking both lines at Northam, the latter an eastern suburb of Southampton. However, so tight was the curve that it carried a 15 MPH speed restriction.

The very first arrangement at Lyndhurst Road is difficult to ascertain. Whilst the station opened on what was originally a single-track line, the presence of a passing loop and two platforms from the outset is quite probable. Providing a second track along much of the line through the New Forest formed part of a pledge made by the LSWR on 18th June 1856 to double 20 miles 43 chains of the route between Redbridge and Wimborne, work of which was stated at the time to be completed within twelve months.

The Lords of the Committee of Privy Council for Trade and Foreign Plantations of the Proceedings of the Department Relating to Railways for the Year 1856 (presented 20th August 1857).

On 13th July 1857, in the wake of inspecting the permanent way, the Board of Trade recommended that the second line of the above mentioned sections of route be commissioned for traffic. The section between Beaulieu Road and Brockenhurst, omitted from the 1856 proposal, opened for double track working on 1st September 1858 (The Railway Magazine, February 1956).

The eventual layout at Lyndhurst Road comprised a pair of partially staggered platforms situated on a gentle curve. On the "up" platform was a two-storey house for the Station Master, of red brick construction with a gabled slated pitched roof. Conversely, the "down" side comprised an elongated single-storey timber waiting shelter, and both platforms were host to canopies of a slightly upward slant, these of which lacked any decorative valance. Passage between the platforms was on the level, the earliest maps of the site showing no trace of a footbridge. Four sidings were in evidence: two north of the platforms, the remaining pair being to the south. Of the latter, these were situated on the "up" side of the line, one accommodating a wagon turntable and forming a head shunt for the other, this of which terminated a short distance behind the platform into a dock. Those sidings to the north flanked either side of the running lines to which, just like those to the south, trailing connections were made.

By 1897, a fully enclosed footbridge had been installed north of the Station Master's house and an additional section of canopy erected on the "up" side. The sidings had also increased in number, additions being made north and south of the platforms. A lengthy southward-facing goods siding was laid on the "down" side, south of the platforms; on the opposite side of the running lines, a stunted siding sprouted from the dock line. The dock line's head shunt had also been lengthened signifcantly in a southward direction, but the wagon turntable abolished. North of the platforms, a short siding was added on the "down" side; this required a head shunt manoeuvre into the existing siding there to access. Two trailing crossovers were laid between the running lines and three signal boxes were commissioned to control the new layout

Lyndhurst Road in 1909, prior to abolition of the level crossing. Click the above for a larger version. Drawn by David Glasspool 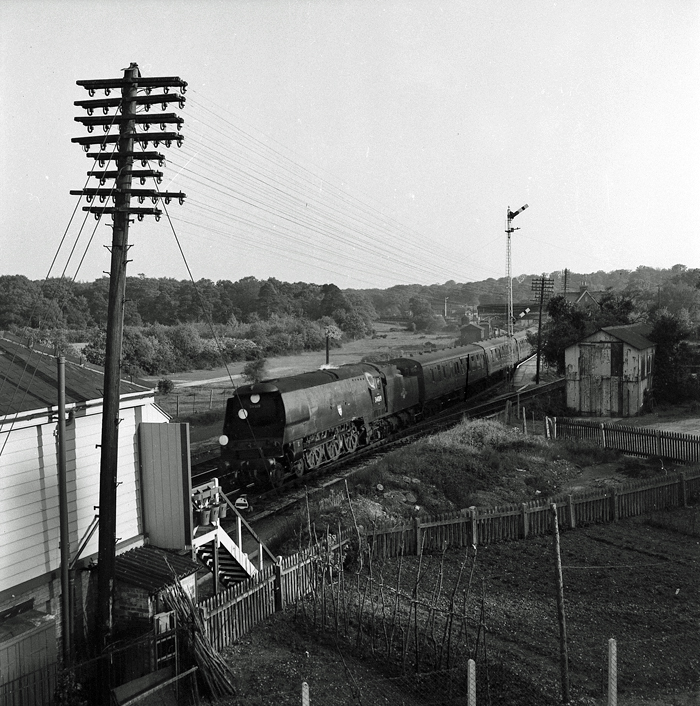 This splendid period scene, looking south from the road bridge, shows unrebuilt Bulleid Pacific No. 34019 ''Bideford'' passing through non-stop with BR Mk 1 carriages (complete with destination boards) in tow. On the right can be seen the ''up'' siding which terminated behind the platform, whilst its ''down'' side counterpart can just be seen in front of the locomotive. The double-height signal post with duplicated arms, seen at the end of the ''up'' platform, was required as a result of the station's footbridge obscuring drivers' views. On the left can be seen the rear of the LSWR-designed signal box, a trio of fire buckets being in evidence, whilst in the background on the right is the top of the Station Master's house and the enclosed footbridge. © David Glasspool Collection 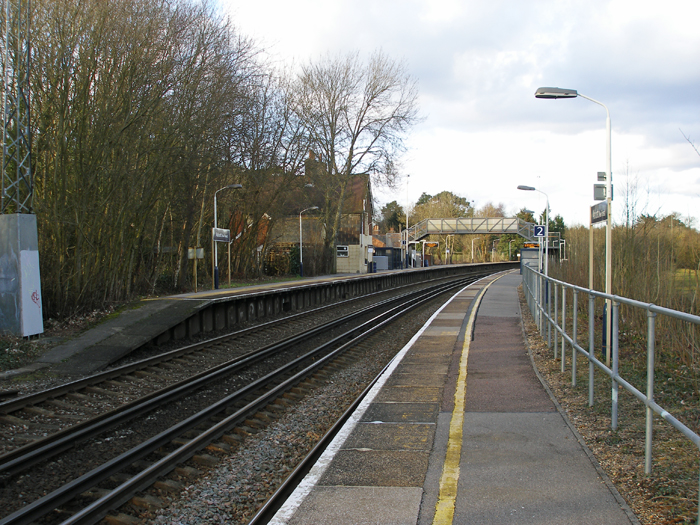 A northward view from the ''down'' platform still shows a rural scene, although the station has been subject to many economies since electrification. The ''up'' platform still showed holes in the concrete facing from where signalling cable once emerged. © David Glasspool 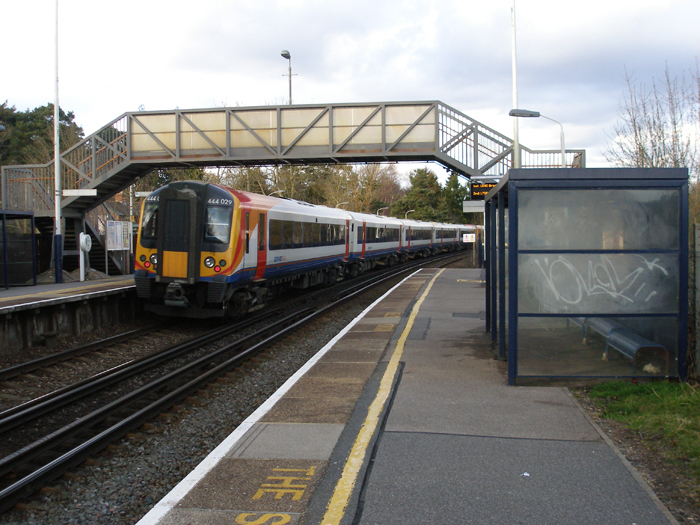 The depressing glazed shelters date from rationalisation works in the 1970s. Whilst the LSWR footbridge was also dispensed with at that time, the structure today seen is not that which replaced it. The current footbridge has appeared subsequent to privatisation. Class 444 unit Nos. 444017 and 444029 are seen passing through non-stop, Waterloo-bound. © David Glasspool