Significant change began in 1933 with the closure and partial demolition of the engine shed, but turntable and coal facilities remained on site for locomotives. The three-road shed was situated to the south of the platforms, on the opposite (''up'') side of the running lines to an extensive goods area which comprised some twenty sidings. In 1939 the Southern Railway continued with its electrification of ex-SE&CR suburban lines and in July of that year, third rail was extended from Gravesend and down the Medway Valley Line as far as the ''West'' station. Electric services commenced to the ''West'' station on 2nd of that month, concurrent with suburban electrics to Gillingham. That was by no means the end of steam on the line, however; between Maidstone West and Paddock Wood, the line remained without third rail and to bridge the gap, a push-pull operation was put in place, usually comprising of an ex-SE&CR ''H'' Class with Maunsell-designed stock. From 1959 onwards, pre-Grouping stock (of either SE&CR, LB&SCR or LSWR origin) became the norm, usually in the form of ex-motor coach sets.

During 1960, sections of conductor rail had began appearing on the Maidstone West to Paddock Wood section of the Medway Valley Line, but of course not in any operating capacity - yet. That would come on 12th June 1961 when the third rail was powered up for full electric operation - now London to Paddock Wood via Dartford could be traversed wholly by EMUs. At Paddock Wood, however, at least one could still see steam-hauled services via Tonbridge and Ashford still thunder through, although this finished on 17th June 1962, the accelerated electric timetable coming into use the following day. Despite the charm of steam having now disappeared, the electrification nevertheless brought improvement to services: any service from London to a station south of Maidstone on the Medway Valley Line now did not require a change onto the push-pull train at the ''West'' station - it could now be undertaken in a single swoop. What increasingly became the norm, though, was the terminating of Maidstone and Paddock Wood services at Strood, therefore North Kent Line passengers would still have to make a change, only this time further up the line. However, through services were at least maintained during the peak hours throughout the 1970s and 1980s, and at least in comfortable stock - 4 Cep and 4 Cig units were particularly common. A pair of 2-Hap units could generally be found on the former Charing Cross to Maidstone West semi-fast during the 1970s. Through working to Maidstone West via the North Kent Line ceased on the commencement of the Summer 1984 timetable. From August 1998, after privatisation, the stock on the Maidstone West route seemed to take a distinctly regressive step; the dreaded Class 508s arrived from the Wirral Lines, having been stored surplus to requirements for a number of years. In general, these units became contemptible abominations with those who used them, their low-backed seats, shocking reliability and grubby appearance being a far cry from the 4 Cep stock they replaced. On the plus side, however, the ex-Wirral Lines stock entered a refurbishment programme in Spring 2005, which should hopefully improve the travelling ''experience''.

Meanwhile, there had been some structural changes and layout reductions. In 1979, semaphore signals at the station were replaced with three-aspect colour lights, but the rest of the Medway Valley Line remained untouched. In conjunction with the re-signalling, the western-most bay was taken out of use, but the track remained in situ and the platform face was not cordoned off. Truncation of canopies occurred in 1989, that on what is today's platform 1 being cut-back to the length of only extending halfway down the one-storey high section of the main station building. The canopy on the opposite platform now only covered the area immediately surrounding the waiting facilities. Despite this there were at least some improvements, the canopy valances being restored at the same time and retaining the distinctive SER pattern. During 1998 the main station building received new roof tiles, but the remaining eastern-most bay platform had since gone out of passenger use and been de-energised, now only to be used by the odd wagon and track tamping machine. The former bay platform faces were then partially barricaded off with bright yellow railings in late 2005. 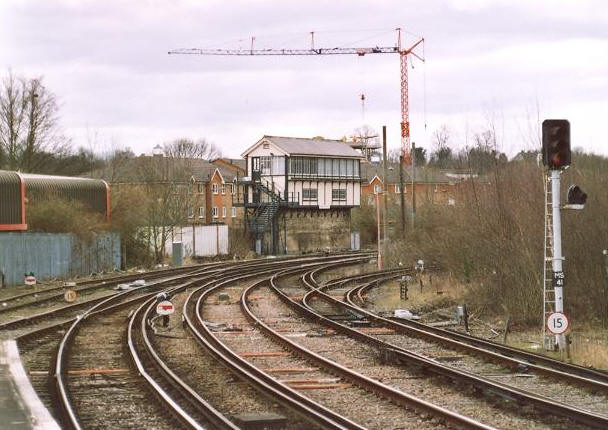 The signal box of about 1900 origin is prominent in this southward view from 22nd March 2006,

which shows two ''down'' side sidings still in existence on the left (but without third rail), and an

electrified spur branching off from the ''up'' side, heading towards the site of the former engine shed. 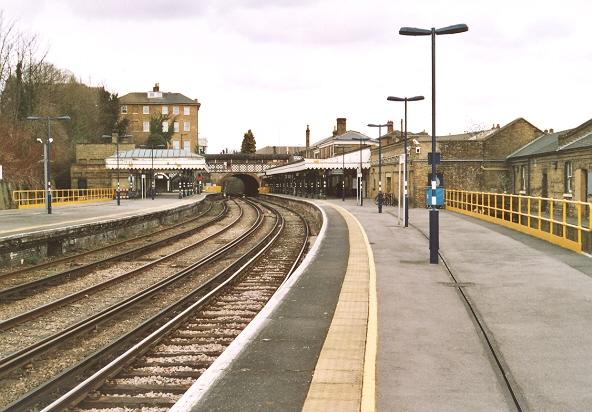 in 1856. This is a northward view towards that location which shows all four platform faces.

The outermost platform faces are still served by a track, but are not used by passenger services,

nor are electrified. Behind the year 2005-erected railings on the right is an old wagon, which

has been sitting there for a number of years, full of broken concrete. This view is from 22nd