In 1987, British Rail had selected Waterloo as the preferred location for a terminal to accommodate Channel Tunnel passenger services. On 23rd January of that year, an exhibition was held at the site, the country's largest terminus station, which showcased the plans for the new terminal, including the structure's design.

In a House of Commons debate on 16th February 1987, it was stated that British Rail had already considered and rejected eleven other possible sites before settling on Waterloo. These were the following:

Olympia, Victoria, and Waterloo became close contenders, for each site would be able to accommodate platforms 400-metres-long (the approximate length of the proposed train formations for international services), of which four or five would be required. The latter two locations could also house a 500 square metre international passenger terminal, something Olympia could not. Waterloo eventually came out on top, given that it had more capacity on its approaches for additional train movements, and British Rail considered the immediate transports links for onward travel to be better than those at Victoria. Waterloo, as the site of the international passenger terminal, was enshrined in the Channel Tunnel Act, which received Royal Assent on 23rd July 1987.

As mentioned elsewhere on the website, the long-term goal was to have an underground terminal area for international services at Kings Cross, reached by a dedicated high-speed line entering London from the south east. Naturally, this would have a prolonged construction period, and it was forecast that the new route would not be fully ready until ten years after the opening of the Channel Tunnel. Until that time, international trains would have to use existing rail corridors between the capital and Chunnel portal. As far as freight traffic was concerned, British Rail looked towards sending such trains over under-used routes, these being identified as the Redhill to Tonbridge and Maidstone East lines. The preferred route for passenger trains was the ex-SER main line via Tonbridge and Ashford which, between these locations, ran as straight as a die. However, during the morning and evening peaks, there was not enough capacity to accommodate both Eurostar and Network SouthEast services between Orpington and Tonbridge; as a result, international trains were to be routed via Swanley and Maidstone East during these times.

To get passenger trains from the proposed international terminal to the alternate routes via Tonbridge and Maidstone East, a double-track connection between the Waterloo approaches and the "Chatham" exit from Victoria was sought. The "Chatham" main line was to be used by the majority of international trains as far as Bickley Junction; thence, these services would embark on upgraded loops through to Petts Wood Junction, and on to Tonbridge via Orpington and Sevenoaks. The Eurostar services running in the peak hours would continue on the ''Chatham'' main line as far as Swanley Junction, where the Bat & Ball branch would be taken. The international trains could either continue onto Ashford via Maidstone East at Otford Junction or, in limited cases, rejoin the primary route at Sevenoaks (Tubs Hill) by using the Bat & Ball connecting spur.

Construction of the international terminal at Waterloo formally got underway on 11th December 1990. The plan involved creating a five-platform affair dedicated to Chunnel passenger services, situated upon that part of the terminus formerly used by "Windsor Line" trains. 3.40-KM (2.11-miles) from the buffer stops, construction also began on the double-track connection with the "Chatham" main line; this link later became known as the "Nine Elms Flyover". At this point on the South Western Division, where the Waterloo main line passed under the Victoria approaches, there were seven parallel-running tracks. Previously, there had been ten lines running side-by-side here, but subsequent degrading left a triple track bed vacant on the northern side of the viaduct. It was this disused area which was earmarked for the double-track incline of the connecting spur. This was in addition to a third track, laid on the northern-most side of the main line, which would virtually become dedicated to international empty stock movements.

Across six of the seven Waterloo running lines, 115-metres (126-yards) north east of the "Chatham" line viaduct, a huge concrete box, measuring about 110-metres (120.3-yards) in length by 28-metres (30.62-yards) in width, was erected. This essentially put this part of the main line in a tunnel and allowed the two "international" tracks to cross over above, during their ascent to "Chatham" metals. Either side of the box, the flyover was supported on a series of concrete piers and in total, an elevated track bed of about 750-metres (820-yards) in length between the two routes was formed.

Nine Elms Flyover was deemed complete in May 1993, being formally commissioned on 2nd of that month. At its southern end, the link from Waterloo connected with "Chatham" metals at Linford Street Junction, little over 500-metres (546.8-yards) north of Wandsworth Road; the point of convergence with the South Western Main Line was named "Nine Elms Junction". However, scheduled international passenger services, by that time christened "Eurostar", did not commence until 14th November 1994, marking the start of what became thirteen years' use of the flyover.

As mentioned in the Ebbsfleet and Stratford International sections of the website, the original high speed line to Kings Cross via South East London was abandoned in 1991. An easterly entry to the capital was subsequently chosen, St Pancras selected to be the international terminal, and the scheme morphed into what became Sections 1 and 2 of the Channel Tunnel Rail Link, collectively known today as "High Speed 1". To quickly recap, for fear of going over old ground, Section 1 of the CTRL, between Southfleet and Cheriton, came into use to regular traffic on 28th September 2003. This included a 5.85-KM (3.63-mile) double-track spur between the former and the "Chatham" main line at Fawkham Junction (near Longfield). The spur was an interim measure, for use by trains whilst Section 2 of the CTRL, between St Pancras and Southfleet, was built. This resulted in the trains coming off the Nine Elms Flyover at Linford Street Junction staying on the "Chatham" main line until Fawkham Junction, 34-KM (21-miles) distant, was reached. As a result, the routes via Tonbridge and Maidstone East were no longer part of the regular passenger schedule.

The original intention had been to maintain both St Pancras and Waterloo as Eurostar hubs after completion of Section 2 of the CTRL, the latter station catering for approximately a third of such services. However, in November 2004, London & Continental Railways (Eurostar's holding company) confirmed that Waterloo International would close permanently in 2007, when St Pancras came into use. The cost of maintaining two London terminals could not be justified and on 13th November 2007, Waterloo closed to international services for good, St Pancras taking over the following day. The question remained of what to do with the redundant terminal and, what’s more, the disused Nine Elms Flyover.

The presence of the connection between "Chatham" and South Western Main Lines at Nine Elms brought forward the possibility of some Victoria services being diverted into Waterloo. This was quickly ruled out, for Nine Elms Flyover was reviewed as not having enough capacity for train movements to make any serious commuter service over it worthwhile. Consequently, the only option left was demolition, which would at least vacate space for an additional track for the Windsor route on this section of the line.

Much political wrangling over what to do with the former Waterloo International terminal finally settled on converting it for use by domestic trains. Work over a prolonged period has been undertaken to make the terminal suitable for such services, which has included knocking a hole in the wall between domestic platform 19 and former international platform 20, abolishing the "low level" concourse, and installation of ticket barriers. The option of heightening the platforms, which had been built to a lower European profile, has not been pursued. At time of typing, platform Nos. 20, 21, and 22 have so far been brought into irregular use for commuter services, and the Nine Elms Flyover still stands. 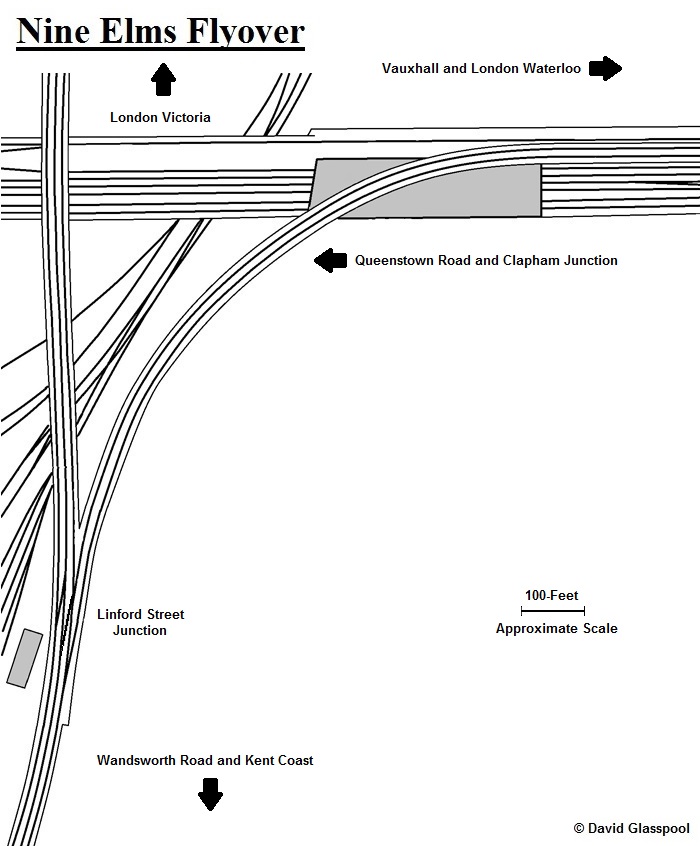 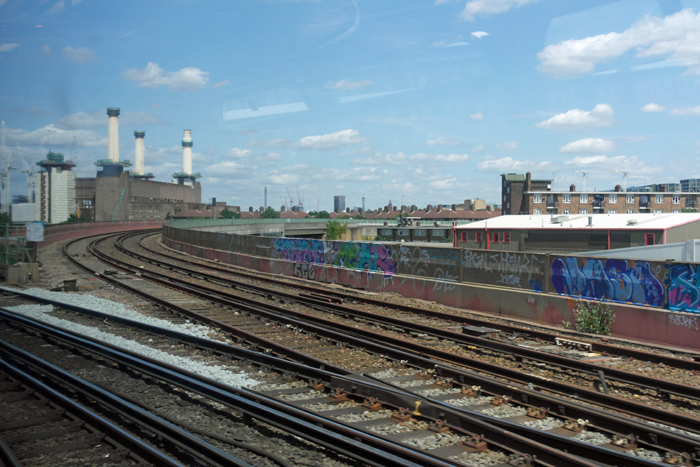 Viewed from the ''Chatham'' approaches to Victoria, at Linford Street Junction, the double-track is seen curving away across the concrete flyover. The chimneys of Battersea Power Station were undergoing restoration as part of a scheme which aimed to redevelop the entire site into a huge mixed residential/retail complex. © David Glasspool 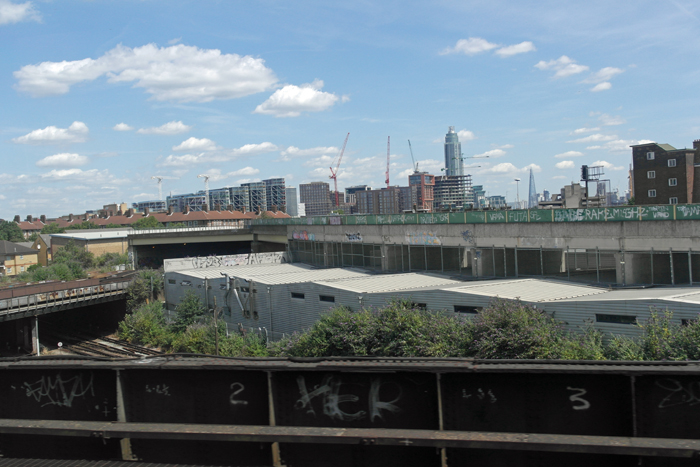 The Stewarts Lane area retains a maze of lines at varying heights. Viewed again from Victoria's ''Chatham'' approaches, the huge rectangular tunnel, of concrete and steel girder construction, is seen carrying the double-track ''international'' tracks over the Waterloo running lines. Running underneath the latter, at the bottom left, are those lines which link Stewarts Lane carriage sheds with Victoria, in addition to providing an alternate ''low-level'' route to the terminus from both South London and ''Chatham'' Lines. © David Glasspool