This Pullman carriage is now far from its Kentish haunts, where it was once part of the famous ‘’Golden Arrow’’. Indeed, it has now been preserved and based in Devon for considerably longer than the duration of its prestigious British Railways career. Whilst ‘’Orion’’ was a post-1948 vehicle, its origins in fact date back to 1938, when it was part of a production run of seven Pullman cars ordered from the Pullman Car Co. by the LNER. Construction of these vehicles was subcontracted to the ‘’Birmingham Railway Carriage & Wagon Company’’ (BRC&WC), which ordered the necessary materials, only for the building task to be put on hold on the declaration of war in September 1939. The LNER would never see these Pullmans run on its metals, but the order of seven vehicles did not disappear. After nationalisation, the BRC&WC eventually set to work on building these carriages, completion of all seven coming in 1951.

This had been a busy time for the Pullman Car Co. and its contractors. Numerous carriages had been badly damaged or completely destroyed as a result of enemy action, and a large-scale repair operation was begun. The 1951 Pullman cars met a requirement to produce a new luxurious train, for which would only be required on a temporary basis. Indeed, this was the ‘’Festival of Britain Golden Arrow’’, an all-Pullman train laid on specially to convey Royalty and Civil Dignitaries between London and the coast during the celebratory period. This exclusive train had its first run from Victoria on 11th June 1951, and after the close of the festival, the carriages were absorbed into the standard ‘’Golden Arrow’’ formation. ‘’Orion’’ was a regular fixture in this train and spent its entire career on the South Eastern Division. The carriage is notable for being used by Her Majesty Queen Elizabeth II on 14th October 1956, during a visit to the Medway Towns; the Queen and her party alighted at Gillingham. Although now Southern Region carriages, the memory of the LNER had not been wholly lost, and the seven Pullman cars mentioned above were all equipped with Gresley-designed four-wheel bogies. In comparison to pre-war cars, the 1951 Pullmans featured square lavatory windows with rounded corners, rather than those of an oval shape. Some of those 1951 carriages which have survived into preservation have since been retro-fitted with the earlier oval lavatory windows. This refers specifically to the cars operated as part of the VSOE British Pullman fleet, where pre-war vehicles with oval windows are more numerous.

In 1969, all remaining Pullman vehicles on SR metals were overhauled. This saw a repaint from the familiar ‘’New Standard’’ Umber and Crème livery into British Rail’s Corporate Blue and Grey scheme. The work simply involved applying the new colours directly over the existing Pullman livery, without completely stripping the old paint scheme off. At this time, the remaining Pullman vehicles in both ‘’Golden Arrow’’ and ‘’Brighton Belle’’ formations lost their names, and thereafter they were designated by their original schedule number – thus, Orion became No. S306S. Previously, in 1968, Pullman cars ‘’Leona’’ and ‘’Cygnus’’ had been out-shopped in BR’s ‘’Reverse’’ Blue and Grey scheme. This was a peculiar livery which appeared just as the name suggests: the upper portions of these vehicles were painted blue, and the lower stripe was grey in colour. The livery was replaced by the conventional Blue/Grey arrangement during the 1969 overhauls.

Since 1954, the ‘’Golden Arrow’’ had ceased to be all-Pullman, when BR Mk 1 vehicles crept into the formation. The Mk 1 carriages were used to provide accommodation for those passengers intending to use the service, but who could not be fitted into the Pullman rake due to a lack of seats. A standard class Mk 1 was often marshalled into the formation to take those passengers who had missed the earlier non-stop boat train (albeit non-Pullman) to the coast. The number of Pullman cars in the ‘’Golden Arrow’’ was gradually whittled down, so much that by the train’s last day of service, on 30th September 1972, there were just four of these carriages. The rest of the formation consisted of six Second Class BR Mk 1 vehicles and a General Utility Van (GUV). ‘’Orion’’, now No. S306S, ran in the final service and, with its sister vehicles in ‘’Arrow’’ and ‘’Belle’’ fleets, was stored out of use at Brighton after withdrawal. No. S306S was initially dispatched to the site of Ashford engine shed in 1972, where it became an exhibit of the ‘’South Eastern Steam Centre’’. It was latterly purchased by ‘’Peco’’, a company renowned for its model railway products, in 1977. By this time, the carriage was still displaying the BR Corporate livery it had worn since repainting in 1969.

No. S306S was subsequently moved from Ashford to Wolverton Works, Buckinghamshire, by rail, for complete restoration. This involved stripping the existing paintwork and re-applying the ‘’New Standard’’ umber and crème Pullman colours. The vehicle’s identify changed from No. S306S back to ‘’Orion’’, and it had been proposed to use the vehicle as a static restaurant at the ‘’Beer Modelrama’’ complex (later renamed ‘’Pecorama’’) near Seaton, Devon. A restoration of the interior was tailor-made to this new use: a completely new modern kitchen was installed, but the quintessential features of a Pullman car, including polished woodwork, brass, and separate armchairs, were retained. Overhaul of the carriage was completed in January 1978; now came the task of moving it from Buckinghamshire to Devon. The vehicle was fit to travel by rail, but the ‘’Modelrama’’ site completely lacked rail access. As the crow flies, Beer was 4¾-miles from the nearest railway line, the ex-LSWR route from Salisbury, and 19-miles from Exeter, where facilities were available to lift the carriage from rail to road transport. Complications with performing the rail-road transfer at the Exeter end of the journey prompted the decision to convey ‘’Orion’’ entirely by road. A direct route made this distance a little over 200 miles, but it was decided to take a more circuitous course via Exeter, to use the full extent of the M5 Motorway. The bogies were removed so that the vehicle’s body could be mounted upon a pair of road wheel sets, one at each end, allowing the load to be steered both at the front and rear. The journey began on 30th January 1978 and the vehicle arrived at its destination the following day, being craned back onto its bogies. It was subsequently lifted onto a short section of standard gauge track, alongside a mock station. It has been in Devon ever since, 140 miles from the London terminus in used to frequent. 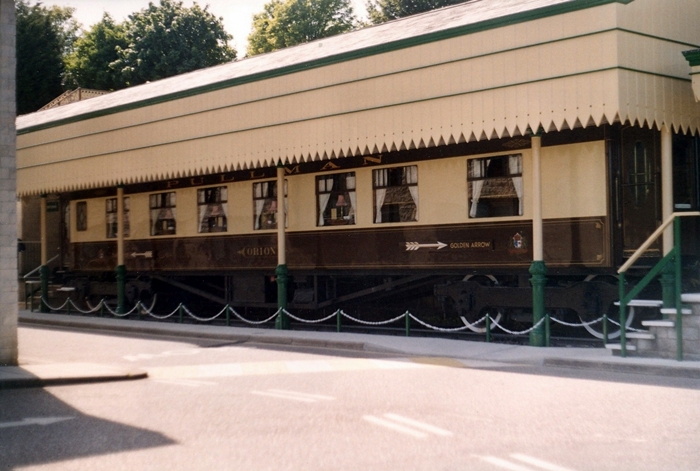 ''Orion'' can be found on the forecourt entrance to ''Pecorama'', underneath a canopy which had been completed

within two years of this photograph. Whilst the vehicle appeared resplendent in full ''Golden Arrow'' regalia, the

opposite side of the carriage, against the wall, remained wholly unpainted. David Glasspool


Return to the Kent Rail Homepage or alternatively, check for Updates.