The present station is a fairly late addition to the original Bat & Ball route, this of which had opened on 2nd June 1862 as a single-track branch. Doubled in 1863, an eastward extension to Maidstone was conceived in 1874, the first trains running to the county town on 1st June of that month. The line spurred off at what became ‘’Otford Junction’’, about ½ mile to the south of its namesake, and from the outset a station was provided right at the point of divergence. The intermediate stop took its name from the locality and comprised of three platform faces, two of which formed an island on the eastern side if the running lines. Both platform surfaces were protected by copious canopies, somewhat generous for a station which was merely an interchange point; the only way the platforms could be accessed was by train. Services could begin from here and those trains from Swanley could diverge off the original course to Sevenoaks. However, it was a more common practice for branch services to carry on to Sevenoaks, and then reverse back to Otford Junction, subsequently continuing on to Maidstone thereafter. Doubling of the Maidstone branch began in 1881, and for this it was decided to provide a completely new station ½ mile to the north of the junction, nearer the main populous – these platforms would also be available for use by residents, not just restricted to those disembarking for service interchange.

Full double-track working had commenced on the Maidstone line on 1st July 1882, but the new Otford Junction station (the suffix was kept, despite the relocation of the platforms) was not ready until exactly a month later. Previously, in 1879, the ‘’Sevenoaks, Maidstone & Tunbridge Railway’’ (which had been renamed from the ‘’Sevenoaks Railway’’ in 1862) had been vested in the LC&DR, which allowed the latter’s design traits to seep through in the second Otford station. The main building, located on the ‘’up’’ side, was basically an enlarged version of the typical structures found at LC&DR intermediate stations. In fact, if the façade of Otford is compared with the first picture in the Shepherds Well section, the similarities between the two structures become obvious. The company did, however, abstain from employing its usual crème brickwork with ‘’whitewash’’ surface finish, and instead red brick was used throughout its construction, conforming and harmonious with many of the existing stations along the Sevenoaks and Maidstone routes. Although LC&DR intermediate station architecture was fairly basic, the red brick used at Otford, combined with the stylish canopies which later appeared, gave the building an air of elegance. Eventually, three platform faces were in use here: two served the through lines, whilst the ‘’up’’ side was also host to a southward-facing bay. This was used by the shuttle service to Sevenoaks; by this time the latter stretch of the original branch to Bat & Ball had become an unimportant appendix of the Maidstone line. Since 1868, the SER had adequately served Sevenoaks by the much more conveniently located Tubs Hill station. Returning to the topic of Otford, it seems likely that the ‘’down’’ side would have been host to a timber waiting shelter and the main building provided with a platform canopy very similar in size and style to those decidedly small examples found at the likes of Sole Street and Farningham Road. Finally, Saxby & Farmer built the station’s signal box on the ‘’up’’ side, some distance south of the platforms, immediately beyond the goods yard (of which has yet to be detailed). This company’s architecture seemed to prevail in most cabins west of Maidstone.

Goods facilities here featured to the south of the main building and were indeed modest, consisting of two sidings, one of which penetrated a single-track goods shed. The latter was of the same basic design which had appeared at Eynsford some twenty years earlier, and like its earlier counterpart, boasted a quintessential canopy with intricate valance on its eastern elevation (a simplified version is still in existence at Shoreham). Interestingly, the spur for the goods shed also directly fed the Sevenoaks shuttle bay line.

Throughout the 1890s the Board of Trade began tightening standards, which resulted in many stations acquiring footbridges in place of the hitherto standard track foot crossings. Finance was also available to provide such features and indeed, it was in about 1894 that Otford received such a structure. Luxurious it was, for it was of the now classic lattice design, but more importantly, featured an arched roof (virtually identical to that still in existence at Gravesend Central). It was also decided at this time to generally modernise the station, which included the erection of copious and intricately designed flat-roofed canopies. Again, virtually identical examples still grace the platforms of Faversham, the station of which was rebuilt in 1897, indicating that this design of canopy was a company standard at the time. The footbridge was supported across the centre of the canopies, and underneath the coverage on the ‘’down’’ side, a small brick-built waiting room was provided. Canopy improvements were undertaken in conjunction with the lengthening of both platforms at their southern ends using brick. The platform extensions created the Sevenoaks bay platform face which has already been mentioned in the first paragraph.

6th January 1935 marked the commencement of electric services along the line, the third rail having been extended from Bickley through to Sevenoaks Tubs Hill. It was good news for the ‘’forgotten’’ Bat & Ball appendix; services on the branch to Sevenoaks saw a renaissance on the advent of electric traction. Hitherto, this section of line had been served by an infrequent shuttle service from the bay platform at Otford, but roles were about to be reversed. Since the Maidstone line was still steam-worked at the time, these services were downgraded to using the bay platform. Thus at Otford, passengers now had to change train for a Maidstone service, rather than one to Sevenoaks, the electrics to the latter being given priority on the through lines. This scenario lasted a brief four years, after which the Southern Railway completed its suburban electrification scheme to Gillingham and both Maidstone stations, electric services commencing on 2nd July 1939. The ‘’Junction’’ suffix had been dropped from the station name boards some ten years earlier. Electrification left the bay line redundant and subsequently, it became an extension of the goods yard.

Although it could possibly be considered that the station’s decline began when the bay line went out of regular passenger use, the closure of the goods yard is more convincing as the first major cutback. This occurred in May 1962, the month before the full electric timetable through to Ashford commenced. The closure of the signal box followed in February 1970, when the nearby cabin at Otford Junction assumed its responsibilities, semaphores also disappearing at this time. More changes were on the cards during the 1970s: these included the removal of the original footbridge, installation of a soulless replacement to the north of the main building, and the flattening of the goods yard site to provide additional car parking space. In about 1986, there was a general rationalisation of platform structures: the ‘’down’’ canopy was totally removed and that on the ‘’up’’ side severely truncated, it now just stretching the width of the station building. A plain section of valance was attached to the end of the reduced length, and a single bus shelter replaced the former copious canopy on the ‘’down’’ side. A bus shelter had also appeared on the ''up'' side to compensate (somewhat poorly) for the loss of canopy coverage. It was claimed that the canopies had become unsafe due to damage from water freezing inside the cast iron columns – no doubt this was a convenient excuse for demolition and reduction in maintenance costs, as there appeared little wrong with them at the time of removal. The degrading saw a section of Otford's ''up'' canopy reused at nearby Shoreham. It was also at this time that much of the main building had been leased out to private businesses. In connection with this, the structure became roughly symmetrical when the northern ⅓ of it, which had been single-storey from the outset, received a second floor. The latter was constructed in sympathy with the rest of the building.

With thanks to David Morgan for information regarding canopy destruction. 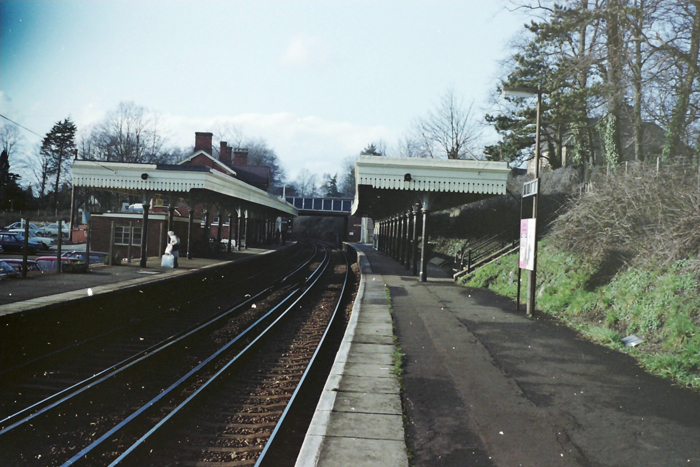 A northward view from the "down" platform shows the splendid canopies still in evidence, but the roofed footbridge having been replaced by a simple concrete type. Steps linking the "down" platform to a high-level footpath can be seen on the right. © Kevin McArdell 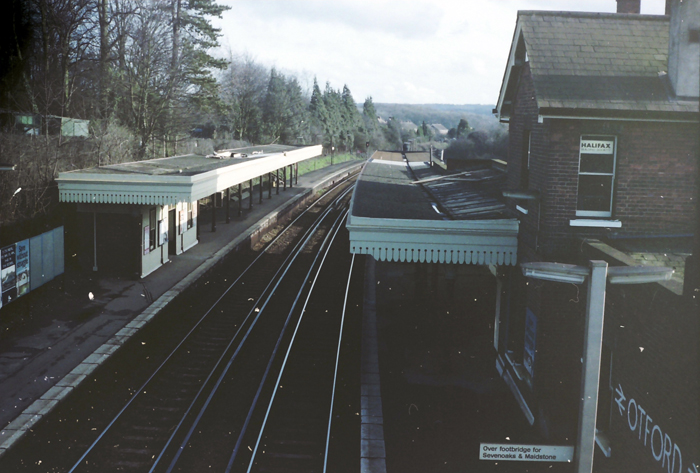 A southward view from the then recent footbridge shows that the "down" platform still retained a waiting room, complete with sash-style windows. However, the canopy had developed a gaping hole mid-way down. © Kevin McArdell 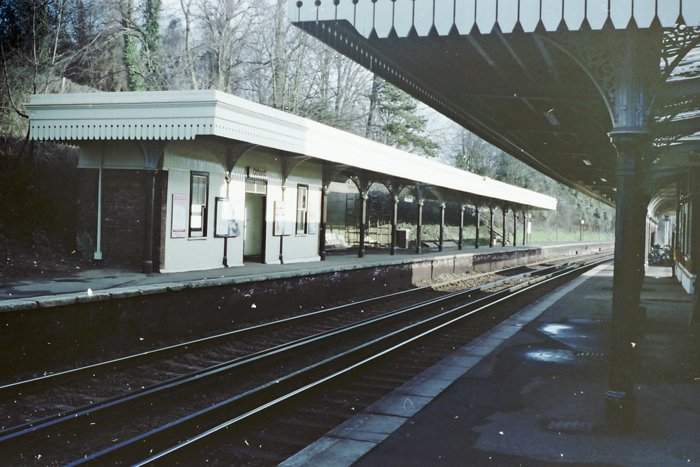 At platform level, a closer inspection of the splendid platform canopies and timber-panelled "down" side waiting room are afforded. Note the intricacy of the cast-iron canopy brackets. © Kevin McArdell