A week-long visit to Cairns, Australia, in March 2014 produced some pleasant surprises on the railway front. Prior to my visit, I had been made aware of the "Kuranda Scenic Railway", a 1067 mm-gauge (3-foot 6-inches) 34-km-long (21.13-miles) tourist line which takes passengers up into the Cairns Tablelands. In short, the line had originally been constructed between 1886 and 1891 as part of a route linking Cairns with Herberton, the latter being a tin mining town 64-kilometers (around 40-miles) to the south west as the crow flies. Naturally, the scenic railway went on my "to do" list, but on arrival in Cairns, a great deal more railway interest came to light.

During my stay I was based in Redlynch, a northern suburb of Cairns located 9-kilometers (5.6-miles) from the city centre, immediately before the railway begins its climb into the hills. It was here, when visiting the locality's famous "Red Beret" watering hole one evening, that I noticed a vintage timber building beside the single-track line. Emblazoned on the road-facing side of the structure was the name "Redlynch" and this, combined with a level crossing and a traditional lower quadrant semaphore signal, indicated I had come across the area's railway station by happy accident. As a result, I returned later in the week to explore the remnants of this historic site.

I found Redlynch station to comprise one platform, upon which the aforementioned single-storey main building, about 50-feet by 23-feet and of tongue and groove construction, resided. The wooden structure comprises a gabled pitched roof, clad with corrugated iron, which extends over the platform to form a canopy (hence giving the building a somewhat lopsided appearance). Contemporary photographs testify that this was a partial rebuild of an earlier design; the station originally had a roof with a semi-circular, rather than triangular, cross section. The roof rebuilding probably included the addition of the small hut which can still be seen next to the building's Cairns-facing elevation.

By the time Redlynch is reached from Cairns, the line is carried upon a shallow embankment, which explains why the station building is supported upon a series of stilts to bring it up to rail level. The line from Cairns is single track and, unlike in Britain, makes its way through the suburbs absent of any lineside fencing, save for specific walkways marked out at some level crossings. Construction of the Cairns to Redlynch section of the line was subcontracted to Messrs PC Smith & Co. on 1st April 1886. As early as November of the same year, the contract was taken over by McBride & Co, this firm itself being usurped by the government as early as July 1887.

The track layout at Redlynch comprises a simple passing loop formation, allowing trains to cross each other at the station. However, the 2014 visit showed the passing loop to be heavily overgrown and, worse still, the timber station building to be fenced off from the platform. Further digging found that the station formally closed in 2011 and in the same year, owner "Queensland Rail" offered the building for lease. Thankfully, the structure is protected by a Heritage Listing, although it was clear that a firm had yet to occupy the building.

The line was originally opened in stages, the first section being Cairns to Redlynch, this being commissioned to traffic on 8th October 1887. Construction of the railway beyond the latter had only begun in April of the same year, so Redlynch acted as terminus for over a decade. An extension to Kamerunga, 5-miles (8-km) distant on the ascent through the highlands and once the location of a large construction camp, did not open to traffic until 20th October 1888. Kuranda, which today forms the northern terminus of the scenic railway journey, was reached by trains on 25th June 1891.

The line was signalled by contractors McKenzie & Holland, a company based in Worcester, UK, which was already well known for producing high quality signalling equipment for British and overseas markets. The company later established a works in Australia to supply components to the fledgling railways on that huge continent. At the south western end of the Redlynch station site, relics of bygone signalling practices are in evidence. These include the earlier mentioned lower quadrant "home" signal, positioned alongside the level crossing, in addition to a ground frame. The latter can be found upon the platform, south west of the station building, and comprises three levers: two of these are out of use and painted white (termed ''spare''), whilst the third is red in colour and controls the position of the semaphore signal arm. The points at this layout are controlled from immediately adjacent levers. Although the passing loop seems to be returning to nature, the signal post appears to have been recently renewed, suggesting this set up is still very much operational.

In spite of a passing loop formation, vintage photographs indicate that just one platform was ever provided at Redlynch for passenger use. Today, there is also evidence of another, much shorter elevated surface on the opposite side of the tracks to the main platform. This would have been used for freight services; indeed, a small number of sidings for this type of traffic were once laid beside the passing loop, although these are no longer evident today.

1½-km (0.93 miles) from Redlynch, in the Cairns direction, the line comes to Freshwater station, which is located in the suburb of the same name. This was purpose-built for the Kuranda Scenic Railway operation in the style of a log cabin, and opened in 1984. Perhaps this will be covered in a later article, but a point of interest here is that Freshwater station is equipped with a colour aspect light, rather than mechanical signalling, given its comparatively recent construction. Go 4½-km further in the Cairns direction and the semaphore signal tradition is restored by the presence of a single "home" post alongside a level crossing in the suburb of Aeroglen.

Immediately north east of Redlynch station, on the merging of the passing loop back to single-track, the line passes over a shallow bridge. In addition to a public footpath, under this bridge also passes another narrow gauge line, of smaller width to that above it, being of only 610 mm (2-foot) gauge. This single track is part of a maze of lines which serve the sugar cane fields of Cairns and the surrounding area. My visit took place out of season, but come June and July, humble diesel shunters can be seen hard at work pulling rakes of wagons loaded with cane. These tracks crisscross local roads and highways multiple times, being indicated by US-style level crossing warning signs, before disappearing mysteriously into the vegetation.

The sugar cane railway network of Cairns is a separate study topic, far beyond the scope of this piece. Miles (or, if you are Australian, kilometres) of track snakes its way through fields, across roads and rivers, converging at a common hub for the cane to be processed. There are two large mills on which this series of lines come together. The network of tracks traversing the Cairns suburbs, such as those through Redlynch, all merge at a large complex in Gordonvale, 20-kilometres (12½-miles) south of the city. A second set of lines, serving those cane fields to the north, nearing the town of Port Douglas, feed into a bustling mill in Mossman. 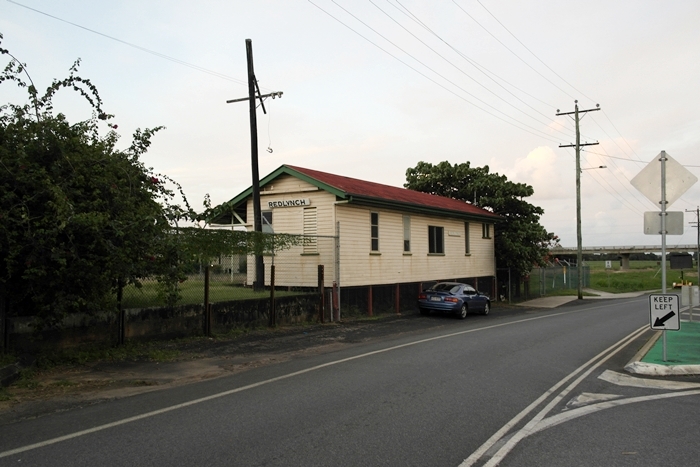 This northward view shows the quaint tongue-and-groove timber station building still sporting the ''Redlynch'' nameboard, although it is no longer open to passengers. Note the stilts, as mentioned in the main text, which bring the structure up to rail level. © David Glasspool 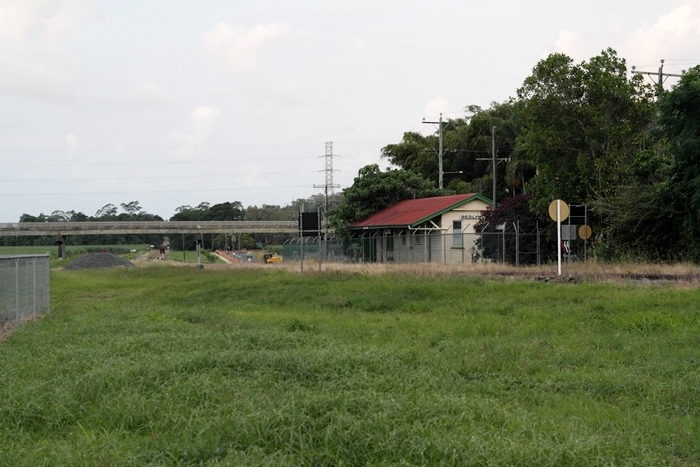 A Cairns-bound view shows the single-track line descending towards the ''Cairns Western Arterial Road''. To emphasise it is no longer in use, the station building has been surrounded by somewhat draconian fencing. © David Glasspool 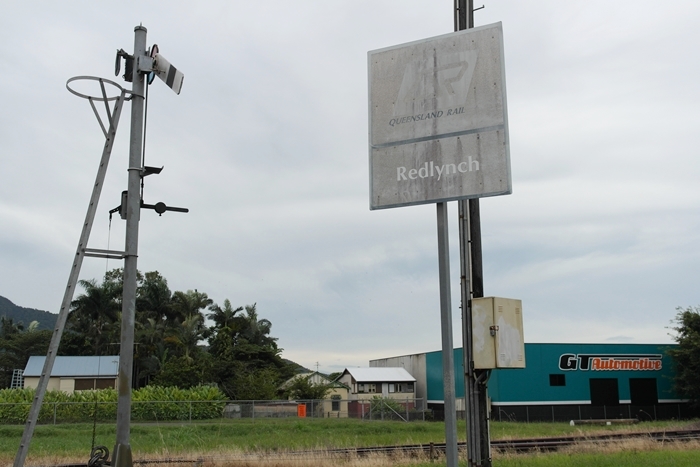 A faded Queensland Rail sign stands alongside a still operational semaphore signal at Redlynch. The passing loop can be seen merging into single track in the background. © David Glasspool