Today, there is virtually no trace of this site, its remains having been obliterated in 1968, over a century after it was originally commissioned. Rochester Bridge joins Rochester Common and Chatham Central on a list of stations which have completely disappeared from Medway, the former having seen its last passengers nearly 100 years ago.

The East Kent Railway (EKR) reached Strood on 29th March 1858, after an extension of its Faversham to Chatham route across the Medway to connect with the metals of the South Eastern Railway's (SER) North Kent Line. Ideally, the EKR wanted to run over the North Kent Line to gain access to the capital, but the SER blocked this on the grounds that the route was already running at full capacity. The EKR was, however, granted rights to use the North Kent Line Strood station, where their trains had as much priority as those of the SER. The SER agreed to convey EKR passengers thence on its own trains, but the latter was already seeking independent access to London.

On 3rd December 1860, the London, Chatham & Dover Railway (renamed from the EKR on 1st August 1859) commenced operation to Victoria via Bromley. On this day, the company opened its own Strood station 90-yards north of the bridge crossing the Medway, about 270-yards from the SER's site as the crow flies. At this point, the line was carried upon a viaduct, around which two partially staggered platforms of timber construction were erected. The main station building was located on the London-bound platform, and early large scale maps show this to incorporate Booking, Parcels, and Station Master's Offices. It was a masonry building, rising above viaduct level to back onto the platform, and comprised a hipped slated roof. It was essentially built to the same design as those main structures which were erected at Wandsworth Road and Canterbury (East), the latter of which survives today.

This station has a complicated naming history, alterations having been made no less than four times during its existence:

South of the station existed the junction between the LC&DR main line and the connecting spur with the North Kent Line. Since the opening of the through route to Victoria via Bromley in 1860, traffic over this spur, about 16 chains in length, died. This meant that North Kent Line passengers had no railway service to the towns south of the Medway and vice-versa for residents from Rochester eastwards. Thus, passengers had to walk between the Strood stations of the SER and LC&DR, until the Railway Commissioners decreed that a service had to be run over the connecting spur. This began on 1st April 1877, the instigator having been the then Mayor of Rochester, Mr N. E. Toomer. As a result, the connecting spur was dubbed the "Toomer Loop".

In 1908, rebuilding of the station at Rochester Bridge took place. This included demolition of the original structures on either platform and the erection of a grand main building on the "up" side. This was an imposing red brick affair, comprising two floors and of symmetrical appearance, frescoed at its edges with stone. A hipped slated roof was in evidence, intercepted midway by a separate perpendicular pitched section, and the building's facade displayed "SE&CR 1908". The platforms remained planked with timber, but new canopies came into use on both. Of the latter, that on the "up" side, attached to the then new main building, was of V-shaped cross section, decorated with the clover-patterned valance originally pioneered by the SER - indeed, the same canopy design came into use at the SER's Strood station post-1899. The "down" platform at Rochester Bridge received a canopy with the same patterned valance, although was an upward-sloping, rather than V-shaped design.

As mentioned in the Strood section, the SER opened in two stages a short, but very expensive branch line through to a terminus laughably named "Chatham Central". The first part to "Rochester Common" opened on 20th July 1891, followed by the remaining stretch to Chatham Central on 1st March 1892. This terminus was in fact in Rochester and, after the formation of the SE&CR Joint Managing Committee in 1899, the line became an early candidate for closure, ceasing operation from 1st October 1911. However, all was not lost for the infrastructure erected by the SER, and it was decided to adopt this company's double-track lattice girder bridge over the Medway for the "Chatham" main line, that structure erected by the EKR in 1858 becoming obsolete. South of Rochester Bridge station, the "Chatham" line was slewed to bring it in alignment with the SER bridge. The original connecting spur from 1858, later dubbed the "Toomer Loop", was also no longer used thereafter; it was replaced by an inclined spur between the two routes which carried the Chatham Central branch.

The rebuilt Rochester Bridge station did not even last a decade in service. It was closed from 1st January 1917 as an economy measure during World War I and never reopened to traffic. A fire on the SER bridge across the Medway in 1919 saw the original LC&DR span come into use again for rail traffic, in addition to the revival of the "Toomer Loop" between the two routes, until repairs were completed in January 1922. After this time, the track through the still extant remains of Rochester Bridge station was lifted. The "Chatham" main line now followed an alignment upon a new embankment partially formed on the old site of the "Toomer Loop", sandwiched in-between the Rochester Bridge station viaduct and the connecting loop with the North Kent Line. At the southern end of the "down" platform remained a timber signal box, which controlled the junction between converging "Chatham" and North Kent Lines. This opened in about 1898 within what was then the fork between the main line and Toomer Loop, replacing an earlier signal box which straddled the tracks between the Medway Bridge and the junction. Known as "Rochester Bridge Junction", this cabin itself was closed on 29th January 1939, when control passed to an Odeon-style cabin erected by the Southern Railway at Strood Junction.

From 1922, when the SER's bridge came back into use for rail traffic, there existed a disused track bed of about 690-yard-length, which encompassed the viaduct upon which the closed Rochester Bridge station was situated, the EKR Medway Bridge of 1858, and another stretch of redundant viaduct on the southern side of the river. Indeed, a very substantial section of infrastructure which remained in this state for another 46 years, sandwiched in-between the A2 road and the original alignment of the SER's "Chatham Central" branch (the latter of which now carried the "Chatham" main line). Substantial growth of road traffic through the Medway Towns during the 1950s and into the 1960s made the Medway crossing a bottleneck, which gave rise to a couple of relief schemes. The first of these was the opening of the Medway Viaduct 1½ miles upstream, in 1964, which allowed road traffic to bypass Strood, Rochester, and Chatham, ultimately providing a faster route to Dover. The second was the replacement of the 1858 EKR Medway Bridge with one carrying a road, providing a further three lanes for traffic between Strood and Rochester. Work on the latter commenced in 1968, which involved dismantling the original bridge framework, but retention of the abutments to carry the new deck. Sadly, the 1968 scheme also involved the demolition of Rochester Bridge station, which partly occupied the site earmarked for the approaches to the new road bridge. The latter was commissioned in April 1970. 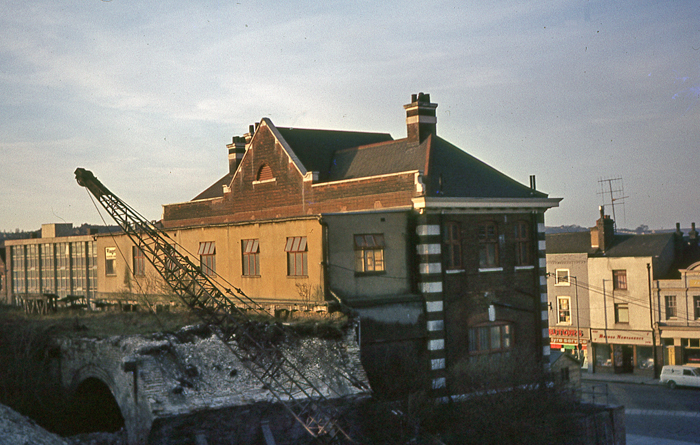 A sad sight indeed: the demolition of Rochester Bridge station. The substantial red brick main building of 1908 is in view, showing its stone-lined edges and hipped roof arrangement. The single-storey concrete structure was added long after closure, in about the 1940s, and sits upon the former "up" platform. To the bottom left, destruction of the viaduct is in full swing and today, not a brick remains. © David Glasspool Collection 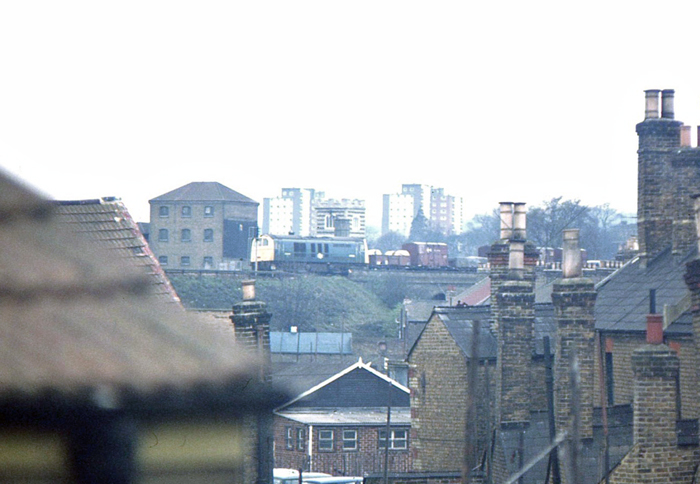 Taken from the photographer's back window, an E5000 series (later Class 71) electric locomotive is seen fronting an assorted freight of vans and open wagons. The train is at milepost 32¾ from Victoria, on the northern approaches to the Medway railway bridge and the former Rochester Bridge station. The viaduct of Rochester Bridge station at one time diverged from today's "Chatham" route 250-yards beyond the front of the locomotive, but had been demolished two years prior to this photograph. © Roger Goodrum