A House of Commons Select Committee confirmed on 20th July 1995 that freight loops were to be installed along the Channel Tunnel Rail Link at Singlewell and Charing Heath. Furthermore, a direct connection with the Freight Inspection Yard at Dollands Moor was also a requirement of the project, to emphasise the fact that the CTRL was capable of handling freight trains in addition to high-speed passenger services. The presence of Dollands Moor prevented the CTRL from having a near dead-straight entry to the Chunnel portal approach lines, but the solution devised was nevertheless interesting. A track bed split at Sandling would see the double-track CTRL diverge into a pair of single lines. Each single track would be slewed to allow the yard to be sandwiched in-between them. Immediately after the point of divergence, a third track would emerge in a central position, which would have direct connections to both ''up'' and ''down'' CTRL lines: this was the direct link to Dollands Moor. Parliament specified that this connection with the freight yard had to be in place and commissioned concurrent with ''Section 1'' of the CTRL. The thinking behind this indicated that the high-speed line would be able to carry as much freight traffic as possible from the outset. With hindsight, predictions concerning levels of Chunnel freight were indeed optimistic at the time, and today, such traffic is comfortably accommodated on the existing domestic lines. On 1st April 1999, ''Balfour Beatty Major Projects'' was awarded the contract to build the ten mile Ashford to Cheriton section of the CTRL's ''Phase 1'', this being priced at some £75 million. Formal completion of this stretch of line, combined with the whole of CTRL Phase 1, came on 5th August 2003, when at 11:00 that morning, all track work was fully commissioned for operation. Scheduled international services commenced along the newly-opened line on 28th of the following month. 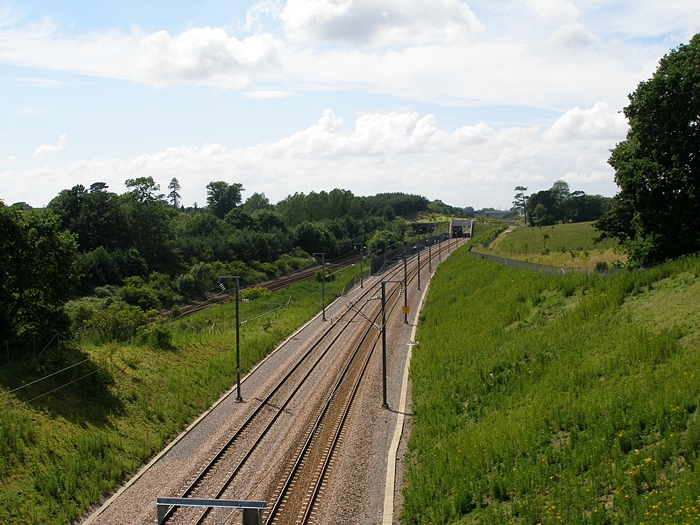 This westward view from 21st June 2007 shows both Kent Coast and CTRL lines running parallel, away from Sandling. In the background can be seen both lines' respective 100-yard long Sandling Tunnels. © David Glasspool 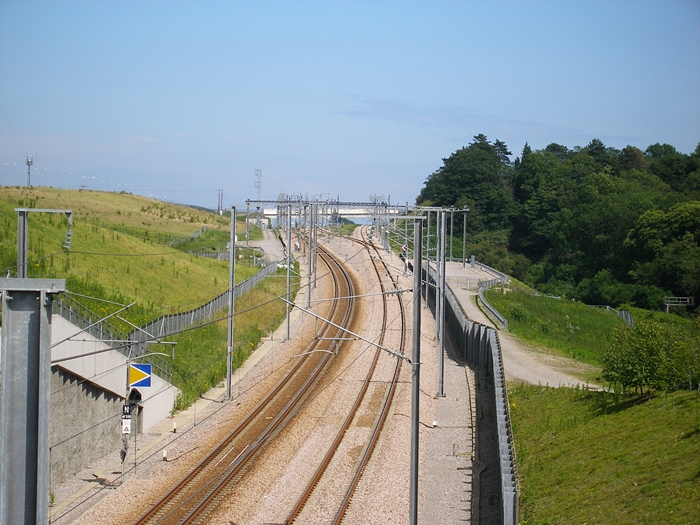 An eastward view on 21st June 2007 from the same road bridge reveals the divergence of ''up'' and ''down'' CTRL tracks. The formation of the single-track connection to Dollands Moor can clearly be seen here. © David Glasspool 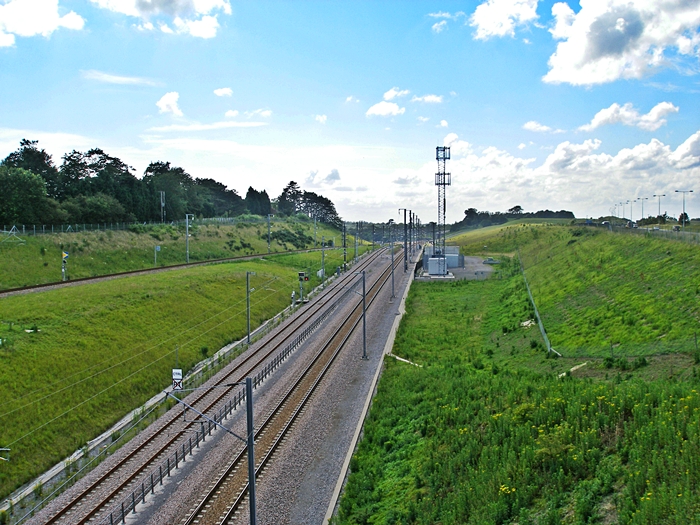 A second westward view from 21st June 2007 is this time taken from beyond the point of divergence. On the far left is the ''up'' CTRL line, whilst in the foreground is the ''down'' track and the single line connection with Dollands Moor. The latter pair are separated by a partition of railings. © David Glasspool