This is one of four tunnels situated on that part of the CTRL which formed construction Contract 420. The latter encompassed 20-KM (12¾-miles) of double-track line from Boxley, on Maidstone's outskirts, to Lenham Heath, which passed through an environmentally sensitive area. In an attempt to preserve the landscape and ensure the line's infrastructure had as little impact as possible on the localities through which it passed, a "cut-and-cover" tunnel approach was taken at Boxley, Hollingbourne, Harrietsham, and Sandway. The structure which emerged at Harrietsham is perhaps the black sheep amongst these, but at the other three locations, lengths of cutting were essentially "roofed" with earth and grass, providing both a noise barrier and favourable aesthetics.

Sandway is a village about 9-miles northwest of Ashford, situated a few hundred yards north of the M20, and its northern periphery today straddles "High Speed 1" by means of the aforementioned cut-and-cover tunnel. As per that at Hollingbourne, the structure at Sandway was formed using precast concrete segments. These were of a curved profile and when assembled, created a tunnel 170 metres long, 13.3-metres wide, and 8.4-metres high. The tunnel's design was the product of the "Reinforced Earth Company" of Telford, Shropshire, a specialist in precast concrete arch construction, having been subcontracted by ''Hochtief'' and ''Norwest Holst''. The latter was the joint venture which won the bidding process for building the Boxley to Lenham stretch of the CTRL. Civil engineering works for this portion began in June 1999, with a target completion date of October 2001. 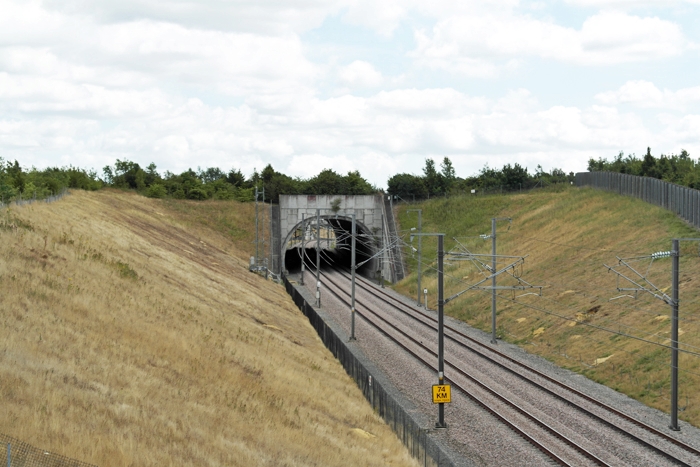 An Ashford-bound view shows the northwestern portal of Sandway Tunnel which, like that at Hollingbourne, has steep staircases flanking it either side. The line ascends through the tunnel in the "down" direction. The nucleus of Sandway Village is behind the trees to the top right of the portal. © David Glasspool