This is a fine station, which opened with the SER’s extension from Minster to Deal on 1st July 1847. It is certainly worthy of the renowned golf course which followed it forty years later. Both Sandwich and Deal station buildings were constructed to an identical design, but since the latter acted as a terminus for thirty-four years, it was graced with an overall roof – Sandwich was instead host to a standard platform canopy, attached to the main structure. The main building here was situated on the ‘’down’’ side, whilst the ‘’up’’ side was provided with the customary timber waiting shelter with slanting roof. In common with waiting shelters of the period, no roof valance was in evidence from the outset, but when most other ex-SER shelters received these in the early 20th century, the example at Sandwich would appear to have missed out. The layout was not bypassed, however, when the time came for a large-scale replacement of track foot crossings between platforms and in 1894, a lattice footbridge appeared at the western extremities of the complex. A signal box, situated at the western end of the ‘’up’’ platform, had preceded this by some two years. Designed and erected by Saxby & Farmer, a well known signalling contractor for both the SER and LC&DR, it was virtually identical to the example still in existence at Sturry.

Goods provision here was more than adequate, and sidings flanked either side of the station building. The first set of sidings were sandwiched in-between the level crossing and platform, complete with a five ton crane. Three goods sidings also trailed off from the eastern end of the layout, on the ''down'' side, and laid at about forty-five degrees to the station complex. This goods arrangement seems to be a common one, with the yards at both Martin Mill and Deal being situated in such an angled fashion in relation to the station buildings. Particular mention should also be made of Sandwich’s goods shed: this never accommodated any track, instead having a canopy attached to its southern elevation to protect the siding immediately adjacent. Finally, an additional loop siding was situated behind the ‘’up’’ platform, this usually being used for further freight stock storage.

The station here has seen a number of noticeable changes fairly early on in its history, but has nevertheless retained a traditional appearance. The most major of these has affected the station building: in 1892, it received new first floors on both eastern and western elevations, and a further single-storey high extension appeared on the western elevation. This was evidently a busy year, it already having been mentioned that the signal box arrived at the same time. It is possible the opening of the golf course instigated for the main building to be enlarged in such a way – indeed, the first Open Championship was held in Sandwich in 1894. The Saxby & Farmer signal box was an early casualty, this being closed by the Southern Railway in January 1938 and replaced by another cabin on the ‘’down’’ side, immediately adjacent to the level crossing. It came into use on 30th of that month. Even the SR build had hints of Saxby & Farmer design about it – a similar contemporary example can also be found at Aylesford.

As with most stations, there is the inevitable decline to report on. It is without surprise that the goods yard was closed to traffic in October 1963, but the station itself has fared the years well. The platforms saw lengthening at their western ends with concrete cast extensions during 1960 as part of the Kent Coast Electrification: electric services began southwards from Ramsgate on 2nd January 1961. Semaphore signals remained a feature of the station for a number of years later, until colour aspect lights ultimately replaced these during May 1981. The signal box remained, however, this having supervised automatic lifting barriers since 1973. In more recent times, the classic waiting shelter has seen both of its side windows blocked out, but at least this, the station building, and the footbridge – all historically important structures – still stand. 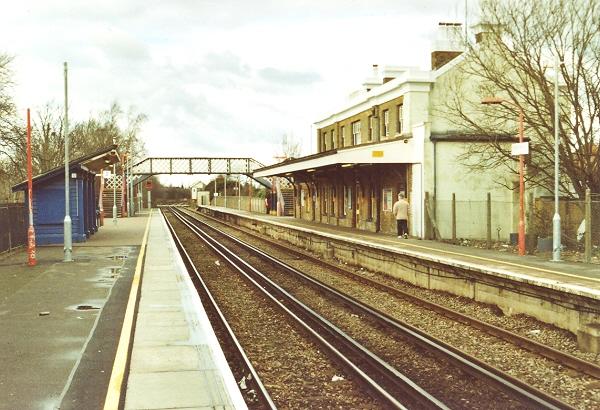 building and the delightful timber waiting shelter remain to this day, in good condition, in

the company of the 1894-erected lattice footbridge. The loop siding formerly sat behind the 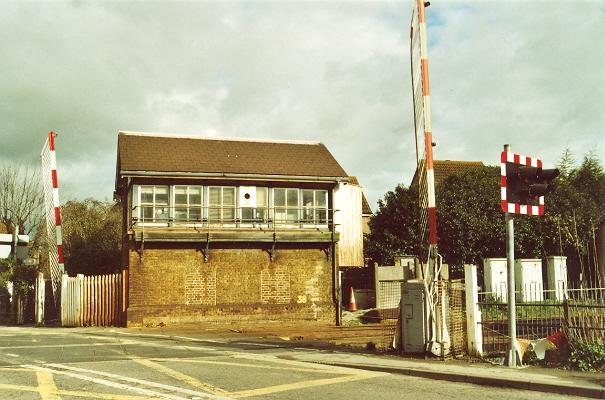 The low winter sun reflects off the signal box of 1938 origin, as the level crossing is viewed on

12th February 2005. This has been protected by automatic barriers since July 1973. From this

perspective, the station is situated beyond the scope of this picture, on the right. David Glasspool 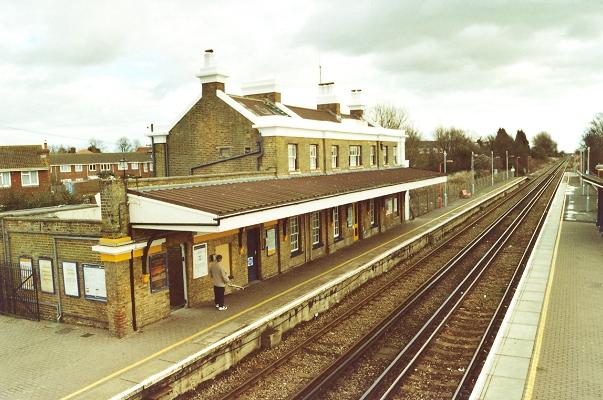 An eastward view on the same day reveals the main station building to be in solid condition,

although now with a simplified canopy valance. The overgrown area, fenced off and beyond

the structure, was formerly host to a dock line. The houses in the background, on the left, sit