In 1859 an independent concern known as the ‘’Sevenoaks Railway’’ was formed to link the LC&DR’s main line with the market town of Sevenoaks. A 7-mile 76-chain single-track branch was planned to spur off a mile from a locality known as ‘’Swanley Village’’, east of St Mary Cray. At its southern end, the branch terminated on the outskirts of Sevenoaks; this was forced upon the company by local landowners who opposed the railway running over or near their property. The branch opened on 2nd June 1862 and an interesting array of facilities were provided at the company’s ‘’Sevenoaks’’ terminus, but first, perhaps a description of the station itself would not go amiss. Two platform faces were in use from the beginning, the ‘’down’’ side being graced with an impressive station building, certainly worthy of a terminus, even though it was somewhat isolated from the main town centre. Two-storeys high at its tallest point, the building demonstrated patterned brickwork, augmented by intricate window arches and gabled roof sections – a far cry from the LC&DR’s typical ‘’white-wash’’ surfaces! The ‘’up’’ side was host to a timber waiting shelter, but even this was treated to an intricate valance, and boasted wrap-a-round sides. A track foot crossing was in use from the outset between platforms, although a covered footbridge with a triangular-patterned frame appeared about three years after the formation of the SE&CR.

As the station was originally a terminating point, an engine shed was established there, this being located on the ‘’down’’ side, to the south west of the station building. Direct access to the building was not possible, engines instead having to be rotated on a 45 foot turntable. The shed itself looked a very temporary affair, it being fed by a single track, featuring a pitched roof and being wholly clapboard in construction – something the SER would be proud of! A water tower was also in evidence, albeit situated on the opposite side of the running lines to the shed. Stewarts Lane would usually provide a single locomotive to run off Bat & Ball, this of which would form the shuttle from Swanley Junction. Goods facilities were available here, a single-track shed being positioned on the ‘’down’’ side, at forty-five degrees to the station building. Later, this was also in the company of a coal depot, and additional freight sidings appeared behind the ‘’up’’ platform and on the ‘’down’’ side.

On 1st June 1874 an eastward single-track extension from Otford to Maidstone came into use and a station was opened on the junction. However, branch trains from Swanley Junction would still proceed to Bat & Ball, then reverse back to Otford and continue onwards to Maidstone. Doubling of the line to Maidstone was completed in 1882 and previously, on 1st August 1869, the Sevenoaks terminus had become a through affair when a connection was made with the SER’s Tubs Hill station. It was then that the ‘’Bat & Ball’’ suffix was acquired, after a nearby pub, and marked the beginning of the Otford to Bat & Ball stretch of line becoming an unimportant appendix to the Maidstone route. It is interesting to note that both companies’ Sevenoaks stations did not simply receive ‘’SER’’ and ‘’LCDR’’ suffixes to distinguish themselves. An infrequent shuttle service was inaugurated between Otford and Tubs Hill stations when the former opened on 1st August 1882, this having a dedicated bay platform for the Sevenoaks train from the outset. The engine shed at Sevenoaks Bat & Ball remained in use, however, despite the decline in services.

A signal box of the LC&DR’s own in-house design was erected at the northern end of the ‘’down’’ platform, not long after the Maidstone line doubling. A local gas company received a dedicated siding spurring off from the station’s ‘’up’’ side, this coming into use shortly after the turn of the century. However, it was the Southern Railway’s electrification which would herald a number of significant changes. The 1923-formed SR was constituted mostly of ex-LSWR Board members, thus this company’s 660 Volt D.C. third rail system prevailed. Shortly after the Grouping, an electrification scheme was begun on those ex-SE&CR suburban lines. Bickley had been reached from the London direction by July 1925 and on 6th January 1935, electric services commenced to Swanley and Tubs Hill via Bat & Ball. This brought a vastly improved service to the ‘’forgotten’’ appendix, but also saw some layout rationalisation. Electrification made the engine shed completely redundant and subsequently, by the end of the year, both the building and turntable had been removed. Steam did continue to visit the site, however, goods facilities remaining open for many years later, closure not coming until as late as March 1968. By this time, Type 3 diesels had arrived in force and taken over freight working. The next bout of electrification was that of the Kent Coast, which included extending third rail on the ex-SER main line eastwards from Tubs Hill. For this, a new ‘’power box’’ was installed at the main line station, coming into use on 4th March 1962 and taking over the functions of numerous mechanical cabins. It also controlled the branch to Swanley as far as Otford Junction, which allowed the signal box at Bat & Ball (which had lost its ‘’Sevenoaks’’ prefix on 5th June 1950) to be switched out of use. It remained in situ, however, to control the goods yard when required, and up until the last of the station’s sidings went out of use in 1981, marking its closure on 22nd November of that year. In common with most redundant cabins, it was later demolished.

Today, the station retains its original main building and, surprisingly, the original timber waiting shelter has not succumbed to a glazed bus shelter. However, there have been changes: although the footbridge remains, it has lost its roof, this being removed around the time of the signal box’s closure. The ‘’up’’ platform was rebuilt by the Southern Railway in prefabricated concrete, and the waiting shelter has since lost is wrap-a-round sides and a substantial part of its canopy valance. The main building remains in solid condition – at least externally. 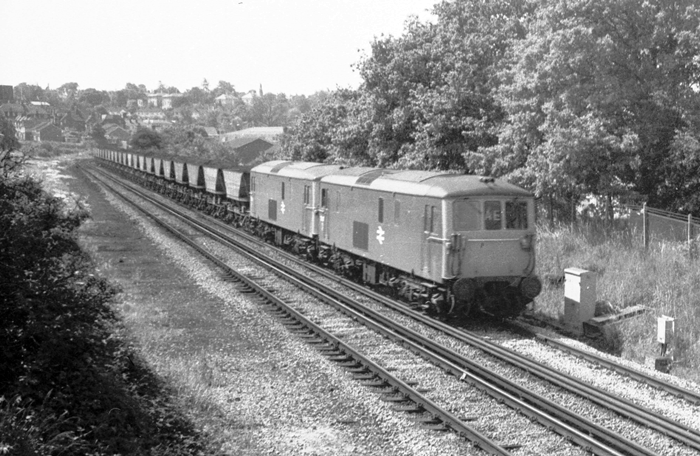 After negotiating the sharp curves through Bat & Ball station, 73127 and 73129 accelerate past the former goods yard with a Betteshanger Colliery to Scunthorpe MGR service loaded with coking coal for use by British Steel. The class 73s and Hither Green crew will work as far as Cricklewood Brent Sidings, from where the train will be worked forward by London Midland Region resources. © David Morgan 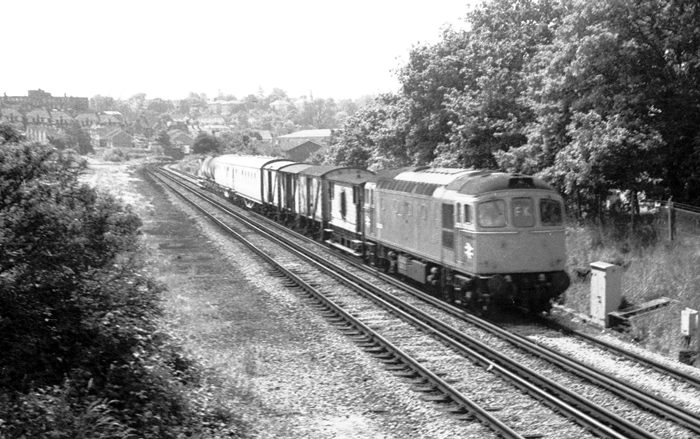 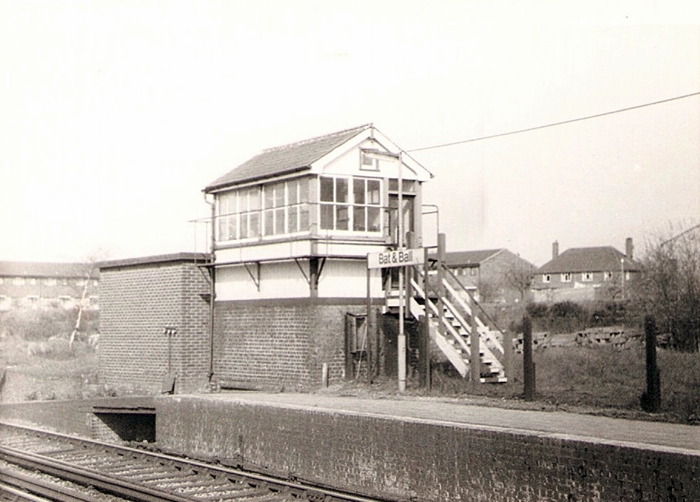 The LC&DR-designed signal box is seen at the London end of the ''down'' platform, complete with relay room, on the left. The signal box closed on 22nd November 1981. © David Morgan