Known today as “Samphire Hoe”, a nature reserve set below the famous White Cliffs of Dover, catering for walkers and anglers all year round, this is a site which can trace its first association with the Channel Tunnel concept back nearly 140 years. The nature reserve, which covers an area of 74 acres, is situated upon a platform, nearly a mile in length, jutting out into the English Channel. Formed largely by the waste spoil excavated during the boring of the Channel Tunnel, the area is owned by "Eurotunnel", and was opened to the public on 17th July 1997.

The first tunnels to pass through the area were those of the South Eastern Railway, which formally opened a double-track extension from Folkestone to Dover to passenger traffic on 7th February 1844. Three tunnels were bored: Martello, Abbotscliff, and Shakespeare, at lengths of 532-yards, 1,942-yards, and 1,387-yards respectively. Shakespeare Tunnel, unlike the other two mentioned, was unusual in comprising twin bores, each containing a single track.

On 15th January 1872, the “Channel Tunnel Company” was incorporated. The company’s intention was to commence tunnel boring experiments at St Margaret’s Bay, about three miles east of central Dover. Works were never started as a result of a lack of capital, and neither of the established railway companies in the area – South Eastern nor London, Chatham & Dover – were interested in providing any financial backing. However, in 1874 the SER, under the direction of Sir Edward Watkin, was authorised to bore experimental shafts on its property at Shakespeare Cliff, Dover, with a view to developing its own Channel Tunnel Scheme. An initial capital of £20,000 was authorised, but the powers obtained were limited to test bores and not a complete tunnel to France.

At Shakespeare Cliff existed a chalk platform, near the western mouth of the SER’s twin-bore tunnel, which extended out to sea for about 140-yards at its furthest point. Like the Channel Tunnel works which followed 150-years later, this part of reclaimed land was created by dumping debris into the sea. During construction of the Folkestone to Dover extension in 1843, explosives were used to take out a large chunk of chalk at the Shakespeare Cliff site, to avoid the need for another tunnel. The resulting chalk descent into the sea created a platform, known as the “Great Fall”, which covered an area of 18 acres.

Between 1874 and 1881, the SER sunk two vertical shafts, one near Abbotscliff Tunnel, the second to the west of Shakespeare Cliff Tunnel. The shaft at Abbotscliff was 74-foot deep, from which a tunnel heading of 7-foot diameter was driven east, for between 800 and 900 yards. Progress of excavation was 67-yards a week, at which rate it would have taken over five years just to get to the middle of the Channel. The shaft at Shakespeare Cliff was bored to a depth of 155-foot, from which a tunnel heading of 7-foot diameter and 2,015-yard length was bored. Neither of the tunnel headings were bored in the direction of France, mostly following a course below the shoreline.

Watkin’s intention was that the SER would not bear the cost of a Channel Tunnel scheme. As a result, three miles of coastline and the aforementioned test shafts and tunnel headings were sold to a new concern, incorporated on 12th December 1881, by the name of the “Submarine Continental Railway Company Limited”. In return, the SER received £10,000 cash and £20,000 worth of shares in the new company. The transaction came with the added risk that the government could take possession of the Dover works at any time, without paying compensation. Whilst experimental bores had been formally authorised, the legality of a complete tunnel to France was not clear.

The experimental boring works between Abbotscliff and Shakespeare Tunnels were conducted by Francis Brady and Colonel Frederick Beaumont. The former had been the SER’s engineer since March 1870; the latter had been in the Royal Engineers and retired from the British Army in 1877. Beaumont had developed a tunnel boring machine, refined by fellow army officer Thomas English, which was used in the experimental operations at Dover. It was built by "Greenwood & Batley" of Leeds, powered by compressed air, and stretched to a length of 30-foot.

On 6th July 1882, Channel Tunnel boring operations at Dover were suspended by order of the Board of Trade, by which time the tunnel heading from the Shakespeare Cliff shaft had reached 2,026-yards in length. At the time, scare stories about a possible French invasion of England through the proposed Channel Tunnel had been gathering momentum, and the government refused to give permission for the project. On the French side of the Channel at Sangatte, a tunnel of 2,012-yard length had been completed.

In 1886, on the recommendation of William Boyd Dawkins, a geological consultant to the SER, drilling for coal commenced at the former Shakespeare Cliff Channel Tunnel works site. A shaft was bored adjacent to that which had been completed for the abandoned Channel Tunnel project. On 17th February 1890, it was reported that coal had finally been reached, at a depth of 1,180-foot below the surface. However, it was not until 1896 that the discovery was turned into a commercial venture on the formation of the “Kent Coalfields Syndicate Limited” in March of that year. The company raised capital through the issue of 200,000 shares priced at £1 each and was formed to take over the abandoned Channel Tunnel works site.

In June 1896, the first mine shaft at Shakespeare Cliff was started. On 16th October, when the shaft had reached a depth of 366-foot, water flooded in. Undeterred, the company proceeded with the boring of a second shaft in the following month, and by March 1897 this was over 300-foot deep. Disaster struck when this shaft was also flooded by water, and of the fourteen men who were working within the bore at the time, eight perished. In the wake of the flooding disasters, the “Kent Coalfields Syndicate Limited” was liquidated and its operations and assets taken over by the “Kent Collieries Corporation Limited”, which had been formed in October 1897. Coal mining at the site never developed on the scale of those enormous pits in the Midlands and Wales, and operations ceased in 1915.

In 1922, further boring experiments were conducted, this time with an electronic machine in the cliffs above Folkestone. During the period, the military was still dead against any Channel Tunnel, so the test boring went no further.

The Shakespeare Cliff site was to witness another bout of construction activity when, on 13th November 1973, the "Channel Tunnel Bill" was introduced to Parliament. The Bill made financial provision for initial construction works on a tunnel to begin and received its second reading in the House of Lords in the following December. In 1974, construction work got underway, which began with boring an inclined road from the top of Shakespeare Cliff, down to the former Kent Colliery site. The tunnel accommodated a single-track road and elevated footpath, and was about 315-yards long.

Below the portal of the road tunnel was bored another inclined heading, at the end of which was excavated a large area to accommodate the assembly of the Channel Tunnel boring machine. The latter was manufactured by "Robert L. Priestley Ltd" of Gravesend and had a diameter of 5.3 metres (17.39-foot). However, this Channel Tunnel attempt was short lived and in January 1975 the project was again cancelled. The reason given this time was that acceptable agreements could not be reached between the then new Labour government and the companies which were earmarked to build the tunnel. However, between February and April 1975, the Priestley machine bored a 250-metre-long (273.4-yards) tunnel, this of which was lined with concrete segments, simply to demonstrate its capabilities.

The Channel Tunnel would finally become a reality after the signing of the ''Fixed Link Treaty'' by British and French Governments on 12th February 1986. This had been preceded on 18th October of the previous year by the formation of Anglo-French engineering group ‘’TransManche Link’’ (TML), which was appointed as the contractor to build the Channel Tunnel. At Shakespeare Cliff, the works began with the boring of a 10-metre (33-foot) diameter access shaft from the top of the cliff, through which components of the boring machines could be lowered to the main tunnel construction site. Six tunnel boring machines started their journeys at the Shakespeare Cliff site: half of these dug in the direction of the proposed terminal site at Cheriton (Folkestone); the remainder headed under the Channel.

The Channel Tunnel bore was lined with hundreds of thousands of concrete segments. These segments were reinforced with a steel framework and were manufactured at specially-built plants on both sides of the Channel. On the French side, the segment factory was on site at Sangatte, but on the British side, there was not enough room to accommodate the works at Shakespeare Cliff. Consequently, a 70-acre site was used on the Isle of Grain, which had formerly been part of BP's Kent Oil refinery. As the crow flies, this was 34½-miles from Shakespeare Cliff, but by rail - which was to be the method of segment delivery - the site was 99-miles away. The high mileage was a result of the circuitous route the segment trains would be taking, going via Sidcup and the Lee Spur, before heading coast-bound via Sevenoaks and Tonbridge. The first of about 1,000 Channel Tunnel segment trains arrived at Shakespeare Cliff from the Isle of Grain on 26th September 1987. 442,755 individual lining segments were manufactured on the Isle of Grain, the last rail-borne delivery to Shakespeare Cliff being made on 17th May 1991.

8,000,000 cubic metres of spoil was generated during the boring of the Channel Tunnel, which had to be disposed of. The French created an artificial lake on their side of the Channel, within which the spoil was dumped and then grassed over. On the British side, the spoil was used to triple the size of the existing platform at the foot of Shakespeare Cliff. This involved construction of a sea wall in the westward direction, which created a couple of lagoons, and into the latter was dumped Channel Tunnel spoil.

At Shakespeare Cliff, substantial ventilation and chilling plants were built on the former colliery site, adjacent to the inclined approach to the 1974 road tunnel. Similar installations were made on the French side at Sangatte. The chilling plants pump cold water into pipes - of which there are two in each rail tunnel - to absorb the heat generated by passing trains. The hot water is subsequently returned to Shakespeare Cliff and Sangatte for cooling down; it is essentially a giant version of a car’s cooling system. 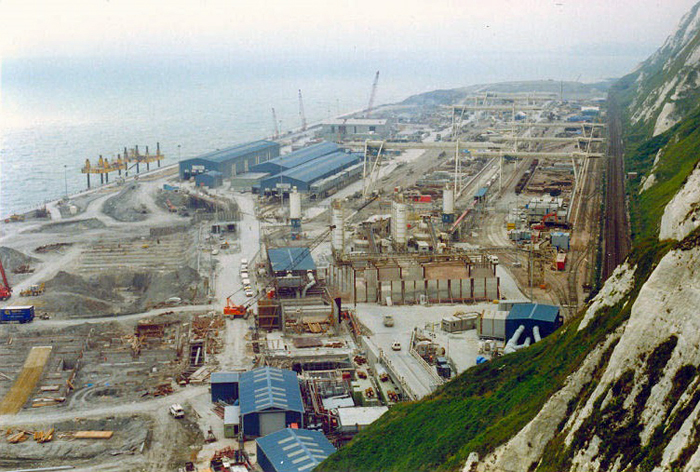 British Rail's line between Dover and Folkestone is seen on the far right of this south westerly view, which shows construction work at the Shakespeare Cliff site in full swing. Railway sidings were established to take delivery of building supplies delivered by rail, such as the concrete segments to line the tunnels. To the bottom left, foundations are seen being laid for what will become the Channel Tunnel's cooling and ventilation plants. Formal opening of the Channel Tunnel occurred on 6th May 1994. On the left are two of the four jack-up platforms (identified by David Morgan) used during the construction of the new 1795-metre-long sea wall around the Lower Shakespeare Cliff site. © John Horton