Despite a rather ugly partial rebuild, necessitated through collision damage inflicted on the site during 1971, this is a terminus which still manages to retain some of its bygone charm. It can be found at the end of a 7½-mile branch from the ‘’Chatham’’ main line, amongst decidedly industrial surroundings. The route’s origins can be traced back to 1856, when an independent concern known as the ''Sittingbourne & Sheerness Railway'' was established to forge a line across the River Swale to Sheppey. Three years earlier, the ''East Kent Railway'' had been sanctioned to construct a double-track line between Strood and Faversham; the company started running services between the latter and Chatham on 25th January 1858.

The engineer of the Sheerness branch was one John Cass Birkinshaw, the same man of who was employed by the '’Lymington Railway Company'' to construct a short picturesque branch through the New Forest. Unlike its Hampshire counterpart, the branch to Sheerness was destined to become very much an industrial route, but would nevertheless still entertain beach-goers from the capital. An eastward-facing junction between the branch and main ‘’Chatham’’ route appeared ½-mile west of Sittingbourne. The branch was single-track throughout, but a loop was provided at Queenborough – the line’s only intermediate station – to allow trains to pass. Architecture was standardised along the line: an imposing two-storey-high gothic affair emerged at Queenborough, and a smaller, single-storey structure, demonstrating the same design traits, came into use at the Sheerness terminus. Birkinshaw had expended similar efforts producing the attractive and architecturally similar building at Lymington Town station. In light of these accomplishments, it is a pity the Sittingbourne & Sheerness Company did not share his enthusiasm, for he was sacked from his post midway through construction. The railway company’s directors blamed him for slow progress, and the engineer was swiftly replaced by T.E. Marsh. Services eventually commenced between Sittingbourne and Sheerness on 19th July 1860, these being operated by the LC&DR from the outset.

The LC&DR absorbed the smaller Sittingbourne & Sheerness Company in 1866, by which time a triangular junction between the branch and main line had been provided. Double-track was in evidence on all sides of the triangle, this immediately converging to a single formation on the advent of the branch line. Ten years later, further traffic was generated when the Sheerness line sprouted an arm at Queenborough. This short spur terminated at ‘’Queenborough Pier’’, which had been provided to serve the boat services of the ‘’Zealand Shipping Company’’. These had then recently transferred from Ramsgate.

The branch line terminated half a mile west of Sheerness, so early efforts were made to bring the railway closer to the town. This involved the construction of a single-track spur emanating from the existing Sheerness station, which terminated at a new site to the east. Peculiar reversal manoeuvres seem to have been the forte of the pre-Grouping companies in Eastern Section territory. Classic examples include the scenario when virtually every Charing Cross train was reversed at Cannon Street, in addition to the reversal required at the SER’s Ramsgate Town station, on the branch to Margate (Sands). The Sheppey line was to be no exception, and in order to reach the new terminus, a reversal into the original Sheerness station was required. Formal opening of the new spur to public services occurred on 1st June 1883: the original terminus became ‘’Sheerness Dockyard’’, whilst the second station was christened ‘’Sheerness-on-Sea’’. The ‘’on-Sea’’ suffix was a deliberate measure to promote the route as a holiday line, as opposed to the industrial reputation it had already acquired.

The new terminus demonstrated a neat layout, comprising a pair of platforms separated by a triple track. The central line acted as a run-a-round loop shared by the two platform lines, and the layout was flanked on either side by a siding (a recent track layout can be found in the Sheerness Steel section). Controlling the site was an attractive Saxby & Farmer signal cabin, positioned at the Sittingbourne end of the layout. This was a tongue-and-groove timber affair comprising a hipped roof, and was built to a standard design. Of similar construction was the main station building, which had been erected end-on to the tracks. This was a structure that the SER would have been proud of: it was single-storey, of tongue-and-groove timber construction with a slated pitched roof, and came complete with sash-style windows. Attractive upward-sloping canopies, 215-feet in length, appeared on both platform surfaces; their intricate timber valances were of a standard pattern, one which can still be seen in its full glory at Westgate-on-Sea. The canopies were separated from the main building by a roofed concourse, the latter of which hosted five pitched-roof glazed sections. Platforms were also lined at their rears with timber fencing, once a common feature at both LC&DR and SER stations. The lack of goods facilities at the 1883 terminus is explained by the concentration of freight traffic at the older Sheerness Dockyard site. 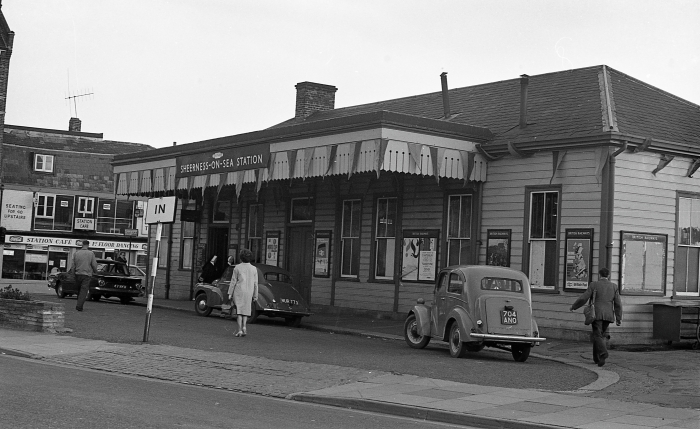 Bunting and football posters indicate this is World Cup year. The "British Railways" legend and Sausage Totems were in abundance, but posters were already reading "British Rail" with the then new "Arrows of Indecision" logo. The main building dated from 1883 and was of tongue-and-groove timber construction with sash-style windows and hipped-slated roof. Half of the structure was destroyed in February 1971 by a passenger train overrunning the buffer stops; the rest was demolished a short while later once a replacement was completed. The cars in view, from left to right, are a Ford Cortina Mk1, Morris Minor, and Ford Popular. A pair of nuns can just be picked out by the station's entrance. © David Glasspool Collection 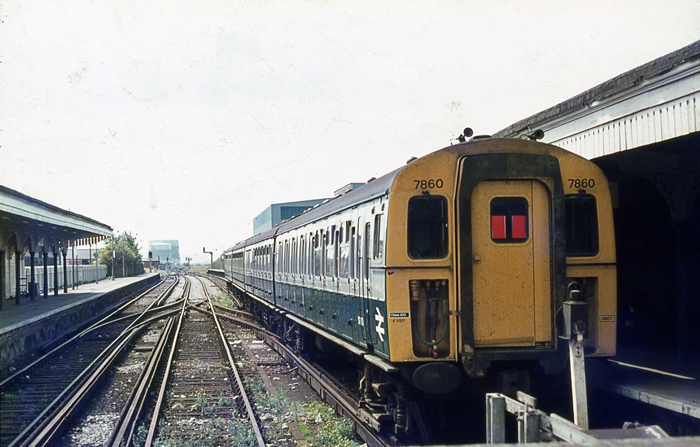 A south westerly view includes 4 VEP No. 7860 at platform 1 forming the shuttle service to Sittingbourne. Of note here is the the three-way point, making runaround movements possible from both platform lines. © David Glasspool Collection 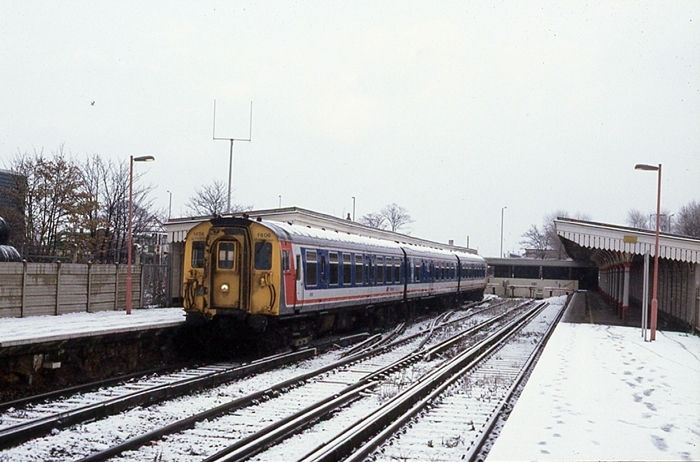 3 CEP No. 411406 is seen alongside platform 1, forming the shuttle service to Sittingbourne. Today, there exists a couple of peak-time direct services between London Victoria and Sheerness-on-Sea in either direction. Platform 2, on the right, is no longer used. © David Glasspool Collection