When the "Eurostar" operation commenced on 14th November 1994, the basic daytime timetable included trains from London to Paris and Brussels, services to/from the latter also calling at Lille Europe. In June 1996, this was expanded to incorporate direct trains between London and Marne-la-Vallée (where Paris' Disneyland resort had opened in 1992). In the following year, a winter-only service from Waterloo to Bourg-Saint-Maurice, a ski resort in the Alps in southeastern France, began. Yet another French destination was added to the Eurostar map in 2002, a summer-only service from London to Avignon starting. Since then, further destinations in southern France have appeared on the schedule, but what has not been achieved over this time is a penetration into Europe beyond there and Belgium. That is, of course, until now.

The main factor precluding operation in other mainland European countries has been the existing rolling stock, which is not compatible with signalling, power systems, or safety criteria of those lines further than the French and Belgian borders. This was set to change when, on 7th October 2010, Eurostar announced that £600,000,000 was to be spent on purchasing ten new electric multiple units. Intended to complement the original Class 373 fleet, the new EMUs were to incorporate the relevant technology to permit running to countries such as Netherlands, Germany, and Switzerland, in addition to those lines within the existing limit of operation.

The decision to purchase new rolling stock which, by doing so, opens up more European destinations for inclusion within the Eurostar network, has perhaps been brought about by the advent of competition. Since the outset in 1994, Eurostar has enjoyed a monopoly of passenger services through the Channel Tunnel between British, French, and Belgian capitals. However, the landscape began to change in February 2010 when German train operator "Deutsche Bahn" (DB) announced its intention to run a test train through the Chunnel, with a view to gaining an operator's licence. "Eurotunnel" revealed that the Chunnel was only operating at 50% capacity, so additional services could easily be accommodated. The abundance of spare paths is no doubt attributed to proposed services which have never run ("Regional Eurostar" trains, for instance), and that freight traffic is well below the level originally envisaged. DB had set its sights on running direct trains from London to Amsterdam and Frankfurt, via Rotterdam and Cologne respectively. The plan was to run services as a single train formation from London to Lille, then split them at the latter into separate Amsterdam and Frankfurt portions.

"Siemens" was selected as contractor for the new Eurostar stock, which was christened "e320" (e = Eurostar; 320 = top speed in KPH), and this was to be based on the existing "Velaro" family of units the company offered. The selection of German-based Siemens as the preferred bidder for the work sparked a legal challenge from French train builder "Alsthom", which claimed that the tender process was "ineffective". The argument made suggested that the contract awarded by Eurostar to Siemens was significantly different to that originally put out to tender. Given that over 50% of Eurostar is owned by SNCF, it was somewhat of a shock that a French company was not awarded the contract. The High Court ruled in favour of Siemens in July 2011.

The e320 has been based on the "D" model in the Velaro range, fifteen units of which were originally ordered by DB from Siemens in December 2008 at a cost of €500,000,000. The type was designed for high speed international operation from Germany, particularly in neighbouring Belgium and France, but also, as earlier mentioned, in the United Kingdom on the back of DB's plans to get a licence to operate through the Chunnel. Units comprise eight carriages, have a capacity of 444 passengers, and have an aluminium body shell, construction being undertaken at Siemens' Krefeld-Uerdingen factory in Germany. Introduction to service was bumpy, a result of disagreements between Siemens and the German Federal Railway Authority on technical specifications concerning safety criteria. The type finally received approval to run on the German national rail network on 20th December 2013, two years behind schedule. The order had since increased by two units to seventeen, one of these sets reportedly having been supplied at no extra cost to DB by Siemens as a way of apologising for the two year delay. 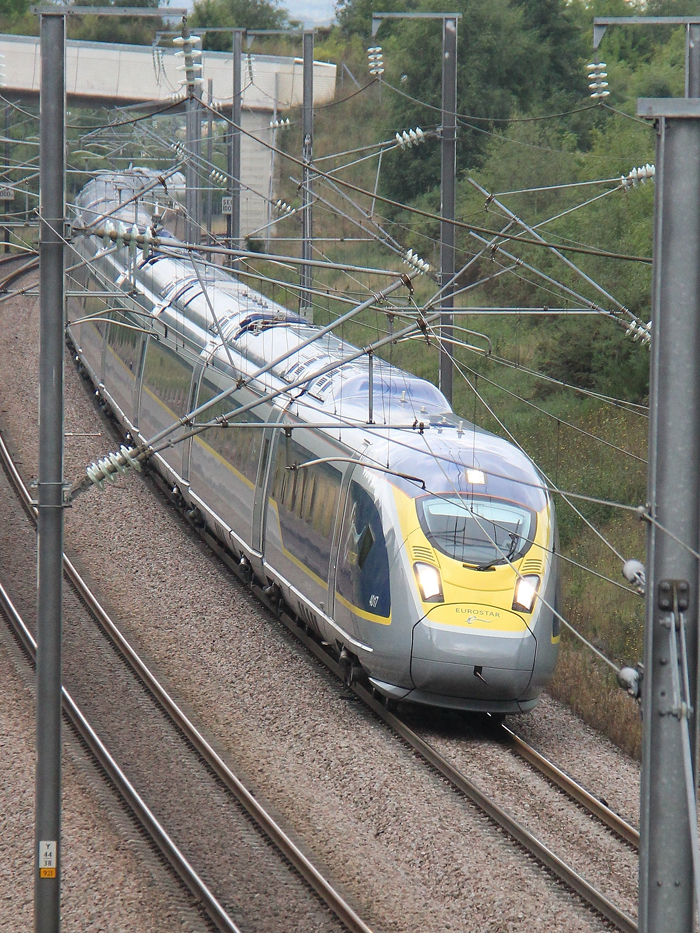 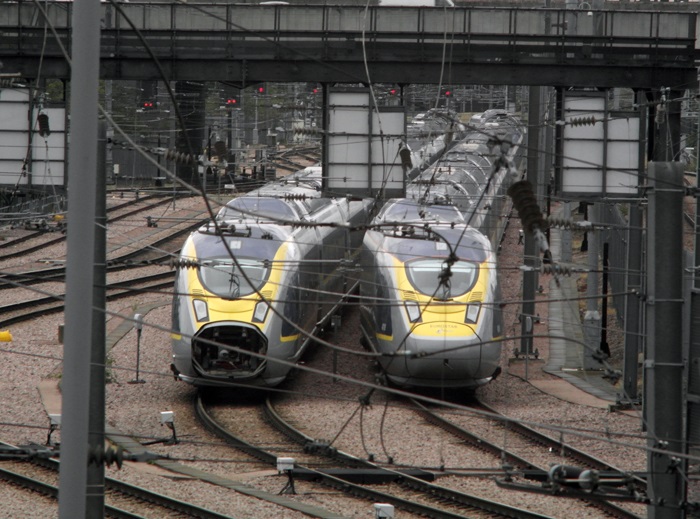 Two complete e320 formations are seen parked in those sidings east of Temple Mills Depot, one of which has its coupling cowling retracted. On the right are half set Nos. 374017 and 374018. © David Glasspool 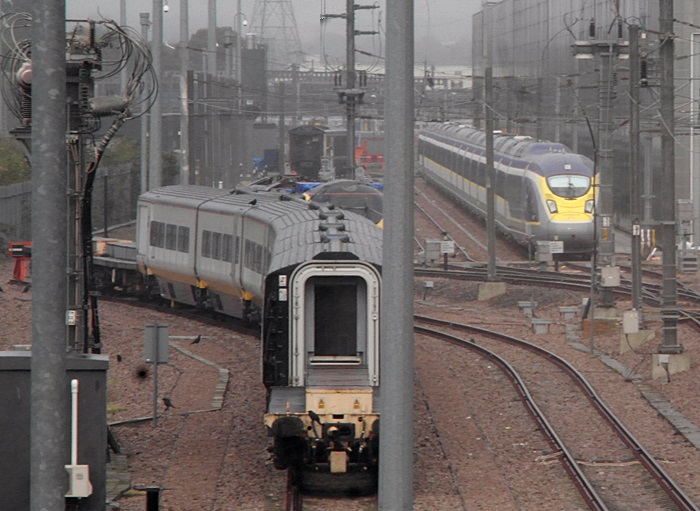 Parked alongside the heavy maintenance building was a third formation comprising half set Nos. 374011 and 374012. These were the half sets which were used during the formal unveiling of the e320 series on 14th November 2014. Prominent in the foreground is a Class 373 half set, less power car, from one of the short-formed "Regional" Eurostars. © David Glasspool