This was once the epitome of an economical, but attractive, SER timber-built station, dating back to the southward extension of the North Kent Line to Maidstone in 1856. Today, however, Strood is a depressing prefabricated affair, with only the passing of the recently-introduced ‘’Javelin’’ service breaking the air of austerity. In spite of appearance, this is a site with a decidedly interesting history, which began with the advent of a canal.

Act of 16th May 1800: An Act for making and maintaining a navigable Canal from the River Thames, near to the town of Gravesend in the county of Kent, to the River Medway, at a place called Nicholson’s Ship Yard, in the parish of Frindsbury, in the said county; and also a certain collateral Cut from Whitewall, in said parish, to the said River Medway.

As explained in the Higham & Strood Tunnels section, the raison d’être of this canal was to provide a passage for vessels between the Thames and Medway rivers, which avoided the circuitous journey around the Hoo Peninsula. The plan outlined a 6-mile, 7-furlong and 2-chain-long canal, 7-feet deep, which reduced the sailing distance between Gravesend and Strood by about 30-miles. This involved the feat of boring a 2-mile 1-furlong tunnel through a chalk ridge between Higham and Strood. Ralph Dodd and Ralph Walker were appointed joint engineers of the scheme, which eventually took a quarter of a century to realise. Although construction started soon after the passing of the Act, worked stalled through changes in the original plans. These alterations outlined a new route for the canal which avoided the laborious task of boring a long tunnel. The proposed canal without the tunnel would have been longer, at 9-miles and 1-chain. Four Acts of Parliament later, with various financial revisions, the original tunnel plan was settled on, and boring through the chalk ridge began in April 1919.

The ‘’Thames & Medway Canal’’ eventually opened to traffic on 14th October 1824, and its entry to the Thames was in the Parish of Milton, on Gravesend’s eastern outskirts. From there it followed a dead-straight alignment for about 2⅓-miles, after which it took a brief detour northwards, before finally assuming a south-easterly course towards the tunnel. The latter was 4012-yards-long and its width could only accommodate a single vessel and a tow path.

The canal was not a commercial success – five years after opening, it was reported as little used. Attempts to improve traffic flow were undertaken in 1830, which involved splitting the tunnel into two sections by creating a 151-yard gap. This provided a passing place for vessels, which meant barges could enter the tunnel section from Higham and Strood ends at the same time. As a result, two tunnels were born: Higham Tunnel, at 1529-yards-long, and Strood Tunnel, at 2332-yards-long.

The poor fortunes of the canal inspired the formation of the ‘’Gravesend & Rochester Railway & Canal Company’’. This came into being on 8th February 1844 with the aim of laying a single-track railway to George Stephenson’s 4-foot 8½-inch gauge, along the canal’s towpath. Work started immediately and to take the railway through the tunnel bores, a novel solution of propping up the line was devised. This involved laying one side of the track on the existing tow path and the other side upon a line of wooden piles driven into the canal bed. Although the tow path formed the track bed between Denton (Gravesend) and Strood, it is not clear if the railway followed the circuitous course of the water north of today’s Hoo Junction, or instead took the shorter cut-off route which the SER’s North Kent Line assumed from the outset. Trains started running on 10th February 1845.

Now onto the station at Strood itself. This resided about 350-yards from the tunnel portal and comprised a single platform face and four tracks, two of which terminated at miniature turntables. A trainshed, 125-feet by 50-feet, covered the platform and three of the lines. Presumably, this was akin to the roof at the Denton terminus, which comprised twin-pitched roof sections supported in the middle and around all edges by timber columns. The main station building was attached to the trainshed’s eastern side, and measured about 40-feet in length by 15-feet in width. Between Denton and Strood the fare was sixpence in each direction which, taking inflation into account, is £1.93 at 2010 prices.

The Denton to Strood railway was a success and by summer 1846, ordering of another two locomotives and further passenger trucks for Third Class passengers was on the cards. Coinciding with this was the takeover of the Gravesend & Rochester Railway & Canal Company by the South Eastern Railway. The latter had commenced through running between London Bridge and Dover, via Redhill and Tonbridge, on 7th February 1844, and in July of the following year submitted its ‘’North Kent Bill’’ to Parliament. Essentially, this proposed a line from the London & Greenwich Railway at the Grand Surrey Canal, to Chilham, where it would join the SER’s Canterbury branch. The course of the line was via Lewisham, Bexley, Dartford, Gravesend, Strood, Rochester, Chatham, Gillingham, Milton, Sittingbourne, and Faversham.

The SER bought the G&RR for £310,000 and formally took over the line between Denton and Strood on 16th May 1846. The route was then closed to traffic on 13th December of that year to allow doubling to commence. This involved the draining of the canal water through the tunnels and the in-filling of the 7-foot deep gap with earth. The line re-opened with two tracks throughout on 23rd August 1847 and, in the previous month, the North Kent Bill had successfully passed through Parliament. For the time being, the existing termini of the G&RR remained in use. 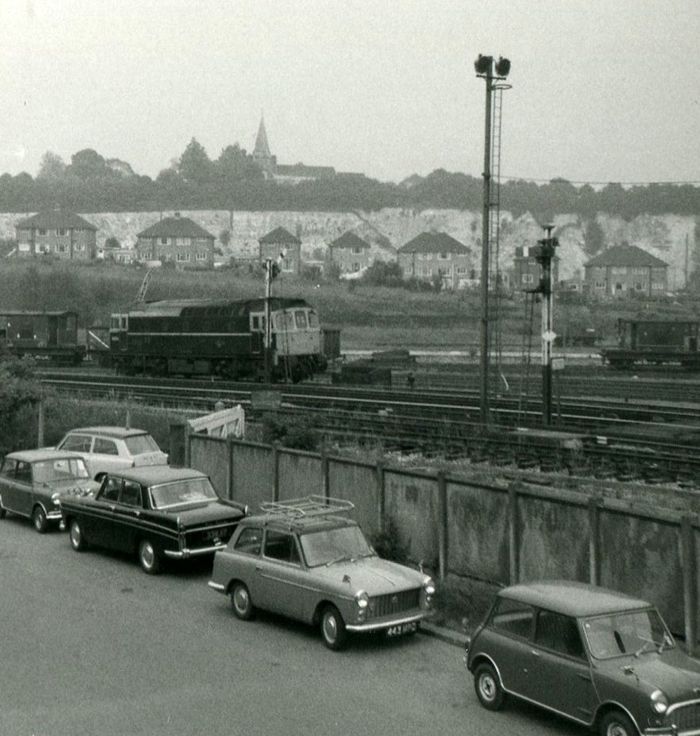 A ''Type 3'' diesel (latterly Class 33) is seen at the northern end of the layout, wearing BR Green but with full yellow warning panels. It had just finished shunting and was waiting to return ''light engine'' to Gillingham. The ends of the platforms are out of view, to the right. A fine display of period cars can be seen in the foreground: two Austin Minis, an Austin A40, and an Austin Cambridge. © Roger Goodrum 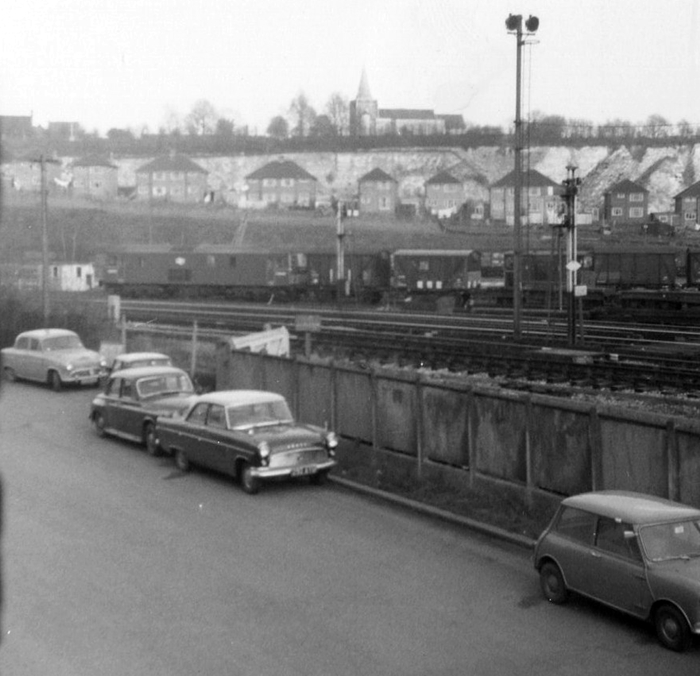 An Electro-Diesel (latterly Class 73) wearing ''Electric Blue'' livery with small yellow warning panels, is seen shunting vans in the goods yard. This view, taken from the photographer's bedroom window at the time, includes an Austin Mini (right), a Vauxhall Cresta, a Rover (either 60 or 90 model) and, at the back, a Standard 10. © Roger Goodrum 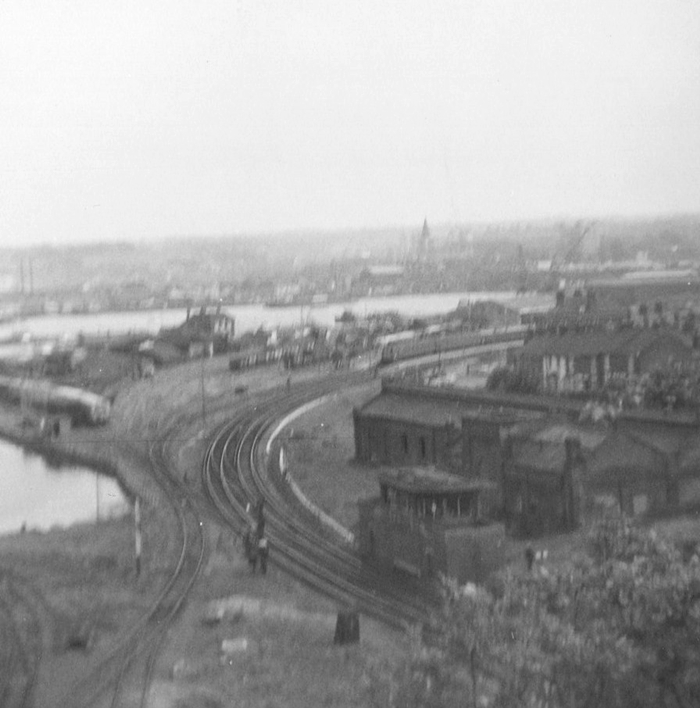 Upon the chalk ridge, to the left of and above the tunnel portal, we have our first glimpse of ''Strood Tunnel'' signal box and, behind it, the condemned engine shed. The tower which once supported the building's water tank can be picked out, and the structure is devoid of track, in preparation for demolition. An EPB can be seen in the station forming a ''down'' service and, behind this, the goods yard. © Roger Goodrum