This unusual station opened with the line which formed part of the South Eastern Railway's expansion into Thanet, between Canterbury and Ramsgate. Authorised by Parliament on 23rd May 1844, the SER's line between Ashford and Margate opened fully on 13th April 1846, Sturry coming into use on this date. The Ashford to Canterbury section had previously opened to traffic on 6th February 1846. Opened as ''Sturry for Herne Bay'', for many years this station purported to serve the seaside resort, despite potential seaside-goers facing a six mile trek cross the open fields to get there! Indeed, when the ''Herne Bay & Faversham Railway'' company established proposals to build a line between the two namesake locations, instigated by the LC&DR, the SER tried to have the scheme blocked, stating that Herne Bay already had a satisfactory rail service from Sturry. Unsurprisingly, this argument did not hold water and the alternative, better-sited route, running parallel with the coastline, opened on 13th July 1861. Trademark SER staggered red-brick platforms were brought into use at Sturry, either side of a level crossing, with a timber waiting shelter being provided on the ''up'' platform. It is, however, the station building on the ''down'' side which is of particular interest, this looking very untypical of the railway company in question. I know of no other station which shared the architecture of this single-storey, brick-built symmetrical structure. Sturry opened before the SER employed a network-wide policy of building stations cheaply - i.e. in clapboard - which goes a long way towards suggesting why this remote stop was able to command a brick building, certainly of comparatively large size in light of the area it served. It is worth adding that this building has never in its existence been adorned with a canopy. To replace the primitive signalling arrangements in use since the line opened, the SER hired contractors Saxby & Farmer to re-signal a number of station layouts in 1893, on both Ashford to Minster and Ashford to Hastings routes. The design of cabin used on both lines was standardised throughout, and that at Sturry was positioned on the ''up'' side, immediately east of the level crossing.

A diminutive station this may have been, but goods facilities did not go amiss. On either side of the level crossing, a single siding was in evidence, laying on the opposite side of the running lines to the platform. That on the ''up'' side was westward-facing, whilst the siding on the ''down'' side was in fact arranged in the form of a loop, with a set of points placed at either end.

The first casualties were the sidings, these officially going out of use on 1st May 1962. The line to Canterbury West was included within Phase 2 of the Kent Coast Electrification Scheme, the full electric timetable commencing on 18th June 1962. However, the platforms were not lengthened in connection with this, these now being rare examples of retaining the original brick ramps at either end -  this has since caused problems. Originally, lengthening was not justified on the basis that only the shorter-formed stopping services would use the platforms. In more recent years, longer-formed stopping services have called at the station, which has led to trains overhanging on the level crossing, delaying traffic. This is an issue Canterbury Borough Council has raised concern about! On 14th March 1964, the signal box at Canterbury West assumed the responsibilities of the cabin at Sturry, but the latter was retained as a gate box, controlling automatic barriers from June 1974 onwards. In 1968, the ''up'' side timber waiting shelter succumbed to a dreaded CLASP structure, but thankfully the main building on the ''down'' platform remained intact. The CLASP shelter lasted just over twenty years, it being replaced by an equally incongruous bus shelter, an example of which also appeared on the ''down'' platform. So far, the last major alteration to the station came in 2003, which heralded a revival for the signal box. The semaphore signals were decommissioned and replaced by colour aspect lights, which saw block post working come into use on the line. Thus, in addition to controlling the barriers, Sturry's cabin was restored to block post status (i.e. a signal box controlling the signals over a specified section of track). 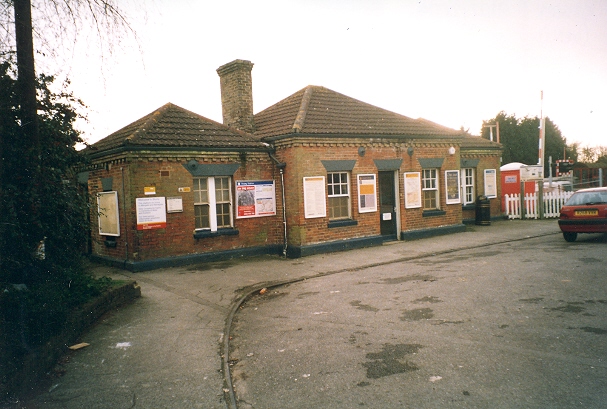 The station building at Sturry is an unusual, but simple symmetrical design with three pitched roof

sections. It is view on 8th February 2004, the level crossing being evident in the background. 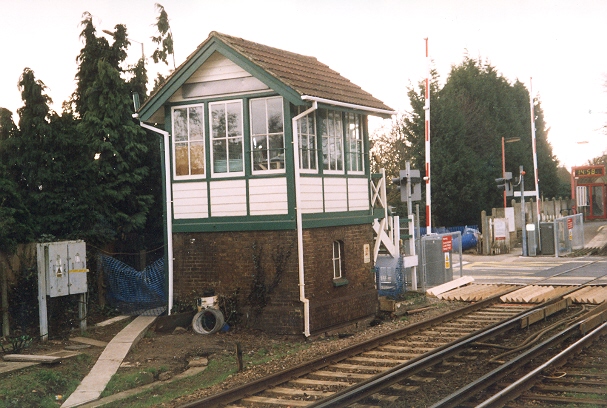 On 14th March 1964, Canterbury West took over the responsibility of Sturry signal box, and

it subsequently became a gate box. However, a 2003 re-signalling saw it restored as a block

post. Built by Saxby & Farmer, it is seen here on 8th February 2004. This design of cabin could

be found on both the Ashford to Hastings and Ashford to Minster routes, in addition to SER 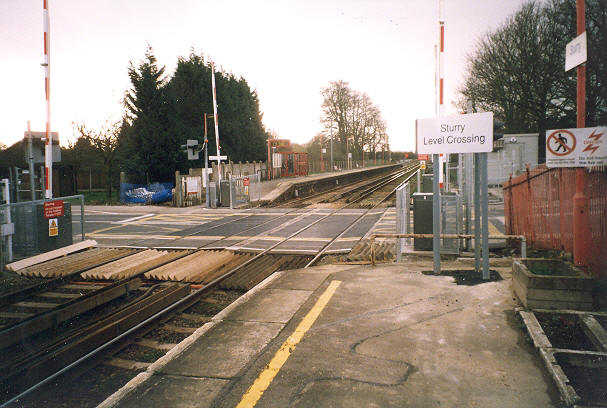 The platforms here are staggered, separated by a level crossing which utilises supervised full