On 12th February 1986, the British and French Governments signed the ''Fixed Link Treaty'' in Canterbury, which formally authorised the Channel Tunnel construction programme. On 5th July of the previous year, ‘’Translink JV’’was formed by five British companies with interests in the project and, on 16th of the same month, ‘’TransManche GIE’’ was established by five French concerns. Subsequently, on 18th October 1985, these two consortia merged, producing the Anglo-French engineering group ‘’TransManche Link’’ (TML).

TML had the single most significant role in the project: to build the tunnel under the English Channel. In October 1986, the consortium was granted approval for the construction of a large concrete works on the Isle of Grain. This covered a 70-acre site which was formerly occupied by a large number of storage tanks associated with the Kent Oil Refinery. Refining at the works ceased in 1982, which reduced British Petroleum's annual refining capacity by 77,000,000 barrels of oil. By this stage, refined oil was arriving in large quantities from the United States.

TML's works was required to produce just shy of half a million concrete segments for the UK tunnel linings. For this, four batching plants, each of 43,750-feet2 area, were established at the Isle of Grain site, within which segments were cast. The works commenced operation in September 1987 and from the outset, the site was connected to the single-track freight-only branch line from Hoo Junction, which had seen its last passenger trains as far back as December 1961. The connection allowed cement to be brought to the site by rail tankers, these emanating from Blue Circle's large works at Northfleet. Additionally, completed segments could be dispatched by rail, for which TML signed a contract with BR's "Railfreight" division in 1986. This involved the running of tunnel lining segment trains from the Isle of Grain to the Chunnel construction site at Shakespeare Cliff.

The first of about a thousand Chunnel segment trains departed Grain for Shakespeare Cliff on 26th September 1987. These trains were double-headed by Stewarts Lane-allocated Class 33 diesels which, from October 1987, came within the locomotive pool of BR's "TrainLoad Construction" sector. The trains embarked on a circuitous route to Shakespeare Cliff, travelling via Sidcup and the Lee Spur, to bring them onto the main line via Sevenoaks and Tonbridge.

Adjacent to the TML site on the Isle of Grain, Foster Yeoman established an aggregate railhead, primarily to supply the Chunnel segment operation. This received 2,000,000 tonnes of stone annually from the Glensanda ‘’Super Quarry’’ in Morven Lismore, on Scotland’s West Coast. Glensanda was opened by Foster Yeoman in 1986 as Europe’s largest coastal quarry and, given that the site lacked both rail and road access, all material had to be shipped out by sea.

The final full-length Chunnel segment train departed TML's Grain site on 15th May 1991. The very last segment train left on 17th of the same month, bringing production at the site to an end. In April of the following year, the northern 15-acres of the redundant site were earmarked for the construction of a gas-fired power station. This was commissioned in 1995, becoming "Medway Power Station", but the southern part of the former TML site, including the batching plants, remained, and was subsequently used for container storage as part of the 1993-opened Thamesport. 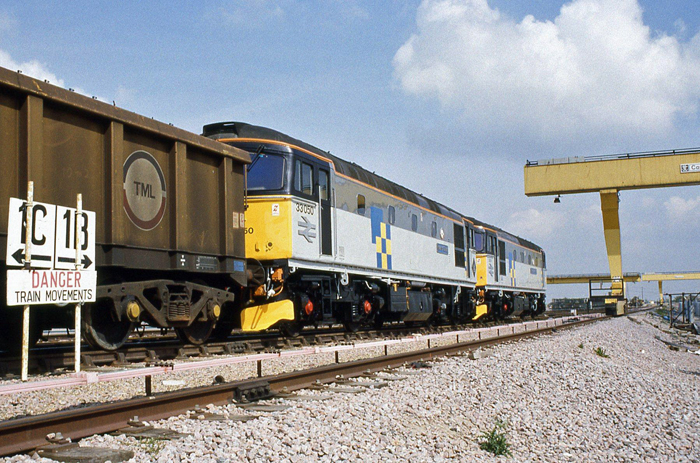 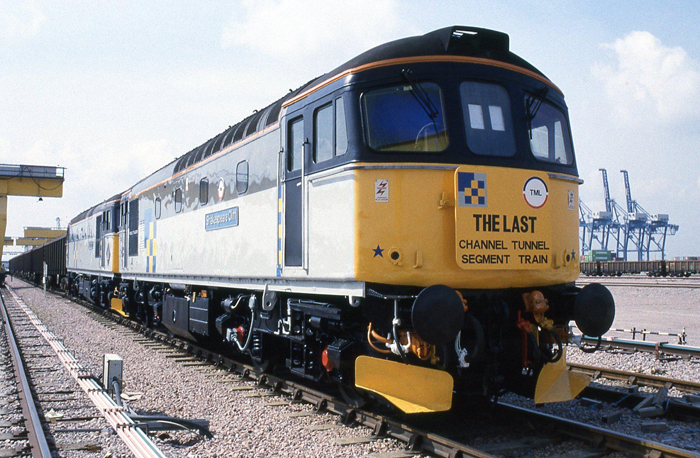 Class 33 Nos. 33051 "Shakespeare Cliff" and 33050 "Isle of Grain" stand with a rake of 8 loaded wagons prior to working the last full length (24 wagon) tunnel segment train to Shakespeare Cliff. The actual last train operated two days later on 17th May 1991 when the last few tunnel segments were cleared from the TML casting yard. © David Morgan