The Dover & Deal Joint Line was a collaborative effort between the SER and LC&DR, but only the architecture of the former seems to feature along the route. Walmer opened with the line on 15th June 1881 and the style here more or less replicated that at nearby Martin Mill, although there were of course a number of detail differences. The SER’s clapboard station policy was rife at the time, which is why the provision of brick structures at this station is somewhat unusual (indeed, there are other later anomalies, such as the 1890-opened Halling). Another peculiar feature was the presence of substantial – albeit single storey – buildings on both sides, rather than one platform being host to the typical small timber waiting shelter, this of which tended to be much more common at both company’s intermediate stations. Since the line was a joint venture, there was perhaps enough capital accumulated from both companies to fund stations which were somewhat more ‘’permanent’’ looking. The main station building here was situated on the ‘’down’’ side and built to the same style as that at Martin Mill, although it was considerably longer, and demonstrated a greater level of intricate detailing. The ‘’up’’ side building at Walmer was roughly half the size of the ‘’down’’ side structure and nearly double the length of its counterpart at Martin Mill – it is interesting that the opportunity to completely standardised the two stations was not taken. Subways were provided for passage between the two platforms, these featuring the typical SER brick-surround entrances and curved roofs, common features on the company’s North Kent Line. However, there was one platform canopy here which was unique. The ‘’down’’ structure was graced with an arched canopy complete with SER-designed valance (see Paddock Wood), but the ‘’up’’ side, despite acting as the ‘’secondary’’ facilities, was a little more special. The canopy here extended around three of the building’s elevations, providing the spectacle of the arched roof sections meeting each other at right angles.

To complete the general picture of Walmer being Martin Mill’s bigger brother, goods provision here was also more plentiful. A single-track shed was situated on the ‘’down’’ side, to the north of the platforms, and this was roughly twice the length of that at Martin Mill. An additional siding and a dock line, the latter terminating just behind the station platform, accompanied it. A further three sidings were also evident directly opposite, on the ‘’up’’ side, one of which was used by steam locomotives gaining access to a water crane. Lastly, the signal box here was of all timber construction, two storeys high, and situated at the end of the ‘’up’’ platform.

An all-electric timetable on the ‘’Joint Line’’ commenced on 18th June 1962, an occurrence which usually saw stations’ layouts degraded to the extreme. The goods yard at Walmer had in fact closed in October of the previous year, a month later than that at Martin Mill, but the signal box lasted a little longer, the cabin at Deal not taking over its functions until 29th November 1964. General decline of this station included the abolition of the ‘’up’’ side buildings and the removal of the curved roofs of the subway entrances – these were subsequently replaced with slanting equivalents. The main building was fortunate to retain its canopy and original valance (unlike its counterpart at Martin Mill), but the curved profile of the roof was changed, thus it now pitches. The customary concrete cast platform extensions appeared at the southern end of the layout at the time of electrification. 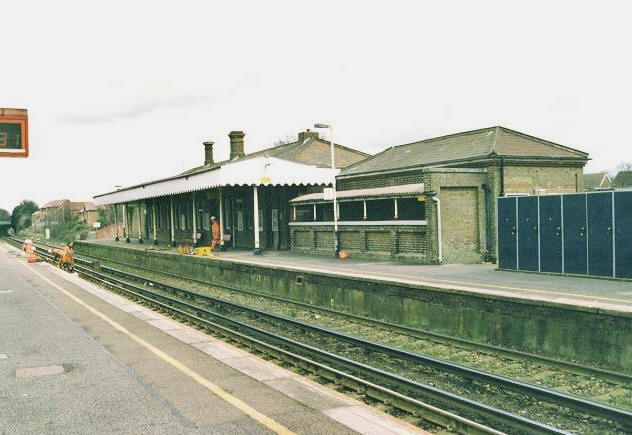 The remaining ''down'' side building is observed in this 12th February 2005 view, complete with canopy

(now with pitched roof) and subway entrance (now with slanting roof). There is a physical gap in-between 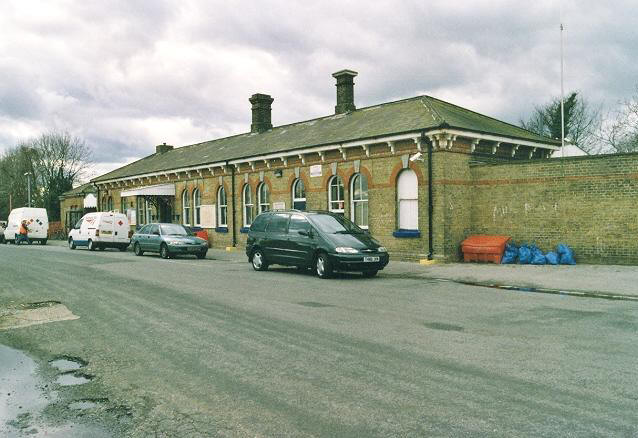 The façade of the main building is fairly elaborate and it features ornate brackets below the roof line,

a feature Martin Mill never acquired. What the latter did at one time have was the small canopy protecting

the building entrance, as seen in this 12th February 2005 view. David Glasspool 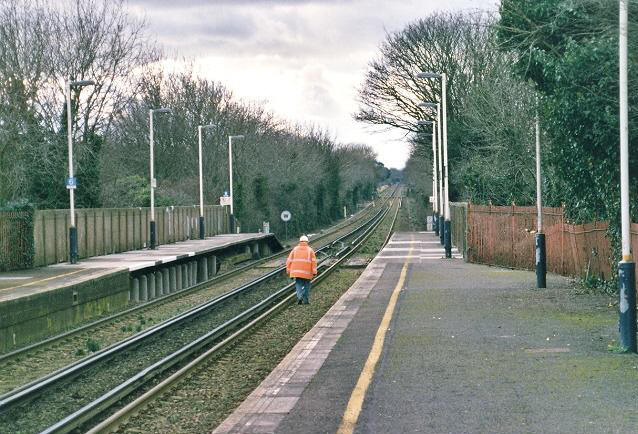 The concrete platform extensions are obvious in this southward view from 12th February 2005. The

red railings on the right are also of considerable vintage, having been present at the site from the outset

(although certainly not in that colour!). David Glasspool