The LC&DR’s Herne Bay to Ramsgate section of its North Kent Coast route to Thanet was opened to regular traffic on 5th October 1863, but this station came into use later than the line, during April 1871. By this time, Westgate-on-Sea had evolved into a sprawling suburb of the adjacent Victorian resort of Margate. Although the station was little more than an intermediate two-platform affair, the railway-related buildings here were nevertheless substantial. However, structural modesty was still evident: the ‘’down’’ side was host to a single-storey timber-clad ticket office. The constitution of this building was quite unusual, for it featured diagonally-laid wooden planks, and unlike the economical affairs of the SER, which were fully timber-built (Northfleet serving as a prime example), the structure demonstrated significant brick content. In fact, both western and eastern walls were wholly brick, as was the elevated stage the building resided upon. Conversely, the northern and southern elevations, complete with sash-style windows, were completely of wood construction. The ticket office was flanked on either side by a large two-storey yellow-brick pitched-roof building. That building immediately to the east of the ticket office was built upon the platform, whilst the structure to the west was slightly set back, to include a garden. Both buildings were virtually identical in design, being mirror-images of each other, and one of these quite imposing structures housed the Station Master. Indeed, it was common for such accommodation to include a garden – the Station Master’s residence at Shortlands retained such a luxury until about 1970, when car park expansion saw it abolished. This is not the first time the LC&DR network had witnessed single-storey timber and two-storey brick buildings side by side; exactly the same scenario had presented itself at Meopham some ten years earlier. Meopham was also a station which had opened later than the line it laid on.

The ‘’up’’ platform at Westgate received waiting accommodation which appeared, at least at first glance, to be more solidly-constructed than the ‘’down’’ side ticket office. One storey high and rectangular in cross-section, this yellow-brick structure was fully enclosed on all sides, and entry was by means of a door on its eastern elevation. It featured a gradually upward-sloping canopy, complete with an intricate valance which matched the design of its ‘’down’’ side counterpart. Both platform surfaces were linked by a track foot crossing from the outset. However, such arrangements were later challenged at many stations by the Board of Trade, and circa 1895, Westgate-on-Sea had a lattice footbridge installed. This came complete with a curved roof, and replicated the design of the contemporary example which had been erected at Farningham Road.

Goods facilities here eventually consisted of four sidings positioned to the east of the platforms. Of the pair on the ‘’down’’ side, one track terminated as an eastward-facing dock line, being about 180 yards in length. A head-shunt was required into this line for access to the siding which joined it, the latter stretching for a further 120 yards eastwards and coming into use circa the formation of the SE&CR. The combined length of 300 yards of this section of line ensured that a triple-track level crossing was in use some 200 yards east of the platforms, which protected the aforementioned siding and the two running lines. The ‘’up’’ side also boasted two sidings, each 50 and 100 yards respectively. These tracks were organised in a similar arrangement to those on the ‘’down’’ side, the 50 yard-long siding providing head-shunt access to its longer partner. The layout was controlled by a two-storey high signal cabin erected by well-known contractors Saxby & Farmer, this being positioned on the ‘’down’’ side, adjacent to the level crossing, having been erected circa 1880.

The station’s relative insignificance compared with its much larger counterpart at Margate ensured that it avoided modernisation under both SE&CR and Southern Railway auspices. Whilst the latter company installed its own style of gas lamps at Westgate-on-Sea, little else changed. Indeed, the station was outside of the SR’s Thanet modernisation zone of 1925/1926, which entailed major rebuilding at Margate and completely new stations at Dumpton Park and Ramsgate. However, that did not stop Herne Bay receiving an island platform during the same works. Like the majority of stations outside the London suburbs, noticeable changes did not occur at Westgate-on-Sea until the far-reaching Kent Coast Electrification Scheme was implemented. This began in 1958 with the decommissioning of a siding on both ‘’up’’ and ‘’down’’ sides, permitting considerable lengthening of both platforms at their eastern ends with Exmouth Junction-manufactured prefabricated concrete. Such work would allow the station to accommodate the twelve-vehicle electric formations which were soon to be introduced. This was followed on the 3rd May 1959 by the commissioning of three-aspect colour lights at the station, these still being controlled by the Saxby & Farmer signal box which, at this time, continued to protect a level crossing. Introduction of coloured lights on this date had covered stations eastward from Faversham, Westgate-on-Sea being the eastern limit. Colour-aspect lights between here and Margate were not commissioned until 19th July of the same year.

Despite the aforementioned 1958 decommissioning of a pair of sidings to allow for platform lengthening, the station continued to handle freight traffic until 6th November 1961. Track simplification was not met by similar economies at platform level, and all major structures of 1871 vintage remained standing. Only the Saxby & Farmer cabin was lost when, in June 1972, the 1913-built Margate (West) signal box assumed its functions. By this time there was no level crossing left to operate, this having already been superseded by a footbridge and the road consequently terminated. As for the station itself, circa 1985 the lattice footbridge lost its corrugated metal curved roof, and the ‘’up’’ side waiting accommodation later had all its windows boarded up, a practice implemented to protect against vandalism. Nevertheless, in review, all original platform structures of 1871 vintage remain intact, putting the station third between Herne Bay (main ‘’down’’ side building) and Birchington-on-Sea as the structurally oldest site between Teynham and Ramsgate inclusive. 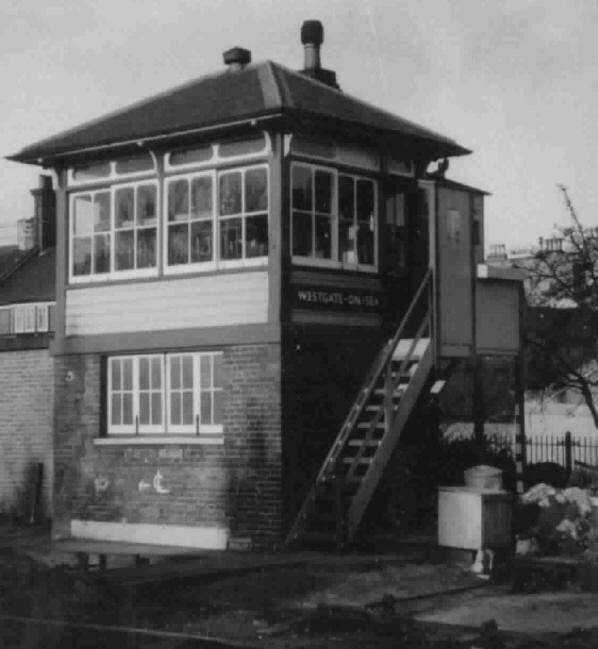 Westgate-on-Sea was host to an attractive signal box, built by outside contractor Saxby & Farmer.

It was positioned beyond the eastern end of the ''down'' platform, and was of a design which was

once common along the ''Chatham'' main line. The above view dates from December 1962 and

also includes, on the left, the signal box's relay room. This was commissioned at the time of the

1959 re-signalling, and allowed the existing signal box to continue its control of the sidings. 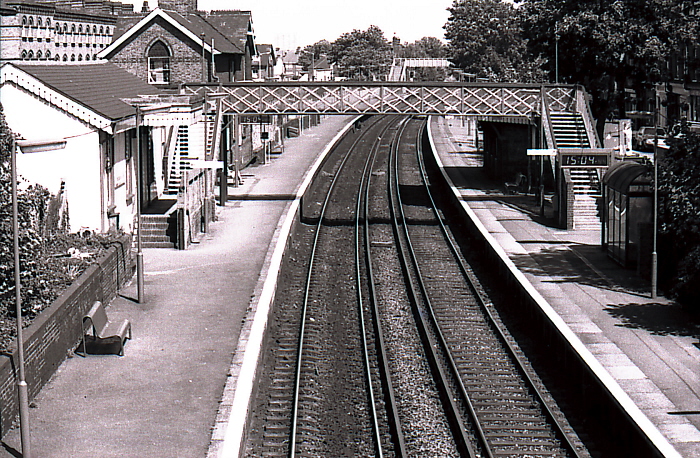 An eastward view from 1989 reveals that all important station structures remain in existence. On the right can

be seen the digital clock display and curved bus shelter installed by Network SouthEast, whilst in the background

is the footbridge which replaced the level crossing. John Horton 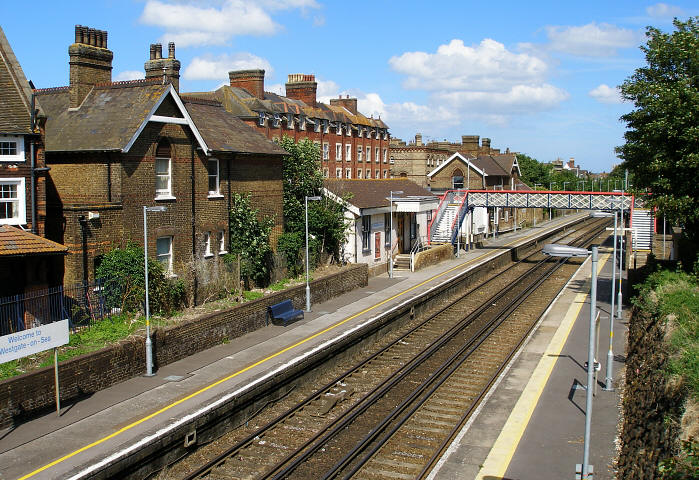 An eastward view from 20th June 2007 reveals the two large station houses on the ''down'' platform, with the

has changed since 1989. David Glasspool