This is a fleet of four diesel-powered Multi-Purpose Vehicles (MPV) which were procured specifically for the maintenance of the overhead catenary on High Speed 1 (HS1). The vehicles were built by German firm "Windhoff", which specialises in producing rail plant machinery, and are based on that firm's "CargoSprinter" platform. The latter was developed in 1996 and created what was essentially a self-propelled flatbed wagon, with added driving cab, upon which could be loaded 60 tonnes of equipment. The "CargoSprinter" concept originally sought to make freight by rail more attractive, whereby the transportation of small loads door-to-door could become economically viable, compared to traditional locomotive haulage. The concept negated the requirement of locomotive shunting, and automatic couplers streamlined the process of lengthening/dividing formations.

The MPVs for HS1 arrived at Dollands Moor from the continent in April 2005, after being hauled through the Channel Tunnel, and are numbered 97011 to 97014. They are a development of those MPVs originally ordered from Windhoff by "Railtrack" in 1998, these of which comprise a "master" vehicle equipped with a pair of 265 kW Volvo Penta diesel engines, and an unpowered "slave". However, those for HS1, although working in pairs, are all engined "master" units, thus offer greater power over the first batch supplied to Railtrack.

Track possessions for maintenance work on HS1 take place at night, during which a three to four hour window is made available when scheduled services are not running (typically, an extended period is offered on Saturday nights). During the day, the MPVs are generally stabled at either Dollands Moor or Singlewell Infrastructure Maintenance Depot. The renewal and maintenance of infrastructure for HS1 is undertaken by Network Rail (High Speed) Ltd, which is contracted to provide this service until at least 2025. 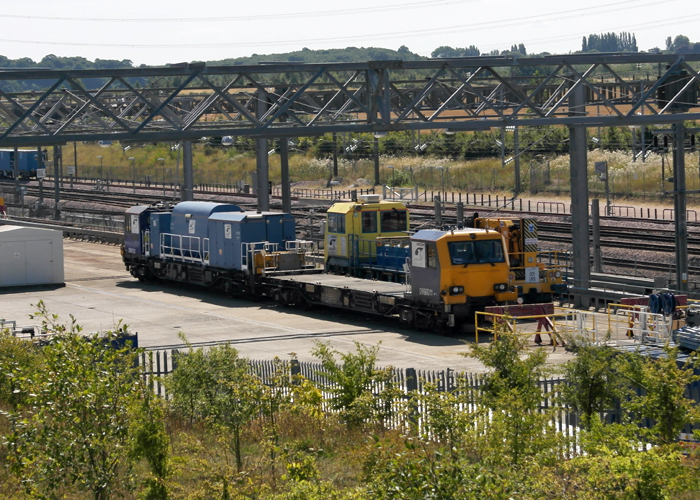 Coupled together, Nos. DR97011 and DR97012, right and left respectively, are seen stabled in the yard at Singlewell Infrastructure Maintenance Depot (IMD). The engines are located underneath the chassis. The vehicles are operated by "Network Rail (High Speed) Ltd", which has the contract to renew and maintain the infrastructure on HS1. © David Glasspool