A line branching northwards at Paddock Wood was authorised by Parliament in 1843 to run parallel with the course of the River Medway and terminate at Maidstone (West). This became the South Eastern Railway's first branch line, Yalding opening with it on 25th September 1844. Throughout this website, visitors will probably become aware of several references to the SER's policy of providing ''economical'' stations at a ''modest cost'' - in the truest sense, this meant that clapboard structures were used throughout. However, Yalding was perhaps an astonishing case of economy taken to the extreme, for there were no recognisable railway structures in sight; the location was merely a stop-off point and passengers had to make do with wooden planks when getting on and off trains! This arrangement was, however, temporary and soon the typical SER architecture began to emerge in 1846, when the line was doubled: staggered brick platforms (their height low by today's standards), a ''down'' side clapboard building (devoid of canopy), an ''up'' side timber waiting shelter and a brick-built goods shed, this on the ''down'' side, accommodating two lines - this was an uncommon feature. A diminutive dock line was also an interesting feature of this station, featuring on the ''up'' side, directly opposite the main station building; in later years this was host to a Pullman camping coach. Although the goods shed was unusual, the timber waiting shelter was at least conforming with other such SER station structures, having been built lacking a canopy valance, this feature not arriving until after the formation of the SE&CR. A small timber signal cabin was erected, sandwiched in-between the clapboard station building and level crossing. Like many early stations, no footbridge was provided, the two platforms instead being linked by a track crossing. A Station Master's house was also in the vicinity, but unusually was in isolation from the platforms, being some 400 foot from the main station building.

The Medway Valley Line became a through route when a connection with the North Kent Line at Strood was opened on 18th June 1856 - it is possibly around this date that the aforementioned structures were commissioned at Yalding. The clapboard arrangement survived for nearly fifty years, its existence curtailed only by the outbreak of a fire in 1893. As one would expect, only the brick-built chimney stacks and goods shed were left standing: the Station Master's isolation also transpired to be advantageous in light of this occurrence (the shelter on the ''up'' platform also escaped destruction). New buildings were completed on the site the following year and evidently the SER was to take no further risk with clapboard here, the replacement building being of much more solid brick construction. Its general shape did, however, follow the lines of its predecessor, but this similarity could not be applied to the 27-lever signal box of 1894; this was a far cry from the signal hut of the old station, the replacement being of Saxby & Farmer design. Provision of a new signal box had also heralded the re-signalling of the general layout, but perhaps the two other more significant additions were to the platforms. The track crossing between the staggered arrangement was superseded by a lattice footbridge in 1895 and the platforms themselves received extra layers of bricks during heightening work. The original ''up'' shelter had also received a new canopy valance.

Being situated on the original half of the Medway Valley Line, south of Maidstone, the station escaped the electrification of July 1939, which saw third rail extended from Gravesend to Maidstone West. Instead, a push-pull service was put into operation between Maidstone and Paddock Wood, usually utilising an ex-SE&CR ''H'' Class with a pair of Maunsell-designed carriages (the rolling stock switched to pre-Grouping motor coaches from 1959 onwards, these still being steam-hauled). However, this service was replaced with electric traction on 12th June 1961 as the third rail extension from Maidstone to Paddock Wood became ''live''. The goods yard ceased to function on 27th May 1963, but the station retained one freight-dedicated siding - that belonging to ''Plant Protection Limited'' (a concern which was involved in developing pesticides for crops, latterly a wholly-owned subsidiary of chemical giant ICI), which had been laid circa 1950. This itself was closed on New Year's Eve 1970, followed in June 1986 by the signal box, which was superseded by automatic lifting barriers. 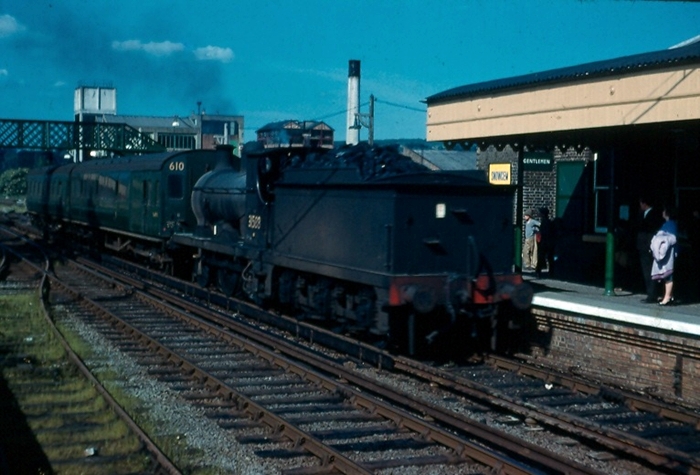 In the bottom left-hand corner can be seen the short ''up'' dock line, nature gradually taking over again. The

goods yard is hidden behind Maunsell push-pull set No. 610. Conductor rails are in place: commencement of

the new electric service is less than a month away. © David Glasspool Collection 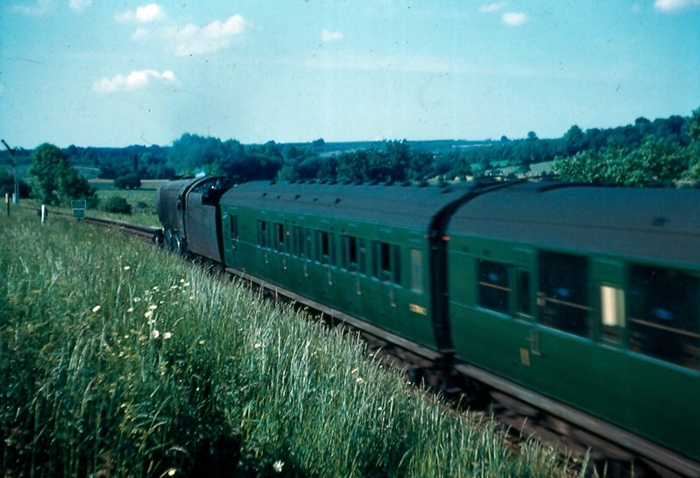 Maunsell carriages in tow, a Bulleid Q1 is seen departing Yalding, Maidstone West-bound. In the year of Phase

1 of the Kent Coast Electrification going ''live'', there were fourteen ''Coffee Pots'' allocated to the South Eastern

Division: four were based at Hither Green, the rest at Tonbridge. © David Glasspool Collection 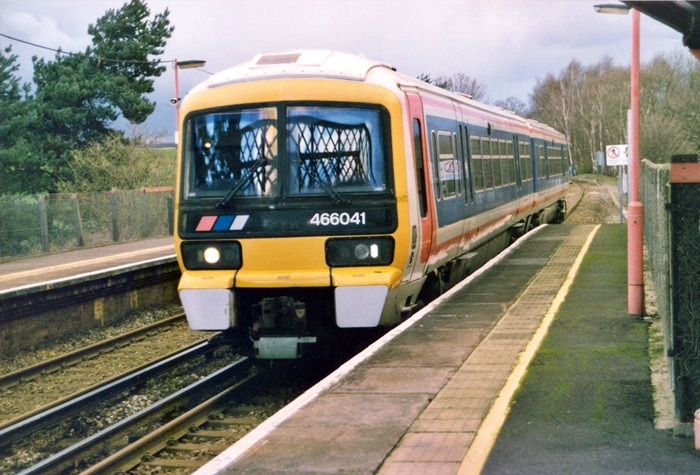 We now move onto electric motive power. Up until 1997, 4 CEP formations could usually be found on the Strood

to Paddock Wood Line, but thereafter ex-Merseyrail Class 508 units were drafted in to work the services. On this