Of the four main routes of the Channel Tunnel Rail Link proposed between 1987 and 1991, all passed through Ashford. The latter was a strategic point on the Kent railway network: lines from Thanet, Dover, Tonbridge, Maidstone, and Hastings all converged there. When, in 1987, it was proposed to build an international station at Ashford on the CTRL, the idea was quickly ruled out by the then Secretary of State for Transport, Paul Channon. Three years later, political pressure brought Ashford International back on the agenda, as part of the Trafalgar House CTRL route through South London to Kings Cross. In January 1991, British Rail formally submitted proposals to the Government for an Ashford International station. In October of the same year, it was proposed to build a revised CTRL put forward by structural engineering firm ''Ove Arup & Partners'', which took a course through East London and would transpire to be far less destructive than the South London alternative. Nevertheless, the Ashford International scheme remained under Government consideration. To set the ball rolling, March 1991 saw construction begin on a 415-space car park.

The initial British Rail plans outlined an international site completely separate from the existing Ashford station. In July 1991, this was debated by Parliament as part of the ''British Railways (No. 3) Bill'', which was seen as a follow-on from the Channel Tunnel Act of 1987. The Bill aimed to construct an international station at Ashford, install a trio of freight loops, upgrade Bickley Junction, and lay the West Hampstead Chord in North London. The loops in question were to be installed at Borough Green, Headcorn, and Otford, and would allow slow freight trains to clear the path for both domestic and international passenger services. Ashford International station was to be part of a much wider development, which would attract considerable investment and allow French firms and citizens to capitalise on Britain's lower taxes and less draconian employment legislation. As part of the same project, the former Ashford Works buildings of the SER were to be razed to the ground and their sites wholly redeveloped. It was initially claimed that no structures of 1847 vintage, when the SER moved its locomotive works to here from New Cross, survived, but further inspection proved that the main nucleus of the complex was indeed from this date. The 1847 structures became protected buildings, but later additions made at the turn of the 20th Century were still bulldozed.

Between Ashford and London it was hoped to cut journey times by almost half, on completion of the CTRL. An international station at Ashford would also eliminate the need for Kent residents to make a circuitous trip via London to travel to the continent. The construction budget was tight and in November 1991, the Secretary of State for Transport, Malcolm Rifkind, asked British Rail's Chairman, Sir Bob Reid, to consider a simpler, hence cheaper, version of the Ashford International proposed. At this time, only £18 million had been allocated to the station project. British Rail completed its preliminary studies for a revised Ashford International in March 1992, and the Government favoured the option of integrating the site with the existing domestic station. On 22nd March 1993, the then Secretary of State for Transport, John MacGregor, gave the green light for the construction of the international station. £30 million had been secured for immediate permanent way works in the form of track re-laying, re-signalling, and platform construction, but at the time, no such money was available for any station buildings. For the design and funding of the latter, the Government was keen to involve the private sector. It was expected that track and platform works would be put out to tender in July 1993, and previously in June, British Rail invited private sector parties to express interest in building Ashford International. Permanent way alterations began on 20th October 1993, and it was hoped that the station would be ready for use within two years.

Bids for constructing the station buildings and car parks were received by British Rail in November 1993. On 16th December of that year, the Transport Secretary announced that the construction of Ashford International station was to go ahead as a privately-financed project. European Passenger Services, a British Rail division responsible for ''Eurostar'' and ''Nightstar'' operations, signed a contract with ''John Laing PLC'' for the latter to build and finance the station structures and car parks at its own risk. Thus, John Laing PLC would own the new station and in return, receive a payment from EPS for each passenger which used it. In 1994, it was expected that a third of all international services using the CTRL would stop at Ashford by the turn of the century. This was at a time when the entire CTRL had been forecast for completion in 2002. Connecting the proposed CTRL with the existing Tonbridge line at a junction to the west of Ashford was said to be Government policy, and the link would be used by both fast international and domestic trains.

The existing layout at Ashford dated from Phase 2 of the Kent Coast Electrification Scheme, when a station rebuilding was undertaken, completion coming in 1966. Four platform faces were in use, formed of two islands separated by four tracks, and a large glazed footbridge - complete with ticket booths - existed at the London end of the layout. The platform canopy frameworks remained of SE&CR origin, but had been clad with asbestos as part of the electrification works. Platforms were numbered 1 to 4 south to north. The Chunnel scheme aimed to extend the station site northwards, to accommodate a third island platform. The original platform Nos. 3 and 4 were to be rebuilt for the international services, whilst their loss to domestic trains would be compensated by the new island, platform Nos. 5 and 6. It was stressed by the Government in January 1995 that the design of Ashford International would take into account the first generation of rolling stock only, the Trans Manche Super Trains, and in the future, adjustments would have to be made to infrastructure to accommodate larger European formations. 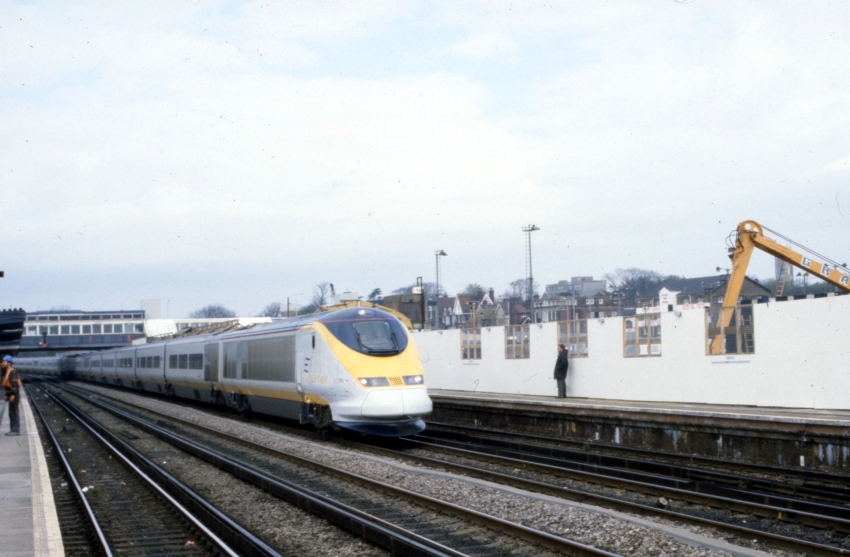 Demolition of existing structures on platform Nos. 3 and 4 is well underway as Class 373 No. 3102 passes through on a test run, Chunnel-bound. The footbridge in the background dated from the rebuilding works in connection with the Kent Coast Electrification Scheme and was eventually removed. © David Glasspool Collection 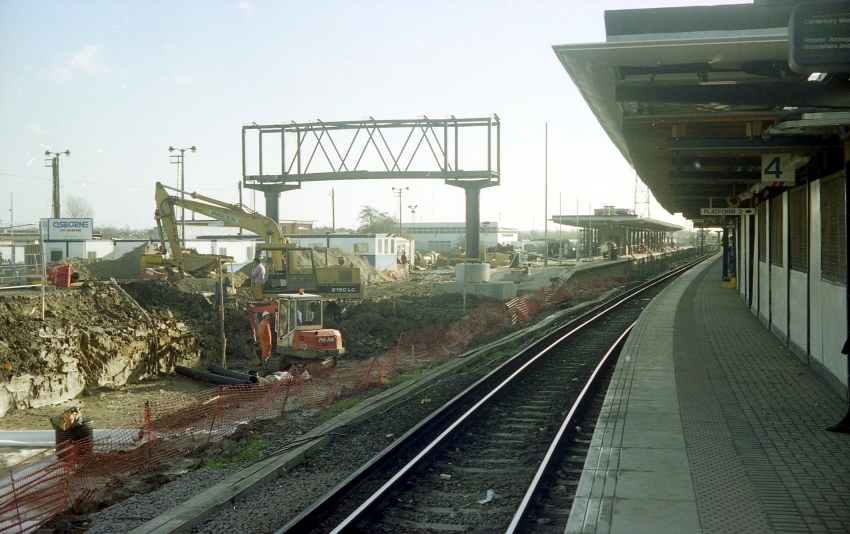 A south eastward view from platform 4, looking in the Folkestone direction, shows the initial framework of the enclosed staff footbridge, which eventually linked platform Nos. 5 and 6 with a car park on the north eastern side of the station. Beyond the footbridge span, to the right, is the island forming platform Nos. 5 and 6, whilst the grey block with black windows in the background is Ashford IECC. The Network SouthEast platform 4 number signs affixed to the new canopy were short-lived, for this island became dedicated to Eurostar services. © David Glasspool Collection 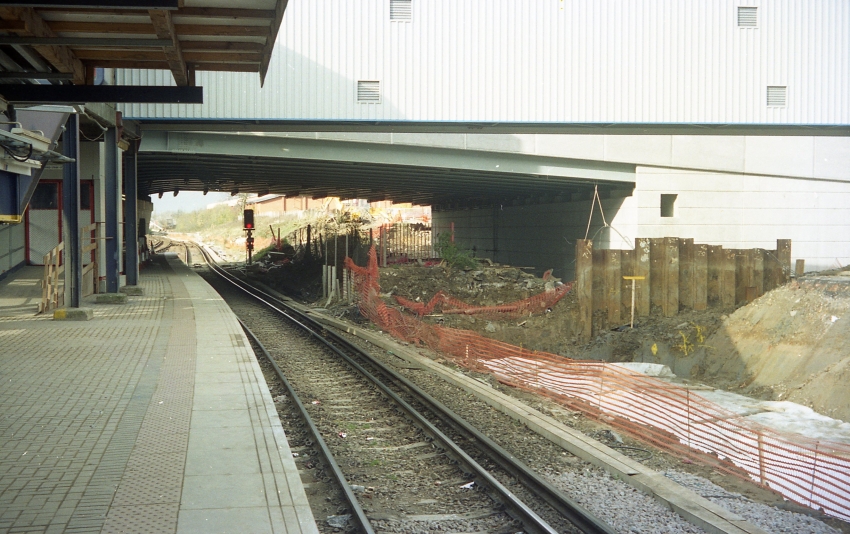 The mounds of earth on the right of this London-bound view from platform 4 would eventually make way for the tracks serving platform Nos. 5 and 6. The windowless footbridge span was temporary for the duration of the station's rebuilding and replaced a glazed equivalent which dated from the Kent Coast Electrification Scheme. © David Glasspool Collection 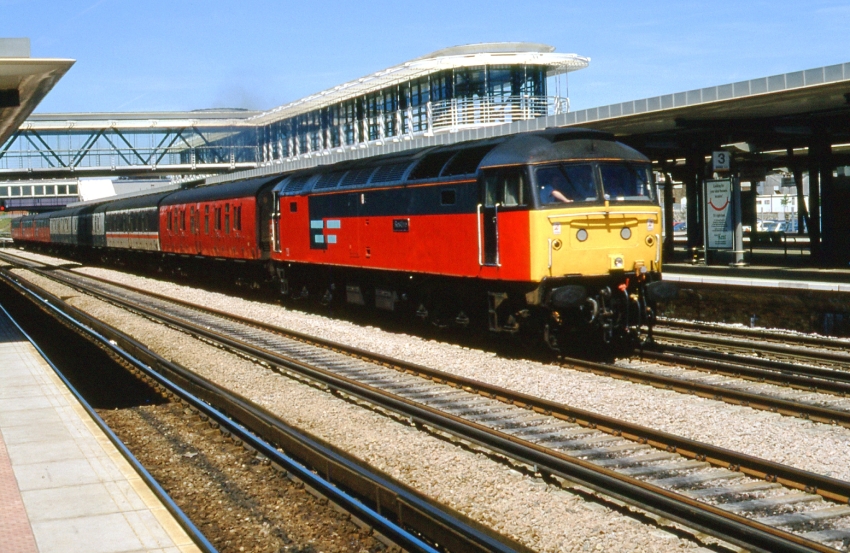 Just over five months had passed since the first "Eurostar" service had called at the re-christened "Ashford International". On the "down" through line between platform Nos. 2 and 3 is Class 47 No. 47475 "Restive", which was wearing the colours of British Rail sector "Rail Express Systems" (RES). RES handled parcels traffic and Queen Elizabeth II's Royal Train, and US-based "Wisconsin Central Railway" bought a one-third stake in the sector in December 1995. All parcels vehicles in the above photograph are of the BR Mk 1 profile, the liveries on display being Royal Mail Red, InterCity "Executive", British Rail Blue/Grey and, finally, RES Black and Red. Note the footbridge in the distance, which dated from the 1960s station rebuilding - this span was later taken down. © David Glasspool Collection