Platform Nos. 3 and 4 had to be rebuilt to completely different specifications compared to the domestic islands. The sheer length of the Eurostar formations necessitated the completion of an island 1330-feet long, protected by a 960-feet-long canopy. Since these trains had also been designed with European platforms in mind, the island had to be built to a lower height than standard British Rail surfaces; exactly the same occurred at Waterloo International and, latterly, St Pancras, Stratford International and Ebbsfleet International stations. The new platform Nos. 5 and 6 extended for about 880-feet and were protected by a canopy 310-feet in length. At their western ends they were linked by an enclosed footbridge, about 110-feet long, to one of five main car parks surrounding the site, which collectively had 3000 spaces. 2000 of these spaces were for international passengers, the rest for domestic travellers. Passengers, however, would make use of a subway linking both domestic island platforms with a new glazed station building on the north side of the layout. Platform Nos. 1 and 2 formed an 810-foot island protected by a 500-foot-long canopy, and to its south a single-track separated it from the main ''international'' station building. The latter was a glass colossus two-storeys high, 445-feet by 120-foot at its base, which on the ground floor accommodated immigration and arrivals halls, and ticket offices. The first floor hosted a departure lounge for 800 passengers, the latter of which had shops and a cafe at their disposal. This building was linked to platform Nos. 2 and 3 by a 130-foot-long footbridge, which on this island met another station structure of similar design, also of two-storeys, but with the smaller dimensions 220-feet by 25-feet. Platform line Nos. 3, 4, 5, and 6 were electrified with 750 Volts DC third rail and 25kV overhead wires; platform line Nos. 1 and 2 were equipped with third rail only. Ashford International saw its first Eurostar services on Monday 8th January 1996, more than a year after such trains had started running between Waterloo and Paris Gare du Nord.

Construction of the CTRL's ''Section 1'' commenced in October 1998, and in the previous month, ''Kværner Construction'' was awarded Contract 430. This, the most complex of 45 contracts put out for tender, was worth £150 million and involved building all CTRL infrastructure works within the Ashford area. The contract covered a distance of 15.2 km (9.4 miles) between Lenham Heath and Sevington, the latter on Ashford's south eastern peripheral, and involved building two flying junctions, a series of cut-and-cover tunnels, and a 1.6 km station avoiding viaduct. The viaduct would run parallel with the northern perimeter of the international station and carry the CTRL tracks over the diverging Thanet via Canterbury West route. On 23rd December 1998, ''Westinghouse Signals'' was awarded a £6 million contract to re-signal the international layout, to incorporate connections with the CTRL at the northern and southern ends of the station. A second £6 million contract was awarded on 26th April of the following year to ''John Mowlem PLC'' to carry out track alterations as part of the same scheme.

The first of the tunnels was located northwest of the international station. Immediately before entering the bore from the north, the CTRL widened from two to four tracks. This tunnel is of some note, for it incorporates a grade separated layout whereby the two centre tracks of the quadruple formation descend to a lower level than the outer lines. The latter emerge from the tunnel after about 620-yards, passing under three roads and the Maidstone East route. The centre tracks remain at a lower level, and briefly see daylight for about 50-yards, before plunging into another wholly enclosed section, 460-yards in length. This takes them underneath the aforementioned outer tracks (these of which join the domestic lines at a level junction) and on to the avoiding viaduct. To the southeast of the station, a new junction was provided on the level between domestic and CTRL tracks, beyond the diverging Canterbury route. A flying junction was also made to permit this double-track spur to re-join the two lines of the avoiding viaduct. To aid construction, a temporary railway yard, known as ''Beeckbrook Farm'', came into use 1.5 miles south of the station. This involved laying nine miles worth of new sidings to stable works trains.

Section 1 of the CTRL opened to regular traffic on 28th September 2003, reducing London to Chunnel portal journey times by twenty minutes. For Ashford passengers, the Channel Tunnel was thirteen miles down the line, just ten minutes away. Whilst the CTRL's Section 1 provided Ashford with fast, direct services to Paris and Brussels, Section 2 of the line would sour the situation. In September 2006, it was announced that Ashford International would lose all its existing services to and from Brussels when operation from St Pancras commenced in the following year. In addition, Paris services would be more than halved, seemingly as a prelude to total closure, and Ebbsfleet International was to assume the role as Kent's main intermediate CTRL station. This was part of a cost-cutting regime implemented by parent company ''London & Continental Railways'', which had been tackling lower than forecasted passenger numbers ever since taking over the Eurostar operation in 1996, and included the closure of Waterloo International. 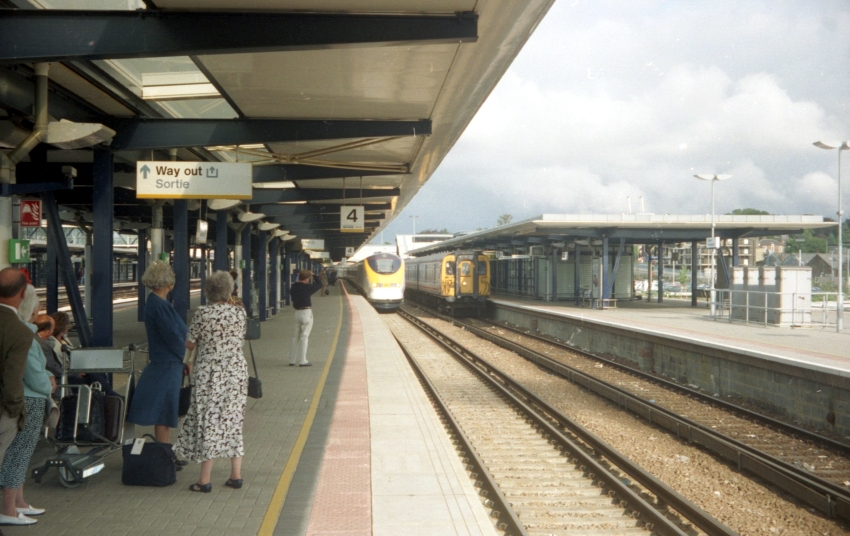 A 4 CEP is seen arriving at platform 5 with a Charing Cross to Margate via Canterbury West service, whilst a Class 373 Trans Manche Super Train arrives at platform 4 with a Continent-bound working. © David Glasspool Collection 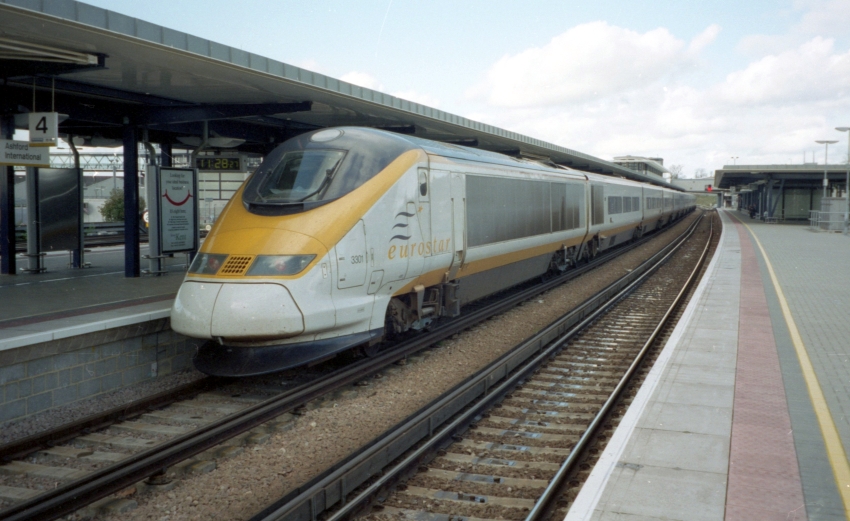 "Regional" Eurostar half set No. 3301, pairing with half set No. 3302, is seen on a test run at Ashford International. Fourteen of these half sets were manufactured to operate on "North of London" international services, calling at British provincial cities, going as far north as Glasgow and Edinburgh. These services never ran and, eventually, No. 3301 found itself deployed on the East Coast Main Line between Kings Cross and Leeds from summer 2000. © David Glasspool Collection 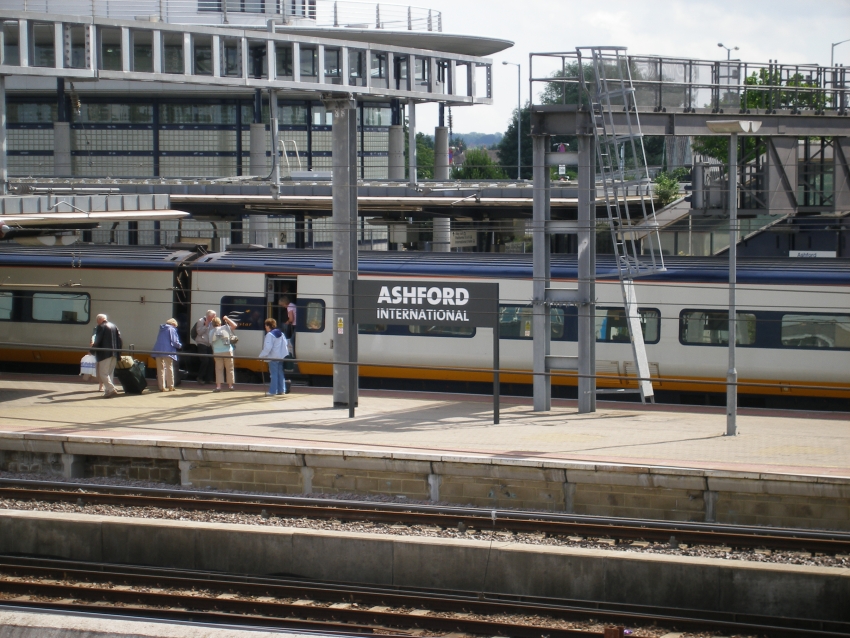 A sea of masts and electrified wire present themselves to disembarking passengers, at a time when Eurostar services to and from this station were under threat. On the right, behind the carriages, can just be seen the only remaining structure from the previous station: a footbridge staircase. © David Glasspool 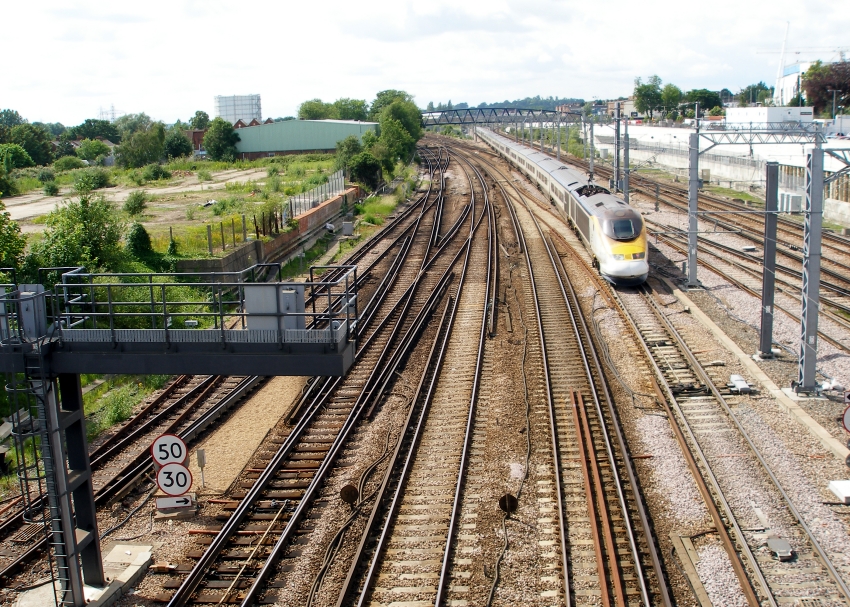 A London-bound view shows the Class 373 formation, seen in the previous photograph, re-joining the CTRL lines. Before it merges again with the double-track from the avoiding viaduct, the route will first plunge into 620-yard-long grade separated tunnel. © David Glasspool