Camberwell was an early casualty of the ex-SE&CR network. It joins a list of numerous station sites which were closed to traffic in response to economy measures enacted during World War I. Many of these sites were never reopened by the Joint Managing Committee: Spa Road, Deptford, and stations along the Greenwich Park branch serve as prime examples. Deptford was later given a reprieve, being reopened by the Southern Railway in conjunction with the 1926 electrification of the North Kent routes – Camberwell was not so lucky.

Camberwell came into use with the Herne Hill to Elephant & Castle section of the LC&DR’s ‘’Metropolitan Extension’’ on 6th October 1862. The line was initially double-track and an extension to a ‘’Blackfriars’’ station on the South Bank of the Thames was made in 1864, passenger traffic commencing on 1st June of that year. By this time, Camberwell had acquired the suffix ‘’New Road’’. From 21st December 1864, trains were able to cross the river, terminating at temporary accommodation on the river’s northern bank. Opening of a permanent station at Ludgate Hill occurred on 1st June 1865. Between Ludgate Hill and Blackfriars (inclusive), four tracks were provided, but beyond, double-track working was in evidence. During 1866, widening took place between Blackfriars and Loughborough Junction (where, at the time, there were only platforms on the Brixton spur, named ‘’Brixton Road’’) to facilitate four-track working. The number of platforms at Elephant & Castle and Camberwell New Road increased from two to four. Similar works also took place at Borough Road and Walworth Road stations, located north and south of Elephant & Castle respectively. Like Camberwell New Road, these were fairly short-lived affairs which did not last beyond SE&CR ownership. As a result of the 1866 works, four platform faces came into use at Camberwell New Road, arranged in the form of two side surfaces and a centrally-located island. The latter measured a sizeable 580-feet in length, whilst ‘’up’’ and ‘’down’’ side platforms both extended for about 355-feet. Platforms were linked together through the below viaduct arches, and protection from the elements was copious, the island alone boasting a 290-foot-long canopy. ‘’Up’’ and ‘’down’’ side platforms comprised canopies 175-feet and 290-feet-long respectively. The main building could be found on the eastern side of the layout, rising up three storeys from the below road. The architecture was familiar, being a near carbon copy of the main building which came into use on Elephant & Castle’s ‘’down’’ side in the same year. Crème/yellow brick was used throughout in the building’s construction, and the walls featured the LC&DR’s trademark orange-lined semi-circular windows (these are still features of nearby Elephant & Castle and Herne Hill stations today).

Amazingly, the elevated nature of the station did not prevent a goods yard emerging. Destined to outlast the station by several decades, this could be found behind the ‘’up’’ side platform, comprising two short sidings fed by a lengthy single-track spur. A substantial goods shed was located at the Herne Hill end of the yard, but this lacked a rail connection (refer to diagram for details). The layout was controlled by an attractive two-storey-high signal cabin, located at the Blackfriars end of the island platform, and this was built to the LC&DR’s own in-house design – in fact, the cabin was virtually a mirror image of the signal box which still survives at Shepherds Well. The 25-lever cabin came into use circa 1885/1886, replacing the existing primitive signalling concurrent with a new terminus opening on the north side of the Thames at St Paul’s.

World War I economy measures put paid to the existence of many stations in the London suburbs. Closure of Camberwell to passenger traffic came on 3rd April 1916 – the ‘’New Road’’ suffix had been dropped eight years previously. Despite a comparatively short life, the station remained in a fairly complete state beyond closure. The attractive LC&DR cabin continued to control the lines here, and platforms were left to decay in a similar fashion to those at Spa Road, on the ex-SER approaches to London Bridge, which itself closed in 1915. Unfortunately, the main station building on the ‘’down’’ side appears to have later seen its top floor demolished, bringing the height of the building in line with the adjacent viaduct. It is probable that this occurred during World War II bombing raids, Camberwell being hit particularly badly by enemy action during this period. Goods traffic continued to be handled at the site long after station closure: it was the only SE&CR-owned goods yard located between Blackfriars and Herne Hill. The yard formally closed to goods traffic on 18th April 1964; goods facilities remained at Herne Hill until 1st August 1966. Camberwell signal box soldiered on until 15th February 1970 – it controlled semaphore signals to the very end.Camberwell New Road: Layout 1900 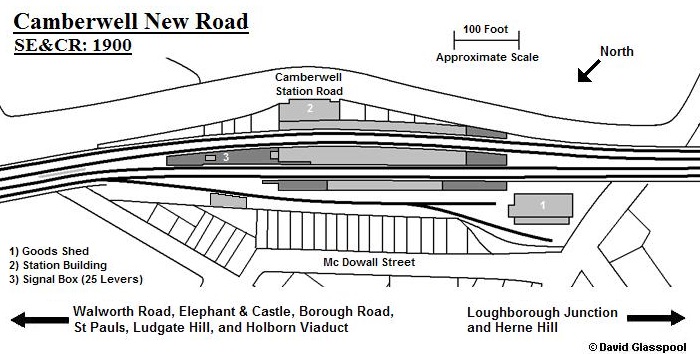 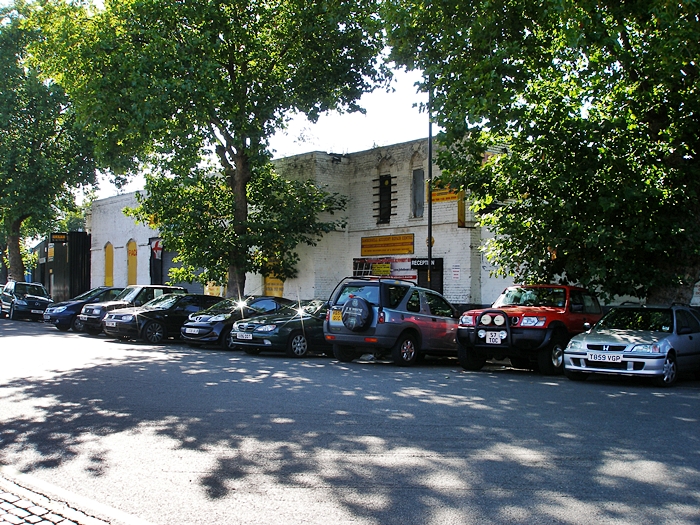 Planned demolition or bomb damage? Long closed, but still standing, Camberwell's station building remains in existence, although is devoid of its top floor. The trademark LC&DR arched window frames can still be deciphered through the whitewash finish. © David Glasspool 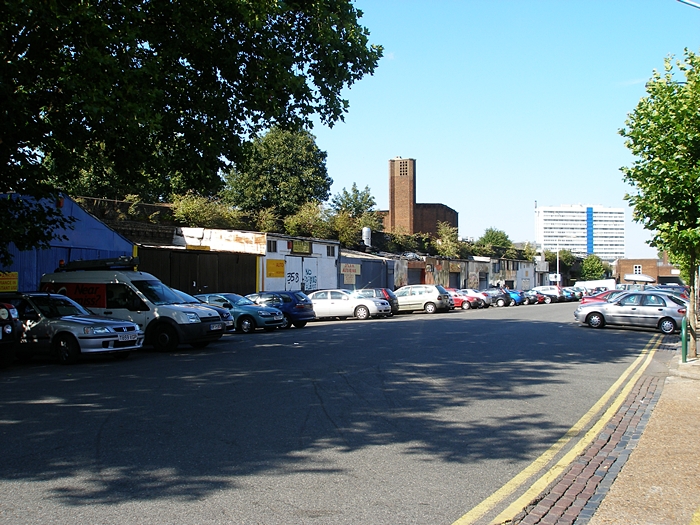 Panning round to the right from the previous view, the viaduct which carries the line to the South Bank of the Thames is hidden behind a hotchpotch of business units. © David Glasspool