Of those stations which originally opened with the Yeovil to Exeter section of the LSWR’s main line to the south west, both Chard Junction and Sutton Bingham could be considered ‘’non-standard’’. Both sites opened with single-storey main buildings which seemed to lack the grandeur of the two-storey-high Gothic affairs which came into use at neighbouring Crewkerne and Axminster (to name but two). For much of their existence, the main buildings at these sites were coated in a layer of crème paint, hiding all detail of their construction. Nevertheless, both Sutton Bingham and Chard Junction were products of architect Sir William Tite, and were host to design traits which could be found in abundance along this section of route.

The LSWR opened ‘’Chard Road’’ with the single-track Exeter extension of the original ‘’Salisbury & Yeovil Railway’’ on 19th July 1860, and the station was located 2½-miles south of the town it purported to serve. Two platforms, constituted of local stone, came into use either side of a passing loop formation. The main building here was positioned on the ‘’up’’ side; as earlier mentioned, this was a single-storey affair, the main part of which was constituted of a trio of gabled pitched roof sections facing end-on to the platform surface. The structure was of red brick construction, stone being used for lining all edges and window frames, and was essentially a scaled down version of those buildings found elsewhere along the route. Extending from its southern elevation was a 65-foot-long flat-roofed canopy, supported upon five cast-iron struts, which demonstrated another quintessential feature of the route: an irregular saw-tooth patterned valance. Upon the ‘’down’’ platform could be found an attractive enclosed waiting shelter of tongue-and-groove timber construction, which was a familiar sight along the line. As mentioned elsewhere on the website, this design featured twin gabled pitched-roof sections flanking a central section with a forward-sloping roof. In-between Yeovil and Exeter, only Sutton Bingham lacked a waiting shelter of this design, and not all were of wooden construction – a number, such as those at Sidmouth Junction and Whimple, were fabricated from red brick. An oddity of Chard Road’s 40-foot-long waiting shelter was the fact that it sprouted a platform canopy, identical to that of the ‘’up’’ side – no other shelter along the route had such a feature.

Goods facilities have yet to be mentioned, but first we shall turn our attention towards double-track working and the branch to Chard. The entire route became a double-track affair in July 1870, but two-tracks had earlier been commissioned between Crewkerne and Chard Road on 1st February 1862. Previously, on 25th May 1860, the ‘’Chard Railway Company’’ had been incorporated to construct a single-track branch, 3-miles and 5-chains in length, between the LSWR’s Chard Road station and the town of Chard. The company was authorised to raise a share capital of £25,000, with the option of borrowing an additional £8,300, and it was proposed that the line would be worked by the LSWR from the outset. The branch came into use on 8th May 1863 and peculiarly, terminated at a separate platform surface isolated from the rest of the station. This had been built opposite the northern façade of the ’’up’’ side main building. The branch had an indirect connection with the main line via a headshunt into the platform line, and terminating trains did not have the benefit of a run-a-round loop.

Goods facilities at the site were fairly modest, and comprised four sidings at the Exeter end of the layout: two on the ‘’up’’ side and a pair on the ‘’down’’ side. On the ‘’up’’ side of the station could be found a 70-foot-long red-brick goods shed, from which a flat-roofed canopy extended from its northern elevation. This was a through affair and the single-track which passed through it immediately terminated at a wagon turntable. Sandwiched in-between the goods shed track and ‘’up’’ running line was a ‘’dock’’ line, which terminated behind the western end of the platform at a set of cattle pens. The layout was controlled by an attractive LSWR-designed signal box, positioned at the Yeovil end of the ‘’up’’ platform. Of clapboard construction with a slated hipped roof, and set upon a base fabricated from local stone, this came into use beside the station’s level crossing circa 1875.

The station was named ‘’Chard Junction’’ from August 1872 onwards, and around the turn of the century, the LSWR began making improvements to the site. By 1903, an enclosed footbridge of lattice construction, complete with glazing, had been erected between the platforms. In addition, the ‘’up’’ platform had been extended at its Exeter end with brick, and the branch line terminus had acquired a run-a-round loop and its own dedicated 14-lever signal box. As part of the same works, the main ‘’up’’ side station building also appears to have been coated all over in a layer of crème paint, hiding the stone and brickwork. Under Southern Railway ownership, concrete lampposts (not the bracket type) were erected upon the platforms, but perhaps the most interesting occurrence at the time was the opening of a ‘’Wilts United Dairies Ltd’’ depot behind the station. This was to be found on the ‘’down’’ side of the line and came into use during 1937. Connections with the SR were made at the Exeter end of the layout, and the depot was reputedly the largest butter-making factory in Europe, if not the world. The company transferred butter-making to Chard Junction from an existing factory in Trowbridge in 1939, and milk arrived and left the facility by rail. Dairy products were for long an important source of revenue for the line west of Salisbury, and depots at Chard Junction, Seaton Junction, Semley, and Sherborne were responsible for a combined output of 9,300,000 gallons of milk in 1939.

Enter British Railways. Modifications to stations along the route in general appear to have been kick-started circa-1955, with cosmetic alterations being made to main buildings. Whilst all of Tite’s two-storey-high Gothic affairs at other sites witnessed their attractive red brickwork and stone hidden beneath layers of crème paint, the situation appeared to reverse itself at Chard Junction. The plain paint scheme which had hidden the detail of the main building since at least the earliest years of the 20th Century was stripped off, exposing the red brick and stone so familiar to the route. A number of concrete bracket lampposts also appeared on the platforms – including that of the branch line – complementing the existing SR types. Thereafter, it was downhill for the station, and closures were abound in the following decade. The ball was set rolling on 10th September 1962, when the Chard branch closed to traffic. In the following January, Paddington formally took control of those lines west of Salisbury, and it was not long before the Board of the Western Region formulated plans to degrade the route in favour of its own line via Castle Cary. Rationalisation of the line included the withdrawal of local services and implementation of a semi-fast diesel-hauled timetable between Waterloo and Exeter. As a result, station closures were forthcoming. Chard Junction closed to passenger traffic on 7th March 1966, whilst freight facilities hobbled on a little longer, until 18th of the following month. Freight traffic was nevertheless still to be had from the dairy depot alongside the station; indeed, since 1957 the aforementioned milk depots were dispatching 18,000,000 gallons of milk per annum, nearly twice the 1939 figure.

Single-track working east and west of Chard Junction commenced on 7th May and 11th June 1967 respectively, but a loop was retained at the former station site to allow trains to pass. The LSWR signal box was also kept in use to operate the loop and control the level crossing gates, which at that time were still manually operated. The quaint signal cabin of the branch line had earlier gone out of use on 28th July 1964, having operated in the capacity of ground frame since 5th March 1935. The traditional level crossing gates on the main line were replaced by automatic half barriers on 14th January 1968, controlled from the LSWR cabin. At this time, the main ‘’up’’ side station building still remained, although devoid of canopy, as did the goods shed. Sadly, most of the site was levelled during September 1982, which included the LSWR signal box. The latter went out of use on 11th of that month and was subsequently replaced by a new-build panel-operated cabin. Like its predecessor, this was positioned adjacent to the level crossing, on the ‘’up’’ side of the line and came into use on 11th December 1982. The goods shed was still standing a decade later, but this, too, has since disappeared. 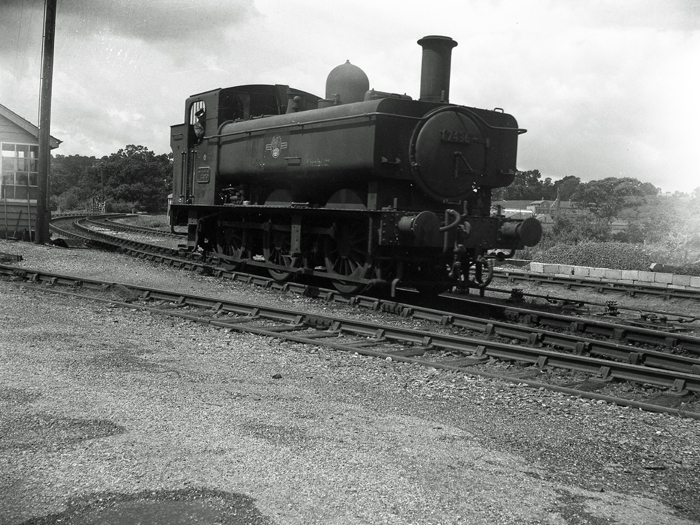 A westward view shows 7400 Class Pannier Tank No. 7436 after running round its train at the end of the branch line and about to re-attach to the carriages for a bunker-first departure to Chard. The track upon which the locomotive sits is that which led to the terminating branch line platform at Chard Junction, whilst the rails behind formed the runaround loop; the two can be seen merging on the curve in the background as the line heads to Chard. The track in the foreground, running to the left of the signal box, made an indirect connection with the "up" line of the Southern Region station via a long headshunt siding. © David Glasspool Collection 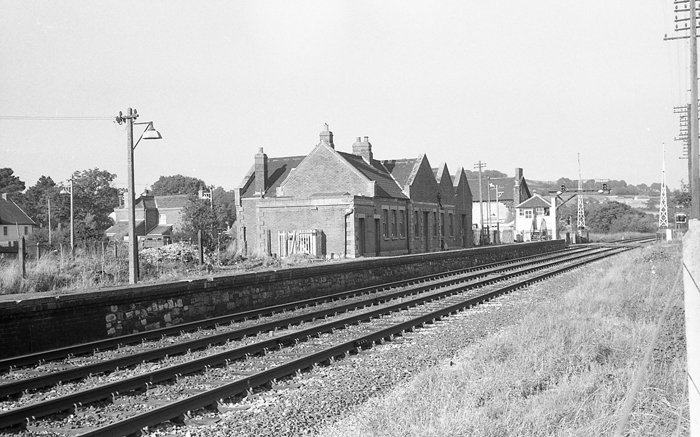 A London-bound view shows the original main building on the "up" platform, now shorn of canopy, but still in the company of lampposts with hexagonal lampshades. The remaining platform appears to be faced mostly with irregular stone pieces, with more conventional brickwork on the far left. In the background is the LSWR signal box, a standard design for the route, and the level crossing with lifting barriers. The grass in the foreground marks the site of the former "down" platform. © David Glasspool Collection 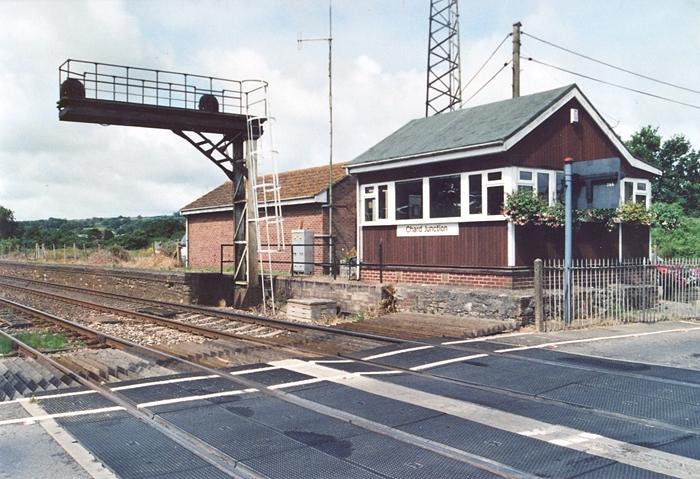 Although the original station structures have sadly been obliterated, the stone-faced platform surface still survives. The 1982-commissioned signal box exists to control the passing loop and operate the level crossing. © David Glasspool 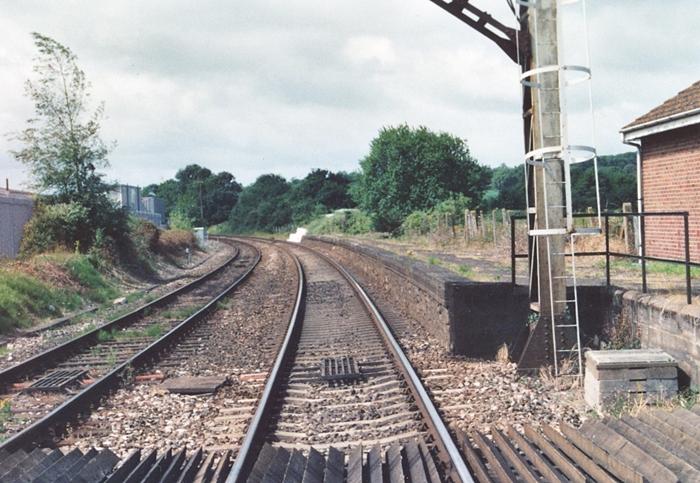 An Exeter-bound view reveals that the former ''down'' platform has completely disappeared and that the remaining ''up'' surface has seen a section cut out to accommodate the signal gantry. On the extreme left are the premises of the dairy works. © David Glasspool 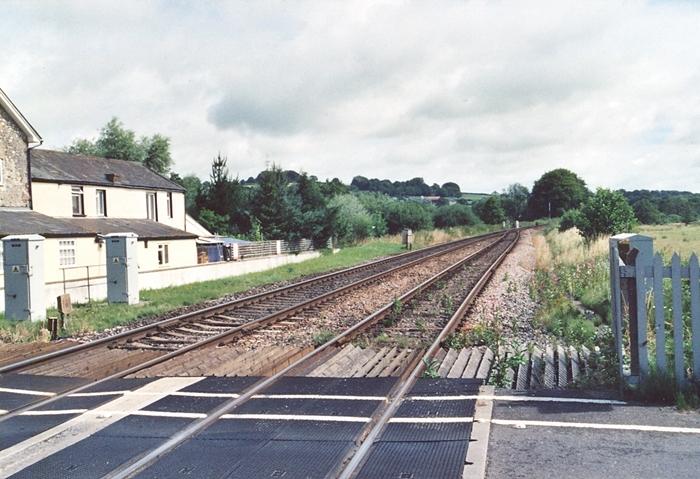 Looking towards Yeovil Junction, the passing loop is seen converging back to single-track. In February 2009, construction of a second passing loop, three miles in length, began at Axminster. As part of the works, the signalling panel at Chard Junction is set for modernisation. © David Glasspool 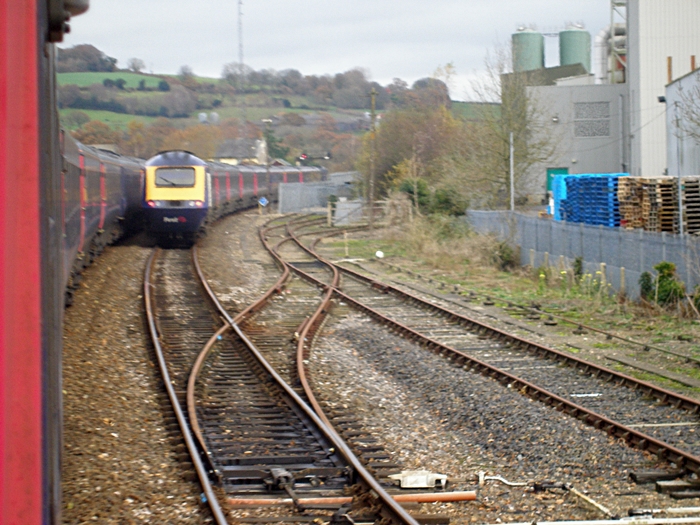 Connections between the dairy works and the former ''down'' line at Chard still remain, as evidenced in this view of InterCity 125 sets passing in the loop. This is a Yeovil-bound view from a ''down'' service, which is interestingly using the ''up'' side of the loop to pass the second HST. © David Glasspool